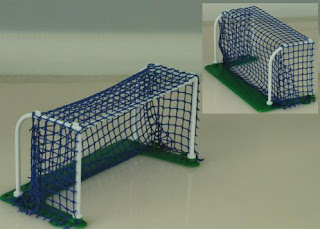 MMMmmm.....goal nets!
Contrary to popular belief, it's not all work, work, work here at EFW Towers. In between our daily, routine work of exchanging calls with Tanita Tikaram's press officer and helping football fans around Europe get tickets for various games, we do have a bit of fun. This normally takes the form of a few irreverent emeithers between friends.

Messrs Clark, Simpson and I were reminiscing today about our footballing guilty pleasures across the Atlantic (Clark is based in NE Florida). The above picture of those nets were enough to get our collective juices flowing. If you don't like those you simply don't like football. You're not human if you can't fantasise about rifling a shot into the roof of that net. I think you'd get some pretty good billowing. A billowage factor of 87%?

According to Clark, Subbuteo (oh oh oh) is very big amongst Chicago Fire fans and is a popular tailgating pre-match activity. Sounds pretty pretty good to us. 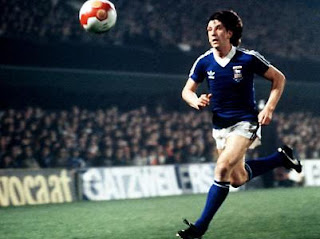 As well as goal nets and our much publicised "unhealthy obsession" with floodlights on these pages, I was a huge fan of the red and white panelled ball favoured by Ipswich Town and Manchester United (they used a Mitre version) in the 80's. There's no secret in the fact Ipswich got to UEFA Cup Finals, FA Cup Finals you name it solely because of their usage of this great ball. They were so good with it that they used to give away penalties - willy nilly - just so keeper Paul Cooper could save them - just for cheap thrills.

So do you have a footballing guilty pleasure!? A particular boot, shirt, dug out, ball or goal net make you go weak at the knees and a bit gooey inside? Come on, don't be shy, it's confessions time.

Feel free to share your footballing guilty pleasure below
Posted by Danny Last at 00:16

Ok, lets put some meat on these bones: The red and white ball in question was called a 'Stuart Surridge'. Rumour has it that Brian Clough once said to Surridge he'd use the ball in a televised cup quarter final if he gave him 5 grand!

Other guiltiy pleasures I've had emailed and Twittered into EFW Towers today:

Thanks for mentioning that ball - it was most definitely the best ever! It always looked slightly bigger and heavier than a standard ball, making goals scored with it look a bit meatier!

@Adam - good stuff mate. I actually had a plastic version of said ball in my youth.

Ski hats - as illustrated by messrs Green and "from Woking" (did Paul even have a surname?) at the Victoria Ground
in May 1989*. Why exactly did these go out of fashion as they were by a country mile the best ever genre of football headwear. Immediately after exiting club shop the excited buyer would carefully separate the twin peaks (nod to Kyle MacLachlan) to obtain the pleasing triangle effect (see Greeno and Paul). Wasn't there some minor obsession with the Scottish Premier around this time? Might have been something to do with Hammers legend and darling of page 3 girls everywhere Frank McAvennie? Whatever
it was it heralded the arrival of "half and halfers" . For example
half West Ham/half St Mirren. Never really bought into that myself. Looking at that pic again has PFW customised his ski hat by being "small badged up" on it? Genius.

* also memorably by Millwall fans at the Dell in an FA Cup game circa 1986. The effect of around 3000 Millwall loons ALL wearing ski-hats was somewhat sinister but at the same time somehow exhilarating. The very
definition of "guilty pleasure" - non?

Jonathan Taffel 05 March at 14:22
It has to be the football league ladders from Shoot magazine, which weren't ideal when you supported a non-league team. I turned the tabs around and wrote the names of the Southern League teams on the back, as I believe did many others, hence the inspiration some years later for creating this

Agree completely on subbuteo - a far, far better game than table football (or foosball as our American friends call it). League ladders were also a pleasure - although I never managed to maintain them after the early weeks of the season. My own guilty pleasure from the eighties would have to be my puchasing of several non-league club directories: it was great poring over the directions to Corby Town's ground even if one knew one would never go there. The FA Sunday Cup results were always a mystery to me too with all sorts of exotic team names like Lobster and Fareham Town Centipedes. I've got a life of sorts now thankfully.

My three main pleasures , in no particular order , are group sex parties (nuff said) , recording films about driving holidays in France for Judith Chalmers and the classified (why classified I wonder?) football results read by James Alexander Gordon. James = genius. For the full effect one had to listen on the radio - preferably on a railway platform hundreds of miles from home. The way his voice went up to signal a surprising away win (Leeds United 2 BRIGHTON & HOVE ALBION 3) , down in disapproving fashion for a careless 3 points tossed away (Bradford City 2 Brighton & Hove Albion 0) or the undisguised glee at the 3 points on his pools coupon afforded by Barnsley 2 Brigton & Hove Albion 2 was something to behold.

Thank you for reminding me about those red and white mitre balls. For some reason that mitre ball conjures up memories of Justin Fashanu's (RIP) goal of the season against Liverpool (1980?) Don't know if he scored it with a mitre or if it is my mind playing tricks on me!

As for my guilty pleasure... It was the old Radio 2 Sport on 2 theme tune that would come on at 7pm on a Wednesday night... usually followed by the brilliant Peter Jones describing the action as Liverpool or Nottingham Forest took on some side from behind a (usually fog bound) iron curtain in the European Cup.

I hear that intro and I feel like I'm a kid again... the sheer excitement of a RADIO commentary!

Can't grumble at some of these. Peter Jones in particular and that "daa daa daa da da dada da da dada" of a theme tune was brilliant.

A different ball springs to mind; those Mitre ones with the dimples on that were the stock items of many a school PE shed. They were so hard and were fully capable of giving you a dead leg.

My gran letting me stay up late to watch MOTD or The Big Match depending on who had the Saturday night highlights. I seemed to remember that "TBM" used to come on after The Professionals, so that was a double bonus. Thanks Gran.

Oh and I can't believe that no-one has mentioned that Italian word that used to mean a bit more than Rossi or Tardelli at the time: Panini.
Anyone got any swaps?

Panini , in particular in the form of Mick Coop in circa 1980 Cov City brown away kit , gets a mention of Brighton messageboard northstandchat where several other footballing pleasures get an airing. Take a look James if you have an idle few mins to spare.

Oh yes, those 'inverted lego'dimpled footballs from the PE cupboard. Our school only had one proper leather ball and that was reserved for matches and kept under lock and key in the PE teachers cubby hole.

The rest of the time it was the dimples which always seemed a size too big (size 6) and I was never entirely sure they weren't giant netballs. Either way they stung like hell when some one whellied it at you in the middle of winter!!!

Fantastic stuff chaps. Nick you should be particularly pleased with leaving those comments because as a result of clicking on your website, I've just purchased a copy of your 'Modern Football is Still Rubbish' book.

I'd walk a million miles, for one fo your goals...
MA-RI-NER!

Never mind the rest of the article, there's a picture of Paul Mariner.

And the ball had to be heavier as Terry Butcher kept heading the light ones out of the ground.

Do I win an Ipswich / Celtic bobble hat?

Danny - many thanks! Lots of common ground to this thread - although, the contributors here are much more humorous!

Very partial to a European Football Weekend myself. German football is my new poison. I follow FC St Pauli and am off to Hamburg or the Union Berlin away game over Easter. Then some mates are going to the last game of the season. We went twice last year, took in games in Koln (v 'Glabach - very scary local derby!) and Werder Bremen v Energie Cottbus (mostly for the floodlights!) Cottbus were one of the worst teams I've ever seen play. Hopeless!

Only manage one or two trips a year due to problems negotiating 'FIFA clearance' with the other half ;-)

that should be the 'contributions here are much more humorous' although, I'm sure the contributors are funny in their own right!

Thought I'd better make that clear, didn't want to offend!

As for guilty more guilty pleasures, is there anything better than the smell of Ralgex in the morning (esp. Sunday morning?)

Oi - I though I was meant to be the agonisingly funny one. But this was excellent.

this i think defines guilty pleasure. i'm guilty, very guilty of a heinous footballing crime but, at the time, it was highly pleasurable.

i've been an ipswich fan since 1972, but it wasn't until 3/4 years later that i got my first replica kit. i chose the away kit cos it looked really cool. white shirt with 3 black stripes down the left on the front.

you might be thinking that doesn't sound like an ipswich kit. you'd be right. it was a man utd kit.

went to a n*rwich/ipswich game following season. dad took me to a sports shop after where they had two kits on sale. obviously one was a n*rwich shirt, and of course i wasn't going to get that. so i got the other one. it was man u home.

a few months later i needed a tracksuit for PE at school. mum takes me to a sports shop and, well you can probably guess which tracksuit i got. but it was great. no, really. admiral - red with white and black swooping lines down the front (on most admiral shirts around that time) and continued down the front of the trackie bottoms. class.

and all the while i supported ipswich, not caring a jot for man utd.

thanks for listening - i've not told anyone this in over 30 years.