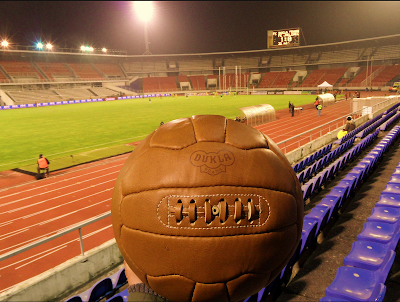 The Best Things In Life
Dukla Prague 1-3 Jablonec (22:10:11)
So, things we learnt from watching football in Prague: Slavia Prague are the big boys but Sparta Prague are bigger. Bohemians 1905 are the cool guys - saved by fans who paid off a portion of the clubs debts - whereas FK Bohemians Praha are the villains of the piece; buying out the logo and using the name Bohemians even though court cases and any rational logic and morals ruled against them doing so. But all that was small beer as far as I was concerned. The highlight of my trip was always going to be a trip to Dukla Prague.

Dukla Prague seeped came crashing into my conciousness in 1987 thanks, of course, to Half Man Half Biscuit. A trip to see them at home has been on my bucket list ever since, and all I've ever wanted for Christmas is a Dukla Prague away kit. And now, twenty four years later, was the opportunity to lay my hands on an original. Or was it...

Sadly, there was a hole in this particular bucket list. It became more of a 'f*ck it' list as news filtered through that due to the instalment of under-soil heating at the Juliska Stadium this game was to be switched to another ground in Prague. On the plus side, it might save me £100+ by not visiting their megastore. On the flip side, every time I mention that fact I've been to Dukla Prague - roughly on the stroke of every hour - I'll have to follow it up with a sorry postscript: I had to voyage to the bottom of another road to see them. 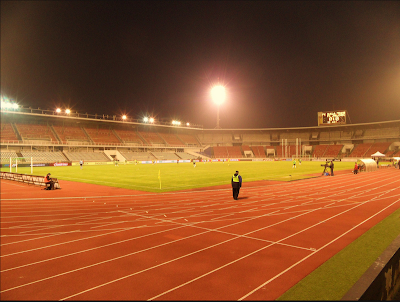 The Evžena Rošického Stadium isn't too popular with football fans. Any guesses as to why? 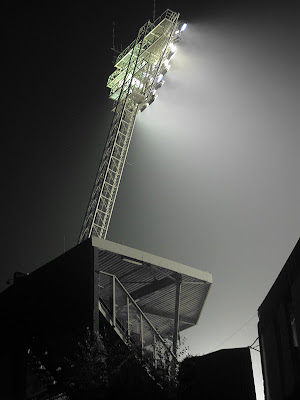 In fairness, it does have a few things going for it... 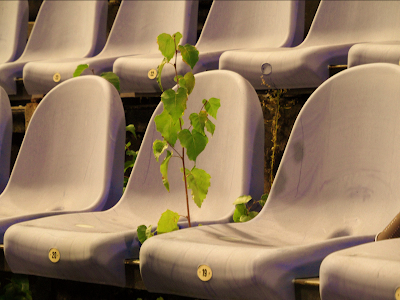 ....I mean, you don't get this at Arsenal do you?
After sticking two fingers up to modern football during the day with games in the second and ninth (ninth!) tier of the Czech footballing pyramid - three games in Prague on a Saturday is pretty much the norm if you're keen enough - it was time to swallow a Gambrinus liga sized pill and see how things roll in the Czech Premier League.

As we stumbled up the steep hill to the Evžena Rošického Stadium - one that's been used for Czech cup finals as well as being a temporary home to nine (nine!) other Czech teams in it's history, due in the main to those clubs also having under-soil heating installed - Leeds fan, Stephen Deacon casually dropped the fact he owns a Dukla Prague flannel into the conversation. He's always been a bit of a dude has 'Big Deacs' (we find out which bands he's listening to and then namedrop them at every opportunity) but, man alive, who wouldn't want to wipe away the after effects of a hangover with a moist Dukla Prague flannel on a Sunday morning?

I wasn't expecting a megastore to be honest. But surely a little trestle table would surface outside the ground? I was excited. Then, shining like the light at the end of the tunnel was, not the light of an oncoming train, but a large temporary yellow tented club shop. Woo Hoo. This was my big moment, twenty four years of hurt and all of that. Here's how the conversation went. Ahem...

“Do you speak English?” (one mustn't presume these things, I've travelled a fair bit and am all over my polite intros)
“Yes, of course” (great start, my pulse rate quickened somewhat as I tried to remember to breathe normally)
“I'd like a Dukla Prague away kit please” (I was trembling a little bit at this juncture as you might imagine)
“I'm sorry, we only have one shirt for sale, and it's the home kit”
“OK - not to worry” (I lied) 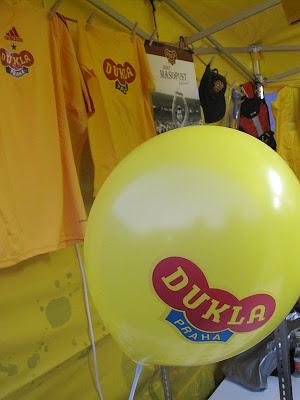 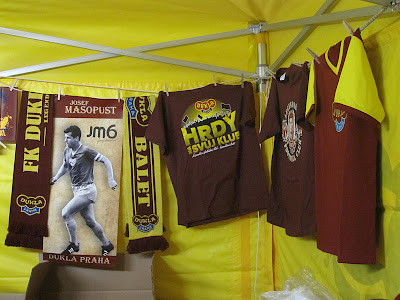 More merchandise that isn't the official away shirt, aside from that fake Toffs thing which - unless they want to sponsor EFW of course - isn't the real deal.
So that was that. Shoulders slumped and feeling a bit of a moody chops, I turned on my heels and walked forlornly towards the ticket office. Actually, the tickets were free (come again - Ed.). No, it wasn't a bogus official conducting some dodgy business. Because Dukla Prague care about their fans and were worried about the inconvenience a trip across the city may cause to their supporters, they decided that everyone making the short journey should be rewarded with free entry to the match. Not only that, the prices of scarves were slashed to a fiver for the night as a further sweetener. They sold hundreds. And good luck to them. We declared the actual steward handing out tickets to be the King of Hi-Vis. We all laughed.

Clutching my free ticket I popped back to the shop and purchased a wooden Dukla Prague yo-yo and a t-shirt for the princely sum of £10 (warning: the price of yo-yo's can go up as well as down). Cheap as chips, no? That lot would have cost £24.99 from Argos. This obviously instigated a conversation about yo-yo tricks, but knowledge on our axle, disk and twine friends isn't quite what it once was back in the playground and we declared on just the three: Walk The Dog, Loop The Loop and the Forward Pass.

Keeping two chevrons apart, the EFW team headed to the bar to sink a few pints at 80 pence a pop before making a beeline for the Dukla Prague ultras. We like a song for Europe do us EFWers; lending a small bit of vocal support to the home team is the least we can do in return for such warm hospitality. Dukla Prague have the oldest ultras in the Czech Republic. They were hastily nicknamed the 'Oldtras', and we got on famously save for the distorted noise of their vuvuzelas. Traditionally, Dukla play on Friday nights and the gates are low. But this match had been switched to a Saturday for television. Modern football eh?

There were EFW members as far as the eye could see in the main stand. Over forty of us. It was like a Radio 1 Roadshow but with no sighting of Gary Davies, mercifully. Ooh. We helped swell the gate to four figures which was 6% of the stadiums capacity (I found out that snippet in the local paper the next day. It was the only note I wrote down the whole weekend. Further note to self: be more professional in future). Jablonec (Jabbers) for their part had brought with them four skinny indie kids and their parents for support. Eleven fans in total. Poor. 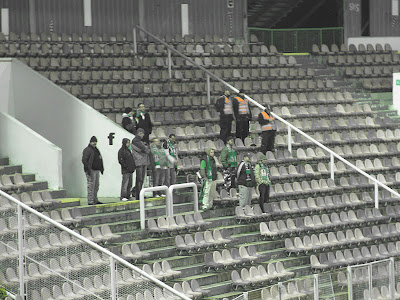 Four skinny indie kids and their parents. The green army of Jablonec "fill" the away end. 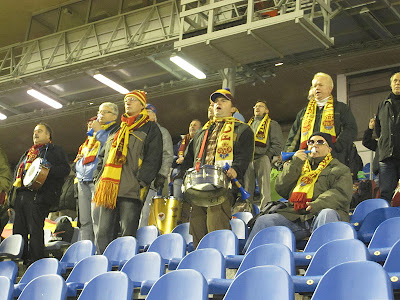 The Dukla Prague 'Oldtras'
Let's not dwell on the game. Dukla Prague kept Jabbers 14-goal hero David Lafata quiet - which was no mean feat - and even led at half time, but Jabbers stormed back in the second half and gave the Dukla fans three reasons to be miserable with goals on 53, 73 and 76 minutes. There was also 12 corners in the match according to our resident corners expert from Forest Green Rovers, Sid. Sid loves corners.

It was brass monkeys and so nobody complained when the referee peeped on his whistle a minute before the end. With an outbreak of Vitas Gerulaitis threatening, it was time to retreat to the pub. If you don't fancy mixing it with tourists and getting ripped off in Prague then head to Zizkov for your night on the beer. We opted for Pivnice U Sadu and mixed it with the locals. So, no Dukla Prague away kit, but for £20 I'd got myself a yo-yo, new t-shirt, saw the team play at last and sunk around, cough, ten pints. If you don't think that's value for money then you probably don't like European Football Weekends. 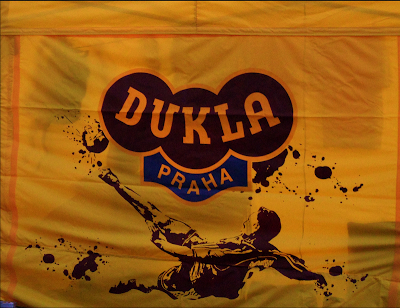 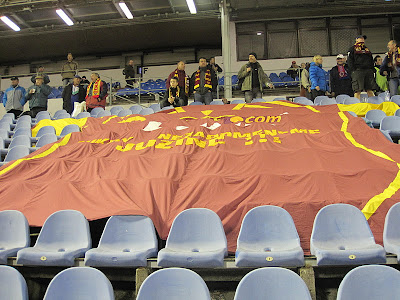 Hold on a second. There she is. Finally, draped over six rows of seats: The Dukla Prague Away Kit. You can keep your Taj Mahal, this is what I'd come to see. Impossible to get in your Easy Jet hand luggage though so it'll have to stay in Prague and, as I do every year, I'll still be able to sing, and jot down on my yuletide list of needs: All I want For Christmas is a Dukla Prague Away Kit. Cheers.
Follow European Football Weekends on Twitter
There are two photo montages of this trip set to the music of the Arcade Fire and The Stone Roses.
Previously on the EFW Oktoberfest: Slovan Bratislava v PSG, Slovan Liberec v Banik Ostrava and Sparta Prague B v Brno.
There are a quite a few references to Half Man Half Biscuit in this report. A prize to anyone who can spot them all. Do you worst in the comments section below.
Posted by Danny Last at 11:56

Email ThisBlogThis!Share to TwitterShare to FacebookShare to Pinterest
Labels: Dukla Prague, EFW Oktoberfest, Football in the Czech Republic, Half Man Half Biscuit, Jablonec

Good report, shame it did not yield a Dukla Prague away shirt. I go to Prague soon and procuring one of these shirts is high on my agenda. I may have to rethink my strategy. Or go to Honved instead.

"There are a quite a few references to Half Man Half Biscuit in this report."


Pity about the vintage away shirt. Should have nicked that flag though, that's quality.

Come on, Webbie - it's a simple task. How many HMHB tunes can you name in this report? If ever there was a challenge with your name on it....

@BruiseLee - Good effort old chap, but there are more than nine.

I've just tweeted our fellow HMHB aficionados to see how many they spot/counted.

Fredorrarci and Juliet Jacques:
Post your answer in these comments on NOVEMBER 3RD at or around 5PM GMT.

How many I count depends on:

-- duplicated references counting as one reference;

-- the use of the word "twenty-four" not being a reference to "Twenty-Four Hour Garage People" (that would just be evil);

-- the very mention of HMHB counting as a reference.

With this in mind, I thought it wise to say that I count 13.

I had a hard twelve and a maybe thirteen.
Like you I wasn't sure if we counted twice or not.

Come on Mr Last, set the rules properly next time !

Right, first things first - this was just a bit of fun so don't get all mardy bum.

All I Want For Christmas Is A Dukla Prague Away Kit

The Best Things In Life

Reasons To Be Miserable (part 10)

Friday Night and the Gates are Low

Voyage to the Bottom of the Road (album)

I MISSED "LET'S NOT"!!! Do you know how this makes me feel, sir? Have you no compassion in you?!

did the Chigley skins turn up ?

There is a, seemingly, official Prague foooie souvenir shop near to Betlemske square - mostly Sparta stuff off course but I did buy my kids a 1905 t-shirt. I can check next time for the Dukla away kit....

sorry that's "footie" and "of course"