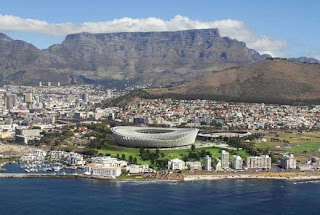 Previously Plucky Pyongyangers
Here's the fifth instalment of Tim Stewart's World Cup Journal which is taking the country by storm:
Greetings all,

Slightly surreally, I have just watched a Korean national team lose for the third time in six days.

It resulted in the biggest scoreline I have witnessed live as the previously plucky Pyongyangers shipped seven to Portugal.

The world's greatest flat-track bully, Cristiano Ronaldo, was in his flouncing element and you had to feel sorry for the hapless North Koreans by the end.

They still have to face Didier Drogba but at least their countrymen will probably be reading about another famous victory tomorrow.

Cape Town's Green Point stadium looks magnificent from the sea, as I discovered on my way to Robben Island on Sunday.

There, I encountered penguins to add to my dolphins nature watch. You can apparently also be lowered into the water in a cage to view sharks but I find the prospect about as appealing as watching England again.

The one remaining Tues/Wed flight to Port Elizabeth for the impending horror show - a 4.45am take-off with budget airline Mango - has rocketed to nearly 200 quid.

I shall therefore be doing the world-famous Garden Route to Port Elizabeth instead - by bus and in the dark. It is a 12 hour plus overnighter and I have no accommodation yet on arrival.

All this is small beer compared to England fans who have given up their jobs to follow the team because they could not get time off work and will be signing on after the Premiership primadonnas' tournament exit. Wayne Rooney would do well to reflect on that next time he is upset by a bit of booing.

The big local news is that another South African budget airline, Kulula, will be flying a dog for free during the World Cup. They offered unlimited flights to Sepp Blatter after annoying the FIFA bigwig with their advertising, not being an official sponsor. He ignored the offer and the dog's owner changed his pooch's name, pointing out the airline had not specified which Sepp Blatter could take advantage. Only at the World Cup...

Bafana Tim
You can read more of Tim's World Cup Journal HERE
- Feel free to comment below -
Posted by Danny Last at 23:17