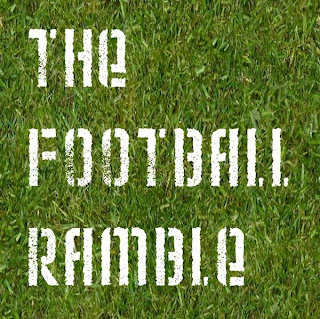 Hooooooo-way the Lads!
Surreal brilliance and an antidote to the glossy, predictable and sycophantic outpourings from some of the more established sports media. No, it's not another Guardian review of European Football Weekends - this is what cool cats are purring about the Football Ramble. The podcast, website, Facebook Group and Twitter feed that fans are lapping up in their thousands.

The multi-award winning podcast is presented by Fulham fan Marcus and features three other lads; JamesorJim (Arsenal), resident Geordie Pete and Portsmouth fan Lukey Moore who EFW had the fine pleasure of meeting and interviewing:

A bulging trophy cabinet full of awards and record amounts of listeners. It's all going rather swimmingly for you chaps right now no? - Haha, that's very nice of you to say so. We're enjoying making the show, and it's great when people like it so much that they tune in every week. The awards are great as well, but they're obviously not the reason we make the show. That said, it's flattering and encouraging when you win them; it means you must be doing something right.

Be honest, how often do you check to see where the Ramble is in the itunes chart? Haha! I undoubtedly check it more than the other boys, I'm always keen to find out where we are. The other chaps are bored to tears when I email them every day saying 'We're 4th in the Sports charts!' or 'We're 34th in the Podcast charts!' I'm sure, but then to be fair I get bored when Pete emails me a load of photoshops of my face on farmyard animals, so it's tit-for-tat.

How does the Football Ramble differ from Football Weekly and TheGame podcast from The Times? - I don't actually listen to The Game anymore, so it's hard to say. But we're different from Football Weekly as far as we're not as serious; we try to be more of a celebration of football than an authority on the game. We clearly don't have the contacts within the game that they have, and we're not going to beat them on breaking transfer stories or news. We're more about the entertainment value (I hope). 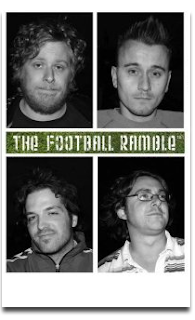 The Fab Four: Luke, Pete, Marcus and JamesorJim.
Is there a simmering rivalry between The Ramblers and Football Weekly team? Not at all. We're all big fans of their work, and we wouldn't even be making a show if it wasn't for James Richardson's Gazzetta Football Italia. He greatly inspired us. I know that at least one of the FW boys listens to the show as well because he tweeted me correcting me on some factual error not so long ago. Also, we were going to sort a five-a-side game out with them at some stage, but it's not happened just yet. We're all so busy. Maybe we'll make it happen after the World Cup. Failing that, I'm sure we'll go for a beer instead.

You've all got full time jobs, how much time and effort do you put into the Ramble each week? A lot. More and more these days. We're doing a lot of stuff for the World Cup build up, and we also have to meet/email/phone each other all the time to make sure we all know what we're doing etc. Then there's the website which can take quite a bit of time. Yeah, quite a lot.

It is still a lot of fun though eh? - Of course. I'd never complain about it. We're busy because the show is popular. It's important to remember that, I think.

Hats off for getting Kenny Pavey (the modern day Robin Friday) on the show. What was he like? Yeah, he's a good lad. A nice fella as well. I'd hate to play against him, he'd be terrifying.
Which other players have you had on? Er, we've had a number of players and managers do little idents for us. In terms of actual interviews, just Dean Windass I think. Our type of show tends to rule out having a load of players on though. We think about getting them on and then realise that we'd probably just take the piss out of them for ten minutes and they'd inevitably get pissed off. It's best that we're outside of that circle of people, I think. That way we can be more objective. Having said that, Marcus got Joe Kinnear to do an ident once. He only had to say his name and 'you're listening to the Football Ramble' and he kept forgetting it. It was hilarious. Poor old Joe, he's not the brightest.

You like to pull a few stunts on the show, any that stand out? We sent Jim's hair to Peter Kenyon when he was Chelsea Chief Exec. He didn't reply. Other stunts tend to revolve around Pete bullying me. Over the last six months he's punched me in the bollocks in an airport departure lounge in Barcelona in front of about 200 hundred people, put my phone down his boxer shorts, and taken a picture of me half-naked and put it on the internet. And those are just the ones I know about. He comes across as a lovable, cheeky joker when in fact he really is an awful human being.

Tim Lovejoy is a God discuss.. - A God of what? Haha! Seriously, every time I do an interview with anyone, Tim Lovejoy gets brought up. I have no idea why. He's a terrible football broadcaster and comes across as massively arrogant. I don't actually know him, though. I'm sure his Mum loves him and loves washing his Watford and Chelsea shirts when he goes to visit her.

Has it always been hunky dory at Ramblers HQ or have you had any fallouts? - We have disagreements all the time, about what should go in the show and what shouldn't, especially. But in terms of personal fallouts, no. We're all pretty reasonable people, I think. Either that, or the other three are just amazingly tolerant of my outrageous demands. But I'm hoping it's the former.

Have you had any criticism from listeners about aspects of the show? - Yes of course. People email in from time to time saying we're wrong on a particular issues, or that we've got a fact wrong here and there. That's all good though, I'd rather someone emailed in and told us than just kept quiet. Otherwise we'd go through life thinking we're right all the time. Which is obviously not the case. Oh, and there was that time when you told me that you thought the Hall of Fame/Profile feature was 'boring', Danny. Don't think I've forgotten that. Let it be known that agreeing to do this interview after that jibe is a measure of how reasonable I am. 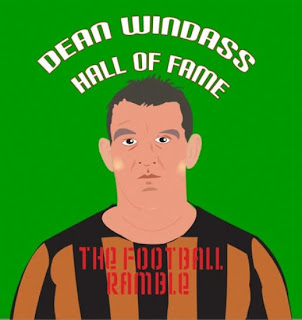 Did I really say boring? I was just keeping you on your toes. Will this do to make up for it?
You interact with the listeners on Twitter and Facebook which is great. How much correspondence do you get a week? - I'm not sure, but it's a lot. We always try and reply to emails, JamesorJim looks after that and he does a great job. I think we get something like 700 interactions a week on Facebook and then there's the Tweets and the emails on top of that, so it's a lot, yeah. Again, this is a good thing though. So no complaints from us there, either.

You're off to the World Cup. I'll say that again 'You are off to the World Cup' You must be like a dog with two appendages? - Yeah, it's pretty amazing. We'll be out in Johannesburg for the final. I've not been to a World Cup before, so it's something I'm really looking forward to. I hope it's a tournament that's remembered for footballing reasons, rather than something unsavoury.

How much output can we expect from you lads during the tournament? Oooh, lots of blogging, videos, Rambles and things like that. I am sure we'll think of lots of other things to get up to while we're there, too. We could do a webchat or something. I don't know, I'm making up as I go along. But definitely the first bit, the blogs and Rambles and videos; we're definitely doing those.

Pete spins the wheels of steel at XFM and you're known for your musical taste as well. What should we be illegally downloadi....sorry, where should we be spending our itunes vouchers these days? - Am I known for my musical taste? Is that actually true? Probably not. (check out Luke's personal Twitter feed for the truth. New Pornographers this and Band of Horse that - Ed) this However, at the moment I am chiefly listening to Japandroids and Syd Barrett. Separately. They never did a record together, to my knowledge. They're both great though, and The Madcap Laughs by Syd Barrett is the best summer album ever.

Can you recommend a good place for a *ahem* European Football Weekend? Barcelona is a great one, but you've probably already been there (yep - Ed). Other than that, what about Portsmouth!? No, hang on, wait, come back....

And finally, The Ramble all started in your kitchen. Where will it all end? - We're not going to stop until one of us is Prime Minister, one is presenting Match of the Day, one has a knighthood for services to LOLS and Pete has learnt how to tie his shoelaces. 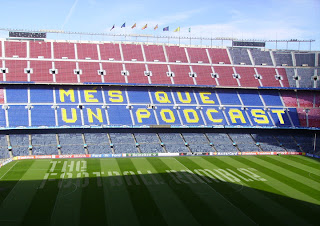 Great interview, thanks! Interesting to read a bit more about the Ramble, it's a great podcast. Hooooooo!

Best pod-cast around by miles, highly recommend it to any football fan.

Thanks for outing Mr Marcus Speller as a Fullham fan! Great interview. And err Hoooo!

Ooooooooh, it's a lovely little interview!

Excellent interview, Danny. No wonder you're my Facebook friend.

I say interview, cause that's what it is!

I'm commenting because I'm scared not to

My word. Lots of weird and wonderful comments there.

The Dave from above is Mr Roberts by the way, author of Bromley Boys, a book everyone should read. That and Tim Parks 'A Season with Verona' which I'm currently absorbed by.

That was amazing. Will you be my new best friend?