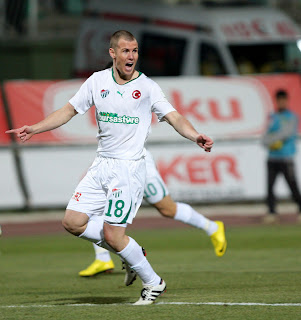 Oh, my God! We've got Kenny.
Konyaspor 0-0 Bursaspor (23:01:11)
Ulas Gürsat continues his brilliant weekly column for European Football Weekends. Ulas is a football reporter for the Turkish daily Haberturk Newspaper and was on hand to witness Kenny Miller lack punch on his debut for Bursaspor:

The Turkish Super League is back from a mid-season winter break. Once again I was on the road with current champions Bursaspor for their long trip to Konya, in the Central Anatolia Region of Turkey, to play Konyaspor in the Konya Atatürk Stadium. Of course the "Atatürk" Stadium. A popular name for a Turkish football ground, no?

The media circus was in full swing because of the £400,000 signing of Kenny Miller from Rangers to Bursaspor. Kenny's debut was to kick off in bizarre fashion.

Before matches in Turkey, the fans have a tradition of calling out their favourite players name during the warm up. The player in question then comes to the front of the stand and punches the air three times. The fans respond with cries of "Ole, ole, ole," Kenny didn't answer their call. He didn't have a clue what was going on. The fans had to call for team captain Omer Erdogoan to get Miller to go to across to them. He explained the procedure and Kenny responded, punching the air three times. We all laughed.

Konya isn't a real football city. The locals don't seem to care much for their team. The Anadolu Kartalı (Anatolian Eagle) very rarely fill their 22,000 capacity stadium. They've got just one main fan group called Nalçacılar which means, erm, actually I don't even know. Answers on a postcard please.

Around 600 Bursa fans made the six hour journey by coach. They probably wish they hadn't bothered. 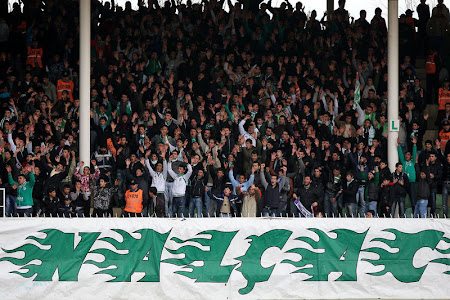 The Nalçacılar of Konya. Whatever that means. 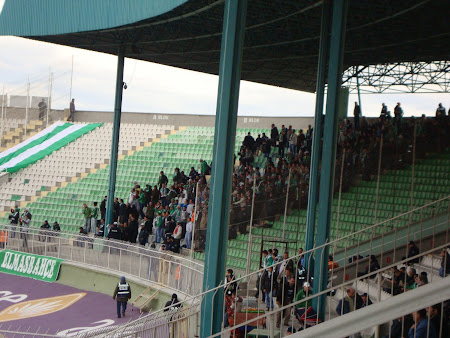 Six hours for this? The Bursa fans question their loyalty. 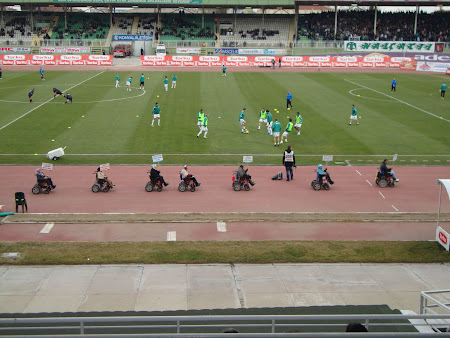 Another tradition in Konya. Fans in wheelchairs hold up signs declaring 'We used to be like you' - they do it before every game. They want - not unreasonably - to be treated with respect by the rest of society.
The game itself was turgid. It finished 0-0 and Kenny Miller was only brought on for the last twenty minutes as Bursa threw everyone forward. He barely got a touch. Frustrating. Before the game, even the Konya fans were intrigued with him and chanted his name as he departed from the bus. What must he have made of his first week in Turkey? Mobbed at the airport by a media scrum, and fans, thousands of whom also turned out to welcome him at the stadium.

Miller was attracted here in the first place because of those fans and the club. Either that or the mentions of "irresistible offers", "lucrative contracts" and "£50,000 a week". Not sure which. There will be no hiding place for him here, but having played for both Celtic and Rangers, will that bother him? Who has the more passionate fans - The Old Firm clubs or those in the Turkish Super League? That's one for the comments section I fancy.

So what of the local food in Konya? May I be so bold as to recommend two things. First up is the Konya Firin Kebap (Konya Oven Kebab). It's a young lamb cooked in the oven. Turks don't like to consume old lamb. They usually eat them when they're no more than a year old. This is served on pita bread and it's more than delicious. When I say kebab, that's not a Doner kebab in bread. There are hundreds of types of kebabs in Turkey. 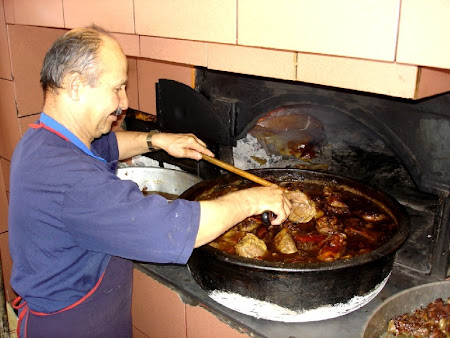 A Konya Firin with all the trimmings please my good man.
The other thing to eat in Konya is of course the Etli Ekmek (Meat Bread). It's a speciality of Konya and a bit similar to a Turkish pizza called Lahmucun. It's basically mince or meat on a long thin bread and you simply have to try it. When you order a Etili Ekmek it comes in at just under two metres (two metres!). But don't worry, you'll eat it all. 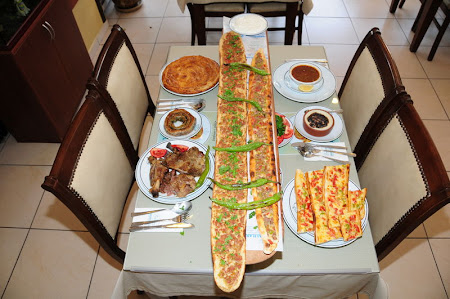 Roll up for two metres of Meat Bread. (Where do we sign - Ed.) 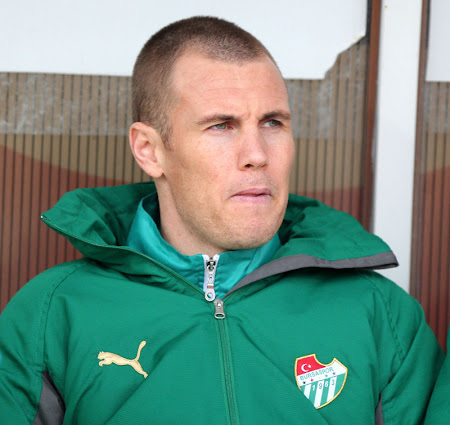 Note to self: three punches and a goal next time. Simples.
Meanwhile, back in Bursaspor, Kenny Miller makes his home debut against Galatasary next Saturday. Remember Kenny: punch the air three times before the game, score us a goal and you'll be a fan favourite for ever. And you can keep the 50 grand a week. Sağlığınıza!

Are Turkish fans more passionate and vociferous than their Scottish counterparts? What do you make of Kenny Miller and his move to Turkey? And hands up who is up for a two metre meat bread. Feel free to comment below.
Posted by Danny Last at 10:10

@Dan Absolutely true. The real story here wasn't Kenny Miller at all was it? No, it was the fact that we now know two metres worth of meat bread is available to buy in Turkey.

They can fully expect an upsurge in tourism now, I fancy.

Join us next week for more European Food Weekends.