The highlight of my career 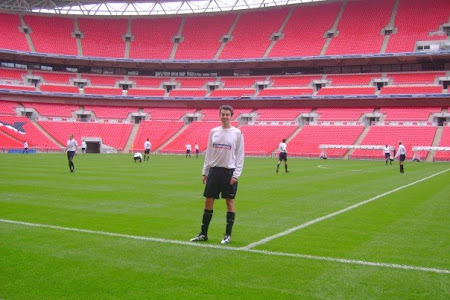 Email ThisBlogThis!Share to TwitterShare to FacebookShare to Pinterest
Labels: Highlight of my career

Found a picture of one of my two highlights, and it isn't the one from Wembley! http://goo.gl/BSJjH - (l) Jennifer Walcott, (r) Suzanne Stokes and me looking very happy in the middle

The scene was a 7's team in disarray. The manager had dropped regular players in favour of "superstars" from a slightly higher level. So moral in the social spine of the team was low.

Some of the old crew quit (and I eventually did) but not before one special match.

Being extraordinarily unfit, after continually falling out with the manager I had to settle for rare sub appearances. Maybe he was right given my fitness. But I was finally given a start (we were short - 1 sub only)

The first goal was something maybe Ljungberg would be proud of - bursting into the box from the left and slotting into the far corner.

The second a sheer wondergoal - dribbling past 4 players before dummying and going round the keeper.

The final was merely a tap-in, but it didn't matter. I bagged the hat-trick to make it 3-0. Exhausted, I'd proven my point and signalled to the bench that I couldn't continue. And I left the park to a standing ovation from the astonished 3 people and a dog who were watching.

Apologies for length and smugness.

Getting booked for talking on a mobile phone during a game. Ref said it was for ungentlemanly conduct. Had to pay a fine of £6.

Has to be playing Carlisle United at Brunton Park for a Northern Alliance Prem side; Michael Bridges was simply supreme as they crushed us 7-2, and I'm not ashamed to say he megged me beautifully before chipping the keeper for one of those goals! :)

I did get a mini revenge later in the game by megging Karl Hawley though, so I didn't leave the ground feeling completely useless ...

Not really one to cover myself in glory but, it happened in secondary school for me during PE on the school's football pitch.

The ball hit my spectacles (I am short-sighted) and a part of it was dented. The damage the ball has done to my spectacles was not serious but, safe to say it has got me be careful of playing football ever since. Sort of like my own Petr Cech moment, but definitely less serious.

Still not sure who was it who kicked the ball to the extent it managed to hit my spectacles. Not that I am 'pursuing' the culprit, mind.

Some great highlights here. I like the nutmeg based ones. Something liberating about the passing of a ball between someone's legs.

I've never nutmegged anyone and hence my highlight, being 'done' by a pig.

I shall endeavor to find the clipping that marked my career highlight and pass it to Danny.

I tackled my own teammate on the edge of the oppo box in an exhibition game at the Millennium Stadium, so desperate was I to score - got an assist though so he couldn't complain... much!

My bessy mate at the time was a mini George Best, boy could he play.
It was a a school under 10's match and I was full back on the opposing side. Before the game I saw a poster on the classroom wall on how to do a perfect sliding tackle. "Right" I thought to myself, "I'll do that".
So in the match as expected here comes my mate charging down the pitch with the ball with only me (and the goalie) to beat.
I stood my ground watching and waiting to execute the move when he looked up, stopped for half a sec and then gave me the ball.
"Here'ya mate." he said and then turned and trotted back up the pitch.
I then hoofed the ball back into the opposition half and never got a touch for the rest of the game.

Two highlights for me. In what can only be described as a massive coincidence both happened to be captured on film and are available to relive on youtube:

1. Volley whilst playing for Oxford United fans team at a tournament organized by Leyton Orient fans and against Queens Park fans. The fact that the Scottish opposition had been drinking all day and the keeper wasn't wearing any gloves is, of course, irrelevant. Peter Schmeichel wouldn't have kept this one out.

2. Also, for the Oxford fans team when we got to play on the Kidderminster Harriers first team pitch at Aggborough and use all the facilities. A great day, we won the game 4-3 and I opened the scoring with a penalty.

First ever match in an organised league. Aged 8. We go 1-0 down. Ball falls to me on the edge of the box. I beat a man, and hit an unspectacular shot with my (weak) right foot which somehow finds its way past the opposition goalkeeper.

We won the game 11-1. Over the next 8-9 years I won leagues, cups, and played in tournaments in France and Holland, but nothing ever beat the joy of that first goal.

played maybe 15 years for old elysians in the afa, no highlights, no ups just losing.my names gary and the only thing i can say was it was kinda fun. scored a goal once from a free kick on the half way line gainst ealing association.