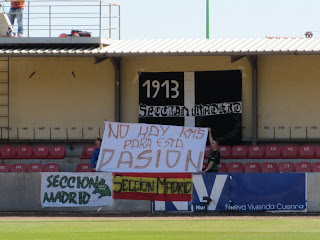 - click on photos to enlarge image -
If I was to live in Spain on a permanent basis at my in-laws, then UB Conquense would be my local team. They play in the town of Cuenca, an hour away from my Spanish HQ in the village of Salinas del Manzana, Castilla-La Mancha. Evidently, supporting your local team isn't all the rage in Spain. Two thirds of its football fans support either Real Madrid or Barcelona and judging by the press coverage out there, it's as if no other teams exist.

Money is too tight to mention here as well. The recession has left both the clubs and the fans skint. Watch a round up of any Spanish football games and more often than not, they're played out against a backdrop of a half empty stadium. Only the very committed or mad go out to watch Third Division football here nowadays. I fall into both of those categories. I say Third Division, it's actually called the Segunda Division B, Group 2. A regional-ish Div 3 which is split into four groups.

Cuenca is famous for its culture, natural beauty, free tapas and wild fiestas. I like it so much I chose to get married here in 2005. The football team must be one of the remotest in Spain. A "local derby" for UB Conquense would mean a 330km round trip to Rayo Vallecano to the west or a 550km return to CD Castellon to the east. Locals are convinced referees conspire against them as they have to travel so far to officiate in their matches.

After a couple of days in Madrid, my wife and I travelled to this match by coach. Unless your route is covered by the AVE train (fast but expensive), coaches are the best way to negotiate Spain. That is if you can put up with the constant 80's tunes that get pumped out on the radio. If you thought you'd heard the last of Glenn Medeiros then think again. Nothing is going to change my indifference to him.

Calle de San Francisco seemed as good a place as any to kick off our pre match duties, what with it having 9 (nine!) bars in a row and all. Just round the corner from there on Calle Alfrerez is the El Quinto Pecado (The Fifth Sin). Presumably named as such due to the fact they were showing the Grand Prix live on the telly rather than the huge plate of paella they served us up for free with our cold beers. Talking of tapas, our next port of call - La Bodeguilla on Calle Fray Luis de Leon - has the best free tapas in town. A plate of quails eggs, jamon, salad and a couple of glasses of Consomé anyone?

With beer and food like that on offer in town, it was no surprise that only 900 of us made our way to the match. After paying 10 Euro to get in and walking past the UB Conquense Megastore, we meet up with a couple of friends in the clubhouse. 1 Euro a beer in there as well. Supporting your local club isn't so bad is it? Bizarrely, handball is more popular in Cuenca than football. A crowd of 1,900 had pitched up the night before to see those guys in action. 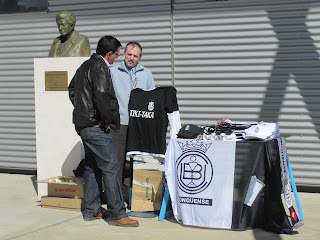 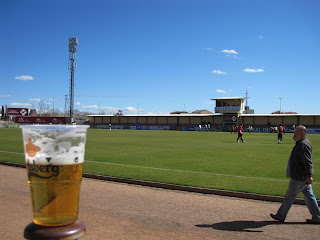 Are you looking at my pint? 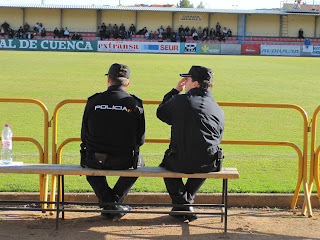 Pst, Paco, are we on double time for this? Easiest job in the world (tick). 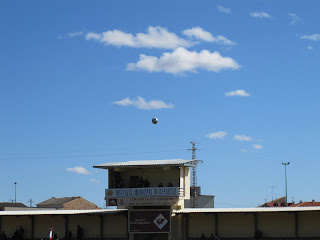 Give us our ball back.
Onto the match and the first thing to note was that 2 (two) away fans had bothered to turn up. In fairness to them they sang their hearts out for the first twenty minutes. A couple of passionate lunatics they may have been but good value all the same. The local Conquense ultras numbered around 30. They didn't have too many songs but then you try shoe-horning Union Balompedica Conquense into a little terrace ditty. I sat with them for a bit during the second half. The guy with the microphone was more interested in cracking funnies than starting songs.

Within three minutes of the start, the home side had been reduced to 10 men and had a penalty awarded against them. Those conspiracy theories I'd heard beforehand weren't too far removed from the truth. Raul (of course Raul) scored from the spot and within 180 seconds I'd learnt myself a whole host of new Spanish swear words and insults. The two away fans weren't bothered though. Best day of their lives.

Back in the bar at half time, the locals were busy taking the piss out each other and cracking funnies at every opportunity. I love football at this level. Nobody takes anything too seriously and having a few laughs is deemed more important than securing three points. With our half time raffle for a leg of ham unsuccessful, we ordered a couple more beers and some cheese and headed back out for the second half to pay fromage to our heroes. Actually, cheese = queso in Spanish but why let language get in the way of a good gag? 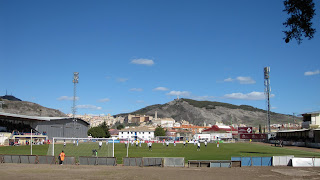 Lovely day for it. 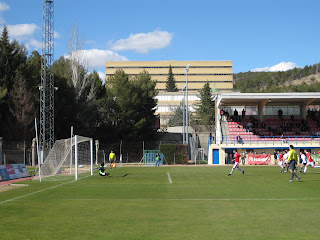 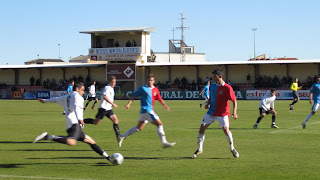 Santaugini swings in a cross. 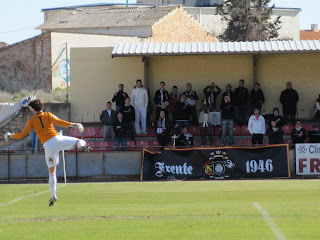 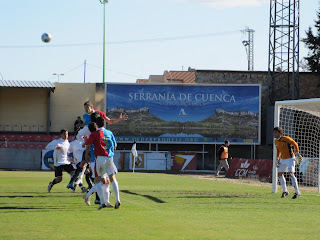 The Worlds tallest defender?
Within 60 seconds a catastrophic defensive error in defence allowed Raul to score his second for Racing. Am I allowed to say that the Spanish defenders got caught napping in the mid afternoon sun? We (I was now a fully fledged local) did manage to pull one goal back but the referee assured us that was all we were allowed as he'd had to travel from Valencia for this match and was non too plussed.

Bob Dylan had played a gig at this stadium a couple of years previous to rave reviews. The locals had turned out for that one in force. My cousins, who were going to join me for this game, chose instead to take advantage of the first day of the fishing season. It takes a lot these days to get Spaniards into a football stadium for a game that doesn't involve Real Madrid or Barca. Support your local team? Quizas, quizas, quizas...... 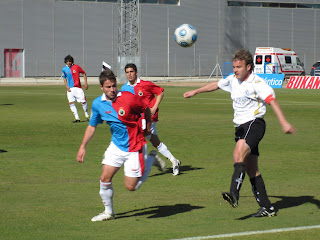 My man Cristian Soriano. UB Conquense's best player AND he owns a bar in town. 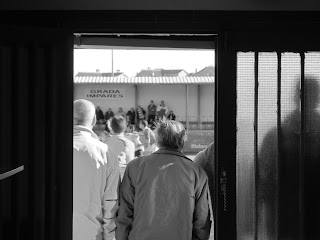 The view from the bar... 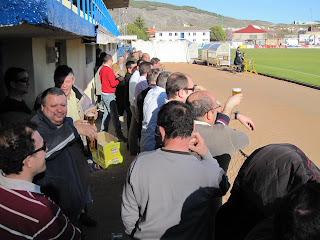 ...taking of which - beers all round. Salud! 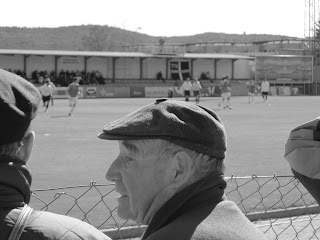 I remember when this was all fields.. 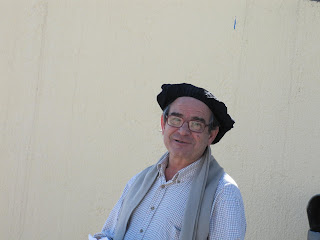 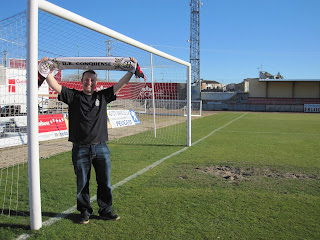 Marred by an EFW pitch invasion at the end.

Cuenca pano. Click to enlarge if you've nothing better to do.
* (There are not enough kms for this passion)

Email ThisBlogThis!Share to TwitterShare to FacebookShare to Pinterest
Labels: Football in Spain, Racing Santander B, Segunda Division B, UB Conquense

Cheers Panos! We always have fun and we nearly always take care ;-)