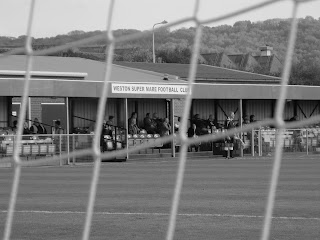 Weston-Super-Mare 3-2 Lewes (17-10-09)
- click photos to enlarge image -
A 400 mile round-trip by train to Weston-Super-Mare (or WSM as it should universally be known) to see two teams placed 22nd and 23rd respectively in the Conference South. An act of madness or one of inordinately sane men!? Who would partake in such a journey!? Hi ya.....

Cynical Dave and I set off at silly o'clock from Brighton with our old mate; chief sports hack for The Observer: Paul Hayward (who was en route to Villa Park for the Villa/Chelsea match) and we were joined by Passport to Football's Stuart Fuller in London and Forest Green Rovers fans Shep and Witty at Swindon. There are no shortage of takers when it comes to following The Rooks on the road. Glory hunters us!? Are you 'avin a bubble!?

Those who ticked the 'act of madness' box in the first paragraph might want to reassess their answer now because ladies and gentlemen; on this sunny October day, we'd hit the WSM entertainment jackpot. Our arrival had coincided with Superstar Wrestling at the Winter Gardens (tickets £10, suitable for all the family), a book sale AND a freecylcle event in nearby Winscombe. It's like a car boot sale but Freecycle items are FREE (FREE!).

As if that wasn't enough, what's not to like about the world's largest helicopter collection -available for your viewing pleasure (£5.50) - at the towns Helicopter Museum? It's no wonder that this seaside resort is such a popular UK holiday destination. Despite these embarrassment of riches, the main attraction for the EFW team prior to the match was a quick pub-crawl around the seafront followed by a visit to the clubhouse at the delightfully named Woodspring Stadium. Beer is best after all.

So after beers in the Three Queens, White Lion and the Tavern in the Town - whereby the average age of the clientele was around eighty two - it was time to drink in the atmosphere at the clubhouse at the ground. WSM has its own version of the London Eye on the seafront and on a clear day you can see all the way to the industrial state that we spent a good forty minutes walking through to get to the ground.

The clubhouse contained the following: retro style football pennants from every team you can think of, board and committee members complete with smart blazers and red noses and 2 x skittles allies. Sadly, it also had a morose atmosphere, the like of which hasn't occurred since Lady Di met her untimely death in that Parisian tunnel. WSM fans have deserted their team in droves. Shame really.

Inside the ground - which is has to be said is largely soulless - the match which one might have expected to be scrappier than Scooby Doo's irritating nephew was about to unfold. It actually turned out to be an unexpected five (five) goal thriller. The only predictable thing that materialized was the home sides savage treatment of Lewes play-maker David Wheeler. He ended up being carried off with leg-knack after one meaty challenge too many. 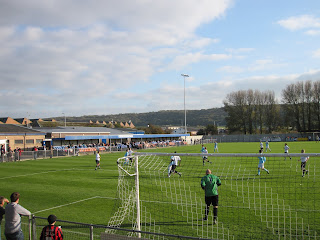 The Burnley of the south? 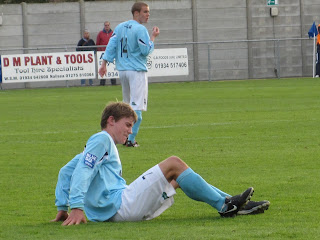 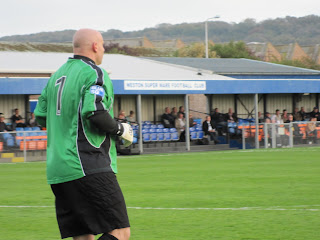 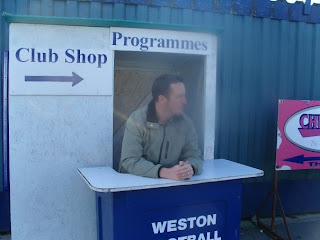 I land my dream job. 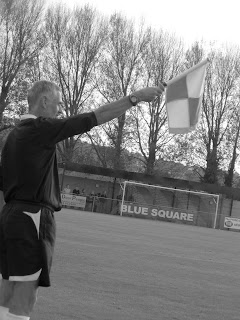 It is my duty to report that WSM cheated a little in the build up to this match. They signed Dave Gilroy on loan from Newport County a few days beforehand which meant that technically -it wasn't really fair sides. Gilroy helped himself to a predictable hatrick. UEFA are of course set to investigate. If we could all go around signing Dave Gilroy willy-nilly before matches then we'd win every week obviously. Where is the joy in winning with him onboard? He is too good.

Lewes did shoot themselves in the foot (ouch - Ed). They left the only chap who knows where the goal is (Crabby) on the bench and sitting next to him was one of the few chaps who knows how to set up goals/provide fans with value for money/talk about Chelsea for hours -Ryan Storrie. They did eventually come on and The Rooks started to dominate as a result but it was too little too late. 2 x starting places for next Saturday please Mr Ibbo.

After some on the pitch shenanigans the EFW team decamped to the bar for some consolation bevingtons. Three goal man and illegal loan signing Gilroy made up for breaking our hearts by joining us for a photo as did Seagulls gaffer Andy Gurney. Over a polite beer or two, Shep and I discussed next weeks EFW Oktoberfest, Mr Fuller told us how he's been on/contacted by ITN, BBC, Sky Sports, Talk Sport and CNN this week to chat about his book and Witty told us how he used to physically wind up and then down the Forest Green Rovers floodlights in days of yesteryear. Cynical Dave!? He sat and made cynical comments about the Premier League (no change there then - Ed).

I don't know what they put in the beer in WSM but our train back to Bristol afterwards was jam-packed with drunken revellers. It was as if the Chatsworth Estate had organised a day out. For once we were the most sober people on the train - honest guv! Shep and Witty alighted the train at Swindon for a night on the ale, Mr Fuller was dispatched in London (before heading off to Denners for a feast of football) and Cynical and I were left to talk nonsense for a few hours before arriving back home 20 hours after we'd left East Sussex.

So no points (again) but another great day out. Next up? The much anticipated inaugural European Football Weekends Oktoberfest. Thirty-two of Europe's finest descending on the Netherlands and Germany for three days of football, laughs and the odd beer. What, dear reader is not to like!? Cheers. 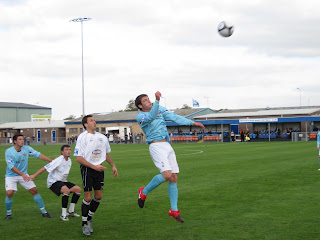 Form an orderly queue for the header lads. 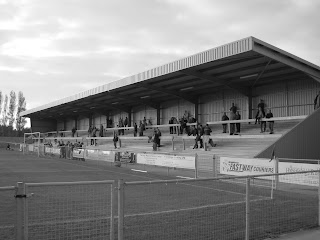 Packing them in at the Woodspring. 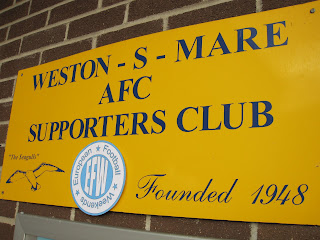 They've waited 61 years for this moment. 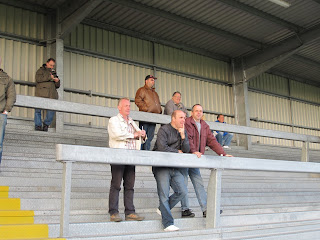 Fuller at the back (working as usual) and from L-R Cynical, Shep and Witty. 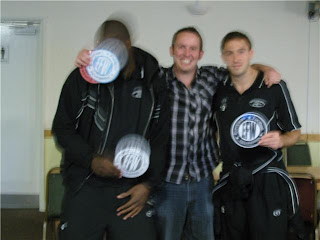 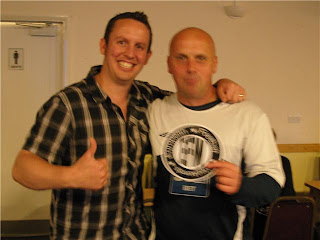 For The Ball is Round version of events CLICK ME.

For more photos of the day CLICK ME.
- feel free to comment below -
Posted by Danny Last at 16:03