Saint Peters denies EFW our first 'Smash and Crabb' headline of the season. 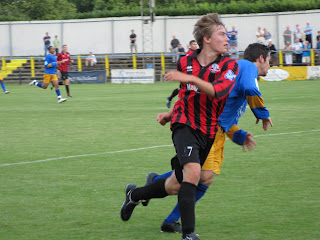 St Albans 1-1 Lewes (22:08:09)
- click on photos to enlarge -
Such is the joy of following The Rooks on the road that our numbers are now swelling. As well as stalwarts Cynical Dave and Big Deaks, we were joined in this trip to St Albans by Mr Fuller of TBIR fame, his daughter Lolly and newest EFW member and all round good chap Al McCulloch.

Obviously, no trip to St Albans is complete without a visit to the City's splendid Cathedral. It was interesting to learn that an earthquake shook the abbey in 1250 and damaged the eastern.....what's that Deaks!? Britain's oldest pub is just around the corner!? Off we jolly well go my son. 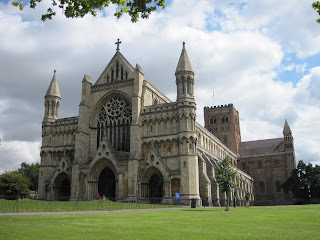 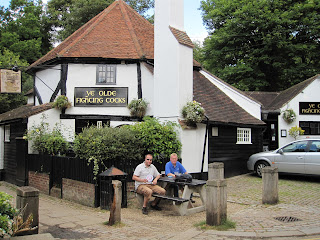 EFW team in 'visiting a pub' shock (not). 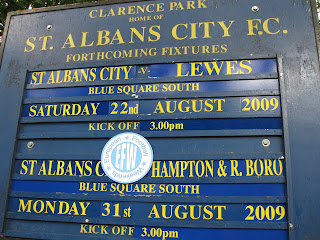 As per usual it was a thirsty old day for the EFW team and so after spending six seconds marvelling at the second longest Cathedral in the UK it was time to move onto one of the umpty thrumpty pubs that lay claim to be Britain's oldest with a visit to Ye Olde Fighting Cocks. Never mind oldest, it was also one of Britain's most expensive, so after a swift pint it was time to move onto the ground via another pub (Robin Hood) and just for good measure a few more pints in the clubhouse at the ground.

Said clubhouse had an 80's feel to it which was reflected in the music (Depeche Mode, Cure, Abba etc) and the fact that we all sat around watching events unfold at the Oval in the Ashes on teletext. Bless them.

This match represented a small milestone for me in that it was the 200th ground I've visited. I can't think of a nicer place to have chalked up the double century. The ground looked a picture. Sadly, St Albans - like Lewes - are in a bit of financial bother. Most of the fans we saw in town beforehand had Arsenal shirts on and were off to the Emirates. Give me a trip to St Albans over a visit to Arsenal any day of the week. People of St Albans, give your club a helping hand.

The first half of match was pretty much a non event aside from an incident in which Danny Cullip got sent to the stands for having a 'quiet word' with the lino and a bit of inspiration from Dan Beck, who nearly lobbed Lewes into the lead. Nobody in the crowd seemed too bothered though as players and fans alike basked in the glorious Hertfordshire sun-she-ine. 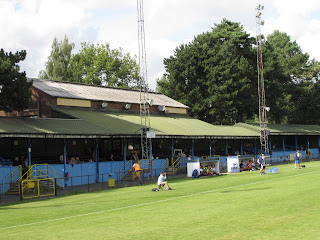 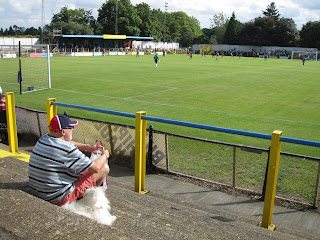 One man and his dog. 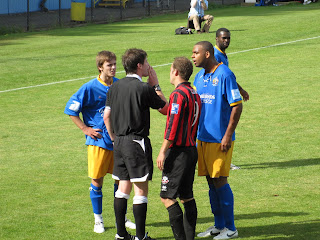 "Pssst...don't worry lads, I'll add on an extra minute at the end for you to score!" 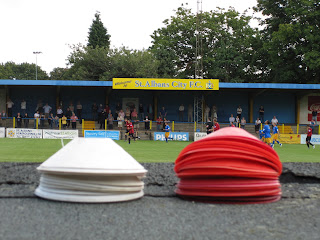 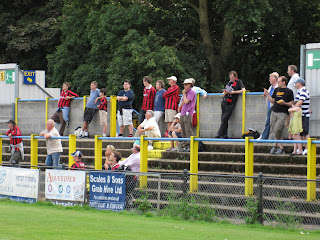 Even with my most optimistic hat on, I don't think I could have foreseen the circumstances that occurred midway through the second half. As you may know, European Football Weekends sponsor Lewes striker Sam Crabb. So here's the deal - in the 67th minute David Wheeler was up to his usual tricks with him going one way, the crowd going the other. So he swings in a little cross for our man Crabby who coolly finished to make it 0-1. He then ran over to me and well - let's not beat around the bush here - we had a little cuddle. 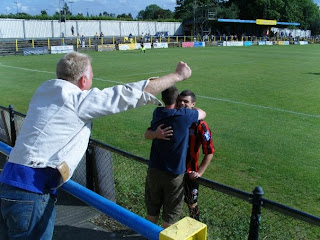 Cynical Dave in full celebration mode as Crabby and I share a little moment.
So just as I was penning my 'Smash and Crabb' headline - which I've had tucked away in a little draw for a while - up pops Mark blooming Peters for St Albans in the chuffing 93rd minute and bloody well heads past Rikki Banks for the flipping equaliser. Probably just about deserved on the balance of play but pretty annoying all the same. There was even time for Lewes to romp up the other end in more time added on (this bit we didn't mind) but Lewes sub Louis Pople fluffed his big chance after a neat run which denied us a last minute frenzy. Stinker.

Back in the clubhouse after the match and in order to do our bit to help St Albans survive, the EFW team finished off the supplies of Brock Bitter behind the bar. Cynical Dave then chose this moment to win 20 notes on the football scratchcard (he has previous in this department). We also chatted to the players and afforded ourselves a small giggle as we noted that Chris Breach was wearing what appeared to be a pair of diamond earrings. 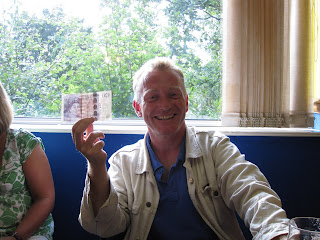 Cynical cleans up in the football scratchcard department. 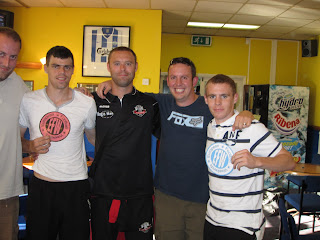 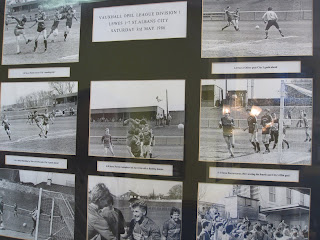 Happier times for St Albans in this photo story of the day they clinched promotion at the Dripping Pan.

Before making our way out of the ground we popped onto the pitch for our mandatory photo. Then events took a turn for the better as the St Albans Chairman invited us into the boardroom for a bit of the old free beer and food! There we chatted to the match officials, giving the lino a bit of friendly stick about the Cullip incident before travelling back into London Village with them on the train. They then went off to work for the football foundation, officiate in the West Ham v Millwall League Cup tie and referee the Aldershot under 18's match respectively, whilst we headed back to Brighton for a few more bevingtons. Good old life! 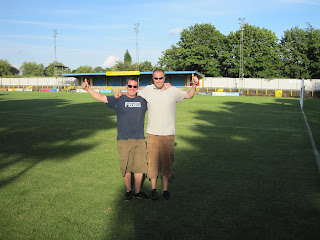 The booze brothers. Danny and Deaks.
* Ryan Storrie is in competition with Sam Crabb in the EFW/TBIR competition. You can find details of this by CLICKING ME.

Excellent blog,
sounds like you had a great day out

Thanks very much Gaz, it was indeed a great day out and a simply splendid place to watch a match.

Whilst I'm here, this email flooded into the EFW Office today:

Well done Danny, your EFW report on the Saints v Lewes match was superb, you keep football real. Having followed the Saints since the mid 60s, its nice to know there are genuine people out there. I hope Lewes (like the Saints can survive).

Thanks Mr Smith, now will some open the windows!