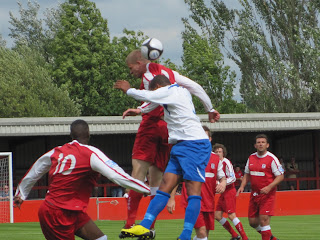 Brewing up with The Robins
Ilkeston Town 1-2 Burton Albion (10-07-10)
- Click on photos to enlarge image -
Leaving no stone unturned in my research for this game, I signed up to follow 2 (two!) Ilkeston Town Twitter accounts. @IlkestonTownFC and to keep it real @Ilson_fan. It was the usual updates in the run up to this pre-season friendly against Burton Albion; new signings, 65th anniversary celebration news, new kit launch, winding up order, oh. The later came right out of the blue for most Robins fans but hey, we'll deal with that further down the page.
After the previous nights over indulgence at Buxton FC. EFW decided on a considerably more healthy pre-match routine this time around. Even though it was my birthday, pints were exchanged for walking boots and we stomped around the hills of Birchover rather than give our collective livers a further pounding.
Finding Ilkeston Town FC should prove a doddle for someone who has been to about 250 ground right? Wrong. Their website was undergoing a makeover at the time of going to press. So I punched in "Ilkeston Town FC postcode" into Google. It returned with a bit of the old DE75 7JJ and so into my SatNav that went and Bob was presumably my Uncle. And relax. Relax that is until 15 minutes before kick off when I pulled up to a house, a very big house in the country. I think it was the Chairman's fancy abode.
A few directions from friendly locals - like the old days - saw me right and we pitched just before kick off to met by a sign saying, hang on a minute 'Welcome to Worksop Town FC'. Those pesky kids, just because I'm a soft Southerner, you just wait until....oh I get ya....they ground shared here up until last season. Just pay your fiver and in you go Lasty you radish.
Things to note as you walk into the New Manor Ground then: A perfect pitch - tick. A marvellous original old clock tower in one corner - tick. Programmes sold out - tick. No scarf to buy for my Lewes FC clubhouse refurbishment - tick. A crowd of around 416 - tick. 100 or so Burton fans - tick. Darren Caskey the size of a bus - tick.
To make up for lost time, I headed straight for the Robins clubhouse to procure a welcome pint to take with me on the terrace. It was hotter than Greece in Derbyshire after all. Who'd have thought? Evidently, you can buy beer and sit in your seat at the World Cup final but you couldn't do it at Ilkeston Town. These are draconian rules that need changing. Football fans aren't criminals. Let them have a civilised pint - at least at a bloody pre-season friendly against The Bloody Brewers! 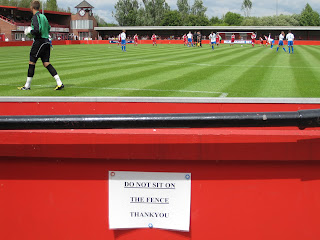 Ok then, let me have a beer on the terrace. 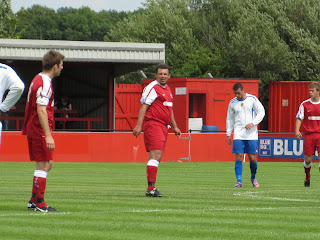 Darren Caskey - the size of a bus? 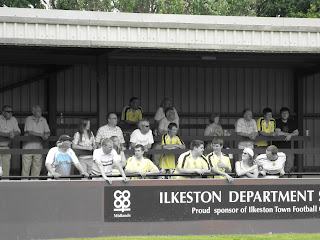 The Brewers take the Ilkeston department over. 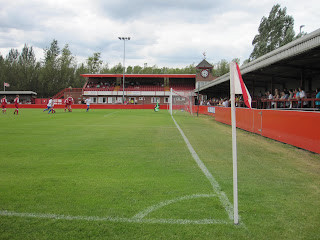 Click to enlarge and then spot the ball *cough* young photographer of the year.
After getting over the initial shock of the size of Darren Caskey - in fairness, despite a diet of Bakewell Tarts over the Summer months, he's still got it - the game settled down and was pretty decent for a first run out of the season. Burton had a couple of trialists on show who impressed, especially the delightfully named Axel Bossekota who scored along with Jack Dyer to put Albion two up at half time.
At half time I caught up with @ilson_fan (Wayne) and his Dad (Glyn) for a chat over a beer - finally. They'd turned their backs on paying 30 odd quid to watch the nearby Nottingham Forest and had been enjoying non-league football for years at Ilkeston. Glyn did tell me of the days - three of them - he spent travelling to Munich on the train to see the Tricky Trees in the European Cup Final. He wore Nottingham Forest trousers for the occasion. That's Nottingham Forest trousers.
Talking of Nottingham Forest trousers (three mentions and counting), I once tried to swing a fast shoe to The Buzzcocks at the Reading Festival but was put off by the site of a chap in front of me who was sporting a pair of Derby County shoes. That's Derby County shoes. I know the two teams hate each other but what say combining Nottingham Forest trousers with a pair of Derby County shoes for a night out - in say Leicester.
Wholesale changes in the second half which would have Sven Goran Eriksson punching the air with delight ensued. We were treated to the sight of Robins skipper Jason Lee (recently interviewed by our pals at The Ball is Round) marshalling his troops at the back. Yep, he's no longer a striker, centre back these days old chap. Grant Ryan also pulled one back for Ilson with what I am contractually obliged to called an 'impish' lob.
Aside from Jason Lee, Darren Caskey and Paul Peschisolido there was one other celebrity at the game. Pleasingly, it was Jim Royal from the Royal Family. Before popping into The Feathers he'd pitched up here for the afternoon. Rather than keep a low profile though, he demanded a stand to himself. How the other half live eh: 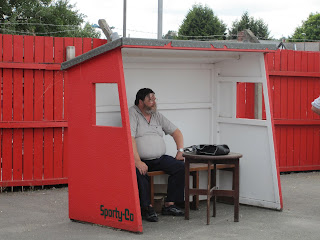 My arse! Jim Royal with his own stand.
With my journalistic hat on, I did manage to pull Wayne aside to ask him a few questions about Ilkeston Town:
That winding up order came out of the blue didn't it? Is the future of ITFC in safe hands with (new owner) Gary Hodder? Totally out of the blue, however it wasn't actually a winding up order. It will be if the debts are paid within the next month but our new owner, Gary Hodder, assures us this won't be a problem. It does feel like we are in the safest pair of hands then we have been for a very long time.

The previous owner (Chek Whyte) was a bit of a character wasn't he. It's no secret that he's not a millionaire anymore though is it? That's one way to describe him *laughs* It's got to be remembered though that if he hadn't had stepped in when he did then it was highly likely that there wouldn't be an ITFC today. Just a shame he didn't live up to his other promises.

It's the clubs 65th anniversary on July 24th. How long have you been a fan? I've been a fan since about 1995, around the time that the late Keith Alexander took over. He has been, without a doubt, the greatest manager we've ever had.

Does the club draw supporters from other league clubs in the area when they're not at home? Ilkeston is smack bang in the middle of Derby and Nottingham so we do tend to attract fans from both these teams. It's a bit of a double-edged sword though as it does mean that there are quite a few sheep lovers down at the NMG!

Who are your rivals? Eastwood are our biggest rivals. There ground is only 5 minutes away and there's a good spirited rivalry between both teams. I've got to mention the fact that we played them 4 times last season, beating them 3 times and drawing once. Oh yes, we also finished above them in the league *adopts smug grin*.

The official nickname is The Robins but does everyone call the club "Ilson"? That's just a shortened version for those who can't be bothered to say Ilkeston every time right? Yeah it is. It just rolls off the tongue easier...especially after a few beers.

You would appear to have a huge clock in the corner of the ground. That's a nice original feature. Do you have time to tell us what's that all about? It certainly is an unusual addition to the ground. It's certainly a talking point for the away fans but home fans tend to ignore it now. There's plenty of seating next to the clock tower but hardly anybody uses it.

What was the greatest moment in the clubs history? Beating Carlisle United in the first round of the FA Cup courtesy of a Paul Raynor goal direct from a corner. This was made even more memorable by the fact you could see me celebrating on Match Of The Day!

My Ilson debut has coincided with my birthday today. What is the clubhouse like? Does it knock out a decent pint of Guinness and make strangers welcome?
I don't know about the Guinness but the beer's not too bad. However, here's some breaking news, the clubhouse has just changed owners this week so your first drink there will also be our first drink. Happy birthday by the way!

And finally, can you sum up Ilkeston Town in a Tweet of under 140 characters? Hard to beat team who never give up and enjoy a taste of badger!
We then retired to the clubhouse. Amusingly, the fans had been told it'd look a bit different under the new owners. So what had changed? "They've put table clothes on the tables" chirped Robin Wayne. We all laughed. 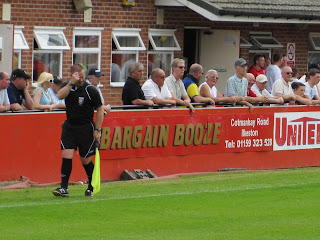 01159....the lino tries to remember the number for Bargain Booze. 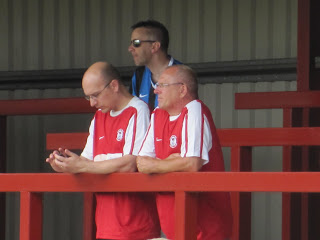 For further reading, check out The Ball is Round who've also been to ITFC:

Northern Steve only gave Ilson 5/10 for their Chips and Gravy last season, putting them behind Hucknall Town and Lincoln United but above Gainsborough Trinity...

But what's the story behind the clock tower? It's a strange, but nice thing.

Yar, the pitch looks like a blinkin bowling green... and the sign in ur pic is clearly a remnant from the General Election...

The Forest slacks-Derby shoes idea was genius (I'm sure I could build that in photoshop :P)

Good to see Earl Hickey on the pitch... karma is a funny thing...