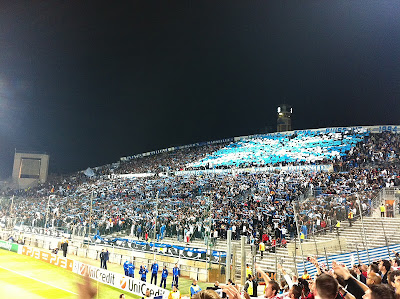 Yo Ho Ho and a Bottle of Rum
Marseille 0-1 Arsenal (19:10:11)
Dave Macnamara travels over land and sea to watch his beloved Arsenal in the Champions League...

France has been a happy hunting ground for Arsenal in recent times; with the exception of two European finals, the Gunners have never lost in France, so there was a degree of confidence amongst my lot as we boarded the train from Kings Cross to the Cote d'Azur, the day before the game.

Via a change in Lille, we arrived in Frances second biggest city in the afternoon. Our hotel was conveniently situated right across the road from the station. The Holiday Inn Express may be a notch above the Travelodge, but at £45 a head, for two people sharing, it was pretty ideal. For a city with that many inhabitants, it's fairly compact. From to  the hotel to the port, where the city really seemed to come to life, was about a ten minute walk. The main square adjacent to the port had a decent selection of restaurants, though they weren't too wallet-friendly. We ended up eating in a part of town known as Cours Julien, in a wonderful Caribbean rum bar called, imaginatively, La Rhumberie. Many of it's delicious homemade rums were consumed, the most mind-blowing being the house special chili variety. I've never tasted anything hotter. After rums, it was on to a bar for a gig.....well it's a bit of a bus mans holiday for me, and I will admit a girl may have been involved.

The next morning, it was back down to the port, where the number of Arsenal jerseys had increased tenfold, as one would expect. Drinks by the marina, and songs calling into question Harry Redknapps mothers working status meant by the time we were due to head for the stadium, spirits were high, if a little chilled. Four stops on the Metro and you're there.

I'm not sure if it's especially for European nights, but the processing of away fans at the Velodrome is an odd one. You are requested to arrive two hours before kick off, and greeted to a thorough search, then left to hang around what can only be described as an empty hangar for thirty minutes before entering the stadium. The Velodrome is currently under-going something of a makeover, with 2016 on the horizon, the entire Tribune Ganay stand is now merely an empty concrete block, with some makeshift seats and nothing in the way of facilities.

The game kicked off, and Arsenal fielding a team generally considered by those around me as being stronger than expected, settled in well from a defensive point of view. BFG Per Mertesacker and Koschielny dealing with what ever Marseille send their way, with the expectation of two occasions, when our full-backs were shown up I can't really think of any particularly dangerous moment. Offensively Arsenal were pretty poor though, Arteta playing a slightly more withdrawn role, while Walcott and Arshavin tried, but didn't really do much. On the one occasion when Walcott did leave his opposing number for dead, his delivery  was as good as you'd expect from a player who can barely cross his legs! How much longer this supposed central striker can be accommodated on the wing, is anyone's guess?

Second half and Marseille, bouyed by playing into their expectant fans had the better of the early possession, without really testing SZCZ. The withdrawal of the supposedly good Loic Remi, for the supposedly good André-Pierre Gignac was met with a giant French meh, while the removal of Lucho González brought a chorus of boos. Deschamps is clearly on borrowed time, which considering they won the league last year, seems absurd.

As the game drew to a close, it became clear that a point would do Arsenal, however we were experiencing some joy down their flanks, which the introduction of the newborn horse that is Gervinhio looked to make the most off. With decent chances falling to both the tireless Van Persie and the tiresome Walcott, the feeling amongst the visiting fans was one of ".....fuck it's cold, can we get back to the pub?  But as the clock ticked towards the 93rd minute, a cross from it might have been Djourou, would be missed by The Forehead, before being smashed home by the recently introduced Aaron Ramsey. A smash and grab if ever I saw one, however the joy, and relief that you could sense was being felt by the players, was clear to see. Moments later Damir Skomina blew his whistle and the job had been done. Of course the compulsory hour long wait, standing in the rain, meant that by the time we made it back to La Rhumerie, just after eleven, thirsts needed quenching. Many rums later, and a detour back down to the port, and it was back to the hotel.

A 12 o'clock train, with a brief sojourn in Paris, got us back to St Pancras by 6:30. By the end, it had been an enjoyable experience, made all the sweeter by the late winner. As a city to visit, Marseille is a bit on the pricey side, though one to at least tick off the list, without ever really feeling the need to return. Ticket, travel and board came in at about £240, with another £100 on food and booze. After the run we've been on lately, I'd have paid that any day.