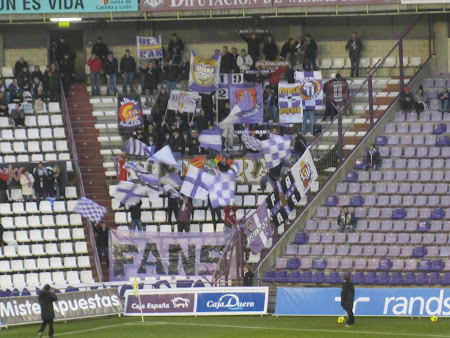 Daddy, Daddy Cool
Real Valladolid 2-2 Tenerife (02:01:11)
What better way to kick off 2011 than a six hour journey, north by northwest, from our traditional Spanish festive season HQ in Salinas del Manzano to Valladolid for a slice of Segunda Division action. This is European Football Weekends, it's what we do, and - after the briefest of mid-season winter breaks - we're not just back, but back with a bang, an explosion, a thermo-nuclear explosion at that.

The Spanish spoken in Valladolid [Va-yer-do-lid] is said to be the purest, some say poshest, in the country. Hablan muy claro (they speak very clearly). It's also renown for being perishingly cold there, so much so that the Estadio Jose Zorrilla has heaters fixed into the roof of the stands to keep the punters warm during matches.

Historically, Real Valladolid have flip-flopped between the top two divisions. They've spent 40 years licking their lips in La Liga and 30 licking their wounds in the Segunda Divsion. Despite being tipped for promotion, the Pucela are having a decidedly average season and the fans aren't happy. Their socios (members) are down in numbers from 18,500, this time last year, to 12,500 and the dwindling home faithful have turned their anger towards the owners of the club.

Real Valladolid have always been the main team of the Castile y León region. A few fans dislike their near neighbours UD Salamanca, but nobody gives two hoots about other local teams Zamora CF and Palencia. Their main rivals are, somewhat surprisingly, given the distance involved, Sporting Gijon. Clearly, this rivalry was dreamt up before the advent of high speed trains. It only takes an hour to get here from Madrid on the AVE these days. It'll cost you though.

"Make sure you eat some Lechazo (baby suckling lamb) and drink plenty of Estrella Galicia (beer)" demanded my Spanish amigo Juan before my visit. So we did. Bar hopping in Spain is one of life's great pleasures, and the Calle de Correos, set just of the Plaza Mayor is the place to go in the old quarter. With a caña here and a tapa there, eat, drink, laugh, sing, everywhere a great seat. It was food and drink that had us dabbing away at our chops with a napkin and beaming with contentment. Delicious. 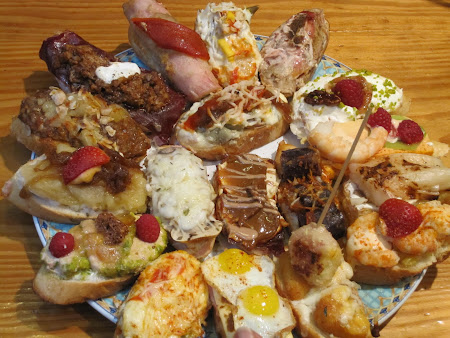 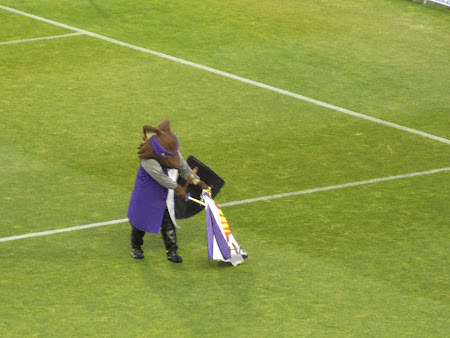 The fox in the box. Well, just outside, actually.
The football ground is a 20 minute or so bus ride out the to west of the city. There's a huge shopping centre just across the main road where some fans hang out before games, but that wasn't for me, obviously. I pitched up in the bar of the training ground directly opposite the main stadium. The good news is that Nirvana and Madness tunes were blasting out across the bar, the bad news was that I was pretty much the only person in there. Fans arrive late to games in Spain, very late.

There is no club shop at the stadium. Not even a measly trestle table selling knock off scarves. Nothing, nada. Well, aside from a lady selling pipas and jelly babies out of the back of a van. I had noticed a club shop on the Plaza Mayor, but even that had been boarded up. This means, that with a capacity of 26,000, I'm declaring the Estadio Jose Zorrilla to be the biggest club stadium in Europe without a club shop. It's not a fact but it's true, possibly. They need a bit of Zorrilla marketing there, no?

Match tickets for this game cost €20-€45. But EFW is big news in Spain nowadays and the club had offered me a press pass. Their media officer, Mario, took me under his wing and escorted me up to a press box at the top of the main stand. Nice, very nice. 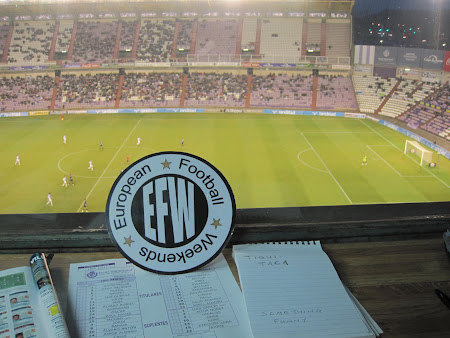 Not a bad view from the EFW office window. 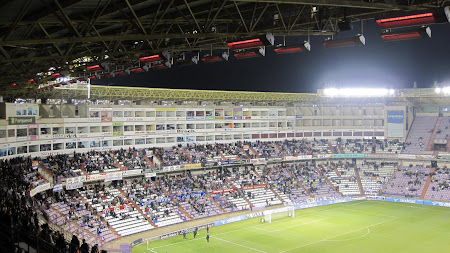 Scorchio. Heaters in the roof, tick. 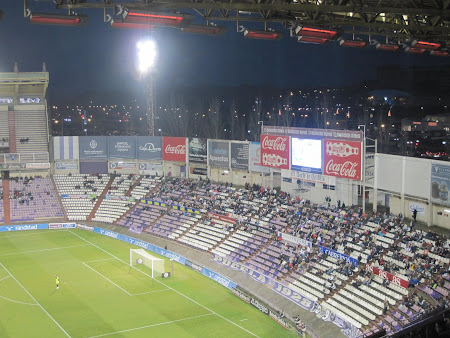 For fans of attendances, it was 8,388.
Look, a fox, on the pitch. Woof! Or more of a screaming-bark isn't it? Anyway, the fox in question was Pepe Zorrillo, the clubs mascot. He is a cross between a fox and a Castillian gentleman according to Mario. Dynamic, friendly and cheerful he may be, but I couldn't help thinking the budget had run dry half way through the making of his costume.

All the pre-match talk was of Javi Guerra, current owner of the number 9 jersey for the home-side. In recent weeks, Malaga, Deportivo and Racing have been sniffing around with a view to snap him up in the January transfer window. "There has been interest from other clubs", he said "But I like it here, and I came to help the team gain promotion" he added, whilst trying to catch the eye of his agent.

As the teams trotted out, with a half fox, half man for company, the two sets of ultras gave it their best shot to ratchet up the noise levels. They were situated in opposite corners of the stadium. They two groups have differing political views, not an unusual occurrence in Spain. On the left we have the Fossa Gerrafoni and on the right, Los Ultravioletas. Valladolid is supposedly a fairly right leaning city in terms of politics, and some cruel cats have referred to it as 'Thatcher-dolid' in the past. Ouch.

Oscar side-footed the home-side into an early lead, but just a minute later Tenerife had equalised. Okey-dokey, ten minutes in, two goals, tiqui-taca football and the best seat in the house. I was hooked. But I am not a fan of music on the PA after goals, oh no. After Oscar had popped in the opener, they played Daddy Cool by Boney M. Aright, a fitting tribute to Bobby Farrell (RIP), nice touch, I'll let it pass. But no, they play it after every home goal. Is that Daddy, Daddy Cool? You decide. "We do it because we like it" said Mario.

I'll tell you what was cool, and that was Nauzet with his Beckham-esque free kick which regained the lead for Real Valladolid midway through the first half. This was brilliant. It was cold, but there were those aforementioned heaters in the roof of the stand. Not a problem. There wasn't too much noise, but then again, who'd be a Tenerife away fan? You'd have to have buck teeth and whiskers along with very deep pockets to follow them over land and sea. They had eleven fans at this game, and Sombreros off to that second XI for making the journey. 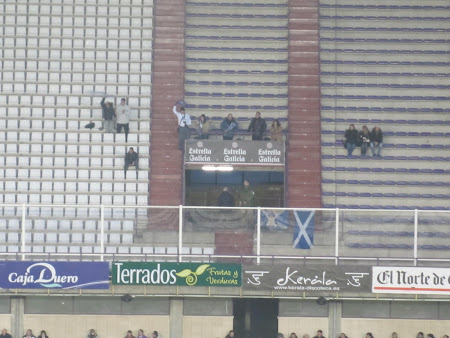 We all follow the Tenerife, over land and sea. 11 away fans, tick.
Real Valladolid battered the home goal in the second half as Tenerife fought like caged tigers to keep them out. Aragoneses in the opposition goal was inspired. The referee did his best to ruin the spectacle, booking nine players, but this was hardly Zorrilla warfare. With the game nearing its conclusion Tenerife swung a hopeful free-kick into the mixer which substitute Iriome glanced into the net with his noggin. 2-2.

A cacophony of tutting echoing around the stadium for the final few minutes. Some fans looked towards the board of directors, voiced their anger and waved their fists. Others shuffled off in a huff and the ultras unveiled a ready made banner of protest. Relative joy had turned to despair all too quickly. For the neutral, it had been a thriller at the Zorrilla. The local Vallasoletanos thought otherwise, however. 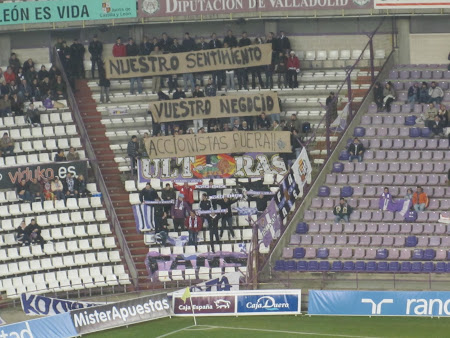 Sack the board. We put the passion and you take the money. 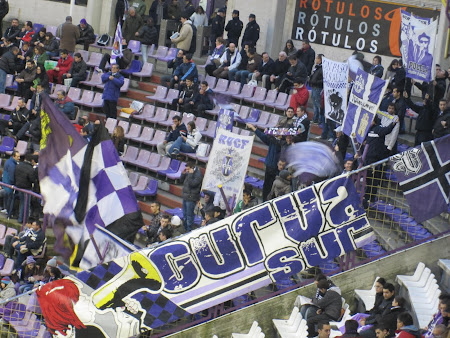 The other ultras.
I made my way down the post match press conference where I was soon joined by the buoyant Tenerife gaffer, Juan Carlos Mandiá Lorenzo. He struggled to hide his grin and a rough translation of his press conference would read something like "I'm as happy as Larry, bollocks to the lot of you and have some of that."

The mood changed as the home boss, Abel Resino Gómez stepped into the room with a face like thunder. His bottom lip quivered as he blamed tension, money, the weather, the crowd, the fox and the lack of a club shop for defeat. Something like that anyway. He was in a mood, that much I do know. 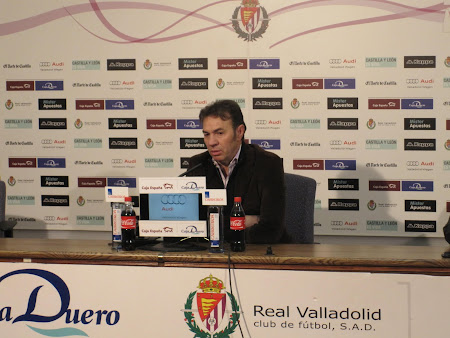 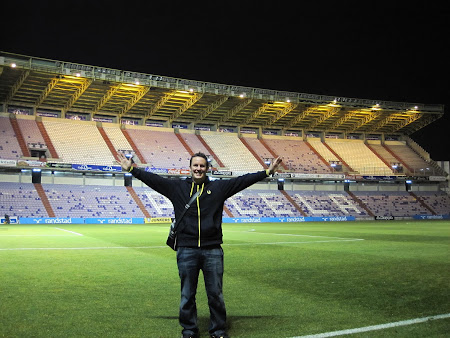 New year, same old tactics. On the pitch again. Yeeeeessss.
So that was my first game of 2011. I didn't know that it would turn out to be a fitting tribute to the life of Bobby Farrell, but I'm glad it turned out that way. I headed back into town to listen to a string of disco hits and continue where I'd left off on the food and drinking front. Valladolid is a perfect weekend destination if you're thinking of your own EFW. It's cool, Daddy Cool.

For lots more photos from the match and the weekend CLICK ME.
- Feel free to comment below -
Posted by Danny Last at 08:28

I've had a little note from the club regarding the club shop situation.

There are, apparently, there are four places in the stadium where you can buy merchandise and a further three in the City of Valladolid.

So, I may have done them an injustice on the marketing front. Just that I didn't actually see anything, which was a shame, because I would have brought back a few goodies for the Lewes FC clubhouse, The Rook Inn.

Also, whilst I'm on, I wanted to use the headline 'Zorrilla in the Mist', but annoying, there was no mist. Just so you know.

Superb as always Danny. Sounded like a great day and a decent game.

Looking forward to your next adventure.

Thanks, Danny, for the report on the Real Valladolid vs. Tenerife game. Like the way you capture the spirit of such less fashionable clubs and games! My eldest son and I are season-ticket holders here in Pucela, which as you will have learned is the nickname for both the town and Real Valladolid. This is useful because the club's name is a bit too long for chants!! You will have heard (despite the meagre attendance) those haunting chants of Puu-cEEEEEElllaaa! Unfortunatley we weren't at this game (on a cultural trip to Madrid!). Next time you come we will foot you a few beers and tapas and send you home with a pressie for the clubhouse!! Martin Gell

@Andrew - Thanks for that old chap. The next trip to foreign soil will be for the Berlin derby. Oh, and the Leipzig derby which is on the same weekend. Whoop!

@Martin - Thanks for those comments. Shame I missed you. Are you English or Spanish? How come you've ended up in Valladolid?

Great report Danny! And roof heaters! I have passed this on to Lyngby's (hopefully) new ground project!