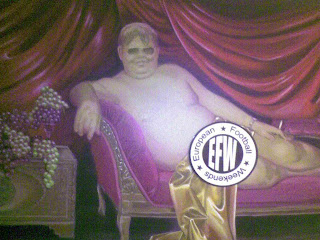 We're going a long long way baby
EFW are delighted to bring you the Fat Boy Slim World Cup Tour Diary which will be written by our new signing - Charlton Athletic fan Stuart Mair. He'll be accompanying Norman and pals to South Africa:
Planet Football is definitely in our orbit. My Sister, with no proven track record in watching the beautiful game, has announced that she intends to buy a new TV for the forthcoming football feast that is about to commence. Whilst the marketing machine that has invaded our High Street comes as little surprise, the sheer number of flags attached to cars and houses certainly does. Are we really that expectant?
Planet Football offers me the opportunity to do this blog, I have never done one before, bit of a learning curve for me to be honest. Football, however is not a new pursuit, perhaps if it was I would not become a Charlton Athletic season ticket holder and follow a Club that won things occasionally.
But enough of the domestic football preoccupations, I need to think of South Africa and my forthcoming insertion into Planet Football. Let me introduce you to my squad that will be joining me on this trip.
AL - Thoroughly decent chap, dependable in the, ahem, tackle and just the sort of chap that is great company to have around. Supports Brighton and Hove Albion.
GARRY - Quite simply one of the nicest people you could wish to meet, versatile, willing to take people on but never, ever, looks for an unfair advantage. Supports Leatherhead.
NORMAN - Had a great season and reached previously unheard levels of fitness, is now the owner of a terrific engine. Great at set pieces. Supports Brighton and Hove Albion.
Right so that is the squad so now what games are we are off to? At the moment we are doing five and I intend to do a blog from each of them. That is if my Nokia e71 is going to manage the strain! The games are:

Friday 18th June England v Algeria Green Point, Cape Town
This Game is of obvious importance to me because as well as En-ger-land playing it will also, in every likelihood, feature ex Addick Madjid Bougherra. I do hope he plays as erratically in the back four as he demonstrated in his time at the Valley.

Er, then we have a bit of a break until

Naturally, we'll be watching all the other games but that will be done on TV, though never say never of course. There may be others to attend before returning to England at the end of the knockout phase for some of the squad to attend Glastonbury FC’s AGM!
Now as can been seen from the above travel list there is plenty of opportunities for things to go wrong and difficulties to arise, but that is not all the squad are doing whilst out in South Africa. No, this blog will be reporting on the following events as well: 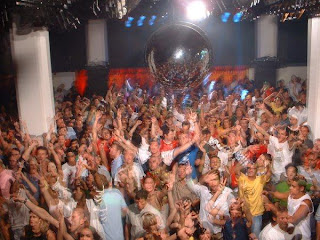 Those Euro 2004 gigs all seem a bit of a blur now.
Now what will offer the squad sustenance during this trip into Planet Football? Well there will be astonishing amounts of football related trivia for a start, some really crap football shaped sunglasses, some terrific company, twisted people, dodgy refs, appalling decisions, dull games, incredible ones and a surprise Team. Please let the surprise be England! As the colour blind DJ who joins us on this trip said to me “This means we are all go for a feast of biltong, acid house and fuss ball in June”

There are late concerns of the fitness of Garry, will he make the trip? We are awaiting the reports from his Doctor who he saw today. Should he be unfit, who is our Michael Dawson? Can we take Darren Bent? (That Danny Last chap would be absolutely ideal - Ed.) Additionally there appear to be some doubt over the Port Elizabeth gig, are there any promoters there looking for a colour blind DJ? I will try and keep you all posted.

Is the Port Elizabeth gig happening?

Frank the cat had North Korea!! So much for the luck of the ginger fluffy one!!

Then I had France! say no more!

Give it large team Mair Bear!