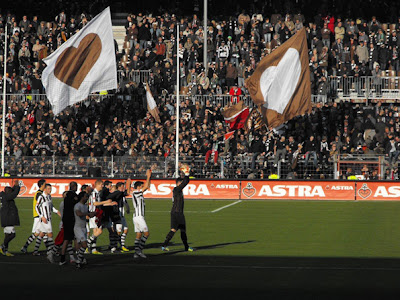 I realise there’s only a finite number of reports I can file on my visits to the Millerntor that the folks at EFW can accommodate with their usual good grace and, having written about my trip over in August for the Aachen game, I’m rapidly approaching the threshold. However, this was my 40th BIRTHDAY SPECTACULAR. And, in the best traditions of Lesley Gore, I threatened to blub like the only-child I am until Danny acquiesced and let me warble on about my ‘Special Day (TM*).’

However, there are some key differences from my regular jaunts to St Pauli… First, it wasn’t just me, it was my wife, two girls and my mate Shaun and his kids. Second, rather than my usual lightening fast visit– that’s usually curtailed by having to dash to the train station to begin the marathon haul across Europe back to St Pancras – we flew, and we were staying three days. Finally, we were going to tick off a few of the city’s tourist attractions that we’d not previously got round to seeing. So, whilst I can’t promise any new footballing insights – the Millerntor is, after all, the Millerntor and it’s always fantastic – I can offer a write up that includes: a new found obsession with TV Towers, harbour cruises, sugar-dips, early-morning runs, mid-morning drinking, excessive toilet stops and swimming with, err, dinosaurs.

The trip got off to a flying start at Luton airport (see what I did there, eh, eh?), when despite the ungodly hour we all managed to check-in, clear customs and rendez-vous with time to spare. I’m not the greatest of flyers but with the kids in the party steadying my nervous by taking bets on exactly when and where we’d crash land, the flight passed quite quickly.

We’d passed up the usual budget hotel option to live it up in a rather splendid hotel in Sternschanze, just a stones throw from one of my favourite landmarks on the Hamburg horizon, the Heinrich-Hertz-Turm or, more simply, the Fernsehturm (TV tower.) Expedia had done us proud, and the view from our room offered a fantastic view of the tower, the Millerntor and the docks beyond. 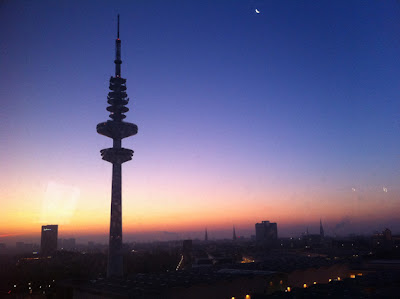 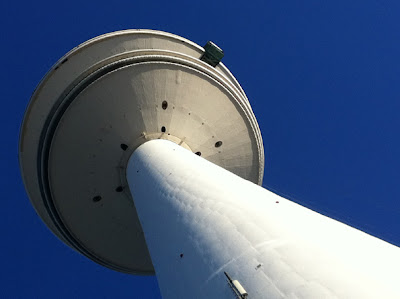 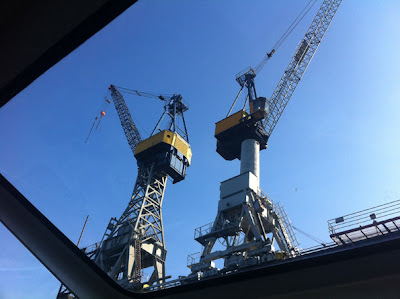 Big cranes: on the, err, Max 'Harbour' Kruse.
We decided to go heavy on the culture on the first day, and headed down to the Elbe to catch a lunchtime boat trip around the harbour. In our rush to get a boat we by-passed lunch and forgot to check if the tour included an English-speaking commentary. As a result, when we returned to the quayside an hour later we had some very hungry and very grumpy kids on our hands. It was officially and unanimously voted the ‘worst part of the holiday’ by the younger members of the party. The adults quite enjoyed it, though. It certainly gives you a sense of the importance of shipping to Hamburg’s history and economy. The container port is vast and highly mechanized, whilst the scale of the Blohm & Voss shipyard could also only be appreciated from the river. It was also fascinating to meander through the distinctive redbrick buildings of the warehouse district and contrast it with the shiny glass and steel of the new HafenCity. But the cultural value of such a trip can be seriously compromised if you’ve got tired and hungry kids on your hands, so as soon as we were back on dry land we headed for a café and some sustenance in the form of (Ham)burgers, chips and currywurst.

With the 3.30am start starting to catch up with us, we knocked the scheduled visit to Beatlemania on the head, settling instead for a kick-about in the park and an early tea. No drinking until dawn at the Fischmarkt for us, we were safely tucked-up in bed by 10pm.

Sunday. Matchday. Another delight of having young-ish kids is their ability to wake up early no matter what time they went to bed the previous night. Fortunately, the early start gave us a fantastic view of the sunrise over Hamburg from our hotel window and inspired me to head out for an early morning run. The bloke on reception did a double take as I emerged from the lift in shorts and a t-shirt, shunning the high-tec (and warm) surroundings of the hotel gym for a run around St Pauli. It was lovely, crisp and cold. At 7am, Budapester Straße down to the Millerntor was almost deserted, aside from the occasional worse-for-wear reveller staggering back from a Saturday night on the Reeperbahn. I stopped to catch my breath and take a few pictures of interesting bits of graffiti around the stadium, including stickers calling for the release from custody of renowned, local street artist, Oz.

Refreshed by a shower, it was nearly time for our party to split along gender lines. The girls were off to the zoo, whilst the boys were heading to the Millerntor. My eldest daughter (a veteran of FCSP’s 2010/11 opener in Freiburg) was a bit gutted to miss it, although the fact that we were standing this time would’ve made it tricky for her to see what was going on – and besides, the prospect of feeding elephants was keeping her spirits up, as was a secret pact to return to the club shop on Monday morning!

First stop was the Fanladen to collect our tickets (a delightful €11). It was good to catch up with Justus and Stefan (who I’d managed to miss on my last few trips.) Buoyed by it being my, erm, ‘Special Day’, Shaun and I decided to have a celebratory Astra. Shaun’s son joined in the fun with a bottle of Spezi, that curious mixture of orangeade and coke, favoured by many in these parts. It was 10.30am. I don’t drink a lot at the best of times, so the beer quickly went to my head, and shortly after that my bladder. I also picked up a great ‘I Just Can’t Get Enough’ t-shirt, which not only sums up how I feel about trips to the Millerntor, but also handily contains an image of my new favourite thing, the TV Tower. We then moved on to the AFM container to rendez-vous with some fellow fans from the St Pauli messageboard, but not before I’d made several trips to the portable loos outside the ground. 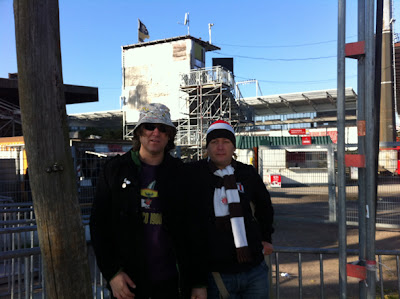 What Reni did next. Shaun has waited 15-years to wear that hat out in
public. 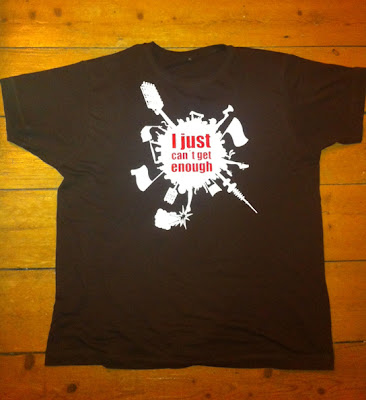 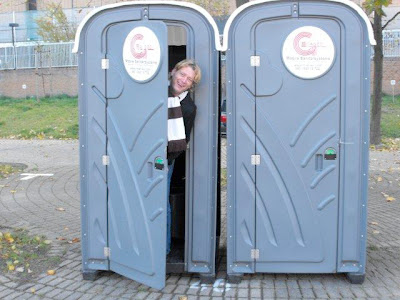 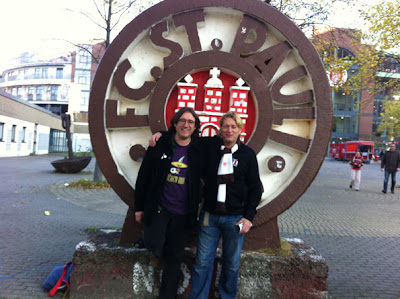 Obligatory concrete badge shot
We elected to get into inside early to get a decent spot on the Südkurve. It’s always a pleasure to drop a few Euros into the Ultras collection tin, at least then I can feel I’ve played a very small part in supporting the amazing choreos that they put on throughout the season (and that usually I enjoy from the comfort of my computer screen.) Once in the ground we opted for more beer and currywurst. The beer was being served in ‘Denis Naki’ cups, which seemed like a good omen as he’d been sidelined by injury for much of the season, but was in contention for a start today. I spilt currywurst all down my scarf, a sure sign (as if I needed one between the regular trips to the loo) that the beer was kicking-in.

The crowd steadily built up around us. Shaun was cock-a-hoop when one of USP gave him a quick salute of recognition as he passed (probably impressed with the hair, eh, Shaunio?!) Hells Bells sent the usual shiver down the spine, as did an impressive choreo from the Nordkurve (the north terrace was all St Pauli today, as FSV Frankfurt had only brought 70 or 80 fans with them.) Not to be left out, the ‘singers-corner’ on Gegengerade was flush with shredded paper pom-poms. The sky was a beautiful pale blue, and the stands were thick with brown, red and white, it was a perfect day to watch football. Only, trouble was, I needed the loo – again. So, after a handy close-range save from the St Pauli keeper, I decided nothing much more would happen in the opening exchanges and picked my way through the crowd. Bladder emptied, I made it back to the top of the steps to see the ball looping into the FSV net. I joined in the celebrations, totally unaware of who had scored St Pauli’s opener (turned out, it was a deflected Max Kruse effort that had wrong-footed the Frankfurt keeper,) then made my way back to our spot on the terrace.

Dennis Naki, back in the team and obviously motivated by his appearance on so many plastic cups, slotted the second home to make it 2-0 at half-time. Apparently, I missed a miniature helicopter doing laps of the stadium, but what did I care, I was able to empty my lightweight bladder without missing any more goals.

The second-half was a bit of a come down. FSV got a goal back and St Pauli, as is occasionally their want, did their best to gift them an equaliser. But we held on for the win, and I held on for the entire second period without a toilet break. 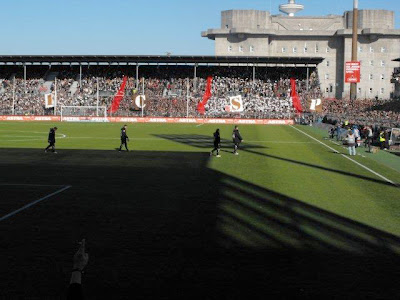 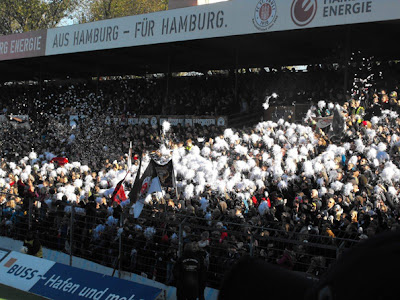 Gegengerade confetti-storm
We hung about a bit at the end, soaking up the last of the atmosphere and the autumn sun, then made our way out of the Südkurve. However, before we met up with the girls, I had one last special request for my ‘Special Day,’ I snuck back into the ground to say goodbye to the Gegengerade. There’s a high possibility that the next time I’m back in Hamburg, I’ll be greeted by The Wave, failing that a more conservative terrace option will replace the crumbling, but much loved Gegengerade. But for now, it was one last chance to stand where, for me, it all began on the beautiful back-straight. Pictures in the bag, it was time to head back to the hotel. That’s usually where my report would end, after another intoxicating afternoon at the Millerntor. But we still had a day left. 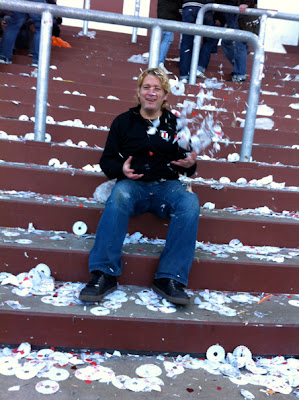 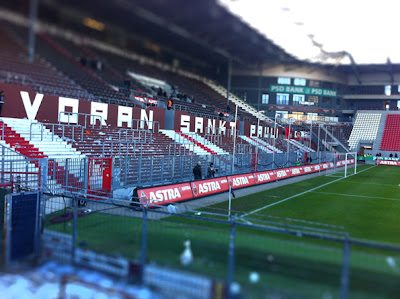 The fabulous painted steps of the Südkurve 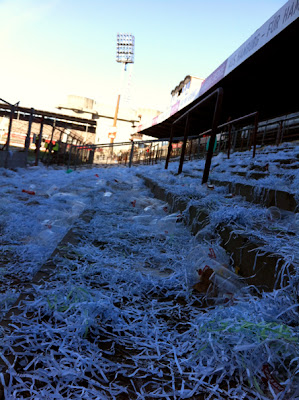 Goodbye Gegengerade
On the Monday, we packed our trunks and headed off to the Festland pool to swim with dinosaurs – great big fibre-glass things that spurted warm water from their mouths and in one particular case, its, erm, bottom. The complex was massive, brand new and spotlessly clean. And owing to the fact that Hamburg’s half-term break was the week before, it was virtually empty. It also has a fabulous, heated, outdoor pool with steam rising from the water as it met the cold autumn air, giving it a slightly otherworldly feel.

One final trip to the club shop (as promised) and we were done. Another great trip to Hamburg, made more ‘special’ by the fact that I was sharing it with family and friends. I’ll be back, but this trip will always be referred to as my ‘Special Day,’ although, harbour cruise aside, everyone else enjoyed it too. Thanks to EFW for indulging me even further. Normal service will be resumed next time.

* There were constant references to my ‘Special Day’ on this trip and, the more I think about it, I’m not entirely sure the other members of our party weren’t taking the mick. ;-)