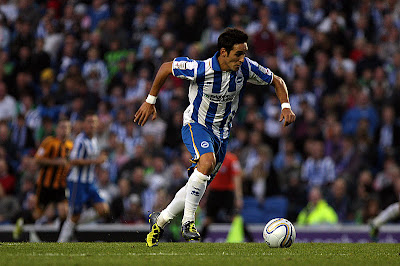 Vicente: From the Mestalla to Falmer
The year is 1997 and on England’s South Coast, things are far from sunny, writes David Hartrick.

Brighton and Hove Albion are facing an uncertain future as the Goldstone Ground has been sold as a result of an asset strip from a board led by a man with little to no regard for the club. On the pitch, elimination from the Football League has only just been avoided on the last day of the season in a dramatic game between the 91st and 92nd placed teams in English football. While some bemoan the fall from grace of a side who just 14 years previously were in Division One as well as being FA Cup finalists, others more in the know are silently concerned that the club is on the verge of tumbling into the abyss forever.

Meanwhile in Spain, Levante Unión Deportiva are playing in the Segunda División and embarking on a season that will eventually finish in relegation. Despite what will prove to be an ultimately disappointing campaign, one of the high points is a promising debut by Vicente Rodríguez Guillén. Destined to become more simply known as ‘Vicente’, at the age of just 16 several of Europe’s scouts are purring over the left-winger and he is immediately installed in the Spanish national team’s youth set-up, making his debut at U16 level and going on to also play in the U17, U18 and U21 teams in the next two years.

Fast-forward to the year 2000 and a new millennium is here. Vicente has continued to impress and grow as a player, helping to steer Levante back into the Segunda División at the first time of asking and then to a comfortable 7th place finish. He is the standout performer at the club, destined for bigger things and a move to Champions League runners-up and Supercopa winner’s Valencia is made.

Despite Kily González standing in his way Vicente forces his way into the first team and hits the ground running. In his first season he helps Valencia reach another Champions League final that disappointingly he spends on the bench watching them lose to Bayern Munich on penalties. He has already shown signs that the left-wing berth will be his long-term, he is now on a mission to prove it.

Back in England there are green shoots of recovery in Brighton as a consortium led by Dick Knight has chased the businessmen out of Albion’s boardroom and replaced them with people who care about the club’s future. After leaving the Goldstone in 1997, two seasons have been spent laughably calling Gillingham’s Priestfield Stadium ‘home’ as the club has been forced to play their games at the ground, a mere 150 mile round trip from Brighton itself.

The 1999-2000 season sees a return to the city at the far from perfect Withdean Stadium but it brings a long-sought sense of hope and by the turn of the millennium, a small amount of pride is returning to the club. In February of 2000 they make their own move for a youngster and sign an unproven striker named Bobby Zamora. Brighton once again feels like a club with a future.

Journeying through time again to 2004 and Brighton and Hove Albion have been making headlines for their football as well as their finances. A double promotion with Zamora at the head of a bristling and industrious side had brought hope, relegation from Division One (now the Championship) a brief bump back down to earth. However, bubbling behind every move the club makes is the saga that’s slowly beginning to define its existence - the move to get planning permission to build a new and permanent home in Falmer.

A fight is raging between Lewes’s District Council and local residents potentially affected by the proposal, and the club’s board and fans led by Dick Knight’s determination to get the plans through. Having been through the courts and still with no resolution imminent, the government itself is being called in to intervene and Brighton’s long-term future once again rests with people with no direct investment in the club or its future. Another promotion to the newly named Championship is earned via the Play-Offs but the doubts remain, the Withdean is a short-term solution and without a permanent home, Brighton still feel like nomads in their own city.

In Spain Vicente had easily become one of La Liga’s top performers over the last three seasons and had just recorded his best ever campaign, tearing apart defences across the country and into Europe as Valencia won the title, the UEFA Cup and the UEFA Super Cup. He returns 14 goals in a season that sees every major club in Europe linked to his signature, he is by now established in the full national side having played in every game of Spain’s poor Euro 2004 tournament in Portugal, and his magnificent season is suitably rewarded by his club with a new contract and mountains of praise from his normally reserved manager Rafael Benítez.

Despite signing a four-year extension with a suitable pay hike included, with Ryan Giggs’s form supposedly waning at Old Trafford and a more central role beckoning, many are sure that Vicente would provide Manchester United’s attacking thrust from the left-wing at some point in the very near future.

And so we come to 2011, to today, and to Brighton and Vicente’s improbable marriage sealed with a one-year contract formally signed on the 2nd of September of this year.

Brighton’s long battle to gain planning permission was finally won in 2007 and Vicente’s new home was not the athletics stadium butchered into shape enough to host Football League games at Withdean, but the £105m Falmer site now with naming rights sold and resplendent in it’s guise as the American Express Community Stadium. With a capacity of 22,500 and with new chairman Tony Bloom and now ‘Club President for Life’ Dick Knight’s vision complete, the necessary icing on the cake for any truly great football story had come in the form of manger Gus Poyet leading Brighton from the League One wilderness back to the Championship in title-winning style in their last season at Withdean.

Vicente’s career undoubtedly stalled from that truly wonderful 2003-04 season with Valencia thanks to a combination of ankle injuries and what he claimed were incorrect treatments and diagnosis from medical staff. While each comeback has showed the capabilities of a truly gifted player, the body has broken down each time and failed the spirit. As Brighton took the 2010-11 League One title playing arguably the most entertaining brand of football ever employed by an Albion side, Vicente was preparing for an inevitable exit from a club he admitted to loving. At the age of 29 a player who had been potentially one of Europe’s best left-sided midfielders found himself without a club and desperate to shake off the injury-prone tag he felt he didn’t deserve.

As a Brighton fan, Vicente’s signing felt like ‘that’ moment in a recent history filled with an almost unheard of amount of joy. This is without any shadow of doubt a player of such talent he could be gracing far bigger stages but he chose to rebuild his career with us. This is our Robert Prosinečki to Portsmouth moment, the realization that you’ve got a player so unlikely you find yourself casting furtive glances left and right looking for the wind-up to end. Whether his career at Brighton ultimately proves to be a success or failure, his hero status was all but sealed the moment he picked us as his new employers.

With a new stadium, a city back in love with the game, one of the most sought-after young managers in the English leagues and now a player with La Liga, Champions League and international pedigree to call our own, this is a very special time to be a Brighton fan. Having weathered the storms of the nineties to emerge happy to still have a club to call our own, then spent the noughties biting fingernails through legal battles and potential rain at the horrifically exposed Withdean, this feels like it just might be our time.

Do we want to storm into the Premier League and start challenging for Europe immediately? No. A trouble free few seasons enjoying mid-table, non-headline baiting campaigns in the Championship and financial parity would do just fine.

Well he just might be here on loan to us for a year before a bigger club realises we’ve got him but do you know what, I’m going to enjoy every minute.


----------------------------
David Hartrick is an editor at In Bed With Maradona and author of the soon to be released '50 Teams That Mattered'.
This article originally appeared in the first edition of Spiel Magazine. Simply click here to purchase Issue #2
Photo credit: Paul Hazlewood
Posted by Danny Last at 09:48

I stood up beating my chest after reading this. We really have come a long way, baby.