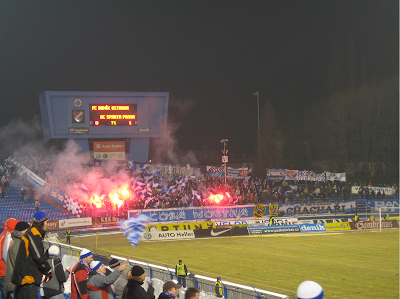 Banik On The Streets Of Ostrava
Banik Ostrava 0-2 AC Sparta Prague
Iain Thomson with another installment on his footballing adventures in the Czech Republic...

Following my trip to Plzeň the previous Saturday, my itinerary took me to the Czech Republic’s third city, Ostrava, where I was to attend the real ‘big match’ of the weekend, FC Baník Ostrava v. AC Sparta Prague.
Ostrava is a city I know very well, having spent a year studying there in 2002-03. For this reason Baník remains my favourite Czech club, albeit not the first one I ever went to (that honour goes to Brno). 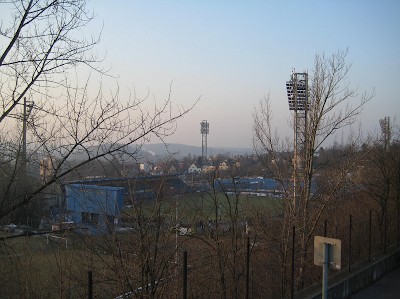 Following the discovery of rich deposits of coal and other minerals in the region in the 18th century, Ostrava (located 350 km from Prague, in the north-eastern corner of the country) became one of the major centres of heavy industry in, successively, the Austro-Hungarian Empire and Czechoslovakia. Unfortunately, this industry went into sharp decline in the 1990s following the collapse of Communism, and the region still suffers from high unemployment. However, the cityscape is still dominated by two massive steelworks (one of which, currently owned by Arcelor-Mittal, is still operational) and a number of disused mining towers dotted around the city. 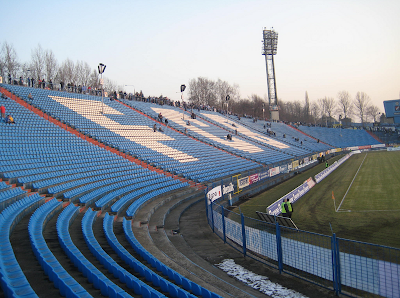 Ostrava’s major (and now, following the bankruptcy of FC Vítkovice in the winter, only) professional football team is FC Baník Ostrava, originally founded as SK Slezská in 1922 in the Silesian part of the city. The club enjoyed its best years in the 70s and 80s, culminating in three league titles, won between 1975 and 1981 (adding a fourth in 2004-05). Famous names associated with the club include Luděk Mikloško, Pavel Srníček, Tomáš Galásek, Marek Jankulovski, Milan Baroš, Libor Sionko, Marek Heinz and Václav Švěrkoš.
With FC Vítkovice existing for decades in Baník’s shadow, a true city rivalry never developed and Baník’s main grudge match is now against Sparta, and to a lesser extent Slavia, as well as Sigma Olomouc and Brno. Games against these clubs regularly draw the largest crowds, with Baník taking anything from 1,000-2,000 away fans with them. 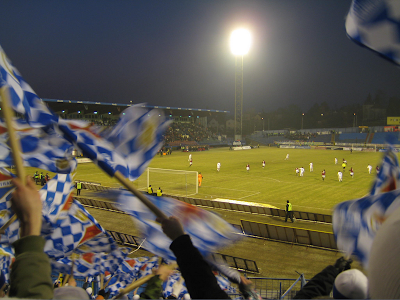 So I made my way eastwards – not, it has to be said, in expectation of a great spectacle, or even a home win. Having challenged for the title virtually up until the last day in 2009-10, Baník have recently been, frankly, crap, to the extent that they finished season 2010-11 only one place above (albeit six points clear of) the relegation zone. Still, it was Baník and, having missed out on the Sparta match last year due to not being able to get a ticket, I was quite keen to attend this one.

Sadly, it all turned out as expected. Sparta won 2-0 thanks to two goals from their Cameroonian striker, Leonard Kweukwe. Baník were rather uninspiring and Sparta did what they had to do. The official attendance was a disappointing 8,133 (capacity: 17,372). As usual, the police were out in force for what was a ‘high-risk’ game. In the end, only a hundred or so Sparta fans turned up, which didn’t stop a police helicopter buzzing overhead for the entire duration of the game. 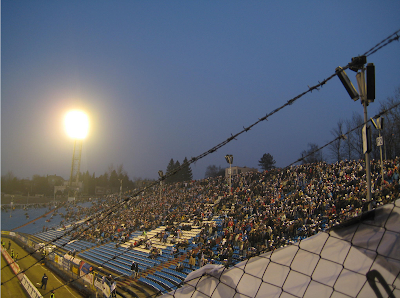 The main talking-point of the game was the fan protests: Baník’s stadium, Stadion Bazaly, dates from 1959. While still an impressive arena, and my favourite in the country, it can now best be described as ‘crumbling’. At any rate, it will soon no longer come up to league standards and must be replaced. A year or two back, the mayor of Ostrava stated that he was 100% certain that a new stadium would be built by 2013, only to announce earlier this year that, in fact, they’d merely renovate the existing athletics stadium in Ostrava-Vítkovice (where FC Vítkovice used to play). This did not please the fans, and the ultras in particular, with the major sticking-point being the fact that Vítkovice is not in the Silesian part of the city, where the club has its roots. The athletics stadium in question is also a rather dreary facility in any case. So after some discussion, the chosen form of protest for the Sparta game was to withdraw support for the first five minutes of the game. No club anthem, so vocal support, nothing. Encouragingly, this was observed by the entire stadium – including the away end. A similar point of protest was chosen for the next home game (which I also attended): on the 30th minute, everyone left the stand and stopped supporting until half-time. Sadly, but predictably, none of this has had much effect and the club is still on course to leave Bazaly at the end of next season. The fate of Bazaly itself is still uncertain, but here’s hoping it’ll continue to at least host reserve games and the like... 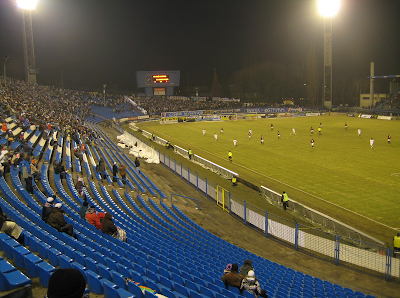 Discuss this and more on the new EFW forum
You can follow European Football Weekends on Twitter
Posted by Danny Last at 12:22