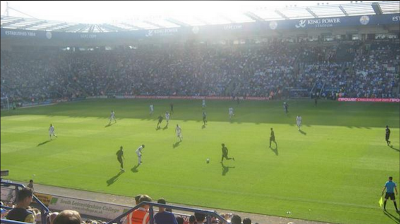 Leicester City outfoxed by Real Madrid
Leicester City 1 - 2 Real Madrid (30-07-11)
nPower Challenge Cup
A warm EFW welcome to writer, artist, thinking women's Justin Bieber and Leicester City fan, Ryan Hubbard...
Did you know that Leicester has a Statue of Liberty? If you're from Leicester you probably do, but if you're not, I have a photo to prove it. 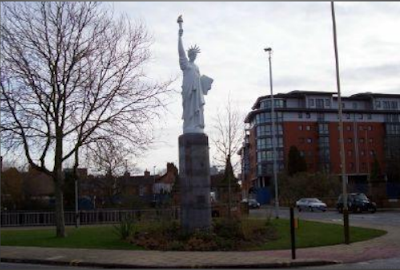 See, told you...
Originally erected in the 1920's, it sat on top of a local shoe factory named Liberty Shoes, but when the factory closed, the building and statue fell into disrepair. When the old factory was demolished to make way for more Student Accommodation, the statue disappeared. That was until 2008, when the City Council found it in a scrapyard, and erected a plinth for it on a traffic island just a stones' throw away from it's original location, greeting visitors to the city.
In my 23 (okay, okay. Almost 24) years on this Earth, I have been lucky enough to see many famous sights. The Colosseum in Rome, The Pyramids of Giza, La Sagrada Familia in Barcelona; they all rank as some of my favourites. But none come close to Leicester's Statue of Liberty. When you walk along Upperton Road on a match-day, and you see Lady Liberty's crown peer from behind the crest of the road, you could be forgiven for mistaking her for the original; sitting on her island pedestal and surrounded by a deep blue sea. But rather than the water of the New York Harbour, this is an ocean of Leicester City shirts slowly making their way over the River Soar, and around the corner onto Eastern Boulevard; ready to be greeted by the wonderful sight of the Walkers, er... I mean King Power Stadium in the distance.
Saturday's game at the newly-titled stadium may have only been a friendly, but it's the annual curtain-raiser at Filbert Way – a sort of tradition at many clubs. In 2002, Athletic Bilbao opened the Walkers Stadium with a 1-1 draw, and the following season it was Frank Rijkaard's Barcelona (complete with Valdez, Puyol, Xavi, Ronaldinho and Kluivert) who claimed a 1-0 win in front of 32,000 in LE2. Since then however, the standard of opposition has been on a steady decline. Going from a pre-season tournament featuring RCD Mallorca, Maritimo and East Bengal in 2004, to last season's “massive” game against Sunderland, much wasn't expected from the Foxes' faithful this season. But towards the end of the season, rumours began to float around that Leicester's Thai owners had planned a dress-rehearsal of the 2014 Champions League final (yeah, go on - laugh now) to open our 2011/12 campaign; and it turned out to be true. Real Madrid; the ones with Mourinho, Ronaldo, Ozil, and all them other players you see on the telly, were actually coming to Leicester!
This game caps off a rather surreal year for Leicester fans, starting off in October as Paolo Sousa was relieved of his position following a disastrous start to the league campaign. Imagine the shock when, upon switching to Sky Sports News expecting us to be linked with the usual suspects in Iain Dowie and Chris Coleman; seeing the headline “Leicester City have unveiled Sven Goran Eriksson as their new manager”. Then just a few weeks later, looking on through a dodgy internet stream as your team take on – and beat – the Thailand national team in Bangkok. Then how about seeing photographs of your club's latest retail outlet, in the Thai Capital's Suvarnabhumi Airport. And how about seeing this? Certainly makes a change from the previous years of being known for setting off fire extinguishers and rape allegations at Le Manga.
A 5:15pm kick-off - probably due to some television scheduling in the Far East - meant that there was plenty of time beforehand to sample a few sangrias (or rather Carlsberg and Cider) in the local cafés (pubs); and with a gloriously Iberian-style Summer day combined with all of the Real shirts floating around town, you could have been mistaken for thinking that you actually were in the Spanish capital. Although many of the Los Blancos shirt-wearing fans could probably speak as much Spanish as I can speak Swahili.
After a few “confidence pints”, a rendition of “When You're Smiling”, and a pub burger and chips in the city centre, the walk to the stadium soon switched to discussions on topics such as “How many Paul Gallagher was going to stick past Iker Casillas?”, and “How long until Matt Mills flattens Cristiano Ronaldo?”. Turns out that we weren't going to get an answer to either as when, checking Twitter for updates on the walk to the ground, we found that neither the Portuguese or the Spaniard were in the starting line-up. However, José Mourinho had placed Kaká, Karim Benzema, Fabio Coentrao and captain Sergio Ramos in his first-choice eleven – a by-far stronger line-up than Sven Goran Eriksson is going to have to combat in the Championship this season. 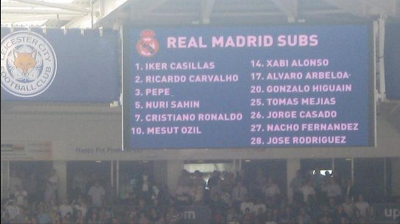 Can we just borrow a few for the first half?
A quick attempt to buy a programme (I later found out they had sold-out fifteen minutes before I had even arrived), and a quick trip to empty out a couple-of pints of pear cider later, and we took our seats in the West Stand. We might as well have sat in an oven with someone shining a torch in my face. On a day where Hell had already seemingly frozen over (word had spread that Fernando Torres scored for Chelsea); you'd have thought it was someone in Leicester who'd made a weather-swapping deal with Lucifer himself.
As 15,000-or-so City fans began to regret not bringing a pair of shades (and a young couple a few rows behind began to regret their choice of wearing a Barcelona shirt), the players made their way from the tunnel to thunderous applause; and as soon as the game kicked-off, Leicester were predictably on the back-foot. However Choruses of “Barcelona and Madrid, they'll make a mighty bid; but they'll never beat Leicester any more” rang around the stadium and spurred the Foxes on. It might have been a little naïve, but I think those singing actually believed it. I believed it. I just couldn't see it unfold.
I'm not going to pretend I could see everything, the bright orange ball in the sky put pay to that. But I did see Matt Mills head-butt an advancing Real player's foot, and just minutes later give the same treatment to goalkeeper Antonio Adan's knee. Cue chants of “he's here, he's there, he's every-bleeping-where” aimed at the former Reading man.
I did manage to see a cool finish from José Callejon, after Benzema's trickery rounded Kasper Schmeichel. I also saw Benzema get on the score-sheet himself, slotting home after Marcelo's strike hit the post.
I saw probably the most expensive substitute's bench ever assembled, cleared; as Cristiano Ronaldo, Xabi Alonso, Iker Casillas and Mesut Ozil made their way onto the hallowed KP Stadium turf. 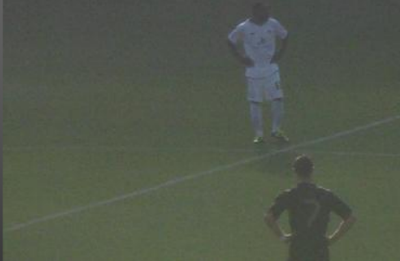 Ronaldo: "Nobody told me Darius Vassell was playing!!!"
I then saw the Leicester goalkeeper go on to make star-jump saves that even his father would have been proud of. And with two minutes remaining, I then saw the thing that over thirty-two thousand had waited to see...
A long throw-in, flicked on by Sol [Sol] Bamba, was met by the left boot of Lloyd Dyer. 15 yards out, Dyer smashed it past the rooted Casillas and into the bottom left corner. Leicester City had scored against Real Madrid.
As much as we'd said we'd beat them, we knew it was never a possibility. I think most would have settled for keeping the deficit to less than three goals. But we'd scored against Real Madrid. 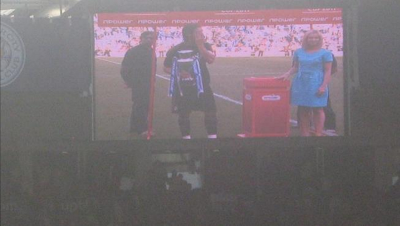 Don't drop this one Sergio!
As Sergio Ramos lifted the nPower Challenge Cup, the 32,118 began to make their way back down Eastern Boulevard and passed by Lady Liberty again. “E-I-E-I-E-I-O” the crowd sang; “Up the Football League we go”. A celebration of football it certainly was. I think I even saw Cristiano Ronaldo celebrating with a Pukka Pie. I don't accept cheques, Danny. 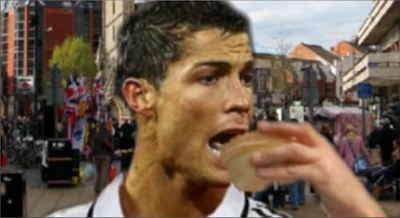 For the record: I promised Mr Hubbard a large stash of used fivers if he photographed Ronaldo in Leicester High Street eating a Pukka Pie. And he only went and did it....
PHOTO CREDITS: Gareth Lloyd (@El_Lloydie) and Ryan Hubbard (@Ryan_Hubbard)
Ryan is the Editor of  both Modern Football and Los Revolucionarios.
Posted by Danny Last at 11:27