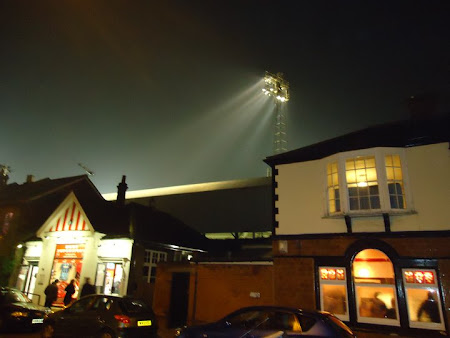 Seagulls are the Bee's Knees
Brentford 0-1 Brighton (08:03:11)
We sent roving reporter Nick Goodwin to Brentford to watch the mighty Albion....
Since EFW’s last League 1 outing in February, Brighton and Hove Tika Taka FC have notched up five league wins, scoring four goals in four of those games to boot. Minor blips at Franchise FC in the league and Stoke in the cup have quickly been forgotten. Time for Brentford to put a spanner in the works then.
Why do you say this, crazy fool? Mid-table team who have just been tonked 3-0 at the weekend putting a spanner in the works? Well here’s why. And here. You see, despite EFW Towers laughing in the face of loonies who spout superstition and all things supernatural, Brentford away is jinxed. Fact. Here’s the science : 0-0, 0-1, 0-4, 0-4, 0-2. But I’m a mere beginner and so had to turn to King of EFW, Danny Last, to recount a wondrous tale involving legend Garry Nelson before the Griffin’s spell was cast.
The Bees find themselves slap bang in the middle of the table, almost certainly too far off both the play-offs and the relegation zone to send any hearts-a-fluttering in the league. But their season has not been without fireworks. An exciting dispatch of Everton in front of the cameras in the League Cup was one of five (five!) penalty shoot outs that they’ve been embroiled in so far this season, with the short trip to Wembley still to come for the final of the Johnstones Paint Trophy. With the relatively safe position in the league, recently appointed boss-till-the-end-of-the-season Nicky Forster (I was wondering when you would get to him – Ed) has a decent chance to make a go of his start in management without the added pressure of fighting a relegation battle. Planning for Brentford’s 2011-12 league season starts here. We wish him well. Forster, of course, joined Brentford from the Albion, with a loan spell at Charlton sandwiched in between, and scored a remarkable 51 goals in 119 appearances for the blue and white stripes. There’s also added interest with the recent public acknowledgement by Brighton’s Jake Forster-Caskey of the support that Nicky, his step-dad, has given him whilst growing up and embarking on his playing career.
Brentford are also in what is still a select, but growing, group of clubs to be owned, or part-owned, by their fans. The group of blokes we spoke to outside the Princess Royal pub on a sunny day last season had all paid into the pot that made up the majority shareholding that is Bees United. A future EFW column or two in its own right no doubt. Coupled with this new set up are plans to build a new community stadium about a mile from Griffin Park. This site is visible from the Kew Bridge to Brentford pub crawl route that EFW took tonight, and although plans are stalled and at the early stages, it’s potentially going to be an interesting and pioneering project that will be worth following.
Did I say pub crawl ? Oh yes, so I did. Brentford, being closest to an overhead rail station rather than a tube, has always generated circa 73 pages of posts on North Stand Chat, with the Ruffians keen to know how to get there, what pubs to go to, what time the dry cleaners shuts, that kind of thing. As you by now know EFW prides itself on meticulous, Territorial Army-style reconnaissance and preparation ahead of every game. And today was no different. Seagull 1 (yours truly) was coming in from central London, Seagull 2 (Loud Ross) from Harrow, so Gunnersbury tube, and the Pilot pub nearby, was our first port of call. An early start in a backstreet boozer didn’t present the best of atmospheres of course so after a quick pint of Seafarers (what else?) it was off to the magnificent Bell and Crown. It was still early enough to enjoy some of the early Spring sun on the Thames, washed down with some sun-inducing Fullers Chiswick. We had to remind each other that we weren’t here for the duration and dragged ourselves towards Kew Bridge for the delightful time warp that is the Express Tavern. Remember what I said just now about meticulous planning? Well, last season we turned up to this place on a Saturday lunchtime and it was closed! No such trouble this time around :-
“ Express Tavern “
“ Hi, I’m just ringing to make sure that you are open early Tuesday evening as we’re planning to make a visit “
“ Yes, we open at half past five “
“ Ok, great, so you’re open and half past five “
“ Yes, that’s right “
“ Smashing, we’ll see you at half past five then. On Tuesday “
Click, brrrrr…. 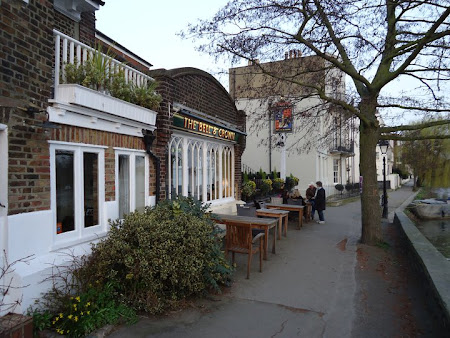 The magnificent Bell and Crown. *applause* 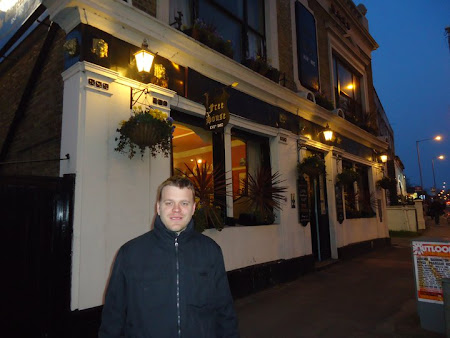 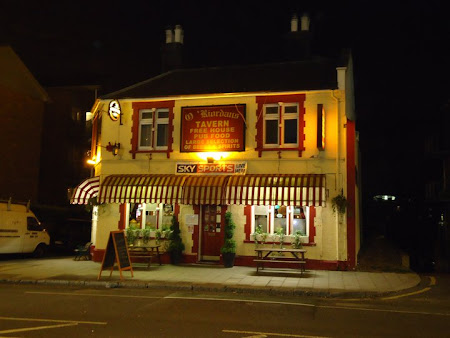 Worth it for the boozer?
Our plan to walk straight to the ground was curtailed by our inability to walk past the warm and welcoming Watermans Tavern, which was the first pub of the afternoon to contain a good number of home and away fans. This pub serves the local Irish community well with plenty of Black Stuff and Murphys pumps shining from the bar, and Irish sport shown regularly. We fondly recalled watching Sussex win their Twenty20 Cup semi-final in this pub before last season’s game. The food is also tremendous with a rollicking good Bangers and Mash (£5.50 to you my good fellow) polished off by Loud Ross in under six minutes.
Wanting to get off to the ground not too late we forfeited the next pint of IPA and made a beeline (tut tut) for Griffin Park. Now, eight paragraphs into our report, here it comes, are you ready? The obscure fact of all facts that is so unobscure that even my three year old knows it : Brentford has a pub on EACH CORNER OF THE GROUND! Yep, sorry, but it’s impossible to stop the words jumping right out of my fingers. We’ve never managed to complete all four at the same fixture and tonight was no different, so it was straight to The Griffin, the traditional ‘away’ pub. Although this is generally where the most vocal of away fans congregate prior to games, none of the pubs are off bounds to either sets of fans, and all of them contain a mix in varying degrees. Unfortunately the overwhelmed bar staff were unable to serve us a pint within three minutes so we bolted past the on looking horse-police to the other corner of the away end and into The New Inn. Not sure which part of this place is ‘new’, maybe it’s just the youngest of all four pubs, but we got served straight away by very friendly staff and we were settled for the final pre-match slurp. After a very strange encounter with a Brighton fan in the gents who claimed to be an attendee of our board meetings and started reeling off all sorts of information about contract details between Bloom and Poyet we had to get some fresh air. 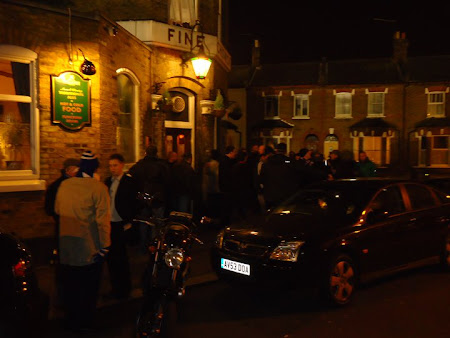 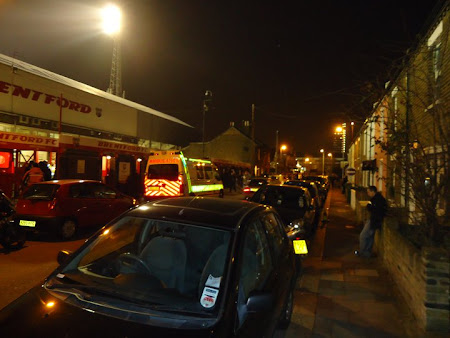 Google street view of the Braemar Road before the match, tick 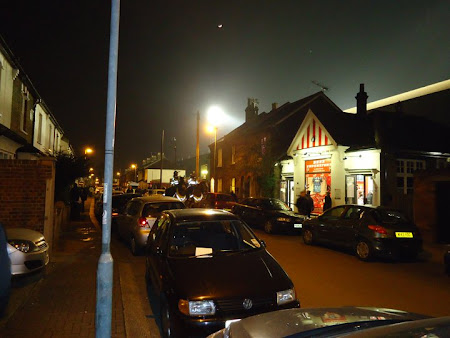 You like that did you? Have another on me
So, to the game. After a ten minute queue around the block to get in we made kick-off with three minutes to spare. And then it All. Came. Flooding. Back. Terracing, where have you been? This has been the first, proper packed-in standing game we’ve attended for quite a while (Peterborough was roomy in comparison) and my how much of a difference it makes. The noise, the passion, the chants, the shocking view, what more do you want? Some highlights for you, and I make no apologies for this being a list :-
· Upon realisation that Gus had changed our style for this game to a more traditional approach : “ We want our tippy-tap, we want our tippy-tap"
· From the 34th minute until half-time, non-stop (and still in my head) : the Elliott Bennett Heartbeat song, da da da da da, da da da da da
· Disparaging (but tongue in cheek) chants already being sung about the forthcoming split between the new North and West Upper Standers
· After the miss that we knew would miss : “ Penalties, penalties, we’re the famous Brighton and Hove Albion and we’re shit at penalties" (Albion have missed six of out of ten penalties this season)
· Tremendous “ One Marcus Painter “ singing whilst he lay prone for 5 minutes and then was stretchered off for what, thankfully, turned out to be nothing too serious
· The lone, and ultimately successful, attempt by a chubby teen in the Brentford stand nearest us to get himself ejected from the ground. 8 police officers required, overtime claimed
· And last but not least, upon receiving the usual unoriginal, homophobic chanting from a group of spotty pwoper nawty lads at the station, “ Tracksuits from Matalan, tracksuits from Matalan"
As mentioned above we took some time to absorb the fact that Triangles were out for this game. Clever counteraction from Gus? Yes, I think so in the end. The pitch was shocking and as we saw at Orient some teams are now combating quite well our passing game, so this was maybe an attempt to surprise Forza Forster. It worked, just. Not the most technically adept of games, but good proper football nonetheless, both teams creating mainly half-chances after our initial domination of the first half of the first half. 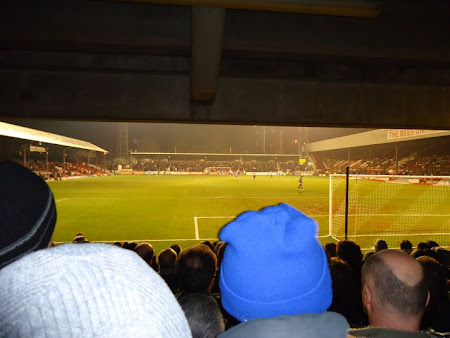 My one shot of our stand from above the heads came out all blurred, gutted.
After Murray was bundled over in their box we prepared ourselves for the inevitable penalty save that would follow. And lo and behold I just managed to see, whilst peering between the ears of the punters in front of me, our crossbar and the roof of our stand, the ball rebound off their keeper. Boo. But it wasn’t too long before that jinx was broken, and I guess in the only way these sorts of things can be, with a ridiculous goal. Murray would have been proud of the finish by the Bees defender which cued The Surge. It took us a few seconds to remember that you’re meant to run into that gap in front of you on the terrace when you score, and push and jump and shout and turn and push and jump and shout and turn. And this we did with beaming smiles. Brentford never really gave us the nervous stomachs that the closing stages of games like this often do and our confidence was confirmed when the final whistle was blown on 97 minutes (to accommodate the previously mentioned Painter pause.)
Just before we zoomed off to catch the first train back we were able to witness the joyous fist-pumping of Poyet to us behind the goal, gritted teeth an’ll. I think this one meant a lot to him and he has said as much in the post-match interviews to be found elsewhere.
So, despite our shouts of ‘We’ll never play you again’, of course we will sooner or later, maybe at Griffin Park, maybe at a new Community Stadium. At least we can now go a few seasons without losing here in the league and hold on to the memory of our hero, Mr O. G.
Follow Nick and European Football Weekends on Twitter
- Feel free to comment below -
Posted by Danny Last at 10:30

I worked in and around Brentford from 1993 to 2000 and the whole talk of the stadium in Lionel Road was active then....

A link to a video shot from the Brighton section here which was posted by Tomnorthi on North Stand Chat: