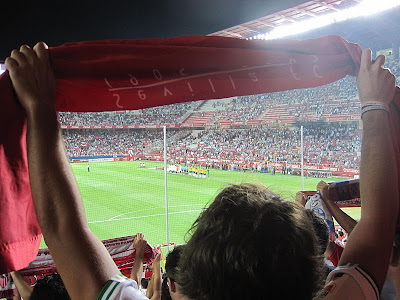 Behind Enemy Lines
Sevilla 1-0 Real Sociedad (17:09:11)
I'd been in Seville for a week, and already fallen head over heels for Real Betis and their underdog ethos. I'd even been made an honorary Bético and featured on their websites HERE and THERE. But I wouldn't be doing my job if I didn't cover their hated city neighbours whilst I was in town, right? It was time to slip into disguise, clip a comedy moustache under my hooter and covertly enter the lion's den: Estadio Ramón Sánchez Pizjuán.

This is the only city in Spain with two teams of roughly equal standing. The local press here often trot out, possibly made up, statistics as to  the numbers of fans each team has - and blow me down if they don't just say it's 51% to 49% one way or the other, just to create a rise and get some debate going. It's a tactic that has served Talk Sport well down the years, no? My cockles had been well and truly warmed here by the fact kids playing in the street - until 2am - wore either Betis or Sevilla replica shirts. Not a Barca or Real Madrid item in sight. Refreshing.

The Thursday before the Sevilla v Real Sociedad match, I stepped out of my apartment on Calle de la Feria and into a street market full of chaps trading football stickers. I'd been told several times that I was in the best district of the town, 'La Macarana' - the working-class heart of the 'real' Seville (beats heart with clinched fist) - and this just about confirmed it. It was the sort of market where one could buy old Sevilla CF season tickets for 50p a pop, and giant Real Betis calculators. I filled my boots, obviously. And if you think this whole paragraph was written just as an excuse to wheel out a photograph I took of some of those Spanish football stickers, then you'd be absolutely correct... 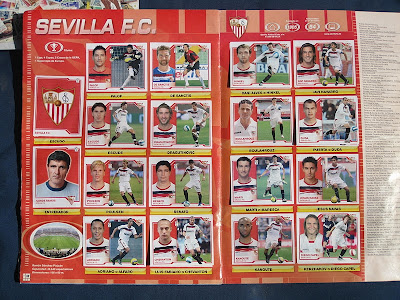 Got, got, need....
Fast forward two days, and for this match I'd chosen to opt out of the press box and sit with the actual fans. Or to put it another way; the club had turned down my request for accreditation. They said I was welcome to have a press pass for the Valencia match a week later, but that was too late for EFW. Who said 'Sevillista el que no bote' eh? Actually, that was a few thousand Real Betis fans a while back. Actually, I didn't mind not having a pass, and no it wasn't me who had sprayed 'Betis Ole' on gate 32 of the Sevilla stadium, but I was slightly put out that they didn't sell Sevilla slippers in the club shop. 3-0 to Betis on that score by the way.

You do have to hand it to Sevilla when it comes to whacking great artistic mosaics outside the stadium. They've got two at the ground, and both are mightily impressive. Then again, you'd expect nothing less from a city with thousand beautiful buildings. So, if Sevilla can lay claim to the best mosaics at a football ground, then surely today's opponents, Real Sociedad are entitled to raise their hand when it comes to the 'best club badge' category. What's not to like about an old skool football wrapped in blue and white flag. Brilliant. 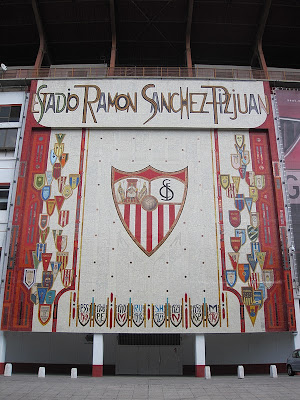 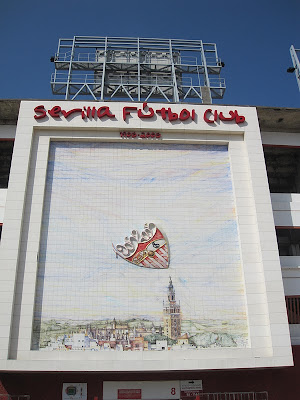 And giant mosaic Number Two 4 (four) Fifa stars
I paid €35 for my match ticket to sit in with the Sevilla ultras. Their season tickets start from €410 rising to a whopping €3000. They've got 39,000 abonados (season ticket holders) - but they don't always attend every  game because the average crowd last season was 36,489 (80.2% of the capacity). I'm telling you all this nonsense because I spent €6 on Marca's Guide to La Liga, which I charged to the @GTCMedia account, and they'll be wanting a return for that outlay.

The ultras at Sevilla like to think of themselves as 'lefties'. There were a few mandatory Che Guevara flags knocking about - but by and large the rest of the crowd wouldn't look out of place at Arsenal's Emirates Stadium; the sort who might tie a jumper over their shoulder. One of those chaps told me beforehand that Sevilla's new gaffer, Marcelino had booted out most of the dead wood during the summer, showing no less than 13 players out of the door. They were replaced by five shiny new stars, none of whom arrived with a big money tag, though. Real Sociedad's star player is Antoine Greiezmann. He's also their most wanted, and as such should be off by January. 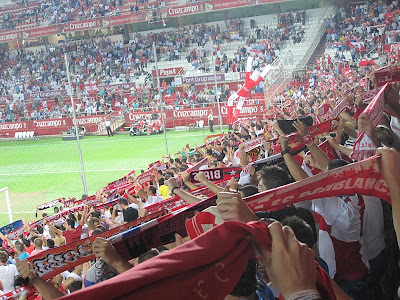 EFW covert operation in amongst the heart of the Sevilla ultras: a success 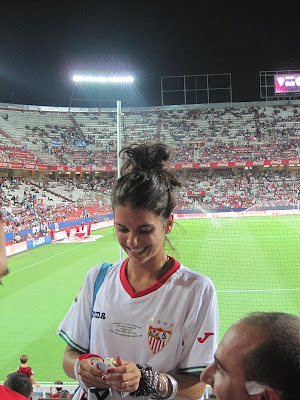 This girl waltzed in with three chaps all wearing Real Sociedad shirts. Nobody cared.
This pre-match conversation took place in Cafe Bar San Pablo during which time we watched Barcelona absolutely destroy Osasuna, 8-0. There were collective shrugs of the shoulder each time Barca marauded forward and scored with ease. Those present in this bar were already resigned to to a race for third place in La Liga and this, just two games into the season. Sigh. That scoreline from the Camp Nou would have resulted in yet more steam pouring from the ears of the president of Sevilla, Jose del Nido; a chap that has described the Spanish league as "rubbish" - the greatest pile of junk in Europe. His outburst had nothing to do with the fact Sevilla are making €100m (€100m) less than both Barca and Real Madrid in the distribution of TV money this season. Honest.

After the relative doom and gloom in of San Pablo, I was spoilt for choice in choosing another bar surrounding the stadium. I opted for La Pitarra because it had been serving beers since 1900, but I could have chosen dozens of others. Or brought along a few litre bottles of Cruzcampo and downed them outside on the streets like hundreds of younger fans were doing.

My seat really was bang in the middle of the ultras on the lower tier of the north stand. I had to stand on that seat the whole game, and inhale the waft of dodgy cigarettes which were constantly on the go. I was fairly high to be honest, but not as high as those 150 away fans that were gathered in the corner of the very top tier in the far opposite corner. A fair turn out from Real Sociedad given the distance and a 10pm kick off. 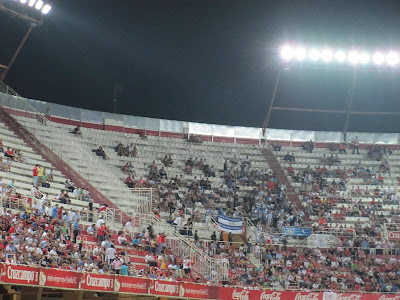 150 or so away fans in the top corner 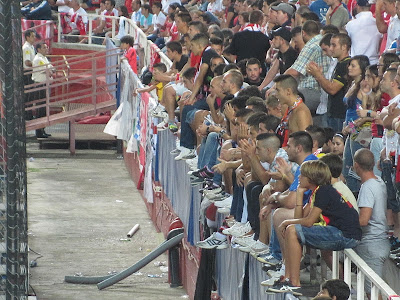 Front row tickets for these lucky punters. #precarious
The atmosphere was ticking along nicely until, after 12 minutes, a chap grabbed a microphone and had his drunken foghorn voice pumped through speakers at the back of our stand. You're not singing loud enough he declared, and that was it; for the rest of the game he sang non-stop regardless of who would join in with his singing or not. It's probably the worst example of a football capo I'd ever seen or heard. And I love noise at football matches.

I recorded him (see below). Let me know what you think. Notice that nobody is joining in with him. He's singing songs along the lines of "We're followers of Sevilla, and we're out of control"


Recording of *that* Sevilla fan. Thoughts welcome in the comments section below


There was a huge surge in our section as Freddy Kanoute was sent clear just before half time. It also caused a smuggled pint of beer from the upper section to come spilling down, showering twenty or so chaps to my right in Cruzcampo. Kanoute missed that chance, but made amends in the second half with a typically clinical finish to win the match for Sevilla. It was his seventh goal against Sociedad in six games; his hundredth victory for Sevilla and, one must admit, he is an absolute joy to watch. A gift for La Liga. The goal caused a bit of an old fashioned crowd surf from one chap; he was lifted from top to bottom of the stand, and back again. It was his birthday, apparently. Nice touch. 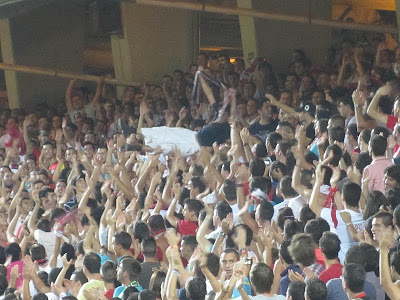 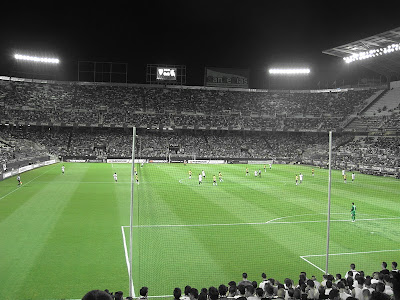 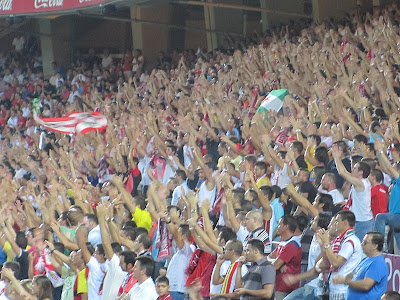 Hands up if you love European Football Weekends
That was my last night in Seville. A simply wonderful city with equally warm and charming inhabitants. I had no sleep that night thanks to Spanish pioneer of rock and roll, Miguel Rios who was wowing thousands of fans, belting out his 80's classics, next door to my apartment on his farewell tour. But I didn't care a jot. The next morning I was heading up to Madrid to see Atleti take on Racing Santander in a stadium named after two Brighton and Hove Albion players: the Vicente Calderon. Good old life.
Previously reports from this trip: Real Betis v Mallorca; Cordoba v Numancia and Xerez CD v Nastic.
Follow European Football Weekends on Twitter
Posted by Danny Last at 13:33

Nice report! looking to head to Seville for a few days over a weekend in April, when Seville play Levante. Can I just buy tickets at the stadium, I'm assuming it won't be too hard for the Levante game.