Even Better Than the Real Thing
Oldham 0-1 Brighton (19:03:11)
Brighton & Hove Albion continue to set pulses racing in League One. Dave Hartrick went to investigate their progress at Oldham. Or did he....

I should've spent Saturday afternoon at Boundary Park watching my beloved Brighton play Oldham Athletic but due to unforeseen circumstances, I couldn't go. Further to missing the game, I also promised Danny a match report so I have two choices - go cap in hand and explain my absence in the hope that he won't beat the back of my legs with a ruler, or do what any respectable journalist would do and make it up.

As I made my way to Oldham I couldn't help but be excited - this was after all once one of the most productive cotton spinning mill towns in the world (thank you Wikipedia). Coming from Huddersfield, t'is a mere hop, skip and a jump across the moors but in my 21 years living in the North, I have never visited the home of the Inspiral Carpets. As I made my way down the A627 and on towards Hilbre Avenue (thank you AA Route Finder) the anticipation of potentially bumping into Clint Boon was almost feverish. As the stadium loomed in to view, I remembered that if there's one thing EFW loves besides a poorly-judged pun it's a photo, so *ahem* out came my camera. 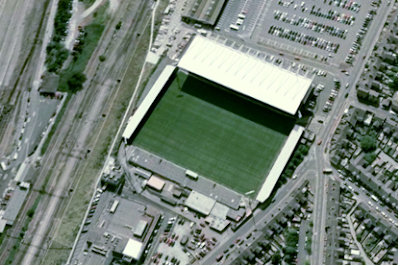 First glimpse of Boundary Park. I might not get away with this
As I'm sure you'll agree it looks quite magnificent, just the 3 stands because they don't need another. After parking the car in any one of the spots you can see in the photo above, we made our way into the ground hopeful of a great game and some warm hospitality ahead.

I've just had a thought - didn't Oldham have a plastic pitch? They must have got rid of it by now, no one has plastic pitches any more do they? It reminds of that Only Fools & Horses where Del and Rodney are pretending to be tennis players and a girl asks 'do you prefer grass or Astroturf?' for Rodney to reply 'Don't know, never smoked Astroturf.'. I had a friend who smoked Astroturf once, nasty business, always a shame when one dies so young. Also a shame when the word 'halfwit' is used repeatedly at an inquest. Cover your ignorance with another picture quickly. 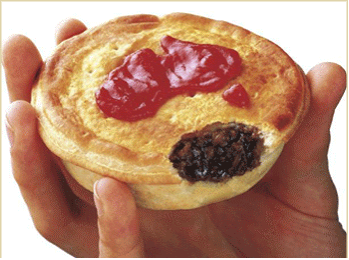 A pie that I ate. It tasted 'Oldhamy'. I don't know why they do their sauce in the shape of a map of Australia.
So onto the game. Oldham lined up as usual, Earl Barrett and Denis Irwin in defence, Ian Marshall and Andy Ritchie up front. Playmaker Mike Milligan looked to pull the strings in midfield and with Nick Henry, Graeme Sharp and Gunnar Halle on the bench, the Seagulls had an uphill task ahead.

As the game kicked off certain things became clear. Firstly, the plastic pitch could be a factor but coming from Brighton - Katie Price's home town no less - immediately the Albion looked adept at coping with a load of pointless plastic. Oldham looked to pump long balls towards Marshall, manager Joe Royle clearly believing Brighton could be exposed but their back line was simply magnificent.

.I've just realised, if I'm making this up, I may as well go the whole hog.

As the Albion found their stride, the Oldham crowd looked at each other and almost to a man the talk of who's the better footballing side started - Brighton or Barcelona? Among the away fans we were used to such lavish praise but when the home fans began chanting 'It's just like watching Brazil' at Brighton, some of us blushed. I didn't check the official possession stats but I'm pretty certain it was about 85% Brighton, 13% Oldham, and 2% a cheeky little bleeder in the crowd who wouldn't give the ball back at a throw in.

Now throw in an action shot - you're getting away with this my old son. 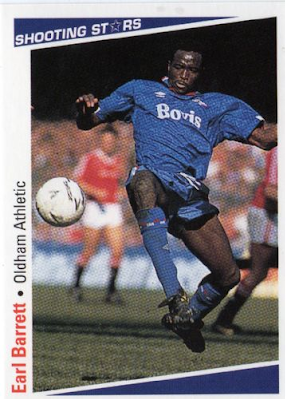 Earl Barrett in action, it even says so at the side
Brighton surged forward but the half finished goalless despite the away side hitting the woodwork on no less than 14 occasions. After the pie before the game I decided against something to eat but did have a strawberry daiquiri which was an unusual option, but also a delightfully summery one. As the crowd mingled I got talking to a few of the locals, the Oldham born and bred Bernard Cribbins told me a cracking but utterly filthy story about his time voicing the Wombles and a few minutes later, Professor Brian Cox and I got talking about the density of the average neutron star.

Having to cut the Professor off mid-flow seemed cruel but I wanted to get back to the game. With the away end now in buoyant mood, fuelled by a mix of daiquiris and typically Arsenal-esque pace and movement, the second half kicked off with high expectations.

On 67 minutes Brighton had the breakthrough their dominance deserved, Ashley Barnes scoring after beating all 10 Oldham outfield players, several substitutes warming up at the side and 2 over-enthusiastic stewards. Mazy run complete not even the Brighton fans expected him to flick it up and volley in the finish from some 40 yards. As the Albion fans rejoiced, several Oldham fans wept knowing they would never see anything as beautiful again like that weirdo in American Beauty who videoed a plastic bag blowing about - honestly, if he thinks that was good I could take him to a tip in Huddersfield that would blow his socks off. After the high came the low and the game then fizzled out to end 1-0.

To cap things off for the away side, a few miles over the Pennines Huddersfield Town were held to a draw to allow the lead at the top of the table to be stretched by a further 2 points. Even Jeff Stelling admitted on Soccer Saturday it was a great day for Brighton but I didn't see that, I was at the game and not at home in the front room up to my neck in baby sick, Kettle Chips and a half eaten Greggs Mexican chicken sandwich.

So a great day had by all, Oldham saw how the game should be played, Brighton continued their march to the Championship and I was definitely at the game. Definitely.

As you'll have gathered by now, Dave Hartick is a genius. Follow him on Twitter.
You can also read more of his work HERE and THERE.
- Feel free to comment below -

By eck... what a description... It almost like being there...

Dave Hat-trick is indeed a genius. That is the silliest thing I've read in a long time and led to many a big-lol. I'm definitely nicking: "...85% Brighton, 13% Oldham, and 2% a cheeky little bleeder in the crowd who wouldn't give the ball back at a throw in..." and passing it off as my own gag ;P