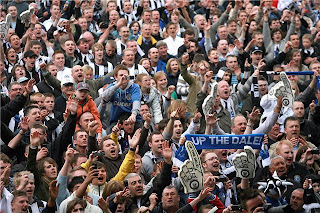 Dale of the Century
Its become a bit of a traditional for the EFW Team to treat ourselves to an annual day out to the Wembley for the League Two play-off final each May. Some of the teams we've seen have made lasting impressions with us and we've end up following their every move, whereas others, we've unceremoniously tossed straight back in the sea. Since we saw them lose 2-3 to Stockport in the 2008 final, Rochdale AFC have put their foot firmly in the lasting impressions camp.

We certainly don't want to see them again at this years final though. Having famously spent 35 years in League Two/Division Four/Basement Division call it what you want, Dale are now - as I type - top of the league, 8 points clear of Rothers in fourth place with just 18 games to play.

If Rochdale do gain that illusive promotion, then manager Keith Hill will surely become the biggest thing to come out of the town since Cyril Smith. Their fans in Lancashire keeping everything crossed that this team really could be the 'Dale of the Century'.

To celebrate their efforts this season and to help spur them onto success, we dialled up Colin Cavanah, Editor of RochdaleAFC.com to find out a bit more about The Dale:

What is the best thing about supporting Rochdale? The best thing about supporting Rochdale is that we are a million miles away from the Premiership. We're supporters, not customers, and we genuinely feel like we're part of the club. We enter each season believing we have a genuine chance, and each game with the hope of victory, rather than these Premiership sides celebrating wildly at goalless draws.We do things properly, live within our means, and when things get tight, we budget accordingly. 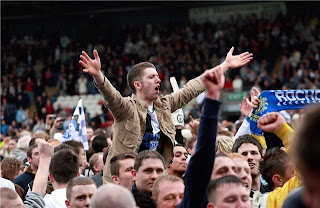 Supporters not customers.
And the worst? The worst thing is competing amongst a set of clubs who operate under a different set of rules. Teams who make signings above their station, prospering as a result before going down the easy route of administration not long after. When we reached Wembley in 2008, we did so despite having to sell our top scorer. Opponents Stockport beat us, yet found themselves unable to pay their way within weeks. Until the FL get to grips and start relegating sides, it will continue to happen.

What is the RAFC support like in terms of numbers and noise? In terms of home supporters, we get anything between 2,500 and 3,500 depending on all the usual factors like League position, weather, time of the year etc. Like most sides in our division, home support is usually quiet at the best of times, with the vocal support usually coming on our travels. For a few years, we've had the best away support in terms of percentage of home support apparently.

What is the away allocation given to fans at Spotland and do any teams in League Two ever fill that? Rather bizarrely we give our best stand to away fans, meaning that they have over 3,500 seats for away supporters. It's not been filled for a League Two game as of yet, but a couple of sides have come close. Hartlepool probably were the closest when they came chasing the title a few years back.

Who have been the best fans to visit Spotland this season? It's always tough to judge the best away fans. In terms of noise produced, it was undoubtedly Accrington Stanley, but they're an example of one of those horrible facebook group created sets of supporters which always feel a little bit manufactured. Sadly, they've inspired a number of copycat groups at other League Two sides. 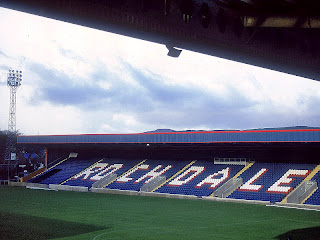 Spotland the Brave
Who are RAFC's rivals? Can't look further than Bury on this one. Separated by about six miles, it's one of the closest derbies in English football (ignoring those where it's 2 teams within the same town or city). The geography of so many football clubs in the North West area can see rivalries come and go depending on who is in the same division. For many supporters, Oldham remain the long term rivals but we've not played them in a League in most supporters' lifetimes.

Sadly, there has been crowd disorder in recent games with Bury hasn't there? I think that's giving it too much importance. It's the usual story that the heavy police presence allows certain groups from both clubs to act all mouthy and play the hard man routine knowing full well that the Police have things well under control and that there's no chance of breaking through the Police lines for an actual confrontation. Unfortunately, the 99% majority suffer with pub closures and early kick offs because of this.

Do the majority of people in Rochdale support the local team? Yes. Apart from they think the local team is United or City. You get many a City supporter in Rochdale pubs, complaining that United fans don't come from Manchester ignoring the obvious irony. I suppose given our history, we don't do too bad for supporters, with the crowds these days massively up on the crowds I grew up with back in the 1980's.

What is Rochdale like as a town? It's not great. It perhaps speaks volumes that the most successful thing about the town is the Football League's least successful club.

What pubs would you recommend in town if the EFW team came to visit Spotland? Spotland is a great trip if you're coming for a drink. There's not many clubs with a proper, genuine, not club owned pub built into the ground (The Dale Bar), and there's a pub about thirty yards from the away end turnstiles with a chippy en route (The Church Inn). Slightly further afield is the Cemetery which is legendary in the real ale circles. 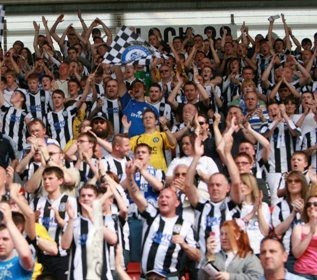 Hands up who fancies a pint in The Dale Bar!?
Tell us about the Dale Trust. It's not as well run as it used to be. Seriously, they do a fantastic job and are very well respected within the fan base. I think they've got the correct balance between working with the club and working on behalf of the supporters. There's no ambition on their part to own the club, but there's enough shareholding to allow them to stick their nose in and have their say. Perhaps just as importantly, the club themselves look upon the Trust in a very positive way, and are happy to work with them.

Famously, you've spent 35 years in the same division - a fact you must be sick of. There is going to be on helluva party if you go up this season isn't there? I don't think anyone can actually predict the sort of scenes that there'll be. All these years have led to a very cautious outlook, and we're not going to make any sort of preparations as to what might happen. Let's wait for it to be mathematically certain first.

What has been the best moment in RAFC history to date? From a personal point of view, it was the season where they introduced relegation from the Football League. At one point, we were dead and buried - six points adrift at Easter. However, a little lad called Lyndon Simmonds joined us on loan from Leeds and provided us with one of the most remarkable comebacks to ensure League survival.

Do you like the fact you share the ground with the local rugby league club - The Hornets? In an ideal world, yes. It's allowed both clubs to obtain grants to improve Spotland from a ramshackle shed into a super little stadium. However, the last few years have seen the Rugby Club been nothing but trouble, with their lack of contribution over the years a real sticking point for a large number of Dale supporters. When they went into administration last year, we lost out to the tune of around £80,000.

Can you sum up Dale in a Tweet of less than 140 characters? Is that like a Facebook status thing? This dog is currently having its day.

I think most neutrals outside of Bury will join us in wishing Dale all the best for the remainder of the season. The EFW Team have definitely got the last game of the season - away to Barnet on May 8th - inked in our diaries. 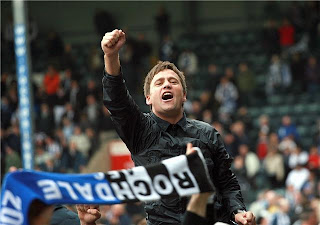 See you at Barnet our kid!
Thanks to the Rochdale Observer for the photos and of course Colin for being so generous with his time.

As a postscript to this article, we had a little competition to see who could fashion the best headline out of "Dale" on the EFW Facebook and Twitter site today. These were the best of those:

Dale of the Century (Faye Francis)
Dale Win, Son (Peter Styles)
Dale or No Dale (Big Deaks)
The Campaign For Real Dale (Peter Styles)
35 Years in the Dale-drums almost over (Jamie Maclean)
Give us this Dale, our Daley bread (Neil Park)

Fantastic article, makes a really good read...although I may be slightly biased as a Rochdale fan!

Proud to support the club and hope Hillcroft can take us up this season and continue with the 7 year plan!

Am a lifelong Dale fan (since the early 60s). Great article showing what being a Dale fan is all about. We have kept the faith through thick and thin and there has been a lot of thin! The current halcyon days are all the more appreciated not just because we are playing scintillating stuff (living the dream whilst it lasts)but when 'normal service' resumes the legacy will be a new 'normal' not the mediocrity of old. My other team is Arminia Bielefeld (Rochdale's twin town)currently promotion chasers in Bundesliga 2. Re EFW look out for them. Also unfashionable but with a loyal following. You'll be welcome as I was (v VFB Stuttgart a couple of years ago). Like Rochdale, they play in blue and black.