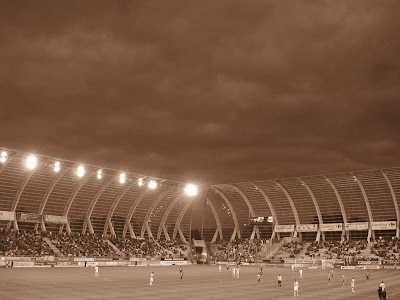 The coach turned onto Buckingham Palace Road. “Thank fuck we’re here” came the mackem accent from behind me, “I’m never doing that again” it continued before morphing into a yawn. Six hours previously that same voice was locked into a shrieking cacophony of laughing, the owner having got on at Durham amongst a group and spent the first stage of the journey to London disturbing the sleep of those around them. This was the first horrific stage of the Les EFW, the first major event of the 2011/12 football season.

Ideas had been floated for months. Flights checked, fixtures referenced, maps pawed over. The plan had formed to leave from London in the car and do a loop from Calais with as many games as possible sandwiched in. Disaster had struck a few weeks ago when the Lens versus Troyes game was moved to Saturday afternoon leaving us with a frantic search for a replacement game. “Amiens are at home and that isn’t far”, Danny Last had text me. “Aye” I replied, “and it’s a cracking night out apparently” I offered, not quite remembering where I had heard that bit of information.

With time to kill while I awaited Messrs Last and Fuller, I wired myself on coffee at Victoria Station before getting over to London Bridge, the start point of the trip. A pint down in All Bar One opposite the entrance and we were off. Before long, the southern English countryside was replaced by the English Channel and we were queuing for the ferry. Entertainment came via head-scratching as we tried to work out how to correctly apply the stickers on the car head-lamps. With Stuart off in search of a car that was already sorted so that he could copy, Danny and I stood like a couple of spare pricks in a ferry queue. Not to worry, minutes later and we were ordering the first beer in the bar of what is a four-pint-journey.

“Drive on the right; drive on the right” focused Stuart as we rolled off the ferry ramp. French countryside appeared and disappeared as we covered the miles south to Amiens; the toll road, fairly empty, was used as we sped towards our destination. Cash paid, we pulled off the road and over to the right was the Stade de la Licorne, rising up like a space craft. We parked up, noticed that the ticket office was still shut and so decided to go and check-in at our hotel, a few miles away. 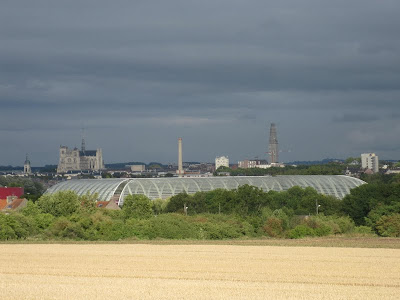 The Stade de la Licorne, rising like a space craft, tick
With bags dumped in the room we hit the bar. Sickly, sweet Kronenbourg necked and we retraced the journey back to the stadium, passing a coach of Le Havre fans singing next to the toll road payment machine. After handing over our 10 Euros for a ticket, we wandered around the ground before queuing for some food. Weighed down with a mountain of chips, we headed up the stairs and took our position standing at the back just as the teams came out. The small section of Le Havre fans waved their flags; the Amiens fans in the VIP tent to our right afforded a polite ripple of support and the 12 year old at the front of our stand led the home fans in the middle section into generous singing; the football at Les EFW was underway. 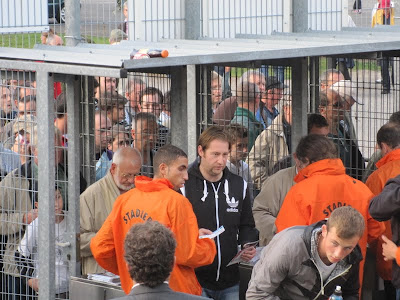 A shifty looking character in a black ultras top from Primark, we'll call him Andy Hudson, eases through security
Eventually we became bored by the chips; after 5 minutes of non-stop eating I was still no closer to finishing them. As another fan emerged up the stairs clutching the very large brown bag, a plastic fork sticking out of the top, I binned my package and took a swig of the freshly poured beer that was on the bar. It wasn’t sickly sweet like the one at the hotel, but it was watery. Was it non-alcoholic beer? We conferred, debated and thrashed it out before deciding that it must be. With beers downed, we headed to a seat at the front of the stand to watch the match. 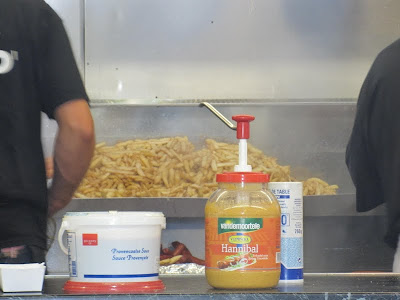 Une montagne de frites s'il vous plaît
Neither team attacked with purpose; as such it was no surprise that a cagey first half finished goalless. The atmosphere was muted, the downside of the stadium design being that noise isn’t retained inside the stands, merely it floats upwards and out over the night sky.

“I reckon we could get a beer in that main stand” said Danny, just as the referee signalled for the end of the half. With the main stand being posher seats and a few Euros more expensive, we made our way to the back of the stand, talked as we passed security and headed straight up the stairs at the back of the main stand. Passing the back of the VIP tent, situated just next to the bar, we passed a couple of chaps drinking a beer. “Your beer, does it have alcohol in?” asked Danny, slightly affecting a French accent. “Oui” shot back the reply. “We’ll double up on this round then. Quattro beers s’il vous plait”. 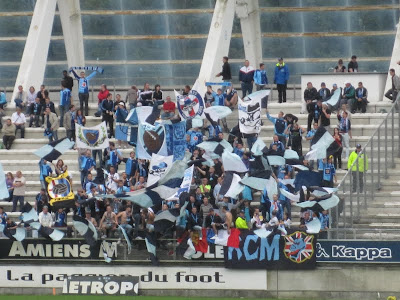 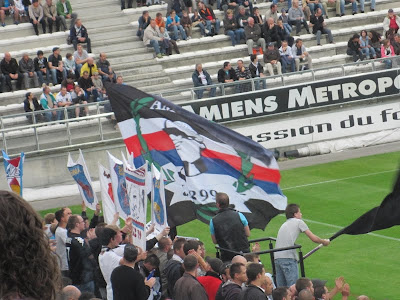 The home support with, possibly, a little less of that passion...
Taking seats at the bottom of the main stand we took a gulp of the beer. “This is bloody non-alcoholic” we all cried out at once. With no alcohol to mess with our memory, we took to the football again. The Amiens ‘keeper sported an awful football strip with a pink top topped off by some logo of a cow or something on the front. As a result of this fashion disaster, it was no surprise that the visitors took the lead after 62 minutes. Football has a simple rule: wear a disgusting top and you will get beat.

Le Havre broke away down the left and a cross that initially appeared to be hit too deep as it dropped over the run of the forward coming in to the near post area, turned out to be delivered to perfection as it landed perfectly at the edge of the box for Ryan Mendes to volley home. That was the only goal that the crowd of 8,862 witnessed as the game soon reverted back to both defences dealing with attacks with ease. 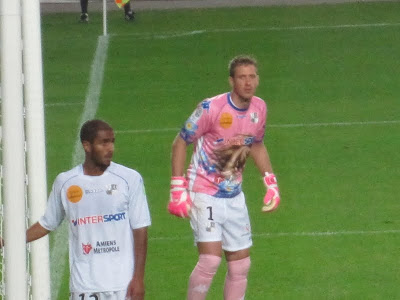 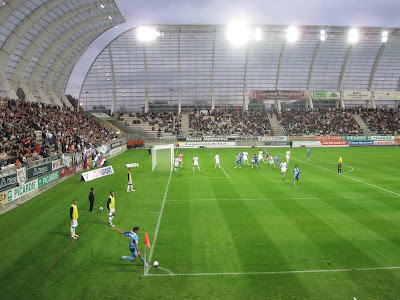 Oooh ... it's a corner
Having heard that Amiens was a good place to have a beer, I was looking forward to sampling the bars. We headed back to the hotel, dropped the car, called a taxi and were soon in amongst it. We had been told that there was a street of bars; the street turned out to be rather small. The street was actually a corner. We started off in one bar and after wandering over the bridge we scanned the menu while we sat at a table. “The beer’s almost 7 Euros a pint here!” “Shall we vote with our feet?” came the reply as all three of us got to our feet. “Is that a pub over there?” “Na, it’s a hairdressers”.

The pub decision was an easy one to make in the end. One bar seemed popular and with a spare seat outside. As Stephen Hawking rocked out on the dance floor inside, we chatted over beers outside. A table of local youngsters sipped their way through cokes and beers while a very drunk lady wearing a sailor hat and with huge holes in her tights bounced around from table to table.

With the night getting late and with an early start to Lens the following morning, we started to finish off our beers. We had been left by a few people who had joined our table to chat, when eventually she got round to our table. “Where are you from?” a voice slurred. We looked up and noticed a sailor hat. “Are you fuckin’ bullshitting me? You are from England? Do you think I’m pretty? Shake it baby – yeah!”. 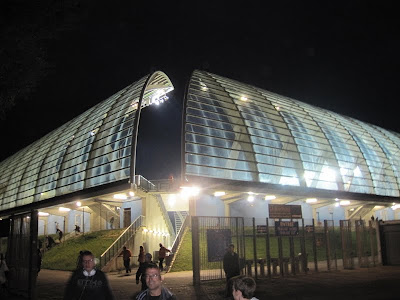 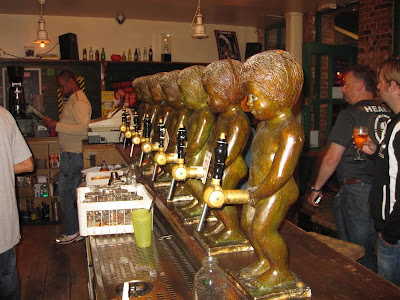 ....Bonjour Le Pub. €7 a pint? Were they taking the piss?
For lots more photos: CLICK ME
Follow Andy Hudson and European Football Weekends and The Ball is Round on Twitter.
Next up .... we went to Lens v Troyes ....
Posted by Danny Last at 12:21

A nice aperitif. I like the official 4-pint measure of the ferry trip. What would Newcastle to Bergen be, or Mallaig to Skye even (it's 1-pint) ?

Don't tell me you missed all the bars near the cathedral and the fountains ?

Fancy the content I have seen so far and I am your regular reader of your blog.

I am very much interested in adding http://europeanfootballweekends.blogspot.com/ in my blog http://southafrica-2010-fifa-worldcup.blogspot.com/.

I am pleased to see my blog in your blog list.

Hope to see a positive reply.

Thanks for visiting my blog as well !

Waiting for your reply friend !!!!!