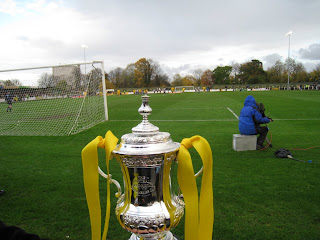 If loving the FA Cup is wrong, I don't want to be right. It's the worlds greatest competition and no mistake. So a chance to visit Gander Green Lane to witness a sniff of a giant killing act for this FA Cup 1st Round proper was to good to turn down for Cynical Dave and I.

As has been the case nearly every weekend since about 1972, the train journey northwards from Brighton was marred by four words that strike fear into every fan of public transport: 'Rail bus replacement service'. However, during those deeply disturbing moments, the thought of a possible sighting of a home made silver foil FA Cup at Gander Green Lane lifted our spirits. 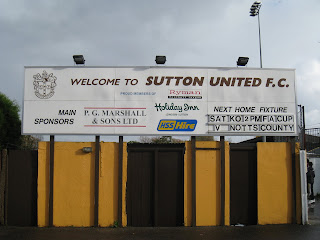 Upon our arrival at the ground, I picked up my press pass (thanks to Tony Dolbear for that) and headed into the press box. In the interest of keeping things real I actually turned down the opportunity to sit in the press box but I had noticed Tom Watt sliding into the ground before me so I popped in to have a chat with him. I don't think Tom will mind me telling you he used to play Lofty in Eastenders in the days when people actually used to watch it. Nowadays he broadcasts for BBC Radio London amongst other things and is not only a brilliant broadcaster but a thoroughly nice chap. He is the sort of bloke who you'd like to sit down the pub with a couple of pints of Guinness and some mini cheddars and chat for hours.

Anyway, enough of stories of swanning around press boxes and chatting with the stars, what about the pre match beers!? Well, as luck would have it, Sutton have a rather splendid clubhouse next to the main stand. Every club at this level needs a bar to help along with the finances and Cynical and I contributed a healthy amount of money behind this one in a bid to quench our thirst. The beer was excellent and the service was fantastic so full marks to SUFC on that score. 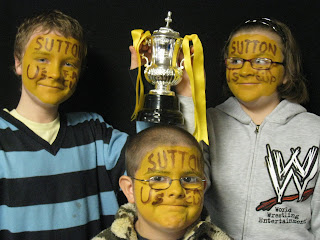 Sutton fans feeling the magic of the cup - good on yer kids!

Whilst sinking our ale Cynical and I discussed Sutton and what it's famous for. Episodes of the Bill are often filmed there and rotund, Welsh hymn-singing, Sir Cumference Harry Secombe called it his home but of course, ask any football fan about Sutton United and one match stands out a country mile. In 1989 Coventry City went from lifting the FA Cup the previous year to an ignominious defeat in this part of leafy Surrey the next. Sutton's 2-1 victory over Coventry City is part of FA Cup folklore and fans were rightly still harping on about it in the bar during our visit.

The walk from West Sutton station to the ground is only 100 yards or so. Good news for most people but not for Cynical. There was no bookies to be found and the blood was starting to drain from his face as he'd yet to place a bet of any kind. Luckily, help was at hand in the bar. He managed to buy a handful of scratchcards, enter a guess the crowd competition and for good measure he purchased two golden goal tickets. These were folded over so you couldn't see which two minutes he had got, so just to prolong the agony we decided not to unveil the minutes until the first goal had been scored. We don't get out much you see. 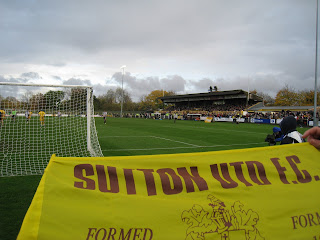 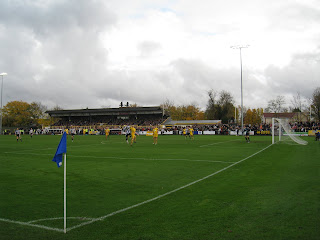 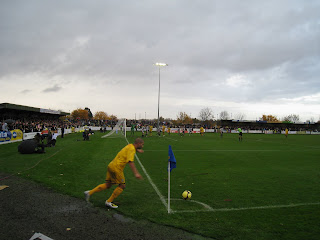 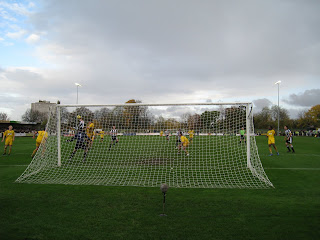 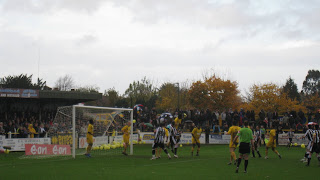 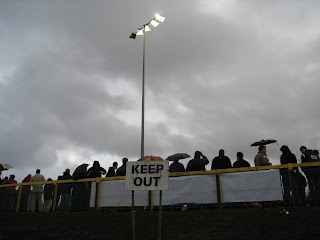 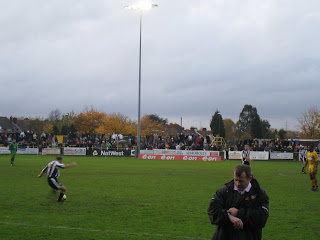 Notts County had brought around 350 fans. Most of these had congregated in the main stand and were in fine voice. They sang their famous wheelbarrow song, a little ditty about Jimmy 'The Squirrel' Cyril and my favourite which was 'I wanna beeeeeee Notts County' to the tune of Anarchy in the UK by the Sex Pistols. A good effort lads.

Sadly, there were not too many silver foil FA Cup in evidence. We are armpit deep in a recession and in a recession, the first thing to go from the household budget of even the most dedicated football fan is the homemade FA Cup. Still, there were plenty of flags and yellow balloons and one family had brought along their own plastic FA Cup which was extremely pleasing. Mercifully, jester hats were also in short supply. These things clearly have no place at a football ground. Anyone who does choose to wear one and is over the age of let's say 20 should be put in a sheep pen as far as I'm concerned.

I won't bang on about the actual match itself too much. Suffice to say Sutton did their fans proud with their efforts. For long periods it looked quite likely that they were going to win. I guess Tom Watt was waiting to launch into his Norwegian commentary bit for BBC London 'Derek Randall, Donald Pleasance, Leslie Crowther, Friar Tuck, that bird who played Reg Holdsworth's missus in Corrie, Dale Winton. Can you hear me Dale Winton!? Your boys took one hell of a beating'.

Notts County had other ideas though and in the 75th minute, Jamie Clapham swung over an inviting cross for Richard Butcher to nod home. Sutton fans buried their heads in their hands as the County fans celebrated as if it were 1999 (again).

The stadium announcer then boomed out: 'In the 75th minute, the scorer for Notts County, Richard Butcher'. Hold on a second, what about our golden goal tickets!? Cynical reached for his pocket and pulled them out. A deathly silence descended on the terrace as the first ticket was unveiled. 74! seventy-sodding-four! Would you believe it!? With a look of disgust and a rolling of the eyes, Cynical then made a dash for the next ticket. Time stood still as it slowly revealed the magic number. 75! seventy-bloomingwell-five! That's it! We're rich! hold the front page! Where's the bar!? 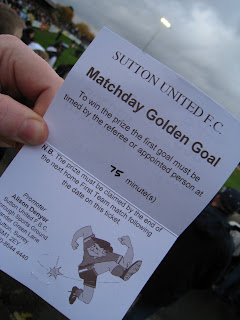 After the match we made our way into the Sutton megastore to collect. The well stocked club shop is run by Alison Denyer who is the SUFC Supporter's Club Chairman and a delightfully friendly and bubbly character to boot. She handed 20 of your earth pounds over to a beaming Cynical and all of a sudden, standing in the thumping rain for 90 minutes seemed a distant memory. 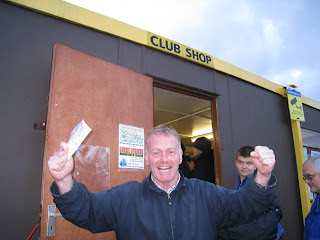 Does life get any better!?

Naturally, we ran back to the bar to celebrate our good fortune. However, our plans for a mental night were dealt a cruel blow. A sign on the window of the aforementioned clubhouse read thus: 'Under fire regulations party poppers are NOT permitted on these premises'. How's your luck!? Cynical's first golden goal win ever and no party poppers. Oh well, back to Brighton we headed and into our favourite pub The Lord Nelson. There we had what can only be described as 'too much to drink'. We'd headed out in search of the magic of cup. Sutton United had sprinkled a bit of magic on us and we'd enjoyed our day out there - good luck to them! 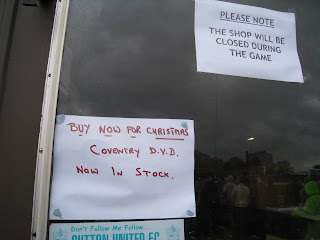 Congratulations from a Notts County fan on winning the Golden Goal competition - glad our Butch helped you out there!

Believe it or not, earlier on in the season we were doing rather well at 11 games unbeaten - I don't know if you caught us live on sky sports against Brentford on the 13th October but we were very good that night.

However Notts have suffered a bad run in form of late, losing three games in a week, one of which I saw and was not impressed. Hope we get better soon!

I'm glad we made it through this game anyway, it sounded close at times on the radio with them having a few chances - good luck to them in their league, sounded a decent team.

Onto the second round we go though to play Lincoln or Kettering and hopefully on to round three. Thanks for mentioning the Notts fans too - we do our best!

Good luck to Brighton and Hove Albion also (except if you play us in the cup of course.)

Glads you enjoyed the day out at GGL. Should have said hi on our forum beforehand, I'm sure we'd have been able to get you in the bar afterwards!

Jammy sods on the golden goal though. I haven't won that in years! :)