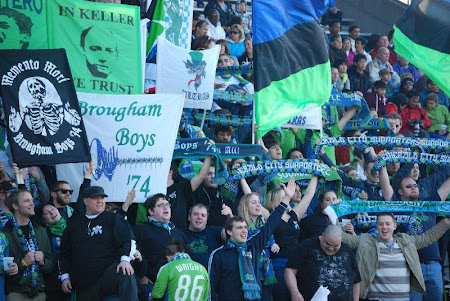 Football is nothing without fans
EFW covered the incredible rise of Seattle Sounders last season with interviews and their attendance figures are indeed impressive. When we did so, we were also inundated by Portland Timbers fans who left us in no doubt as to the intensity of the football rivalry, showing us that the Americans at least get that bit.
Then, the clubs were in different leagues, but Portland and another side from the Pacific Northwest, Vancouver Whitecaps, are set to join MLS in 2011, giving the fans the chance to resurrect the rivalries and better still travel to away fans and experience that awayday feeling that is the core of football culture.
You would think that this is something eagerly anticipated by all. Sadly not. Sounders FC's majority owner, Hollywood director Joe Roth, has threatened to restrict away fans to just 150, the minimum under MLS requirements despite Seattle's Qwest Field having 28,000 empty seats for every home game.
We asked Steve Clare, the editor of Prost Amerika the only site that covers all three clubs, what the hell was going on:
Can you sum up what the battle is about? Next year three sides from the Pacific Northwest, an area we refer to as Cascadia after the mountain range, will play in Major League Soccer. They are about a 3 hour drive apart and all three cities have a long (for America) history of football and of rivalry. All three were members of the old NASL in the 1970s. With Vancouver and Portland about to join, these rivalries will be resumed.
Sounds great, what's the problem? Your readers will know that the publication of the fixture calendar is a moment awaited with high anticipation to see when the derby days are, especially those away from home. That anticipation stands threatened by a policy of restricting away fans to just 150.
Where does the 150 limit come from? It's an MLS mandated number but fails to take into account the long history of football rivalry and indeed away day traveling in Cascadia.
Who's making the threat? No-one had said it outright until yesterday but conventional wisdom suggested that the Seattle Sounders are the moving force behind this. Their majority owner Joe Roth advocated such a policy in a meeting with fans, and Vancouver's top guy Paul Barber has indicated to Whitecaps fans that he is more sympathetic to their wish to watch their side in Seattle and Portland. Portland owner Merritt Paulson was articulately coy when I asked him about it in an interview. Yesterday, a unified statement released by Portland’s Timbers Army, Seattle’s Emerald City Supporters, and Vancouver’s Southsiders specifically pointed the blame at Sounders FC. 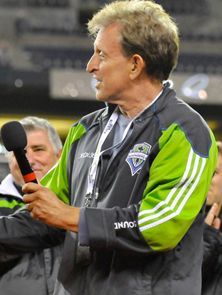 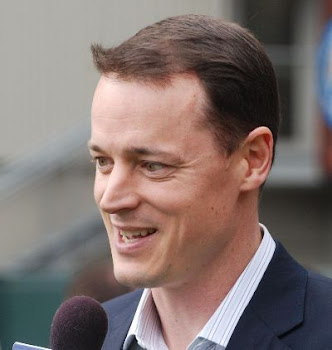 Credit where Merritt's due? Portland owner Merritt Paulson (Photo: Allison Andrews/soccercityusa.com)
How have fan groups managed to stay united given the hostility I observed on EFW when I first interviewed you? Their love of the sport is stronger than their hatred of each other! Seriously though, despite their reservations, all three groups have really risen to the challenge of putting the common good first. I hope that's what your readers take away from this as a better indication of the strength of, and love for, the sport here. Most of them were here for football before MLS arrived and will be here for the sport until they kick the bucket.
Are the three clubs united or is it Seattle v the rest? The evidence seems to suggest so but neither of the other two clubs has said so publicly. So far the three ownership groups are not criticising each other publicly, but internal discussions between the owners of Vancouver and their Southsiders group, and the Timbers and the Timbers Army, certainly suggest that neither of them is aggressively promoting a travel ban. Joe Roth and Sounders GM Adrian Hanauer have supported the policy more publicly. The unified statement form the three groups fingering Sounders FC though probably opens a new chapter. Portland and Vancouver fans will be asking for a clear statement form their own clubs, almost certainly based around the 5% rule.
What if Portland sell more than 95% of their capacity to Season ticket holders? The figure needn't be 5%. My gut feeling is that a lower number might be acceptable to some, but they could also sell a 15 (MLS will have 17 home games next year)game package that excludes the derby games for a cut price. With vision and creativity, there are ways to make this happen without the clubs leaving a single seat unsold. 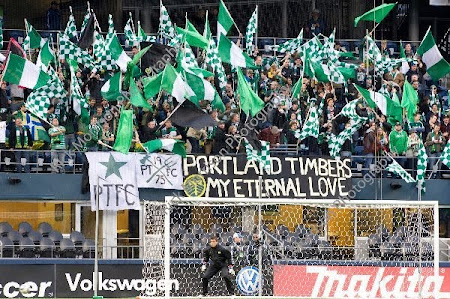 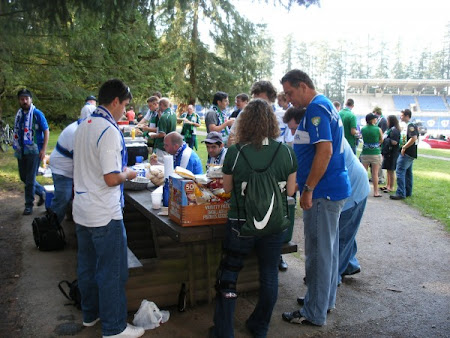 Just to clarify, Vancouver's ground (the soon to be renamed BC Place) will have 54,500 seats after renovations, leaving plenty of room for Timbers and Sounders supporters who wish to travel. Whitecaps FC have currently sold just over 15k season seats and the renovated stadium can be temporarily upsized or downsized on demand (as is the case with Quest Field). While this leaves Portland as the only club that wouldn't be able to handle large numbers of travelling supporters, I'd still rather see Vancouver and Seattle allocate thousands of tickets to Timbers supporters if the demand exists.

As a Whitecaps season ticketholder, I can honestly say I don't know anyone here in Vancouver who wouldn't welcome a sizable contingent of away supporters and the fantastic football atmosphere this would create. I hope the Sounders owner will reconsider his position on this issue.

As a Sounders supporter, I disagree with the ticket policy and welcome away supporters. But I just wanted to point out the irony (and possible ignorance) of an article claiming that there is no reason for concern whatsoever with a few thousand visitors from these two particular "generally law-abiding cities," and the nonchalant assertion that the SPD can handle it.

There is still visible damage--within a few blocks of Qwest Field--from the last such visit, and the SPD certainly hasn't forgotten.

What damage would you be speaking of? The visiting supporters were herded in and out through a separate entrance and back onto the buses parked inside Qwest grounds. The main group of supporters never left the fenced off Qwest grounds.

The only incident I recall past that was posted all over Seattle's newspapers when some idiot Timbers fan got mouthy while he was all alone outside of the ground with some idiot Sounders fans and got punched up. I'm not aware of that being remaining visible damage.

I'd be willing to place a dollar that worse incidents off field happen with the meeting this weekend of the Washington Huskies and Oregon Ducks.

@Doug - Thanks for that post mate. Armed with those facts, it reinforces my feeling that it would be a complete folly only to allow 150 visiting fans for the big 'derbies' next season in Vancouver.

As for the other two posts - conflicting arguments. Either there has or hasn't been major trouble between the fans in the recent past? And we're not talking about one or two people having a pop at each other. That in itself shouldn't stop thousands of law abiding fans enjoying a game of football.

I know the incident the poster is refering to very well, having both seen the police report and spoken with Sergeant Whitcomb from the SPD about it.

It seems that in anon's desire to use this issue for a petty tit-for-tat between clubs, he has confused what happened with what he wants to have happened, or perhaps from what he read on a chatboard.

Three locals decided to pick on a Portland fan who was soon helped out by other Sounders fans nearby. There was no 'visible damage' and the Portland fan was not the instigator of any violence.

Incidentally, those 'Sounders fans' were certainly not ECS members and would have been thrown out if they had been.

So not only is the poor lad inventing stuff from his Green Street fantasies, but he misses the whole point of this story, which is that fans of all three clubs are putting the good of the game and the growth of the sport, above club rivalries in the most mature way.

And yes, you'd see far worse at other sports.

Another Sounders season ticket holder here to voice support for the away travelers. I plan to travel to Portland and BC next season, and I will buy whatever tickets I have to in order to see the games. Similarly, I hope to see a lot of Timbers and Whitecaps fans in my stadium for our home games.

The FOs of the clubs will have to recognize that they are leaving money on the table by restricting these sales, and while I see plenty of nicknames on the community sites for P'land and BC fans, I have never seen anyone looking to start physical relations with fans of rival clubs.