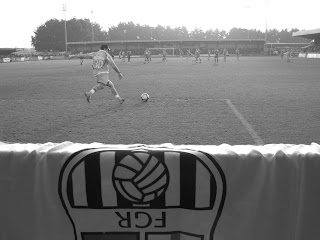 I last frequented this ground 16 years ago (alright Grandad - Ed). Back in 1994, Kingstonian FC delivered a swift blow to my nether regions by humiliating Brighton & Hove Albion and dumping them out of the FA Cup. What happened in the immediate aftermath of that game is stuff of Albion legend. I can't tell you exactly what occurred though because I'm still bound by a super injunction and they never get overturned these days do they?

It took the visit of Forest Green Rovers to prompt a return visit. I've always been a fan of the Rovers Return. Previously on these pages, you may have noted us gushing over FGR and moreover their fans. They've become firm friends since we pitched up in Nailsworth last season. A group of them ended up forming the backbone of the EFW Oktoberfest, a legendary trip that saw 32 of us take in four games in three glorious days in Germany and the Netherlands last year.
Kingstonian now share this Kingsmeadow ground with their (now) more successful tenants - AFC Wimbledon. The Dons fans have renamed it the Meadow of Kings. A fair call when you factor in five promotions in seven trophy hogging seasons. I'd say the vast majority of football fans have a soft spot for AFC Wimbledon and what they've achieved in recent history. There are some who don't approve - this is football after all. Arrogance is the word that keeps getting quoted to me by non-believers.
So what is the AFC Wimbledon matchday experience like? Well, with my professional hat on, I turned up three hours before kick off to drink in the atmosphere with the FGR lads who'd made their way across the country in the early hours of this Saturday morning. The first pub of choice was the infamous Sir Robert Peel, infamous in that some girls inside have been known to remove their clothes for just 1GBP. It's all above board like - honest guv. 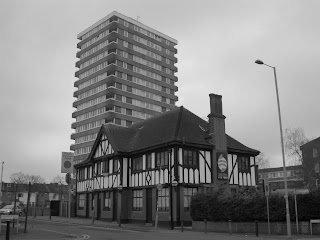 The Peel pub: FGR fans, a few Dons and a couple of Bristol Cities. 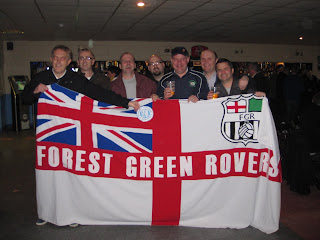 The Nailsworth branch of the EFW Team. Great set of lads. 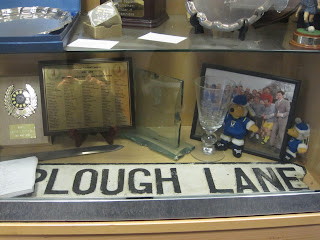 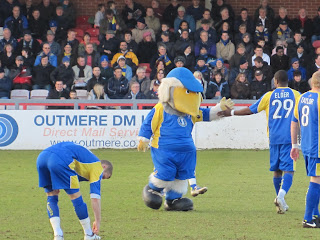 Hayden, the lesser seen three legged Womble.
The FGR fans were in good spirits and fine voice. After a rousing rendition of Sweet Caroline (good times never felt so good), it was onto the amply sized clubhouse at the ground via the best eatery in town - Fat Boys Cafe. How happy would you be if Ska band The Beat pitched for a gig in your clubhouse!? That's exactly what's is about to occur at Kingsmeadow in a couple of weeks. Pork pie hats and mirrors in the bathroom that night and no mistake.
What about the actual game then? (finally - Ed). Well, AFCW raced to a 2-0 the lead within 9 minutes following some fancy free flowing football. Rovers fans began questioning their gaffers team selection. One turned to me and said he'd made the single biggest error of judgement since Wayne Bridge uttered the fateful words to his lingerie clad mademoiselle "I'm just of to see my dear old mum for a few hours. My mate John is popping round to borrow my socket set. Let him in will you?"

As the game opened up, the Dons midfield began making good use of the space that they found, space that the everyday FGR folks left behind. Talking of *cough* The Wombles, as the game petered out late on, there was only thing on the EFW agenda. We have a bit of thing for clubs mascots and Rovers fan Pearchy is an expert in luring them into his den. The Dons have a tremendous mascot in Hayden the Womble. Could we sign him up for EFW.... 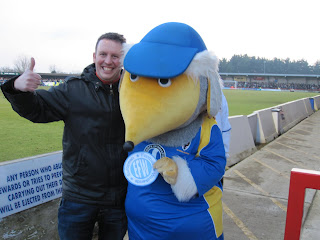 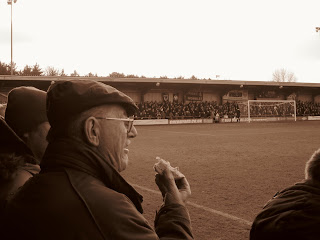 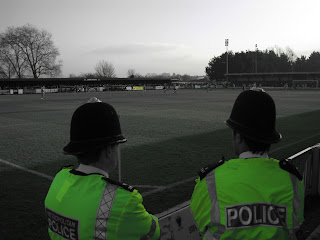 These two were first in the queue for tickets to The Beat. 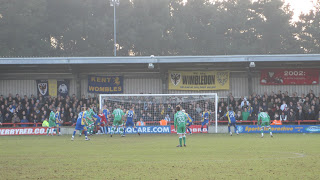 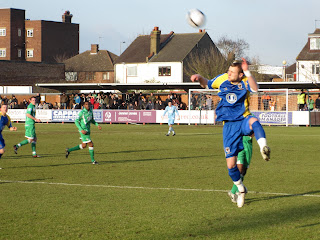 On the head my son.
After the match, we past the masses queuing for tickets for the away game with Luton next week and returned to the clubhouse. Speeches, MOM awards, mirth and hilarity, this was football as it should be. With a successful Dons Trust, the best badge seller in the country, an award winning programme and forthcoming away games at Luton Town, Cambridge and Oxford, there is a real feelgood factor surrounding the club. I just hope the fans stick with them if the trophies start to dry up. Rovers on the other hand appear to be dropping faster than John Terry's shorts. They'll be back - hopefully.

Just before I leave you (at last - Ed). We covered AFCW earlier in the week here on EFW. So in the interests of balance, here is the result of a chat that FGR fan Shep and I had over a few beers prior to the match:

What's the best thing about supporting FGR? It's in my blood. Was brought up watching them from 5 years old so it's always been there. It's local, a good social occasion and I've made a lot of friends over the years that I would have never crossed paths with unless it
was for FGR.

And the worst? The football at times. I've been lucky to see us go from the Hellenic League
up through to Conference but at this level we are perennial strugglers and this season we seem to be doing it the hard way. Off the field the club, like most, is struggling financially so it always seems the begging bowl is out. I do think we get taken for granted at times and that's a dangerous game to play.

What has made you laugh in your times of following Rovers? I can't think of much on the football front but away trips, generally on the train are always a laugh as it's the people who make it. I could recall stories of Hitchen Town away, Gary and Shaun (actually Shane) at Cambridge station, pubs of London and numerous other trips but even great times when
we used to share the players coach in the Southern League.

According to Wikipedia, Forest Green Rovers have a rather greedy 6 (six) nicknames - Rovers, The Green, FGR, The Little Club On The Hill, Green Army and *cough* The Lawnmowers - which of those are embraced by the fans? 'Rovers' is the one most relate to, although when speaking to people after a game they always seem to ask - Have you been up The Green today? Not sure on the 'Lawnmowers', I think someone might have been on the wind up there.

Who are your rivals? Historically it would have been Shortwood United our neighbours across the valley but Gloucester City would be number one in most older supporters
eyes. Nothing stirs up the blood more than Oxford United now for me though.

Can you sum up FGR in a Tweet of less than 140 characters? A club that's changing to adapt to the times but I'm not sure I like it. We still try and make the best of it though.
- For more photos from the day CLICK ME -
- AFC Wimbledon Part 1 -
Follow EFW on Facebook and Twitter
Feel free to comment below

Didn't get a chance to talk to any of the FGR fans yesterday (I was stewarding over by the dugouts as normal), but I have to agree with your assessment that they are a great bunch. Our trip up to the New Lawn was a great day out and the locals were very welcoming and friendly even after we had won 5-2; one even stopped his car to offer a couple of us a lift to the station (which was out of his way) when he saw us walking to Stroud ...

One small correction, if I may?

The ground was purchased from Khosla, and is now owned by AFC Wimbledon Stadium Ltd, so Kingstonian are the tenants.

Thanks for your comments lads!

@Chalfers - Stewards were excellent yesterday. I liked the 'loose' segregation policy. An away section but with fans able to walk freely around the ground if they wished. Treat fans with respect and there is seldom any problems.

@Anon - Thanks for clearly that up old chap. Is there a good relationship between the two clubs? Are they 100% happy with the arrangement?

I loved the flags in the home sections by the way. I forgot to mention them. I believe there is one guy who makes them all and he's done 50 or more.

Tis true just the one guy does all the flags - do a web search for Fleydon.

Regarding the relationship between the clubs it appears to be amicable. Unfortuately you will always have reactionaries on both sides who will say otherwise but the main majorities get on with it. If we were in the same division then things might be a bit more...umm, vociferous.

Naturally they would like their ground back; ideally we'd like to get back to Wimbledon (FOC if possible ;-); and the status quo would be restored.

That though is going to take at least some time, if possible

Well worth a look.

I attended when FGR came up to Meadow Lane in the FA cup and thought that FGR had a great game and were it not for a great strike by Hughesy and some world class goalkeeping from Kasper they could have snatched a replay, but it finished 2-1. Fans were an excellent bunch as well, very vocal indeed, I wish them luck for the rest of the season.

I was very saddened to hear about the FGR fan who collapsed outside the ground and passed away as well, particularly as I walked past when the ambulance arrived and wondered what was going on!