No Battle No Victory
Scarborough Athletic 0-1 Thackley
David Bevan of The Seventy Two blog visits Scarborough Athletic at their temporary home in Bridlington. EFW has been a long term supporter of Scarborough's bid to raise awareness of the club's lack of permanent home, and we're all over their bid to return home to the borough of Scarborough:
The emotions of Scarborough Athletic Football Club are inescapable. Sadness at the demise of its predecessor, Scarborough FC. A growing hope that the two clubs formed in its place will find common ground and unite to restore a strong, single football team to Scarborough. Slight frustration that this cannot happen sooner. Above all, perhaps, pride in the efforts of the men currently wearing the red shirt as they bid to drive Scarborough Athletic up the divisions while, off the pitch, progress is also being made.
The unfortunate recent history of tension surrounding the two Scarborough sides, Athletic and Town, has been well-documented. Last Tuesday night, the emotions again ran high as small-scale violence broke out after Scarborough Athletic knocked neighbours Bridlington Town out of the FA Vase with two late goals. Neighbours. Northern Counties Eastern League Premier Division rivals. And landlords. 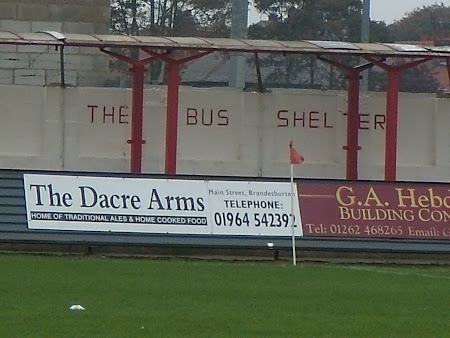 For now, while work continues on returning Scarborough Athletic to their rightful home, they play home games at Queensgate in nearby Bridlington. Queensgate is an impressive little ground, with a cosy clubhouse behind one goal and a stand that would not look out of place in non-league's top flight running along one side of the pitch. Scarborough Athletic do their best to make it feel like home when they roll into town but the overall feeling conveyed, to an outsider admittedly, is one of unease with their surroundings.
One of my favourite things about visiting non-league grounds is that sense of privilege to briefly borrow an experience that means a huge amount to a group of people. You can walk into clubhouses up and down the country, in towns and villages left largely to their own devices in the football world, and see a glimpse of the past.
It may be a pennant received from a more illustrious club following a pre-season friendly or a meeting in a cup competition. It may be a memento donated by a famous former player who went on to "better" things. Unfortunately, it is a privilege that is missing when visiting Scarborough Athletic's temporary home.
Bridlington Town went to Wembley twice in the not-so distant past for FA Vase finals, defeated in an Elland Road replay by Yeading in 1990 before triumphing under the Twin Towers against Tiverton Town three years later. Scarborough FC had been busy in a knockout competition a few months previously, losing a League Cup tie to Arsenal by a single Nigel Winterburn goal. 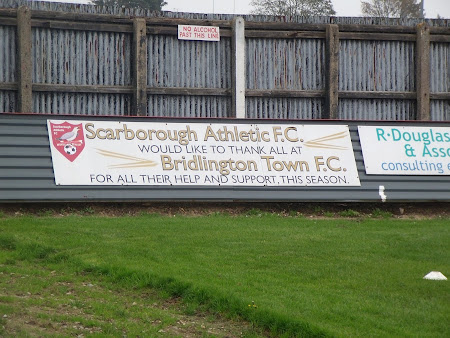 Bridlington preceded Scarborough in suffering the eventual fate of their more northerly neighbours, starting again lower down the non-league ladder as Bridlington Town AFC after folding. Despite this, the Vase exploits of their forerunners are, understandably, on proud display in the Queensgate clubhouse.
The visitors to Bridlington on Saturday were Thackley, an 80-year-old club from a village just outside Bradford. Both sides have aspirations of chasing down league ladders Farsley, making for an important occasion.
Scarborough Athletic lined up in a fairly standard 4-4-2 formation spearheaded by the two goalscorers in their midweek success over Bridlington, two-goal Ryan Blott and his strike partner Rob Northen. The visitors relied on their giant centre-forward Matt Mathers and a very solid looking back line to gain a physical foothold in the game, but also looked menacing on the break. Their primary threat was the extremely nippy attacker Harry Thompson, whose darting runs often took him past two or three defenders with ease.
The opening exchanges were representative of the game as a whole, the hosts enjoying plenty of possession and attempting to pass the ball at a high tempo. Thackley were happy to absorb this approach and hit the Seadogs on the break, roared on by their loyal travelling support of around ten. Joking aside, double figures is a decent number for this level considering the distance. 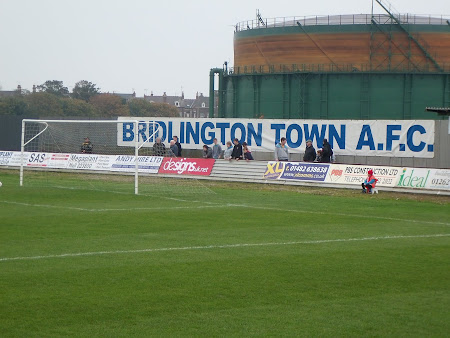 Thackley took the lead after 15 minutes when converted centre-half Mathers was presented with a clear sight of goal, beating Athletic goalkeeper Tom Woodhead from close range. Now, that was a fairly professional description that elaborates neatly on the note I made at the time - Nine lanky ginger goal. I knew I should have persevered with that shorthand guide.
As it turned out, I had time to write War and Peace about that goal, as very little happened in the remainder of the game. There was mild controversy when the home side were denied a penalty for handball shortly after conceding, but the main story of the game was the complete lack of cutting edge demonstrated by Athletic's hitherto prolific forward line.
Bill Law arrived as a half-time substitute and took his place alongside Blott up front with Northen pushed out to the left wing. Law initially looked lively but faded in the face of an uncompromising Thackley rearguard and even the obviously talented Blott was marshalled successfully.
The two goalkeepers deserve to be singled out for praise. Athletic goalkeeper Woodhead snuffed out at least four clear one-on-one attempts, bringing back memories of roaring foul-mouthed displeasure in the direction of Ade Akinbiyi. I wasn't the only one, but I was the only one in that particular pub on that particular night in the otherwise deathly quiet middle of that particular pub quiz. And we didn't win 1-0.
Thackley did. And their custodian Matty Convey was instrumental to their success, hoovering up everything that the hosts launched into the box. In truth, every set piece was too close to the commanding Convey and Athletic never looked likely to restore parity. 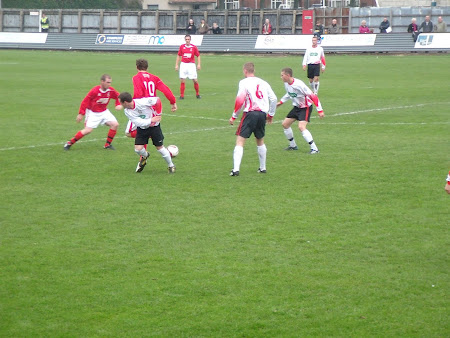 Which was all great for Thackley, but a bit of a shame for me as visiting Scarborough Athletic's temporary home was something I had been looking forward to greatly. I still enjoyed the experience, but seeing a near-500 crowd go wild at a late leveller would have increased that ten-fold.
Through all the bad blood, the frustrating current purgatory and 90-minute setbacks en route back up the division, the cause of unity for football in Scarborough feels like a positive one and truly a campaign of which all football fans should feel proud.
Along with many others, my hope is simple. That, in the near future, I can attend a Scarborough Athletic home game, without having to go to Bridlington for the privilege.
You can find out more about Scarborough Athletic and the campaign to restore the club to their home town here - BACK2BORO
Go mad and follow Scarborough Athletic, The72Football and European Football Weekends on Twitter.
Read more of David's work at The Seventy Two blog.
- Feel free to comment below -
Posted by Danny Last at 09:04

An excellent article, many thanks

That is a really emotional story. I hope it all ends well for their fans and team. Thanks for posting!

A very readable article and truthfull and honest comments and opinions.
Very well done and thank you.

Sad times and a sight no football fan wants to see:

Thanks to Stephen Deacon for sending the link above.