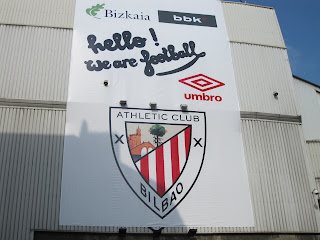 Hello! We Are Football
- Click on photos to enlarge image -
Perfect beaches, fabulous pintxos, all night fiestas and jade green hills - Welcome to Bilbao, the "different" part of Spain where Basque nationalism rules and grey not blue skies are the norm. It is the down-to-earth soul, rather than the many art galleries, that is the real attraction of the vital, exciting and cultured city of Bilbao. Oh, they're football potty as well. "Hello! We Are Football" as Athletic Bilbao say.
As you stroll around Bilbao, you'll notice the flags of Athletic Club all around the City. In 2009 the club reached the final of the Copa del Rey for the first time in 24 years. Flags hung from every nook and cranny and many still remain from that day. They lost that day to Barca but hey ho, it was an excuse for a party, and boy - do they love to party. There are references to the club everywhere you look, they even have their own multiple designs of sugar sachets - as you do.
Athletic were away when I visited the City. Don't panic. I saw two other games and managed to squeeze in a tour of San Mamés and a visit to Sestao River Club. As I pitched up to the stadium, my plea for free beer fell on death ears. My sound reasoning behind this being that the English (eg me) founded the club back in 1925. As such, a couple of lunchtime range-finders by way of a small thanks would have been nice. They just laughed.
There are many ways to travel to San Mamés - which is known locally as The Cathedral by the way, so impress your wife by telling her you fancy drinking in some culture when you drag her down there. You can take the metro (more of that later), the fancy new tram system - which links the stadium, the Guggenheim and the City - or you can just walk 20 minutes from the centre and take in a few bars en route.
If you do take the metro, as you emerge from station, you'll notice the four towering old skool floodlights. Your tummy does a little rumble, you skip a heartbeat and then you realise that they belong to the adjacent bus depot and the ground is behind you. Keep calm and carry on. 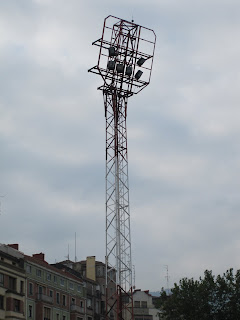 Relax Lasty. They belong to the coach station you lemon - Ed. 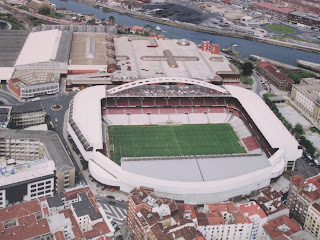 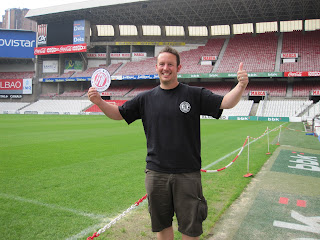 I didn't see you on the pitch Ed, you plum - Danny.
The stadium tour costs €6. Real Madrid charge €15 for theirs but then they sign Kaka, Ronaldo and anyone else who wins the Ballon d'Or - whilst Bilbao's policy is to only select players native to the greater Basque Country. This has become slightly more relaxed in recent times though and now they occasionally sign footballers with direct Basque ancestry, which has been both criticised and admired locally.
EFW got its own personal tour of the stadium, it's not what you know etc. As I strolled through the trophy room there was the usual mixture of trophies ranging from small to the size of a bus. One of them was the size of a large sailing boat. In fact it was a large sailing boat. They must have had some time on their hands in 1923. No photos allowed in the trophy room so you'll have to take my word for it.
The best story on the tour concerns the Gabarra (barge boat). Every time the club win something, out comes the barge boat and the team sail down the river that cuts through the city and the fans celebrate for weeks. Trouble is, it last got an airing in 1984 when they won the league and cup double. Nowadays, they're not even sure where it is. 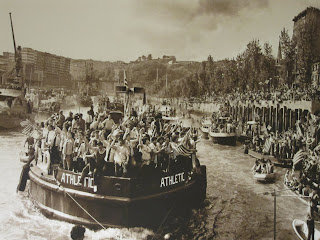 Argy Bargy. Things were black and white when the barge last got an airing. 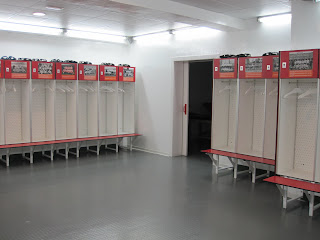 My wife always says "Why do you want to see where they get changed every time?". It's a good question but you just have to don't you? 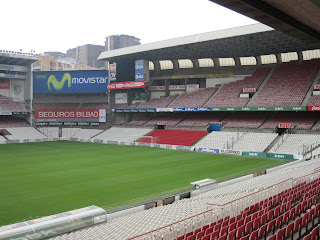 You can't beat a trip to the Cathedral when you're on holiday.
I was told that the fans are faithful, understanding, generous and know how to be patient when things don't go so well (ie nothing to add to the trophy cabinet since 1984) and that know - like no other - how to savour victories. This is my kind of team. They don't actually win anything much but when they do they go quite literally bonkers.
The ground itself is old and historic and the fans are close to the pitch. All this will change in four years time though as next door, a boring, characterless identikit stadium is being built. The San Mames Barria will be rated Five stars by FIFA but only a two by EFW.
Tickets for the museum as well as stadium tours can be purchased at gate (puerta) 26. Match tickets are brought at puerta 40 and will cost between €35-180 unless you are a socio (member) in which case they start from €15. The club shop was shut when I went which saved me about €100. If badges are your thing then there is shop called "Futbol Regalo" (Football Presents) in Calle Licenciado Poza opposite the stadium that has around 2000 for sale.

In the evenings, do as the locals do and bar hop. In the Casco Viejo, around Calles Barrenkale, Ronde and de Somera, there are umpty thrumpty bars. Don't just stay in one as soon as you find a seat. Have beer will travel. Try as many as you can and enjoy the mix of political, alternative, young and vibrant crowd. Mention football and you'll be there all night.

Try and find a bar called Pena Athletic de Casco Athletic in Calle Pelota on your night out. In there I met Carlos (of course Carlos) and Inigo the owner. Get on with Inigo and he'll give you the nod to enter the secret socios room through the back which is awash with Athletic memorabilia. It is a little gem and the beer isn't too bad either.
The metro has four football stadiums within 12 stops: Athletic Bilbao (San Mames), Portugalete (Portugalete), Sestao River Club (Sestao) and Barkaldo (Barkaldo). There are only two lines to negotiate as well. Best metro in the world anyone? It's also one of the best places you could wish to visit. Take your wife, go with the lads, go on your own - just make sure you go. 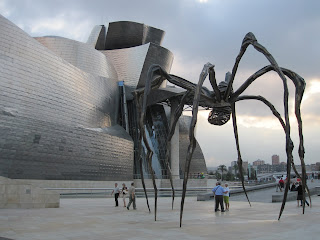 The Guggenheim in Bilbao is an absolute must. Five FIFA stars and it's not even about football. 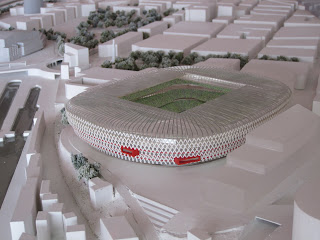 Talking of football (Phew!) - here's a model of the new ground being built next door. 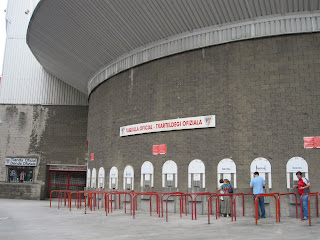 And you'll be wanting to see the ticket office. Here she is. Lovely eh? 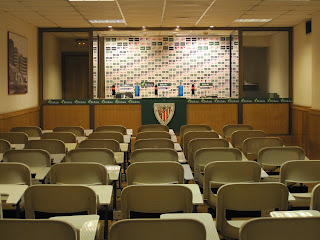 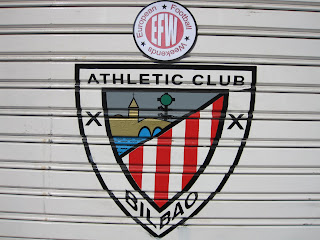 Adios or as they say in these parts Aio.
For match reports on the this trip click on Barakaldo and Portugalete.

The Budget Airlines Guide to Bilbao
- Feel free to comment below -
Posted by Danny Last at 09:07

Saw Bilbao v. Madrid a couple of years ago - easily in my top 5 in terms of atmosphere. Even though Bilbao lost 1-0 it was a superb trip. Great people as well - had a drink in the various Penas pre-match and were very warmly welcomed! Highly recommended.

Good stuff Seb. I don't think I've ever heard a bad word said about their fans or the city of Bilbao. Everyone who goes there seems to enjoy it. With quality food, beer and friendly locals it certainly ticks most of my boxes.

the basque area is beautiful and the people are lovely.went to see real sociedad play once.real sociedad are the big rivals for bilbao.However both clubs fans hate madrid more than they hate each other.
Real sociedad also had a ban on non basques playing for them.
However the first non basque player they signed was the irishman (form liverpool) john aldrige.
Aldrige scored a huge amount of goals (most importantly a load against rela madrid) and is still regarded as a hero.
My mate and I told the fnas we were his cousins over to watch the match.Got free drink for most of the night because of it