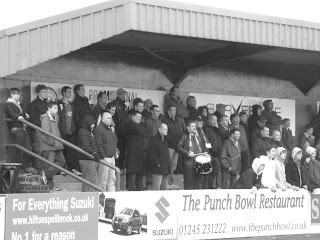 - Click on photos to enlarge image -
Bishop's Stortford, huh, yeah, what is it good for? Absolutely loads of things, say it again, y'all. Where to start? Yes, yes, market town next Stansted Airport. Of course, home to a young rebellious Russell Brand in his boarding school days (he got expelled obviously) and I'll even give you Radio 1's Greg James who is a resident.

EFW readers will at this point be thrusting their arms into the air, saying “sir! sir! sir!” in their eagerness to point out that despite Brand, James and planes; the real reason Bishop's Stortford are on the tip of most people's tongues these days is the fans of their football team The Bishops or if you will The Blues.

Blues fans are known to be very loud and are also well known throughout the league for their witty chanting and their chants have appeared on a number of occasions on the BBC Sports's 'Chants of the Season' section. I guess you'll be wanting an award winning example now won't you? Here we go then; to the tune of Toni Basil's Hey Mickey - they once sung to St Albans goalkeeper Nick Eyre: "Hey Nicky you're so fine, you're so fine, you're two behind, hey Nicky!" Worthy of a two hour train trip to Woodside Park to see Lewes take them on then? Yes siree, not arf.

The EFW Team suffered a minor setback upon our arrival to CM23 just under 4 hours before kick off. The pub we'd pencilled in for our pre-match beer and darts (Jolly Brewers) wasn't open. What to do in a moment of crisis? Join the Bishop's Stortford Working Mens Club next door? Of course. We can be quite resourceful at times. So we grabbed a local to sign us in and flashed our union cards for further proof of our working class roots and Bob was indeed our Uncle. In you come lads. £2.20 a pint ok for you? I'll switch the light on for the dart board shall I?.

Absolutely everybody in the pub was up for a chat. They were all over talking about football, football, football, Cheltenham Festival, football and a bit of football. A plaque on the wall proudly boasted the fully deserved title of Britain's loudest and hottest pub. An award they'd picked up for four years running. After 21 legs of darts, a few rounds and a wave to all and sundry we were on our merry way.

We made it as far as the Rose and Crown opposite the station. A traditional local that has been spoilt by an unnecessary refurbishment (ie dart board removed, swanky sofas inserted and wooden floorboards installed). A very swift pint later and we taxied our way into the Eddie Bentley Lounge at Woodside Park, home to Bishop's Stortford FC or Bishop's Stortfort FC as the welcoming mat would have it be known.

Our friends at The Ball is Round Blog had sponsored the match and as such we had a little bit of fun in the boardroom beforehand. Stuart, the head poncho of TBIR had arranged for his two daughters to be matchday mascots for the afternoon - Dad of the Year Gong in the post as we speak. Heavenly biscuits were on offer which compensated for the lack of beer. Non-League football and biscuits go hand in hand. Check out the Rothmans Guide to Non-League Biscuits Volume 12 if you can grab hold of a copy. Priceless. 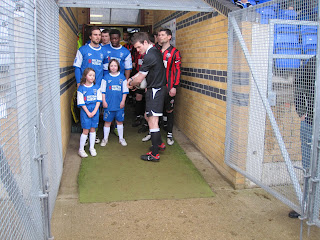 TBIR mascots Lolly and Islabella Fuller get ready to rumble. 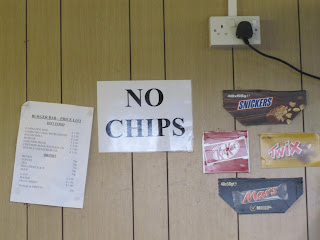 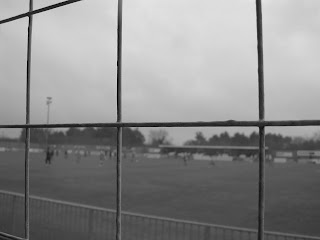 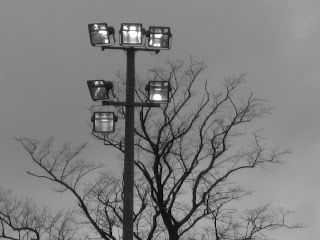 And relax..
What of the match then Lasty!? I can sum that up in one letter - ZZZZzzzz......Good Lord it was dull. Two teams hopelessly out of form served up a chess match that Garry Kasparov and Nigel Short would have been proud of. I suppose for two teams sporting the nicknames "The Bishops" and "The Rooks" it was about par for the course. Checkmate?

Lewes dominated proceedings after The Blues were reduced to 10 men midway through the second half but it was an all too familiar story of bags of possession and no end product. We're keeping the faith though here at EFW HQ. I for one won't mention the fact that we got rid of my sponsored player Sam Crabb - who knew where the goal was - the same Sam Crabb who is a heartbeat away from Wembley by virtue of shooting Whitehawk to FA Vase glory. Not my style mate. See you on Sunday for the semi-final Crabby - he said bleating on about Sam Crabb.

Afterwards, we were entertained in the shoe box of a boardroom. It was like being stuck on the Circle Line during rush hour. Even an eagle-eyed action man would have struggled to pick out the scores rolling in on the tiny portable telly. Even a Japanese sniper would have struggled to decipher Rochadale's 4-2 victory over The Accies on the vidiprinter. Ning, ning, ning, moan moan moan etc....

It wasn't all bad though. Firstly, the guy who spins the wheels of steel over the PA system at the Woodside pumped out an ironic version of "Heaven Knows I'm Miserable Now" by The Smiths at the final whistle. Secondly, the EFW Team had rang ahead and donated 15GBP to Sports Relief for the over exposed James Corden NOT to appear during the ninety plus minutes. Everyone is a winner. Cheers! 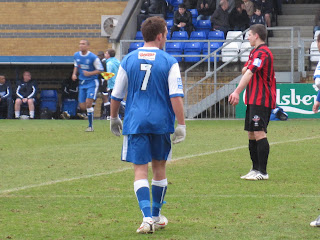 Man alive Mr Sackey! Have you not read our Odense BK report!? Click HERE to do so. 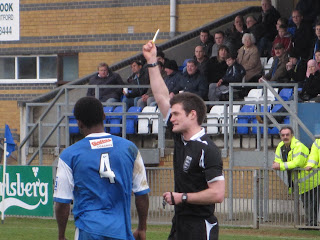 Have you ever seen a ref so happy to book a player? He sent him off later on. 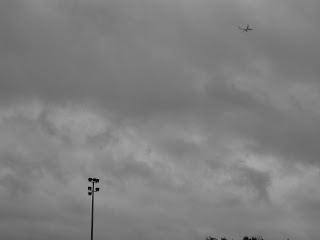 As we were next to Stansted Airport, I had an award winning photo of a floodlight and a plane in mind. 1 FIFA star for this effort? Low cloud cover is my only - very lame - excuse. 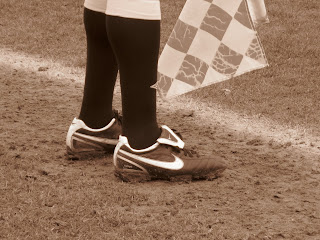 The lino about to swing a fast boot. 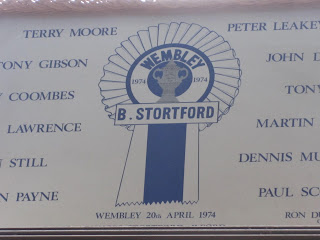 And IF you KNOW your history... 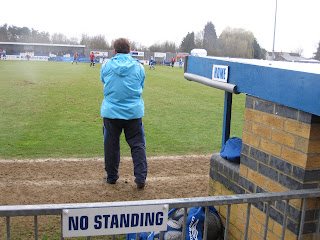 Letter of complaint to FIFA in the post as I type. 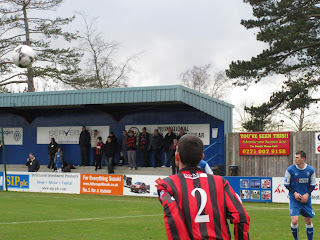 Game on, Barney to throw first. LLF in the background soaking up every minute. 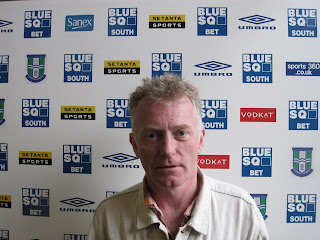 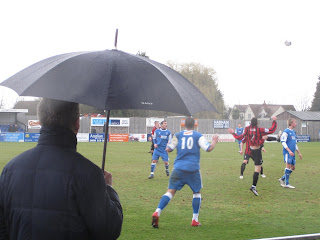 And finally (phew - Ed) joking aside, it was a brolly good show. Keep the faith and see you next week.

For the Ball is Round version - which is well worth the read - head here:

And...wait for it....for video highlights (highlights!) of the match click, get a load of this:

Great read again Danny. I wasn't at the game and by the sounds of it I didn't miss a awful lot in quality of football. But hopefully the next couple of games the Rooks will pick it up and get to safety. Although it isn't looking great.

Glad to see the LLF still going away, despite our terrible record on the road. Any tifos/displays to report on from yesterdays action ;)