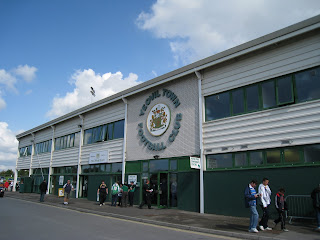 Before next weeks trip to whereby I shall be sampling the (Turkish) delights of Beşiktaş and Fenerbahçe, I decided to take in a trip to to watch the blue and white wizards take on the Glovers.

I travelled down in a car which included life long fan Mr Cherry and ex-Middlesbrough fan Cynical Dave. Cynical has frankly lost the will to live when it comes to top flight football, indeed he only came along for the drive and had no intention of watching the actual match.

En route, a quick flick around the radio dial inevitably ended up with us tuned into Radio Five Live. They had commentary on the v Manchester United lunchtime snore fest. I myself have no interest whatsoever in this fixture or indeed anything that occurs in the Premiership.

There was one saving grace though. The expert analysis was provided by ex-England manager Graham Taylor. You can brighten up any mundane game he is involved in by playing Graham Taylor bingo. Write down the phrases ‘No doubt about it’, ‘Of that I have no doubt’ ‘No doubt about it in my mind’, ‘I have to say..’ and ‘On this occasion’ and every time he says them - roughly every time he opens his mouth - award yourself with raucous cheers, gold stars and a punch to the air with delight.

A trip to Yeovil from isn’t the quickest journey you’ll ever encounter but it’s likely to be up there in your top 5 scenic drives of the season. You chalk up a staggering amount of quintessential English villages and small towns en route; it really is ’s green and pleasant land. Thatched cottages, ponds, closed Post Offices and village cricket. At one stage, due to a diversion we found ourselves driving down ‘’ – I rest my case.

Upon arrival in Yeovil we dropped of Mr Mckay in the town centre. Our discussions on the way down about the death of football had only increased his desire not to attend the match. He would spend the afternoon merrily skipping from one public house to the next before rejoining us post match.

Mr Cherry and I headed to the beer tent behind the main stand at . As the ground is smack bang in the middle of nowhere this is the only realistic option for a pre-match pint. Strictly speaking it’s only meant to be for home fans but providing you’re not totally stupid you will gain entry without any problems.

After a couple of pints it’s quite hard not to slip into a West Country accent. There is a big sign bearing the legend ‘Welcome to – home of The Glovers’ as you walk in. Try saying ‘The Glovers’ without descending into Cornish drawl. You see, it’s impossible.

The ground itself isn’t the most inspiring. Two similar all-seater stands line the length of the pitch. A covered terrace (happily sponsored by a cider company) is home to the vocal element of the home fans and an uncovered terrace opposite houses the travelling hordes.I have to say on this occasion Brighton had around 600 away fans, I’ve no doubt about that in my mind. 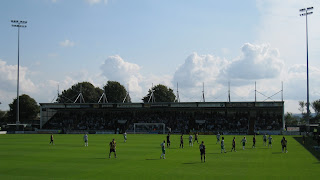 Yeovil was the first ground I’d been to where they had placed flowers in the toilets. Who could possible misbehave in a toilet block that had flowers strategically placed around them!? Answer, nobody of course, five FIFA stars awarded to . The other pleasing aspect was the advertising boards around the ground. My particular favourite was a sign for ‘Blackacre Farm Eggs’ – you wouldn’t get that at Old Trafford would you!? 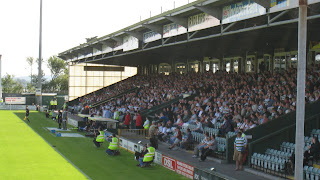 It was a good job the sun was beating down because nothing much happened in the actual match up until the 59th minute. A couple of minutes before then Brighton debutant Joe Anyinsah had been booked for having the cheek to go up for a header with Glovers defender Nathan Jones. In the aforementioned 59th minute, Anyinsah tapped Jones on the back and he went down pathetically clutching his face. You would have hoped for better from someone who used to pull on an Albion shirt himself. Out popped a red card and the mood of the match changed in an instant. 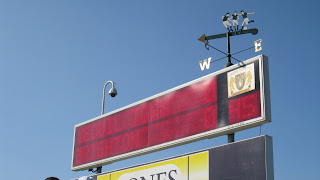 Tackles and insults were then traded until the 77th minute when Adam Virgo was mauled down inside the box. Nicky Forster sent the keeper the wrong way and the looked as though they were heading for their sixth away win on the bounce. Just three minutes later Yeovil were level. swung his right boot from twenty yards out sending the ball into the bottom right hand corner of the net via a couple of deflections. Full time score Yeovil Town 1-1 Brighton and Hove Albion. A good point well made. 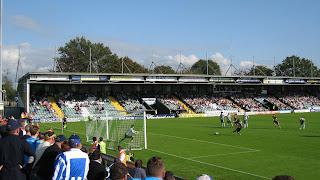 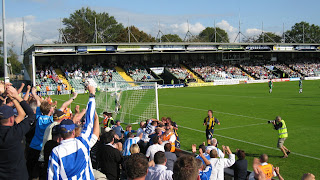 We picked up Cynical outside the ground. He’d been to three pubs, won £100 in the bookies and only had a single complaint which was the fact he’d had to endure Setanta Sports coverage of the football all afternoon.

To avoid the monotony, we opted to drive back a slightly different route. This paid of handsomely when unexpectedly we found ourselves driving past Cuthbury, home to Wimborne Town FC. They’d just played Tiverton in the FA Cup so we thought it rude not to pop in momentarily and have a quick poke around.

To our delight we discovered the pitch at the Cuthbury ground slopped considerably from one side to the other. In the old days you’d always be guaranteed a slopping pitch on a visit to Yeovil. Sadly they didn’t incorporate that within their new stadium design so it was left to The Magpies of WTFC to get our slopping pitch fix for the day. 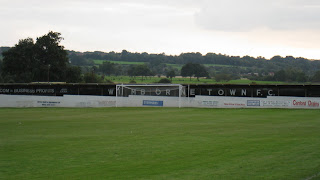 We arrived back in Brighton at the civilised hour of 20:30 which allowed us to engage in a pub crawl of some of ’s finest pubs for four hours. A delightful way to round off what had been a most enjoyable day.