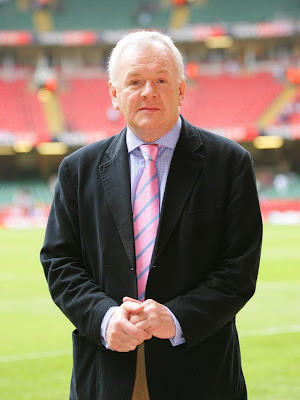 Pat Wins Prizes
Patrick Collins has been the chief sports writer of the Mail on Sunday since the newspaper’s launch in 1982, writes Adam Bate. He has won the prestigious SJA Sports Writer of the Year award five times across three different decades.

Thanks for talking to EFW. As we speak, the Premier League has just got up and running again. Are you looking forward to the new season? Yeah it’s always good value isn’t it. I kind of think it comes one month too soon though and can then linger a little too long. I love track and field, for example, but it has been squeezed out. Starting the football season before we’ve played the third Test match doesn’t feel right but football doesn’t give a toss. I’m opposed to the idea of the Premier League. It was conceived in greed and I much prefer the old system where money was distributed more evenly. It was a co-operative. You could get a team like Nottingham Forest or Derby County winning the title. Now there are only four to six who can possibly be competitive.

So it’s fair to say you’re not happy with the direction in which the game is going. There are sheikhs and oligarchs on the one hand, bankruptcy and administration on the other. Should we be worried? Yes. Some of the people should not have passed the fit and proper persons test. Thaksin Shinawatra turned up with Amnesty International and other human rights organisations telling us how bad he was and it was just ignored. It was disgraceful. The old directors weren’t great but now it’s shameless. And what’s made the disparity worse are the parachute payments which I think are now £16m a year for three years? The intention is to create a closed shop. Now when people dream about their club they dream of an Abramovich or a passing sheikh. The game is better than that.

But there are still lots of things to enjoy in the game. We have Lionel Messi, right? Indeed. I don’t think the game has ever been played so well. I’ve never come away from a game feeling quite like I did after the 2011 European Cup Final. It cannot get better than that. The speed and the audacity – I’ve never seen anything like it.

High praise from a Charlton Athletic fan! It’s been a good start to the season. Do you have high hopes under Chris Powell? He’s a great choice. I hope they can find some money to support him as he’s a nice bloke. Charlton defied the odds under Alan Curbishley and what has happened since shows how it can go wrong. People were saying he had taken us as far as he could when the club was seventh or eighth in the league! A few bad decisions and it was gone – a club that had been seen as so well run too.

Do you still get the chance to go and watch Charlton much? I go as often as I can and certainly to the big games. If I didn’t have to report I’d go most weeks.

Aside from the Valley, what’s your favourite ground in England? After all these years, it’s still a thrill going to Old Trafford. The Emirates is an extraordinary stadium and Anfield is Anfield. But strangely the ground I have come to appreciate is Portsmouth’s. I have no obvious affiliation with the club but I always look forward to going. Fratton Park is very old fashioned and looks like it’s about to fall down but I love it.

How about away trips in Europe? I loved Turin, especially when it was the old Stadio Comunale. I went to the opening of the Stade de France which is a marvellous stadium. You can’t beat the two big Spanish grounds and Celtic Park on a European night is an amazing experience. One slightly different memory that stays with me is watching England play in Bulgaria back in the 1970s. The press table in Sofia was set up about three yards in from the touchline with a little parasol. I remember Trevor Brooking and others crashing into this table. You could hear every tackle – it was a unique experience.

Away from football you’ve been a big supporter of the 2012 Olympics in London. That must be something you’re hugely looking forward to? What can I say? I believe it’s the biggest and best thing that’s happened to sport in this country. Even this week there were a few mocking stories in the news but people turned out in huge numbers to see Mark Cavendish at the road race test event in Surrey.  There is a passion for it. This will be my tenth summer Olympics and nobody has approached it with this enthusiasm.

So does some of the cynicism about London 2012 frustrate you? It does! I genuinely think we went into it with the best motives. I know [Lord Sebastian] Coe and it’s the job he was born to do. I remember going up a primitive viewing hatch with him overlooking the site and wondering how he could possibly get this done. It was just wasteland. It was poison. It’s closer to the centre than any Olympics I can remember and it has been completely regenerated. There are good people involved in the construction too. I don’t think it was commercially or politically motivated and the public response has been great. But then, Britain always does events well. I remember the Tour de France prologue a few years back and the crowds were bigger than in France. When athletes do amazing things people get behind them.

And beyond that, do you think you’ll be going out to Brazil to cover the 2014 World Cup and the 2016 Rio Olympics? Oh that’s too far ahead to say! Let’s just say it’s probably not the location the England football team would have chosen.

Are you worried for the future of newspaper journalism then – what do you think the future holds? Of course it’s worrying. However, those in the print medium were strangely heartened by what happened following the demise of the News of the World. Some thought people just wouldn’t buy another paper but the overall market didn’t noticeably shrink. There’s still a newspaper-buying public out there and we sell an unbelievable amount. I think my own paper is selling two and a quarter million so I’m not one of the absolute doom and gloom brigade.

How has your job changed over the years? Do you feel under more pressure for online hits and selling papers or was it always like that? Not so much that aspect of it but it is a very different environment from, say, 15 years ago. For a Sunday paper you could get an idea on the Tuesday or Wednesday and know it would be ok for the weekend. Now everyone is so thorough that the idea wouldn’t keep, so it’s ten times harder to write a Sunday column. The emphasis now is on breaking news. You see the banner on the TV channels. It clearly isn’t breaking news but that’s how everyone expects it to be delivered these days.

Twitter is a part of that. I noticed you referred to Joey Barton’s tweets in your column last week. Do you think you’ll ever have a Twitter account? Absolutely not! This job takes all of my time as it is and most of the grounds are not terribly helpful with Wi-Fi. I genuinely don’t know anything about it and I don’t want to know. I realise that makes me a Luddite but when I see Joey Barton and Robbie Savage are on there I cannot imagine it’s terribly appealing. I know Paul [Hayward] does it now doesn’t he? Paddy Barclay had a book out recently and I went to the launch. I was sitting next to Henry Winter and every so often the phone would come out and he’d be sending these tweets. I must have been incredibly boring.

In the meantime, you’ve still got one of the best jobs in the world haven’t you? Easily. Golly, I never ever doubt that. I get a terrific kick out of it still. Even this week I was at Edgbaston watching England win the series against India. It’s wonderful seeing an event like that.

Agreed. Thanks for talking to EFW, Patrick. Pleasure.


Adam Bate is the Editor of GhostGoal. A Wolves fan based in Birmingham, Adam is a freelance sports journalist and writes for FourFourTwo, When Saturday Comes, Calcio Italia, In Bed With Maradona and BT Life's a Pitch.
Follow GhostGoal and European Football Football Weekends on Twitter. Not you though Patrick, obviously.
Posted by Danny Last at 23:24