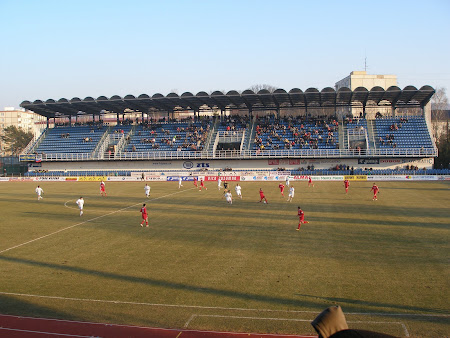 First of all, it would be fraudulent to claim that this trip constitutes a true 'European Football Weekend'. I live in Žilina and Dubnica is a simple journey of just over an hour on the main railway line which links Slovakia's capital Bratislava with second city Košice. But, after the three-month winter break the domestic game takes here, it at least felt like a proper football day out. Also, while I've been to Dubnica before to watch Žilina, this was my first visit as a neutral fan.

The Slovak language has a word 'sympatický', which, although not exactly a false friend of the English 'sympathetic', is not an exact translation of it either. Its most common meaning is 'likeable' but it is often used by sports journalists here to give a sense of a game underdog trying his or her best, and 'in the right way', to overcome imposing odds. It is often used, and for a variety of reasons, to refer to MFK Dubnica.

For a start, Dubnica are a small-town club. I was a little surprised to find that the population of the town, Dubnica nad Váhom to give it its full name, is 25,000 because, when you get off the train there, you feel like you're in a village. And the towns ten minutes or so away in either direction - to the north, Ilava, with its vast prison, and Trencín and its spectacular castle to the south - are almost certainly far better-known within Slovakia as a whole. Dubnica's football club, meanwhile, is a Slovak version of Crewe Alexandra. It is known for its academy, which, considering its lightly-populated catchment area, produces a remarkable number of talented young players season after season. It is partly the transfer fees earned from the sales of the best of these lads which keep the club going.

Dubnica never have a first team good enough or, more to the point, strong or experienced enough, to challenge at the very top of Slovakia's Corgon Liga but, after spending the 1990s yo-yoing between the top two divisions, they are currently in their tenth successive year among the elite. Their most successful season of recent times was 2004/2005 when they finished fourth and qualified for the Intertoto Cup. None other than Newcastle United, at the start of Alan Shearer's farewell season, knocked them out of that. You don't have to look too hard in the bar adjacent to the Dubnica ground to find pictures taken at the St James's Park leg of that tie.

Saturday's clash with Koice, by contrast, was a relegation battle. Dubnica went into the winter break at the bottom of the Corgon Liga with some of their autumn defeats, notably successive 4-0 hammerings at Trnava and at home to Zlaté Moravce, suggesting that some of their current youngsters are not quite up to top-level football yet. As such, extra funds were released during the break to bring in a few more experienced campaigners, including goalkeeper Pavol Kovác, who has played in Greece's top division, and Czechs Tomáš Polách and Jan Trousil. Košice, just two places and two points better off than their hosts, have problems of their own. They are not as 'sympatický' as Dubnica, however, not least because they are effectively a franchise club. The Koice who entered the Champions League group stages in the 1997/1998 season went bankrupt six years later but new owners purchased the licence of Licartovce, an up-an-coming second tier club, and transformed them into MFK Košice. They gained promotion in 2004/2005 and have been in the Corgon Liga ever since. Like Dubnica, though, they haven't seriously figured at the top end. 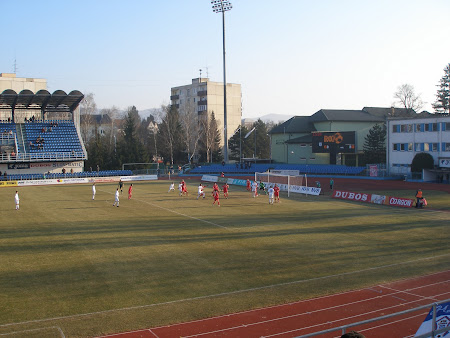 However, for me, the best reason of all to apply the word 'sympatický' to Dubnica is not directly related to pure footballing matters. It is that a trip to watch a game there is such a delightfully simple, laid-back experience. If you want to see a Slovak game with atmosphere, by which I mean colour and noise, then go, as EFW have already done, to Trnava. You'll get choreography, non-stop chanting, probably fireworks and a tangible 'edge'. Trnava fans are fiercely partisan, as much in defence of their reputation as the most passionate in the country as in support of their team. At Dubnica, you get off the train 30 minutes before the game, stroll the 200 metres to the ground, momentarily wonder if there is a game on at all because there is nobody in the surrounding streets, have a drink, pass the time of day with the amiable stewards and take your seat. The rest of the crowd - and the 1,750 attendance for Saturday's game is quite high for Dubnica - materialise as if from nowhere, like the shopkeeper in Mr Benn, as the players take the field. I can only assume that all the home fans here live in the residential streets near the stadium and know to the second how long it takes to get from their houses to the ground.

Back to the game, which Dubnica would have had all wrapped up inside the first twenty minutes if it hadn't been for a simply miraculous performance from Košice's Macedonian goalkeeper Darko Tosilovski. He made an amazing double save and then bettered it with a triple save. After one acrobatic effort, I happened to glance at Kovác, looking lonely on the edge of his penalty area, and, like most of the Dubnica fans, he was shaking his head in a mixture of disbelief and admiration. Inevitably, Dubnica couldn't quite keep up that opening barrage but at no point in the game did Košice get on top. When the referee blew his final whistle on a 0-0 draw, it was impossible not to feel a sense of injustice on the home team's behalf.

Finally, it's rather shaming to write an article for EFW describing a football trip during which you didn't drink any beer but there are a couple of mitigating factors. First of all, it was a seriously cold day and Slovak beer, good as it is, just goes through you in those conditions. Second, and far more important, Dubnica is such a wonderful place that you can buy pretty much any alcoholic drink you like inside the ground. Winter warmers such as mulled wine, tea with rum or tea with slivovica are available. Or you can have rum, slivovica or brandy in their neat forms. You buy your shot from a wooden hut for 50 cents and return to your seat in a happy glow, ready to enjoy more of the home team's easy-on-the-eye football. I'll be honest here ; living where I do, I'm supposed to support Žilina but I really do love Dubnica. They're a lot more than just 'sympatický' and I fervently hope they stay up.

Very well written. As if I was sitting there. And slivovica is pure liquid gold. :)

James just demonstrates that there is always something in a Slovak football fixture; even a 0-0 between relegation candidates!

My only question is, who will James be supporting when Zilina host Dubnica next week at Stadion Pod Dubnom?!

Well, considering that Zilina are champions, top of the league and have been in the Champions League, while Dubnica struggle at the bottom, it's a bit like being married to the local glamour model while holding a flame for an unassumingly cute girl from a neighbouring town. Guess that's not really an answer...

just the one more question James .. away fans .. were there any?

Looking closely at one of your pics, I see there could possibly have been [a handful] of away fans, but could you confirm?

What's happened to Kosice's fairly fervent support? They took a fair crowd to Roma a couple of seasons ago, but this season they seem very conspicuous by their absence ..