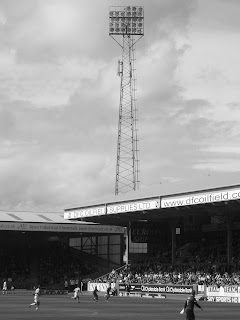 Stand Free Wherever You May Be
Aberdeen 1-3 Celtic (15:08:09)
- click on photos to enlarge image -
There are two main industries in Aberdeen; oil and lap dancing. Basically, one half of Aberdeen take oil out of the ground and the other half rub it all over their bodies -boom boom, tish. Welcome to the Granite City where Cynical Dave and I would pitch up for three days of football and beer. In true EFW fashion - what's not to like?

We had a wee dilemma for this opening SPL match of the season. Aberdeen FC had kindly presented European Football Weekends with a couple of press passes. However, prior to them doing so we'd also purchased two tickets in the Richard Donald Stand next to the Celtic fans. So, did we want to hob knob with the press pack or soak up the atmosphere?

For the sake of television, the match kicked of at 12:45. We arrived early doors and initially went into the press box to have a nosey round. After a word with Murdo MacLeod we decided to wave a white flag and resort to plan B - the pub. I saw a photo in the Scotland on Sunday the next day of funnyman Billy Connolly, who was sat right near the seats we'd have been in. I was also duly told however that he'd have ignored us anyway! 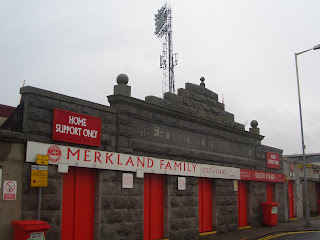 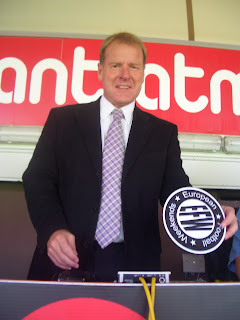 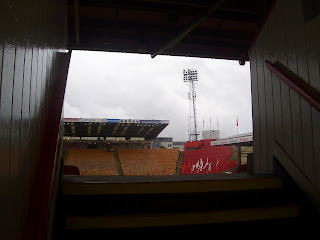 First view inside Pittodrie and the Red Ultras dispay taking shape in the Y Block.

Right next to Pittodrie is a number of golf courses that run along side the North Sea. More importantly though, said golf courses have social clubs whereby one can partake in what I like to call 'lovely beer'. We opted for the Caledonian Golf Club. Strictly speaking this is a 'members only' bar but luckily I knew the magic formula for gaining access; 1 x nod coupled with 2 x winks.

Fully refreshed we made our way into the Richard Donald Stand to soak it all up. After penning an article on the Aberdeen Red Ultras I was keen to see how they'd fare in the stands against their rivals from the Green Brigade Celtic. The Red Ultras shaded the display stakes with a fine effort in their fairly new location in the Y Block of the ground. The Green Brigade responded by unfurling a large banner surrounded by a number of green and white flags. 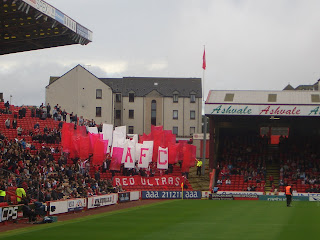 A fine effort from the Red Ultras. 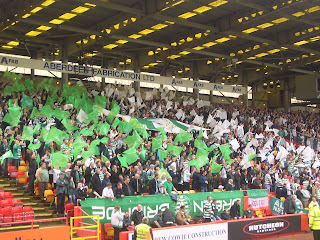 The Green Brigade respond with their own little number.
Celtic fans did however win the vocal battle. I've seen Celtic a number of times at Parkhead and given their reputation, the atmosphere has always disappointed me. So it was good to see them out in force here and singing for 90 minutes. They went through their full repertoire of songs at full volume including a homage to Artur Boruc just after half time that seemed to go on for ten minutes or more. So 1-1 off the park as far as I'm concerned.

On the park and especially in the first half Celtic ran riot. Aiden McGeady and moreover Shaun Maloney tore into the Dons from the start. If Scott McDonald had been on his game as well, Celtic may have had a hatful in the first 45 minutes alone. As it was they declared at 3-0 up with goals from McGeady (x 2) and McDonald.

It says a lot to me about Scottish football when a famous old team like Aberdeen have to sell their captain and playermaker of last season Scott Severin to - with all due disrespect - Watford FC. Add to this the fact that Mark McGhee simply has no money whatsoever to play with and what are you left with? Well, signings from Swindon Town is the answer in the form of Jerel Ifil. Not too bad but he's not going to bring the glory days back is he? 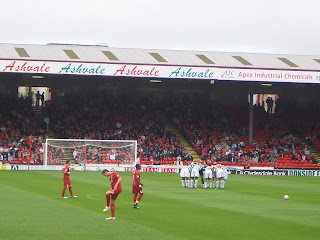 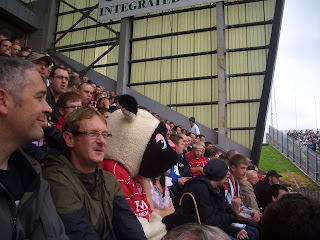 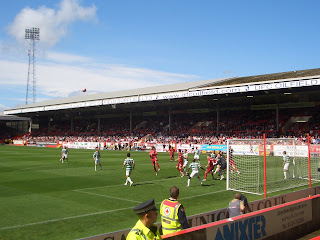 Aberdeen attack (must have been the 2nd half - Ed). 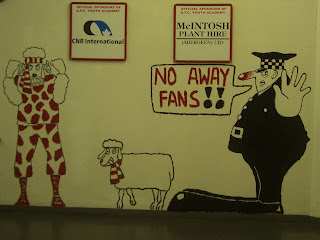 On the walls of the Richard Donald Stand. 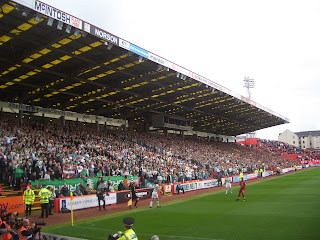 So not much skill for the home fans to get excited about but what really got on their goat was the lack of passion and effort. Aberdeen seemed to be a soft touch and that simply won't do. I don't like picking on individuals (yes you do - Ed.) but Lee Miller appeared out of breath and unfit. Shocking. I later discovered that he is possibly on the verge of a move to Middlesborough which possibly may explain that. Inexcusable in my book though.

So after 45 minutes the fans around me had run dry of expletives and Mark McGhee took his weary troops into the dressing room complete with 1 x face like thunder. He must have said something of note because Aberdeen looked much better in the second half. They scored the best goal of the game when midfielder Sone Aluko fired in a volley and could have gone onto score again - to set up a lively finish - but goosed up a couple of chances shortly after their goal and that was that.

Thanks to Rainbow taxis, twenty minutes after the final whistle the EFW team were stood on the terraces of Allan Park for the Cove Rangers v Brora Rangers game in the Highland League.

Aside from that it was pubs o'clock for us. The best ones (that I can remember) were:

The Pittodrie Bar - rammed with Aberdeen FC memorabilia complete with a section dedicated to the Tartan Army invasion of Wembley, breaking crossbars etc. 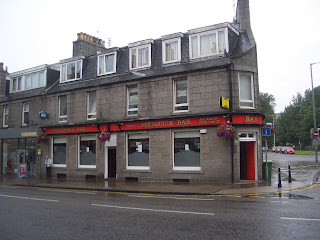 The Pittodrie Bar
The Scotia - decked head to toe in Scottish scarves and flags and (I think) the Tartan Army HQ in the North East of Scotland. 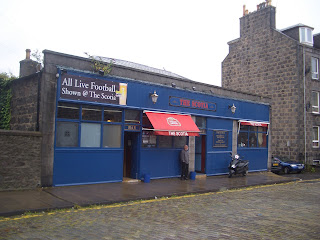 We'll be coming down the road. The Scotia Bar, Sommerfield Terrace.
Peep Peeps - look behind the hype (it was featured on Britain's Roughest Pubs) and the masking tape holding the tables together, this is a great boozer. We received the warmest of welcomes in here, class in a glass. 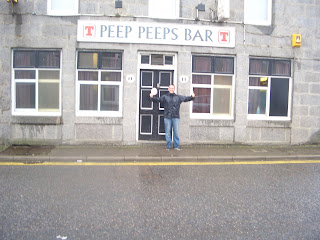 The Broadsword - we nicknamed this place The Jockey after the pub in Shameless, full of 'characters' but give me that over a Harvester any day of the week.

Butchers Arms - full of pennants from every Scottish team you can imagine, a great place to watch live 'fitba' and if you time it right as we did FREE PIES!

The Kirkgate Bar - another of my favourites with several references around the bar to Gothenburg '83 and happier times for Aberdeen when they beat Real Madrid to win the European Cup Winners Cup. Hopefully those days will return but I can't see it for the foreseeable future can you!? Cheers! 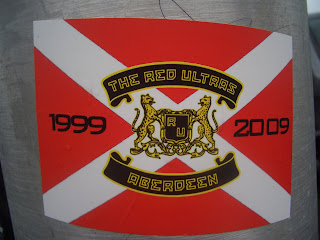 Our mates from the Red Ultras 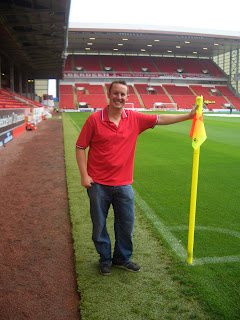 What a shame your first visit should be for this particular game. A 12.45pm kick off, coupled with TV coverage and a poor team does not make for a great atmosphere.

However on European nights, meaningful games against Rangers etc, the old ground is still electric.

Our away support is pretty special though, both in numbers and vocally as I believe you saw when we played Falkirk in the Scottish cup. 1,000 Reds will always outsing the 50-60,000 home supports in Glasgow. One of the curiosities of Scottish football is that the away fans always seem to make more noise than the home support?

It's not just Scottish football in that away fans outsing the home fans. I'd say it occurs in 90% of English matches as well.

It's only when you travel on *ahem* European Football Weekends that you see a whole stadium singing - not just for local derbies, big matches etc but for run of the mill matches as well.

As you say, I saw Aberdeen away at Falkirk and the fans that day were magnificent. My plan is to return to Scotland for a Dundee Utd v Aberdeen match. I was told this would be a 'goodie' to go to with up to 4-5,000 Dons fans making the short(ish) trip south.

Thanks for another great report. It makes me want to go to Scotland again ASAP, however, I have other regions lined up for the moment...

And, wow, it all comes with what must be the most comprehensive bar guide on Aberdeen. That's some deep-dive research.

I'm hoping to catch an Aberdeen game in 2010-2011 with my six year old oxford united supporting son. We'll no doubt visit the wifes family and get up to Aberdeen in october, hope they have a game at home and The lad can be a red for the day!

Nice post U should pay attantion to Biram Kial- the israeli player from Celtic
www.football-bear.com

Scotland looks like a really nice to place to visit