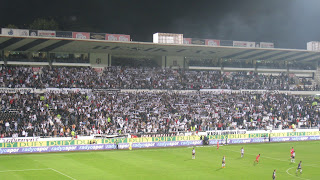 After the previous nights VIP treatment at Fenerbahçe and in the interests of keeping things real, the next evening we travelled by public transport and stood behind the goal with the hardcore home support for the Beşiktaş v Gaziantepspor encounter.

The match didn't kick off until 21:45 so beforehand we set out on a ten hour pre-match of sight seeing, eating and drinking. Istanbul is a food-lover's paradise and the best place we found to eat and drink were the plethora of Meyhane bars branching off the side streets from the main road between Taksim and Tunel. These establishments serve up Turkish tapas to die for and all washed down with some very agreeable local beer.

Beşiktaş İnönü Stadium really is located in an idyllic spot. Set on the European side of the Bosphorus, opposite the imposing Dolmabahce Palace, clock tower and mosque, it's the only stadium in the world from which you can view two continents (Europe and Asia). Pele once famously described it as the most beautiful in the world. It was renovated in 2004 and it's quite passable on the inside. However, it doesn't look as though anything has changed on the exterior since the year dot.

Initially, there wasn't too much noise in the stadium. Then the two teams trotted out, the Turkish national anthem was played - as it is before every league match in Turkey - and then all hell broke loose in the stands. It was a breathtaking show of support. They engaged in choreographed singing from stand to stand, side to side and top to bottom. It was almost impossible to keep your eyes on the match. I'm happy to declare the competition for Europe's best fans officially closed.

The Istanbullus football fans are the loud and raucous yin to the often quiet and impassive Premiership fans yang. Beşiktaş fans must afford themselves a chuckle when they hear the English media declaring Newcastle fans to be 'the best in the world' or that Fratton Park can be 'a bit intimidating'. Not even the Kop on 'another famous European night' can come close to Beşiktaş and this remember was just a run of the mill league match with only 50 or so away fans for competition.

Beşiktaş won the match at a canter. Gaziantepspor were crawling on the very bottom of the ocean of bad. They could have been awarded a penalty shortly after half time but the referee took one look around the ground and sensibly - fearing for his own personal safety - pulled out a red card and sent the opposition striker off for diving - a very wise move.

Despite the lack of away fans, roughly half the population of Turkey had turned out to steward and police the match both inside and outside the stadium. At one point, I nipped to the loo and returned, looked across the stand and thought 'I can't believe my wife is alone in the middle of that lot'. At no point did either of us feel threatened though, indeed she enjoyed the whole experience immensely.

I had been a trifle concerned with being met with a cordial response at these matches, what with being English and all. I needn't have worried, we were met with warmth and smiles all round. In fact 100% of the Turkish people we met during the week were friendly.

After the football we had four days to investigate Istanbul. We must have explored every nook and cranny, every mosque, palace, Grand Bazar, Spice Bazar and the weird and wonderfully bazar (sic).

Thank your lucky stars you don't have to drive there. The number one sound you'll hear is the chorus of car horns being sounded by frustrated drivers. The traffic situation in Sultanahmet appears to have been organised by the Trotters Independent Security. Thankfully the public transport system is excellent. You can also expect to see a serious amount of cats. There are at least two sitting on every street corner and the Istanbullus appear to cherish them.

If you like a beer then make sure your taste buds are up for sampling a drop of Efes Pilsen. Weighing in at 5% abv it's pretty much the only beer you'll be able to lay your hands on.

The Turks are a very proud nation. Everywhere you look, the Turkish flag flies proudly and prominently. Providing you don't insult them, respect their culture and keep your wits about you then it's as safe as houses. Welcome to hell!? Welcome to paradise more like.

On our last night in Istanbul, news filtered through of the Albion's win over Manchester City in the Carling Cup. I believe that beating the richest club in the world technically means Brighton are now the best team in the world. A strange old week then but what a cracker - cheers Turkey! 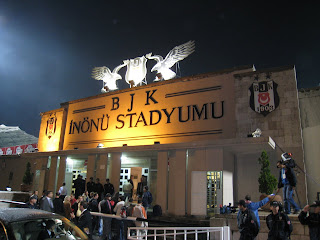 Outside the main stand. This is the nicest bit by a country mile. 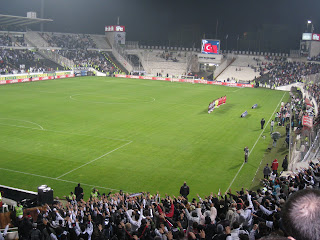 Ready for action. The fans warming up. Note pitiful away support to the left of the scoreboard. 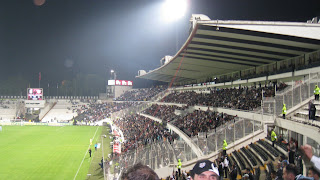 The main stand which incidentally costs an arm and a leg to get in. Even they were up and singing towards the end. 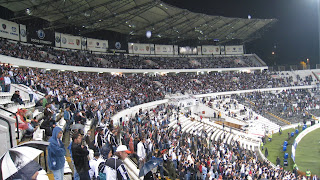 The Yeni Acik stand behind the goal which we were in the middle of. 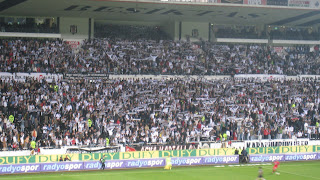 The Kapali stand is the best I've ever encountered for noise. The bit at the top in the middle has to be seen to be believed during the match. 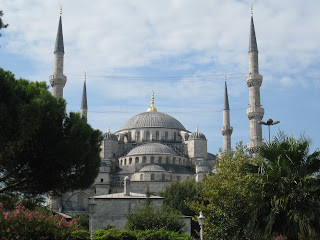 Blue Mosque, you saw me standing alone, without a dream in my heart.....good old Manchester City.
Posted by Danny Last at 12:34

Email ThisBlogThis!Share to TwitterShare to FacebookShare to Pinterest
Labels: Beskitas, Football in Turkey

Great report Danny, you can almost feel the noise!

I agree with el queso grande. I was over there with Spurs at Besiktas and our experience, even as part of the away support, mirrors yours Danny. An amazing place!

Thanks for the comment and the compliments about İstanbul, Danny.

I'm also a Besiktas JK supporter and am very proud of it! I want to add some things about our stadium for the your blog visitors and for people who wants to watch the best stadium show.. =)

Besiktas İnonu Stadium has 32,145 seat capacity. We have the craziest fans of the world called "ÇARŞI". The craziest because, we have the desibel record in a stadium with 132 db of voice! This means, you can easily hear the voice from Taksim!

You can visit this links to have further ideas what i'm talking about:

Thanks for the report again. Wish to lodge you here in İstanbul again..

I lived in Istanbul and miss it dearly. As you say, it's paradise on earth and with so many friendly people. If only working permits were so hard to obtain, I'd pack my bags in a second. And living in Barcelona, that says a lot, but nothing beats Istanbul.

I fully agree that Inönü is the nicest stadium on this planet. The views of the Bosphorus, the old Mosque and Dolmabahçe next door, ... are simply amazing. Almost too beautiful to be true. Add to that that Besiktas, along with Sultanahmet and Kadiköy, is the nicest area of Istanbul to spend time in: very vibrant with many relaxed waterside cafes to enjoy Turkish tea and the beautiful sights over the Bosphorus.

I miss Turkey... And I will say with 100% seriousness: EN BÜYÜK TÜRKIYE (= Turkey is the greatest). I hope I can move back some day, never to leave again. Inchallah...

I would like to thank you for the efforts you have put in writing this website. I'm hoping the same high-grade web site post from you in the future too. In fact your creative writing skills has inspired me to get my own web site going now. Actually blogging is spreading its wings and growing rapidly. Your write up is a good example.
fia