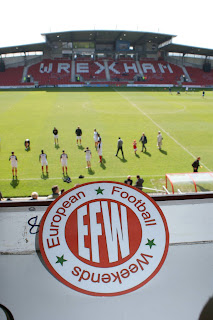 Wrexham FC
Obviously, we get to deal with a lot of football clubs here at European Football Weekends. Some of them leave lasting impressions on us, friendships are formed, cats end up kissing dogs and it all ends up happily ever after, just as we like it.

In this - part 1 of an occasional series - we take a closer look at one of the clubs who have left a lasting impact on these pages: namely, Wrexham FC.

When Wrexham visited the Dripping Pan, Lewes in February of last year, I for one expected them to come down with a high and mighty even aloof attitude. Nothing could have been further from that there truth. Dean Saunders took time out to talk to EFW, their fans were superb both on and off the park and in the WSA (Wrexham Supporters Association) they had an organisation to be proud of.

So EFW teamed up with Mark Griffiths of the aforementioned WSA this week to delve a bit deeper into Wrexham FC and amongst other things; their support, rivalries and of course where we can grab a nice beer if we were ever to visit their splendid old Racecourse Ground:

Impressive to be honest! Attendances have help up pretty well through the years of turmoil and even relegation to The Conference didn't dent the figures until our season went down the pan in March and April. In fact until that point although our attendances were down on last season, there were actually more Wrexham fans attending! It was the big drop in away support which pulled the overall figure down. I think there's a fresh loyalty created by suffering together which I feel rather proud of!

We take a good contingent to away games too - we're helped by the fact that there are lively supporters groups around the country, particularly the London Reds, who turn out in force down south. Relegation to The Conference must have been a godsend for them - every other week we're playing on their doorstep! In terms of volume, I think we're pretty good. Certainly a good cup tie at The Racecourse or an away match like Burton last year where we filled half the ground sends a tingle down your spine! The atmosphere was terrific on the first day of the season and it was a shock when the attendance was given at only three and half thousand as it felt and sounded more like five. The following Saturday we went to Crawley and the 200 away fans were considerably louder than the 800 home fans, although neither contingent could drown out the shouting of Steve Evans, sadly!

What is the away allocation given to teams at the Racecourse Ground and has anybody actually filled that in recent years?

Until about a year ago we used to give a whole stand to away fans, and once or twice a season it'd get close to capacity or full. Now we give a section of the main stand - I suspect it holds around 500 - and last season only one team (Altrincham) brought more than 200 fans.
It's still a nice ground - the terraces have been seated so it's an all-seater now as sadly The Kop has been closed. The development has divided the fans, who are understandably very sensitive about such schemes after what we've been through recently. It's making match day a little awkward as most of the club car park is closed and there's a huge red wall sectioning off the building work which stretches round a quarter of the ground. The concerns about the redevelopment are where the profits go - we've been told the club will benefit massively from it. but whether that's crafty legalese or genune's splitting supporters - and the fact that it's being done in stages, and a new stand's the final phase. Thus far there's no planning permission to build a replacement stand and therefore no guarantee there'll be one.

Who are Wrexham's main rivals?

Chester, Chester and Chester. We don't get along. Having said that, when Chester have been in difficulty off the pitch, we've always been concerned as we don't want to lose their rivalry. Likewise, when we were in danger of disappearing some of Chester's fans gave superb, highly visible support. Wrexham's fans find City's current problems worrying. No fans deserve the problems they've got a the moment. The thought of them going to the wall is horrendous.

As for other rivals, Shrewsbury Town is a derby of sorts, although I always feel it's more keenly felt at their end than ours, Port Vale games can get rather unpleasant off the pitch and Cardiff don't get much sympathy up here. When they got to the FA Cup Final and kept talking about how all of Wales wanted them to win it was pretty difficult for a lot of us to stomach! Mind you, I'm sure it would have gone down even less well in Swansea! Is there an ultra culture in Welsh football?

Naturally things vary from club to club. Certainly at Wrexham we have a superb group of lads called "The Twelfth Man" who embrace the positive side of ultra culture, making lots of noise, bringing in banners and always coming up with new songs. They've arranged events like a scarf day where every fan going to a game got a free scarf and are a superb bunch.

Yes, and you often see Wrexham banners at the away matches. Having said that, the fact that virtually all the games are now played at the Millennium Stadium makes attendance a lot more difficult. We all hark back to the good old days when internationals were shared between Wrexham and Cardiff.
On a recent trip to Wales, I was quite taken aback with the North/South Welsh divide. Does that rivarly manifest itself during Welsh national games?

It certainly used to: I remember being in Wrexham's Kop as a kid and hearing the fans chant for Wrexham or Cardiff rather than for Wales! I don't think it's as pronounced now, but I could be wrong. It's an issue which transcends sport though: politically we feel we've been by passed. It always seems like there's plenty of Welsh Assembly funding sloshing around for projects down south, whereas we are still waiting for a promised direct train link to Cardiff!

That's enough about rivals, do Wrexham have any 'friendships' with other teams?

We made a lot of links during our troubles. The support we received was wonderful and a Fans United day was held at The Racecourse which attracted seven thousands fans, many travelling across the country. Most obvious are Brighton, as a core of their supporters gave us wonderful support and drawing on their own experiences, gave us advice on what we should do. I'm very proud of my Wrexham/Brighton scarf. Personally, I have a genuine affection for Eastbourne and Workington after our trips there last season. I hope you're appreciating my bias towards Sussex!? (absolutely spot on, aside from Eastbourne - Ed).

Tell us a bit about the WSA. There really is some splendid stuff on that website with well written blogs and videos.

Cheers! We love doing them. We started off as a hospital radio broadcast back in the 1950's, run by Wrexham's Supporters Association. Recently we've looked to expand though: we do commentaries from all games for the club's website and produce podcasts after every game, plus chat show style podcasts every week with focus on Wrexham but often go off topic to discuss non-league or Welsh footy matters. We slap in the blogs for good measure too! It's all hosted on the Supporters Association website, of which I'm the webmaster. I'm currently completely redesigning it, which is a lot more work than I anticipated.
What is the best football ground in Wales?

As I follow Wrexham home and away, I don't get much chance to see grounds that we don't play at. Also, as Cardiff and Swansea have moved well out of our orbit in recent years, I haven't been to their new grounds, so I can't judge them really. Cefn Druids ground is quite nice - a bit like Lewes with grass banks around the pitch.

Let's just say there were good reasons for Swansea and Cardiff to leave The Vetch and Ninian Park!

Has the novelty of being in the Football Conference worn off?

Not for me - I'm really enjoying it (while obviously wanting to get for the good of the club!). The welcome you get at most clubs is terrific: Lewes, Eastbourne and Workington particularly stood out as memorable days out last season. That said, the totally random nature of the Conference refs and administrators is something that wears a bit!

Do you still harp on about those famous cup runs and the wins over Arsenal and Porto because I would!?

Absolutely! If you can't wallow in your past what can a football fan do? We were amazingly consistent in the cups. I remember us playing Ipswich in the mid 90's when they were in the Premiership and feeling beforehand with absolute certainty that we'd beat them - it just seemed so inevitable. And of course we did! The Porto game was perhaps more remarkable than the Arsenal game. Although everyone knows we'd finished bottom of the the league the season before and Arsenal were champions, the fact was that we were on the up - we were promoted the next season. In contrast, the side that beat Porto was genuinely poor. We were strapped for cash, lost every game between the two legs emphatically and struggled to stay mid-table in Division Four.
Who is considered to be Wrexham's best player of all time?

I guess it's a toss up between Tommy Bamford (every club has had one - a guy who played before the second World War with a phenomenal scoring record - over 200 goals approaching a goal a game) and Arfon Griffiths, who played the most games for us, either side of a spell at Arsenal. He was a Welsh international and went on to be our player-manager when we enjoyed our greatest ever season, winning the 3rd Division title, the Welsh Cup and getting to the quarter finals of both FA and League Cups.

The Red Dragons or The Robins?

Call me an old stuck-in-the-mud but it's The Robins for me.

Got to be a stickler for accuracy and point out we're a town. We applied twice for city status in the last ten years but were beaten by Brighton (understandably) and Newport (less so). We were hit hard by the decline of the mining and brewing industries - we're a brewery and market town in essence. It's pleasant enough - St Giles Church in the centre of town is impressive - bit I guess most visitors here use us as a base to explore the surrounding countryside and tourist attractions.

We like a pre (and post - Ed) match beer on this site, can you recommend us any nice pubs?

The Turf is actually on the corner of the ground - in fact its attic was the changing room for decades and until the new stand was built in the late 90's fans could watch the game from its balcony. You can still see the balcony from certain angles, but it looks rather forlorn now as it faces a wall of corrugated metal!
The Turf - Right what's everyone having!?
* Beth sydd yna i ddim hoffi!? = What's not to like

Wrexham have supporter links with ADO Den Haag, St Pauli and Livorno, flags are present at most home and away games