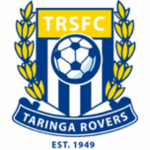 I wanted it to be a derby, I wanted it to be a derby so bad it wasn’t funny. I’d been looking forward to this game for months. In fact, as soon as I heard ‘The Students’ got promoted my mind ran with the notion of; University of Queensland – Taringa Rovers derby day. What am I on about? Well, firstly a little foreword and some background.

This match takes place in the city of Brisbane, Australia. Australian association football suffers quite a bit due to a few key points; Firstly it’s the 4th to 5th most popular sport behind Cricket, Australian (rules) Football, Rugby League and Rugby Union (the last is debatable…). Secondly, the 6 year old national ‘A-league’, a franchise style league with no promotion/relegation system in place is at a crossroads facing dwindling crowd numbers and an arguably suffocating television rights deal versus a general lift in the standard of play and skill in the past year or so. Before all of this was a national league named, the very original; ‘National Soccer League’ (NSL). To give you the best summation I have ever heard of some of the issues that faced the NSL I will leave it to a quote from European football weekend’s Phil Withall;


“If you think of, say transporting any European conflict 15,000 miles and putting a football shirt on it and adding 1970’s style English hooliganism, well that was pretty much the state of play.”
Truer words have never been spoken. The league was plagued by high profile violence between what are known in Australia as ‘ethnic clubs’. Although they were the pioneers of Australian football originating from the late 1800’s through the world wars and of which a lot are still operating today, the prevailing consensus was that they alienated the Anglo-Saxon, Anglo-Irish majority population through retaining strong links to their cultural heritage. Flick through a telephone and business directory in Australia and you will see examples of this; 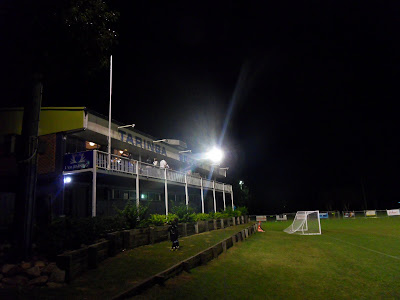 Skip forward to 2005, the NSL was made defunct and old clubs dropped in favour of the new A-League which left a considerable amount of bad blood between the old ‘NSL-supporters’ who’s clubs had driven the development of football in Australia, supplied players to the national team, played in top flight football since their early days and were now (and still are) residing in state league’s being told they are too ‘ethnic’ to compete in a national competition pitted against a new, some-what flawed, arguably soulless, plastic competition trying to undo social and racial stereotypes prevalent with the majority of Anglo-Australians.
Brisbane has luckily kept its nose clean of most of this recently. There isn’t likely to be a riot anytime soon put it that way. The resulting state of play at the moment is that the country is made up a national competition and the rest are independent leagues making the football pyramid looking more like the football ‘chewing gum mashed under the park bench’ shape.

The whole reason I explained that brief history of domestic Australian football was due to the fact that this match is in Football Brisbane’s flagship, the Brisbane Premier League (BPL). And a lot of the teams in these leagues are from grass-roots ethnic origins and to explain the large gap and disdain some clubs hold for what is now the elite level of play in Australia. I’m relatively new to this whole Football Brisbane business and simply selected my allegiance to the University of Queensland due to me being alumni and the home ground’s extreme proximity to my house. I had casually followed scores online last season and I’m quite enjoying the time I’ve been having whilst the national comp is on its off-season; my main reason for sourcing local football. I was joyed when UQ was promoted to the BPL from Division 1 and previously attended 2 home matches for The Students this year, one, at the UQFC’s traditional home; ‘Oval 3’ on the UQ campus which is little more than a field and a tiny building housing the canteen, a 1-0 win for The Students over Capalaba. The second, last weekend at their new ground (devastated by the Queensland floods a few months prior), 2 minutes walk away through the campus at ‘Oval 5’ that is usually a rugby pitch with an athletics track around the outside. It’s relatively new and features a large permanent grandstand giving it a certain ‘stadium’ quality that is undoubtedly the most impressive in the league. Taringa’s fortunes however have been mixed this season. Having been in the Brisbane’s top league since its promotion in 1983. They have failed to score major points getting only 1 win and 1 draw from 6 matches including an 11-1 home drubbing from Wolves FC. 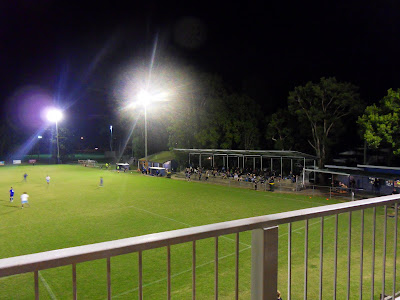 At this point I should say this isn’t a match report or a tale of a memorable football weekend, it should be more like the definitive guide of how-not-to-do-an-EFW. Firstly as you may of noticed, this match isn’t in Europe, secondly the weekend didn’t really play out to plan. In fact the only thing E, F and W about this was 90 minutes of the F. Saturday came around; the day of the game and the hours leading up my friends ditched me quicker than English fans supporting the team at a world cup. For one various reason or another they left me high and dry to the point that even my girlfriend felt sorry for me and offered to go. Her proposal was considered and rejected out of kindness from myself mainly due to her dislike of what she terms ‘random football’; consisting of a match between two teams she doesn’t care for. Disappointed but still buoyed by the potential of a good match and defiance to go despite the progression of things I trotted off to Taringa. The journey to the ground was long and arduous; the 3 minute car trip was punctuated by brief periods of excitement about my first BPL away game intermixed with periods of frustration being stuck behind a Volvo doing 10 under the speed limit.

Arriving at the ground I was impressed by the setup of the field. Along the sidelines there was a small, read tiny, stand flanked by a canteen and a BBQ running. The other sides of the ground were bare with sponsorship boards attached to what appeared to be temporary construction site fencing, made permanent. After quickly enquiring where the bar was I headed off towards the large double story clubhouse complete with terrace/veranda/balcony on the second floor. Up the stairs and into a large social area with pool tables I ordered myself a lager, all bottled and none on tap unfortunately. Never the less it was relatively cheap and I went to said balcony to grab a seat and watch the game. The other end of the balcony was packed with Rovers supporters and before kick off my end of the balcony was filled with UQ supporters and reserve players enjoying a drink. The atmosphere was jovial and everyone was looking forward to what was sure to be a good game. There were some brief chants from the Taringa supporters before the game got underway which managed to get the rest of the crowd in the mood to see this apparent local derby. 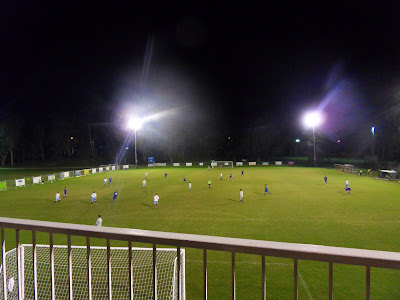 Post kick off it didn’t take long before the first goal; a mash of boots in the box caused the ball to flick out to Paul Sludden who graciously flicked it up-and-over the keeper into the back of the net. The bumper crowd of approximately 75 went into raptures. It didn’t take long for UQ to equalise courtesy of a Ryan Solter sizzler from the edge of the 30 yard box. This is the point in the tale where the competition and spirits of the UQ supporters fade away. Before the half time break Taringa was able to score another 3 taking the tally to 4-1 including a master class 2-on-1 play where the ball was taken to the left goal post and passed back to the centre of the 9 yard box where it was slotted through with ease. UQ’s defence had a tough time accounting for the prolific Rovers squad. It was hard to tell whether or not Taringa easily slipped through UQ’s defence or if UQ simply did not mark their players, perhaps a bit of both? At the end of the second and final term Taringa capped off their win with a further 2 goals bringing the total up to 6 vs. 1. The game was finished and whilst the majority of supporters left happy, however, I did not. The students were belted and with the looming Easter break the rest of the season could be a struggle. Only time will tell for this hot and cold, on and off again side. One thing is for sure; Taringa deserved the win, and are now reaping the benefits with what appears to be a very strong season ahead after that 11-1 debacle.

Post game I took a few snaps and headed on my merry way! Most of the crowd disappeared pretty quickly after the match and I was no exception. In the end I had a few mates come around after I returned home and we watched the City v United FA Cup semi and got ridiculously drunk, so that salvages some of my street cred and allows me to put the E and W in this EFW

Of interest to some those whom read Football Nomad, I met founder Andrew Weber’s brother after recognising him from a video. And that’s my story of my EFW. In the end when you have 11 guys in each side playing their guts out and to the best of their ability it doesn’t matter if you’re watching Real v Barca or Taringa v UQ, as long as you’re having fun. Local football is the life blood of the game and if your A-league, La Liga, EPL, MLS, Ligue 1 so on and so forth is taking some time off, why not head down to your local club and see how grassroots football is played and run. Of course, you will probably need better friends than mine!

Nice report but 30 yard and 10 yard box doesn't make much sense. i've seen football whilst i've been over here in Oz and was pretty sure the pitch layout is the same as back in the UK.
Interesting report anyway, didn't know about Australian football before the A league. Such a badly organised league and poor quality.

Look forward to your next report.

Sorry mate, your absolutely right; 18 yard box and 6 yard box respectively. I must of been off my head when I wrote this!