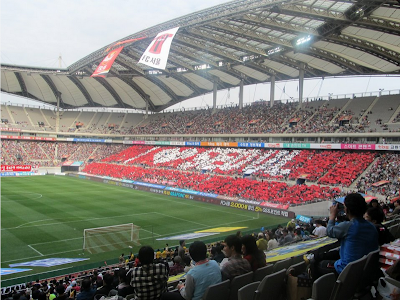 Travelling from the relaxed, curious hubbub of South Korea's single largest populated island, Jeju-do, to the franetic, blurred motion of the nation's capital, Seoul, was enough of a shock enough to leave me feeling somewhat in limbo. Gone were the stunning beaches and waterfalls replaced by towering buildings that threaten only to get larger and larger as the fight for space among a thriving capital city reaches fever pitch.

My initial plans would have seen me visit a Jeju United match to watch a team rooted in a sense of disappointment at a season that has seemingly fallen well below the expectations set during previous campaigns. However circumstance meant that I ended up disregarding the need to see United in favour of the capital club and reigning champions - albeit for only a short while longer - FC Seoul.

The match against Seongham - the K-League's most successful club - promised to be a clash of the titans in spite of the poor performances by both clubs over the course of the season. It was somewhat disappointing to catch a match between two traditional powers so close to the end of the season where neither side had particularly much to play for other than pride - this was after all the final home game for Seoul.

Finding the ticket office proved to be the most difficult part of the afternoon. The Seoul World Cup Stadium is a 66,000 seater behemoth that takes a bloody long time to walk aimlessly around multiple times. Judging by the large signs that surrounded the stadium I could buy a ticket from one of four offices situated at two ends of the ground. It sounds simple but when the signs are out of date and leading you to ticket offices that are in fact no longer in use it becomes a little more complicated. However after blindly heading up the ramp that towers over a main road up to the stadium's first tier I finally managed to trade my 7,000 won - just under £4 - for a seat in the stadium. 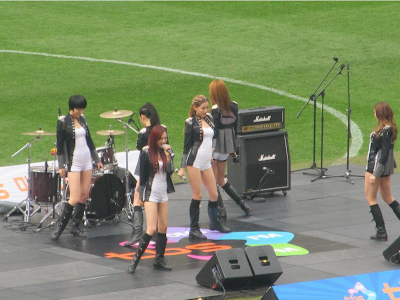 The pre-match entertainment contained a large helping of the X Factor. 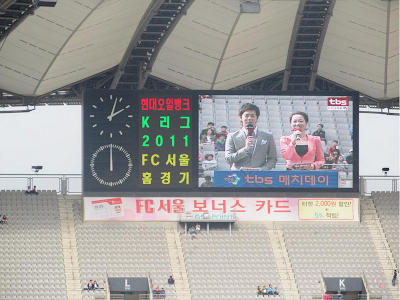 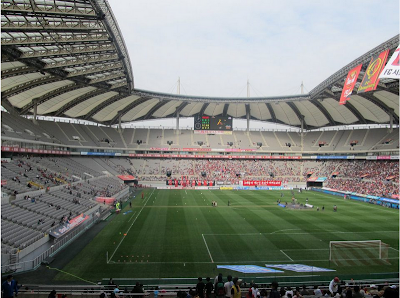 The Seoul World Cup Stadium aka The Sangam Stadium. Built for the 2002 World cup and designed to represent the image of a traditional Korean kite.
The game itself was a fairly eventful and entertaining affair. Both sides seemed intent on attacking and Seoul intially started on the front foot with Mauricio Molina and Dejan Damjanovic linking up nicely and looking most likely to break the deadlock. After 20 minutes there was a lull in the game - as well as in the stands - which seemingly caused the big screens to light up and announce that it was 'Vuvuzela Time' followed by the dispicable din of thousands of horns. They're bad enough on television but in real life it only gets worse - afterwards in the stadium shop I witnessed an old man, possibly 70ish, attempting to draw noise from a vuvuzela and I think I died a little inside.

I had initially looked on mockingly at a small band of fans towards the front of the stand where I was seated - next to a large collective of military types - who donned Seongham's bright yellow shirts and chanted relatively proficiently. I thought it somewhat cute that this tiny band of merry men had made the trip to the capital to support their club however upon Seongham opening the scoring - through Sung Chan Jeon after 25 minutes - I was slapped in the face by some crazy occurrence. The entire stand cheered. Was I somehow unwittingly seated in the away stand - despite there being no pre designated seats?! No, as it turns out, I was not sat in the away end for as Seoul grabbed their deserved equaliser the entire stand again erupted in cheers.

This struck me as stange having only ever really watched football in the flesh in England where the tribalist manner of the game tends to lead support towards one team or another, with very little in between. However it seems as though Korean football is yet to truly establish a true identity for itself among its people. The stadium was fuller than I had anticipated however it seemed to be predominantely made up of children and their parents who appeared to view the football as merely being a day out - as opposed to a signal of commitment to FC Seoul.

Seoul's equaliser came through Tae Hwan Kim who's goal just before half time brought Seoul back into the game after a period of frustration. The goal also saw a fresh rendition of a song that flowed along to the tune of 'If You're Happy and You Know It Clap Your Hands' - whether they were the actual words being sung, however, is another matter altogether as my Korean leaves much to be desired. SSID (Seoul & Sun In Dream) the mascot. An extraterrestrial, obviously. SSID was beamed down to the stadium in his intergalactic spaceship in 2006. 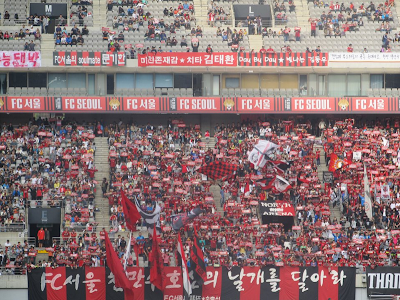 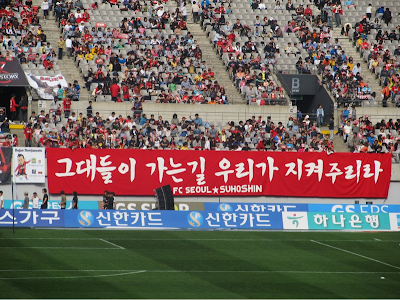 You are my Suhoshin
The half time whistle brought about another unexpected surprise. While I was tucking into another kimbap the stadium announcer, rather giddily, said something to the delight of much of the crowd who were actually paying attention. It turns out that former Tottenham Hotspur full back Lee Young-Pyo was in attendance and onto the pitch he strolled to give, what I can only assume to be a truly memorable speech, after picking up an award of sorts.

The referee's whistle announcing the beginning of the second half was met with the loud crack of red fireworks which further added to the already surreal string of events that had already taken place - did I mention that I bought my kimbap from a supermarket built into the stadium? The second half itself threatened to be a fairly drab affair as neither side could quite find the final ball to create a signficiant chance - despite Seoul dominating possession of the ball. However with just over 10 minutes to go - the obvious fan's favourite - Damjanovic produced a moment of brilliance that put Seoul ahead. His swivel and volley from the edge of the area, despite him losing his footing, was a goal that any forward would relish and it sent Seoul on their way to the three points.

Molina later bundled home a header from close range with merely seconds left on the clock and so when the ref blew for full time the curtain was drawn on Seoul's season in their home city. The inevitable lap of honour, applauding the 40,000 plus fans, ensued with a certain degree of appreciation sent back from the depths of the stands as the stadium emptied at a rapid rate.

My introduction to Korean football was both eye opening and interesting. The enticement of so many families to watch Seoul is obviously a promising development as the club looks to ensure that future generations of fans are secured. There are many nation's across Europe who are attempting to acheive just what Seoul have managed to in order to reduce the militant nature of the game and secure its future as a spectator sport. It's because of Seoul's desire to aid the development of new generations of football fans that the gimmicks of fireworks and vuvuzelas are necessary - however one would hope that somewhere down the line such methods will not need to be utilised. 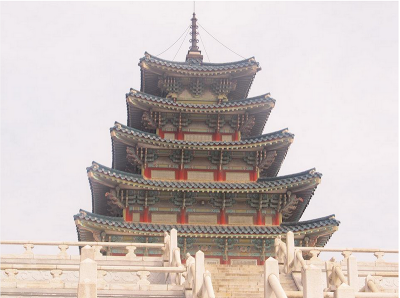 Tremendous looking club shop - tick*. *Might not actually be the club shop.
Follow both Dominic and European Football Weekends on Twitter
Posted by Danny Last at 10:02

The lack of real support for FC Seoul is partly due to the fact they're the Korean MK Dons, LG shafting Anyang Cheetahs - ironically Lee Young-pyo's former club - in 2004 when they relocated them to fill the stadium in Seoul.

I'd come just 4 the babes in the concert...
www.football-bear.com