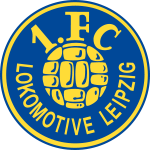 The Leipziger Derby
We're acquiring a bit of a thirst for local derbies here at European Football Weekends. Following the rabid success of the Spakenburg derby, we're heading off to Germany in a couple of weeks to see Hertha Berlin take on FC Union Berlin before heading down for the big one in Leipzig: Lokomotive Leipzig v Sachsen Leipzig.
The Leipziger Derby takes place in the NOFV-Oberliga Süd in the fifth tier of German football. So what's it all about? EFW dialled up Marko Hofman from LOKruf broadcasting - who cover Lok Leipzig games on German radio - to find out more about Lok and the derby:
How deep rooted is the rivalry with Sachsen Leipzig? It's very deep rooted. It goes back to 1963 and a decision of the city officials who said that the best players of the Leipzig should play for Lokomotive (then SC Leipzig) and Sachsen Leipzig (then Chemie Leipzig). Officials of the football association deciding which players have to play for which clubs was not unusual in times of socialism. If a player didn't comply to the rules he was banned from the highest league for a limited amount of time - normally a year or two.
It was unusual for city officials (which were strongly connected with the socialist - the only - party) to make these decisions though - and that's what happened in 1963. Their plan was to help Leipzig achieve a more prominent role in international football. So all the so called good players played for SC Leipzig and the so called bad for Chemie, but Chemie won the league this year and SC came third. The plan didn't pay off until 1966 when Lok beat Eusebio's Benfica and earned its merits in Europe, beating two English teams in the UEFA Cup 1973/74 (Ipswich and Wolves), before being knocked out by a third in the semi-final (Tottenham).
I've been watching a few clips of the derby on You Tube and it would appear that violence is never far off the agenda. How safe is the match to watch for the neutral fan? I'd say as a neutral fan you are on the safe side unless somebody fires a signal rocket into the sector you are sitting in. That has happened a couple of times, but without anybody being hurt. However, if you support either of the two teams, it doesn't automatically mean that you are in danger. Fans of both teams know where they shouldn't go on match day and which tram they better use.
Note to self: practice the art of avoiding signal rockets before heading down to Leipzig.
What is the atmosphere like on derby day and does anything else come close to it during the rest of the season? There's nothing like derby day throughout the season. It's a tense atmosphere in the city (not meaning tense in the sense of aggressive), and every fan looks forward to the match. No one wants to lose the game, because if you do the following days at work, university or school will be a nightmare. 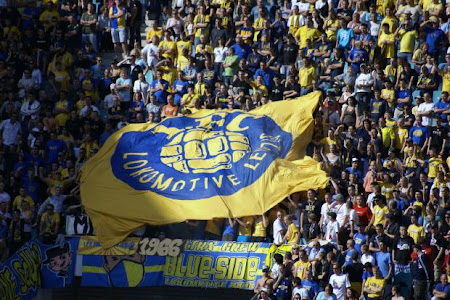 I hear the derby has already been postponed three times already this season, was that because of the weather? It was actually the season-opener but was postponed the night before is was due to be played. A flood had affected East-Saxony and lots of policemen were required there, meaning not enough of them would have been in Leipzig to make the game safe. The second time the game was postponed due to clash of dates. Three players of Sachsen Leipzig were invited to play in an insignificant game of the insignificant Under 20's team of Saxony. Sachsen asked for a new date. The third time the game was due to the heavy snow we had in December.
One thing the two clubs do agree on is a mutual disliking of RB Leipzig. Would that be fair to say? Yes, pretty much so. You won't find any true football fan in the city that likes RB. But apart from that there is nothing else both clubs share in a positive way.
Do you prefer watching 'Loksche' in the Bruno Plache Stadion or the Zentralstadion (I won't refer to the latter as the Red Bull Arena if you don't mind)? You are very welcome to speak of the Zentralstadion. Again: You also won't find any fan of the two teams saying Red Bull Arena. The Zentralstadion was built by the people of Leipzig after the war. It has seen many great sporting events and it will forever be the Zentralstadion. Answering your question, I prefer watching "Loksche" in the Bruno-Plache-Stadion. It has an old wooden stand and has remained in the shape of 1922, the year it was built. There's no better place to inhale football tradition.
When was the last time the derby took place outside of the Zentralstadion? In 2003. It was the last derby before the bankruptcy, in fact one day before. Since the resurrection of football tradition in Probstheida (the district the stadium is located) every derby has taken place in the Zentralstadion.
Is there a fine line between the ultras and hooligans in Leipzig? Let's put it this way: Both hooligans and ultras do deal with violence. But, as opposed to hooligans, ultras put most emphasis on acoustic and optic support as their main business. If there is the situation where a fight does arise they wouldn't run away. Hooligans do look for fights, however not predominantly in the stadium any more. The police are very well organised nowadays, and the hooligans have to find more remote places, away from the stadium, to get their kicks.

Lok have maintained a solid support considering the club went bankrupt in 2004 and had to reform. That must be something you're very proud of? Of course it is. To start from scratch was the best thing that could have happened to Lok. A strong sympathy for the club evolved all over Germany and of course in Leipzig. There was a big euphoria. Events with the most capped German player Lothar Matthaeus (he played one game for us in the cup in 2005) and with FC United of Manchester (friendly in 2006) or a game in the Zentralstadium when we were still in the lowest league (attended by 12,421 people - a world record for a game in the lowest football league of a country) helped to create a myth. Lok went straight up into Division five, the games were often attended by 4,000 people or more. In contrast to that, Sachsen Leipzig didn't start from scratch, they disappointed their supporters year after year and now there games are only attended by 1,500 fans (on average).
I've read about indoor football tournaments in Germany. Do Lok partake in these and how is the atmosphere at those games? Lok have participated in three indoor tournaments. In general, the atmosphere is fantastic. The fans are very close to the pitch and - due to the roof - the chants echo brilliantly. But atmosphere also depends on the opponent. If you only play against teams from a lower league, the games can be dull. Matches against teams from higher leagues are often accompanied by loud and long-lasting support.
We like a beer with our football here at European Football Weekends. What is the locals beer of choice in Leipzig? There are several. Reudnitzer, Ur-Krostitzer, Sternburg. Beer is not my drink of choice but as far as I can judge people prefer Ur-Krostitzer.
Is there anywhere else we should visit in the city aside from the stadium on matchday? Of course. The symbol of Leipzig is the "Völkerschlachtdenkmal" (monument of the "Battle of Nations" in 1813), 299 ft. high. Liked by both, the English and the Germans, since it was erected to commemorate the victory against Napoleon's France. It's not far away from the Bruno-Plache-Stadium. Leipzig is also the main scene of the Peaceful Revolution (1989/90), so you should visit St. Nicholas Church (where it all started) and the museum, Zeitgeschichtliches Forum, summarising the events. Another thing is the main train station, which until 1997 was the biggest of its kind in Europe. But as a football fan I advise you to be at the stadium from noon onwards and enjoy watching the people coming to the game.
What is the best thing about supporting LOK? That you support the tradition of football, too.
European Football Weekends will be heading to Leipzig for the derby on Sunday February 6. We've heard from Lokomotive Leipzig, and we'll probably hear from Sachsen Leipzig before we travel. But who to support on the big day?
Posted by Danny Last at 00:15

I've been to a few Lok - Sachsen games before, all at the Zentralstadion. The atmosphere is pretty special, even when the stadium is not even half full.

Would be interested if you found anyone to talk about FC Sachsen, and I could provide you with some background info on the city and the derby if you needed it.

I'm pretty excited about this year's though! It's been a long wait!

@David - We're on the look out for a spokesman from FC Sachsen to address the balance.

Are you going to the match this time around? Maybe we could meet for a pre-match ale?

Yeah I am for sure, doing the same as you (Hertha-Union followed by Leipzig derby the next day) in fact as I'm a 1.FC Union fan living in Leipzig.

Would be great to meet up for a pre-match beer for sure. Where are you staying? Send me an email at cedricrules@gmail.com .

Mmmm, I visited Leipzig in the summer of 2009 and visited both the Bruno-Plache and the Zentralstadions. Really nice city and football culture. I am pretty sure you will enjoy your weekend a lot!