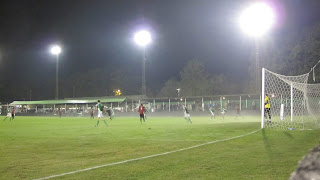 I work late during the week and as such my bosses will only allow me a night off on very special occasions. Previously, I've only been afforded this luxury for Lewes awaydays at Havant and Waterlooville and Braintree Town. Fortunately, Leatherhead away in the FA Cup Second Qualifying Round Reply was deemed worthy of a golden pass.

The Tanners of Leatherhead are managed by Mr Football aka Mick Sullivan. We've had dealings with Mick on these pages before. In his previous guise as gaffer of Merstham, he arranged for our - now annual - MFC team photo, complete with EFW logos. He's one of those chaps who (as long as you procure him a post match beer) will stop and talk footy until the cows come home. Not an idea that Arsene Wenger would entertain - he'd probably claim he didn't see you.

I don't want to name drop here (what!? you've been waiting for months to shoe horn in this story) but the last time I bumped into my good friend; Sky Sports pundit and ex-West Ham legend Tony Gale - you know played for England U21s, everybody has heard of him - he told me that Sully would be welcome at his club any day of the week. Rather like Alan Ball, he couldn't speak highly enough of him.

So my mate Sully v EFW's very own Lewes FC in the FA Cup for a chance to play Vinny Jones and Stuart Pearce's Wealdstone away in the next round (ok, ok, you can have the night off, just get on with it - Boss Ed). 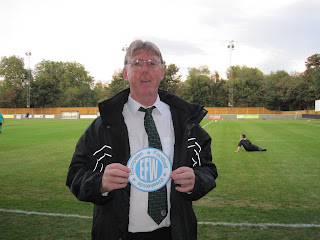 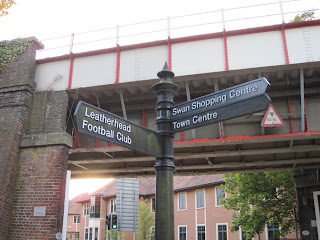 Football or shopping!? Who goes? Who stays? You decide. 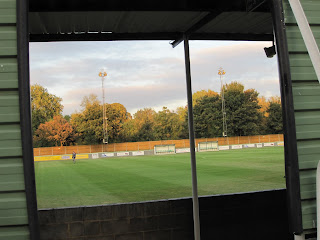 A window of opportunity at Fetcham Grove. 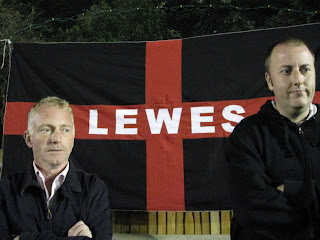 Flag day for Cynical Dave and Big Deaks.
As is the norm these days, Cynical Dave, Big Deaks and I arrived in the clubhouse several hours in advance of kick off. This is part of our continuing quest to pump money into non-league football - in return for beer.

If you want any reassurances as to what the FA Cup means to sides like Leatherhead and Lewes then we need look no further than the establishment we chose to drink in. The Tanners splendid clubhouse was funded by their glorious FA Cup run of 2006/07 when the reached the giddy heights of the 1st Round Proper (Proper!).

In the aforementioned bar we bumped into our pal Rog the Lewes groundsman. We cemented the EFW deal with him to burn a huge 'LEWES FC' into the famous grass bank at the Dripping Pan. After that we teased him mercilessly about the quality of the Tanners pitch. So good that their groundsman Dave Blaszkowsi waltzed off with a highly commended certificate in the recent 2009 Groundsman of the Year Awards. Good old Rog, just don't mention 'fireworks' to him - you'll be there all night!

Now then, what next!? *checks notes* oh yes - the match. Despite being two leagues below The Rooks, Leatherhead put up fine rearguard action. Keeper Craig Bradshaw was in fine form and the live wire Marc Elston gave Lewes all sorts of bother down the wing. In fact I think we'll sign him up if you don't mind Sully!? In an act previously unknown to man - Cynical Dave even praised Bradshaw for his efforts after the match. As for Elston, he went off with leg-knack late on in the match and with that went the Tanners best hope of progress.

Lewes had a procession of possession throughout but it wasn't quite happening in the actual scoring of a goal department. In saying that, they did score a perfectly good goal in the second half but in a mystifyingly bizarre act - the referee decided to disallow it after Dan Beck was deemed to have fouled Bradshaw after the ball had crossed the line. Bradshaw (him again) also saved a penalty from Joe Keehan after David Wheeler had been brought down. 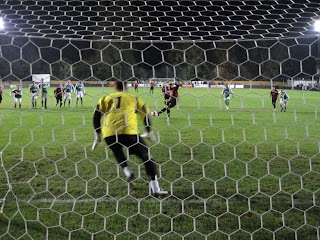 Keehan steps up to send Lewes into the next round.... 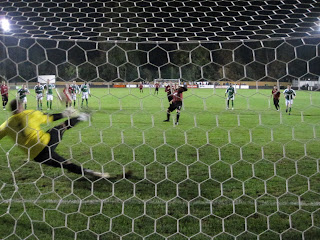 ....but Bradshaw has other ideas and fancies a bit of extra time. 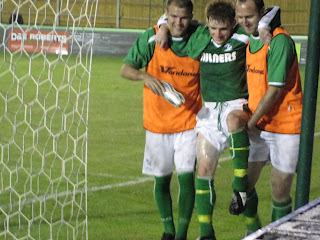 Luckily, subs see funny side to Marc Elston's leg-knack.
I'm running out of superlatives to describe David Wheeler. If that lad hasn't got his Coca-Coca skills badge, I'll eat my hat. Of course it was him who set up The Rooks winner in extra time. As the mist descended on the ground, he cast another spell on the Tanners defence, turning this way and that before unleashing a pin-point cross to Joe Keehan who made amends for his penalty woe by leaping like a salmon and nodding Lewes into the next round. Cue frenzy behind the goal from the 60 or so travelling army.

The EFW team were joined on the last train back to Brighton after the match by a couple of Arsenal fans. They'd been to see another pointless group stage match in the Big Cup against Olympiakos. Steve and Farz - for it was they - argued the case for spending umpty trumpty pounds to watch a routine win in near silence at the Emirates (£13.50 for two hot dogs and some Arsenal branded water by the way). The EFW team on the other hand tried to reason that £8 to see Leatherhead v Lewes was on the whole about 600 times better value. In fairness, they've promised to come and see a match at Lewes in the near future. Another two converts to grass roots football!? Honestly, what's not to like!?

(Please do as they took him ages - Ed)

Yeah alright Ed, you trying taking them after 6 pints you lemon.

(Wind your neck in and just show us the good one of the goal - Ed)
For further reading on The Tanners head to their website or to the rather fantastic unofficial site The Lip put together by Matt Ross.

shouldn't have been such a difficuilt victory in all fairness, but lewes always make it hard on themselves. unfortunately i couldn't make the game however i'll be there on saturday when we play hosts to staines. can't wait to see the engraved 'lewes fc' on the grass bank will definately add even more charectar to our fabulous ground- the dripping pan!

Great blog lads, and pleased you enjoyed the trip to leafy Surrey (everyone always desribes Surrey as leafy). The Rooks deserved to win, you could have had a hatful in the second half. Unfortunately you earned a trip to the badlands of Wealdstone. Good luck - we'll be rooting for you!!

Thanks for the comments lads!

Anon - I can't wait to see the giant 'LEWES FC' on the grass bank either mate. It's amazing the ideas one can come up with after a couple of ales.

Popeye - The badlands of Wealdstone eh!? Do you speak from experience!? Sounds intriguing!

Matt - Cheers mate. The Lip is now on my list of 'faves'.

amazing game, too bad you guys missed it.