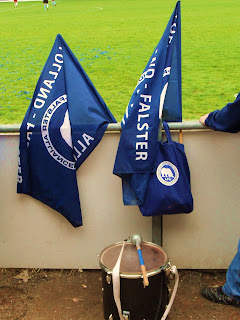 You Are My Solskjær, My Ole Solsk....Oh
Sollerod Vabæk 0-3 Lolland Falster Alliancen (17:05:11)
I guess if there is one person who likes swanning around Europe in search of a foreign field more than I, it's Judith Chalmers Stuart Fuller from The Ball is Round. We've bonded over this thing of ours, and now, in a world exclusive - and as advertised, here he is interviewing the Baby-Faced Assassin, Ole Gunnar Solskjær. At least that was the plan....

Danny called me up at the weekend and told me something shocking. "Stu...do you know you have never written ANYTHING for EFW? You are abroad virtually all week, always finding a game here, there and everywhere but not once have you actually written anything for me."

I didn't know what to say apart from agreeing. So I offered him an exclusive. Not just a run of the mill game, but also an interview that I was doing with Henning Berg AND Ole Gunnar Solskjær. I was off to Oslo for work and as luck would have it (yeah right - Ed.), Lillestrøm were playing Molde in the Norwegian Tippeligean at 6pm. Hard life eh? Danny was chuffed and we started bigging up the event on Twitter. All was going well, that was until I made a schoolboy error. I booked my flight with Norwegian Airlines.

Everything was going well as we were pushed back from the gate by one of those little tug things. Then "bang". The tow bar had snapped and part of it had punctured the plane's front wheel. Not an issue you would think at an airport. But it appears there is no such thing as Airport Kwik Fit so a spare had to be found. We were in luck! One was located....in Oslo. Six hours later I was still in the departure lounge at Gatwick looking at my watch ticking past the point of no return. I waved goodbye to the exclusive and headed back home to take out my frustration on a bottle of Rioja.

So 24 hours later I was determined to fulfil my promise of an article for Danny so was stepping off the northbound train to Helsingør, home of Hamlet, at a small station in the village of Vabæk. For tonight Matthew I was going to a Danish 2nd division game. Not just any old game either. This was a Danish 2nd division EAST game.

This is the 3rd tier of Danish football. In theory only one season could separate either one of these sides and teams like Brøndby or FC Copenhagen (assuming they were relegated). They could meet in the Danish Cup after just two rounds with a favourable draw. Average attendances at this level are less than 300, assuming you do not count canines. Søllerød Vabæk themselves have averaged 300 this season. 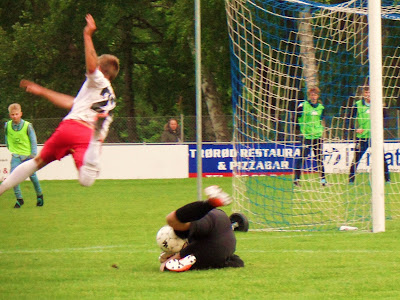 Taking diving to the extreme.
The ground is probably on a par with a county game, although they would fall foul of the dreaded ground grading as they do not have floodlights. Instead at one end there is an open fence where cars in the car park are requested to turn their lights on as the night draws in.

People assume that everything in Denmark is ridiculously expensive. Well you would be right. The twenty minute journey from the centre of Copenhagen costs nearly £18 return, although you can pay for tickets by text message (and forward them to each other meaning that quite a few people can travel for the price of one, but I didn't tell you that). If I was to stop and have a beer and a pizza at the small bistro opposite the station then I wouldn't see much change from £25. But one bargain is getting into football at this level. In fact you could actually watch it for free by standing on the side of the road as the perimeter fence was just waist high. But I didn't want to deprive the club of revenue so I paid my 50 Danish Kroner (about £6) for entry and a programme. About the same price as your Emirate burger.

The law in Denmark states that you cannot watch any game of football unless you have a beer and a sausage. But there is a custom to this. Buy your beer first, drink it, buy another then go and get your sausage. Add a dollop of ketchup and mustard, grab a bit of bread and proceed in this order. Sausage, dunk in ketchup. Take a bite. Dunk in mustard, take a bite. Pick up bread. Eat a small chunk. Repeat until all gone.

The ground is unusual to say the least. There aren't any stands as such. Along one side of the pitch is a big sort of Scout hut. Metal chairs, the ones favoured by England fans when rioting abroad (lightweight yet accurate from 20 yards) and placed on the top step and so I take a seat in one of these. This, it appears, is the best seat in the house. A door to my left opens and I get a view straight into the away dressing room. A female physio is kneeling in front of one of the players, applying a strapping it seems to his inner thigh. No 18 stickers on such things over here. After all Denmark invented pornography so I am reliably informed by people in the office in 1969 by becoming the first country to legalise it. So porn, beer and Lego were all born here..Something for all the family! 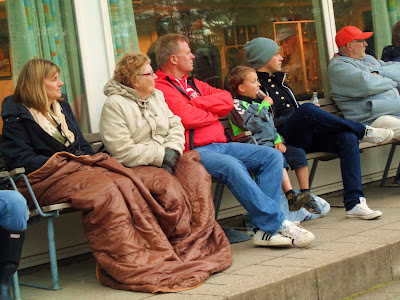 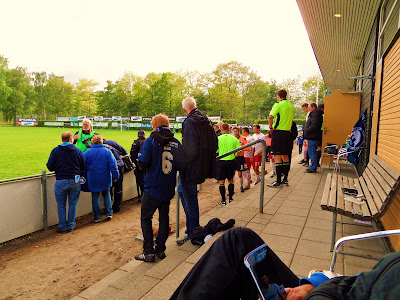 VIP seats filling up fast
Søllerød Vabæk is, as many clubs are in Denmark, a result of a merger. Their one notable claim to fame is that they were the first club of Andreas Laudrup, son of Michael, grandson of Finn and nephew of Brian. He didn't hang around long, failing to really understand the sausage ritual, heading off to Real Madrid for a while before returning home to FC Nordsjaelland where he is still dining out on the name of his father. They are also the home of the Danish national team when they are playing at home and a signed shirt from the 2010 World Cup squad takes pride of place in the bar alongside a spade.

The visitors are from Falster, one of the islands to the south of Copenhagen where no one really visits. It is sort of the end of the earth for Danes. However plans are afoot for a 12 mile tunnel underneath the Fehmarn Straits which will cost 32 Billion Kroner (about £4billion) which would breathe some life back into the region. Lolland Falster Alliancen came into being after another one of these mergers, this time between B1901 and B1921 of course. They had brought a few fans with them to add to the atmosphere. Well, in truth they were the atmosphere. A drum, two flags and a strange woman who made meowing noises as the teams emerged.

So now you are expecting an in-depth tactical analysis of the game aren't you? Well, the home side, let’s call them BSV for simplicity lined up with 3 at the back, 2 in midfield and 1 up front. Hair bands that was. For some reason the Danes love a hair band. They don't even have to have particularly long hair to put one in either. They are the snoods of Danish football and have no place in the game. 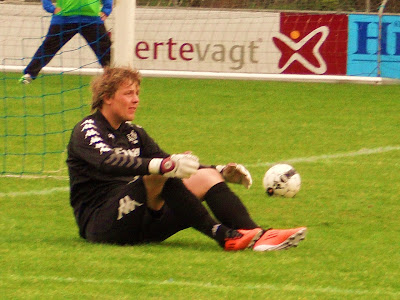 A graduate of the Robert Green school of goalkeeping. 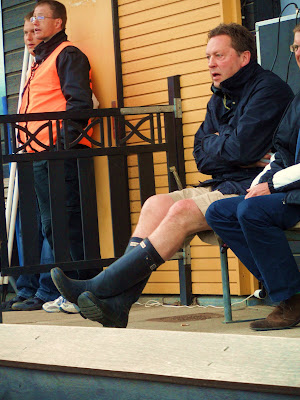 Give it some welly my son.
Only one team can be promoted from the 2nd Division, and both of these sides were way off top spot, but safe from falling back into regional football. So it was going a Biscotto game. One of those Italian inspired end of season games which miraculously always ends in a draw. Well that is what I assumed would happen. Instead the visitors tore into BSV and were unlucky not to take the lead in the 15th minute when Wagner waltzed through the defence only to fire wide.

After BGA hit the bar with a speculative shot from the fantastically named Christian Smed, it was all Lolland. First Jensen scored from close range having been put through by Anders "Woolly" Vest Hansen, who then doubled the lead five minutes later with a stunning shot from distance and a not too shabby back flip in way of celebration.

Both teams emerged from their doors to Lola by the Kinks at the start of the second half, the discs being spun by a man wearing shorts and wellies as if making a personal statement. The crowd had been swelled by the Doggers. Such a team over here actually refers to people out walking their genuine dogs. There isn't an underground movement of performing sexual favours in seedy car parks using coded signals. Danes are forthright. If they want to bring their dogs into football then they will. As the game restarted I counted 8 canines making a healthy 10:1 human to beast ratio, easily the highest on my travels this year.

If truth be told it was getting a bit nippy. I occasionally forget when I am out here how cold it gets at night. I am seduced by the warm afternoons, and the sight of the Danes stripping off outside my office window and then I go out at night wearing just a T-Shirt. Well here there were people with blankets wrapped round them. Didn't I look Johnny Foreigner with my short sleeves?

The football didn't exactly warm me up either. Both teams had settled for a 2-0 win by the looks of it and the ball spent most of the time within 10 yards of the half way line. So it came as quite a shock when Jensen added a third with fifteen minutes to go from distance. In fact such a shock that the keeper was chatting to one of the ball boys at the time, and despite his back peddling he couldn't keep the ball out. I was bored by this point and only staying around because I had to wait for the half hourly train back into town.

Football isn’t always the winner at the end of the day. My plan was by now I would be basking in the glory of some exclusive titbits from an ex-Man Utd legend. Instead I was wiping dog shit off my shoe in a Danish 2nd division ground. Football is a fickle game isn't it?


For more of Mr Fuller's work point your mouse towards the majestic The Ball is Round.
Follow both The Ball is Round and European Football Weekends on Twitter.
- Feel free to comment below -
Posted by Danny Last at 11:53

You got it all wrong with the name :D