A bridge too far!? 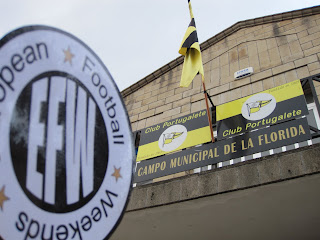 Punch Portugalete into Google and it will probably direct you to its most famous landmark: The Vizcaya Bridge. As nice as that bridge is, there is something in this suburb of Bilbao that I think usurps their oldest transporter bridge in the world claim. That fact ladies and gentlemen is thus: They have two football grounds right next to one another (gasp - Ed).

More of the two football grounds later, lets talk bridges for now *sigh*. My name is Danny Last and I suffer from vertigo (clap clap clap clap clap). There I've said it. All part of my therapy apparently. Anyway, that bridge is 50 metres high and 'unfortunately' it is possible to reach the summit courtesy of a pesky lift.

Despite my little problem, I ended up walking across that blooming bridge not just once but twice. The reason!? I could see in the distance - from ground level - a set of floodlights and I suspected you'd be able to could get a better view of them from the top. Turns out they belong to Sestao River Club and let me tell you, it was worth a few shaky moments up in heavens to see them in all their glory. You also got a great view of the port and Abra bay thrown in for good measure. 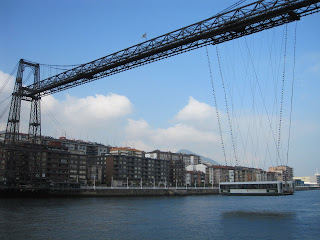 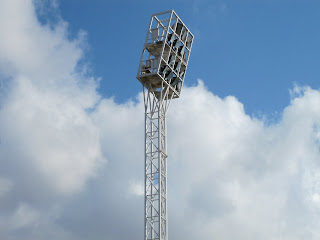 Those floodlights.
Up until this point, I'd been in Spain for a week and had naughtily been enjoying various fiestas rather than attending football matches. I'd made my way up from Castilla-La Mancha to spend five days in and around Bilbao and I was in need of a game. Athletic Bilbao, Racing Santander, Real Sociedad, Deportivo Alaves and every sodding club in the area appeared to be playing away from home. What to do!?

Luckily help was on hand. These days I have a permanent hotline to Mr Fuller, the author of a Fan's Guide to European Football Grounds. He'd been maintaining a round-the-clock visual vigilance on the Club Portugalete website - pressing F5 to update in the vein hope they'd change their rather vague kick off time of 'Portugalete v SD Eibar 5pm??' to a more reassuring effort. The Eibar site had the game listed as being 6pm with no question marks so I went with that.

Upon reaching the Estadio La Florida things took a turn for the surreal. Firstly, nobody was at home. Not great. Secondly, I was ushered into another (another!) stadium next door where my match would take place. Not Club Portugalete v SD Eibar B as I'd thought - that match was taking place in Eibar but a friendly between Portugalete B v Gazteak CF. Not only had I arrived just in time for kick off but - as it was the clubs centenary year - they were knocking out beers for €1 a go. Bingo!

Estadio(s) La Florida. Probably worth clicking this one to enlarge image. 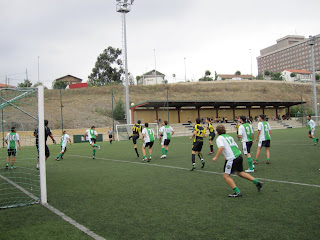 The frantic action unfolds in front of an expectant throng...well more or less. 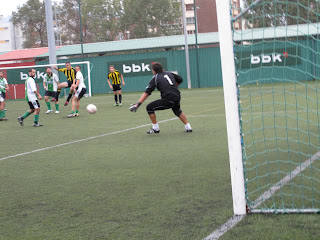 Young photographer of the year captures second goal of the match. 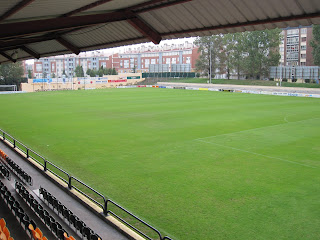 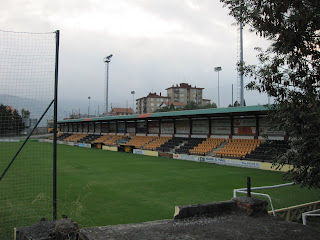 Estadio La Florida - Club Portugalete
The match stank! I could have played in it. It took place on an artificial pitch - not all that uncommon in the nether regions of the Spanish leagues - and in front of only a handful of fans. During slower passages of play though, I could take my €1 beer(s) and pop my head over the wall to take a look at the other stadium - things weren't so bad.

With the home side 2-0 up and the game itself set to be one of the more unmemorable EFW experiences, something noteworthy actually occurred. On 81 minutes a chap from Teakers went in for an innocuous challenge with a Letty defender and broke his leg. There were no medics on hand so one of the fans had to ring for an ambulance. As it was going to take a while to arrive and with only ten minutes or so left in the game the referee decided enough was enough and abandoned the match.

After a very brief period of concern for the player, it was smiles all round. He had only broken his leg after all and luckily everybody concerned saw the funny side and how we all laughed. To be fair the chap who'd acquired leg-knack didn't seem to mind and gave us a Kevin Moran type thumbs up as he was stretchered away in the ambulance.

So a bizarre end to a pretty surreal afternoon. Portugalete is only 15 minutes or so from the centre of Bilbao by metro so I was back into town - in time for a pre-arranged pub crawl around the best pintxos bars - within half an hour of the match being abandoned. Good old life! 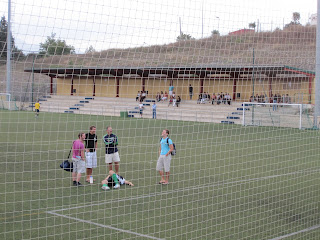 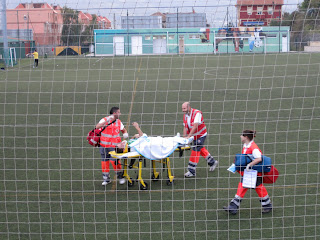 Man gets stretchered off. Luckily, medics see funny side and laugh accordingly. 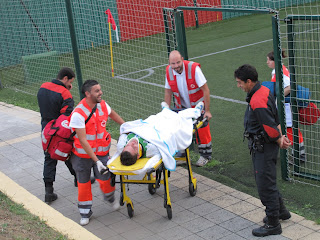 Off he goes to hospital. Everybody now in on the joke. 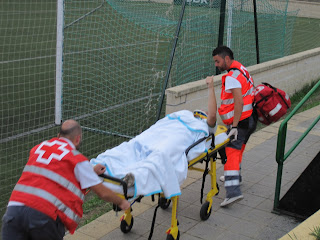 Leg-knack man gives it the Kevin Moran thumbs up. Adios amigo!
- feel free to post a comment below -
Posted by Danny Last at 10:08

Have actually been to see Portu once before. A couple of other nice grounds in Bilbao are Deustu and Campo Mallona. Mallona is on the top of a hill and you can either take the lift up or walk the many many steps up from Casco Viejo.