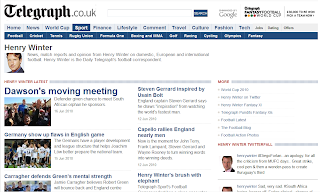 #Winter cheer for #Green
I was given a brief window of opportunity to interview Henry Winter today. Brief of course because Henry is busy out in South Africa, watching three games a day, penning columns for the Daily Telegraph, having run-ins with bull elephants, bigging up the Cup of Good Hop, keeping fit in the gym, appearing on BBC 5 Live and relentlessly updating his much talked about Twitter account.
His Twitter feed has attracted many admirers, over 22,000 of them no less but has also attracted a few dissenting voices. Critics point to the fact he doesn't follow anyone on Twitter - which is meant to be a two-way conversation - and doesn't reply to his followers. Others argue that he's one of the few big name journalists good enough to be on Twitter in the first place.
There's no doubting that along with his work in the Telegraph, his Twitter feed is thoroughly entertaining. His #hashtags #have #become #stuff #of #legend, something picked up by the hilarious spoof from @Harry_Summer. Winter has mastered the art of the "#" now though which is a shame as it amused me for months.
Anyway, enough of Twitter for now. We've an insight into Fabio Capello to talk about, an England player to name and shame and redemption for Robert Green, who as it turns out is the nicest man in football, unlike, well, read on and find out as Henry and I chatted during half time of the South Africa v Uruguay match this evening:
Hi Henry, how are you enjoying your time out in South Africa? Loving it. Ive been covering World Cup matches since 1998 and I love countries that are obsessed with it.

Close encounters with bull elephants, going on safari, better than the football at the moment no? Nothing beats the football, although I'm told the elephant hasn't forgotten. I go to 130 plus games a season and love every one, even the rubbish ones are useful because they keep the sport's hype in perspective.

How much pressure are you under to deliver the England starting XI to your editor prior to matches? Pressure from myself, though its usually a team effort. Capello is difficult to read.

Do any underhand tactics take place to ascertain information from the England camp? Not sure what underhand is. We make calls and use our initiative.

Expectations on England are considerably lower this time around, more so after the USA match. Can this actually work to their advantage? Yes. They have a point to prove.

There were a few England players after the USA game who strolled through the mixed zone pretending to use their phones or listen to music so as not to answer questions. That must be frustrating for you press guys? The players are pretty helpful as a rule.
Any exceptions? Ashley Cole (always the ones you least expect - Ed.)

Conversely, Robert Green came out to face the press and held his hands up
(maybe he could have done that a bit earlier - just kidding). He's a top man
off the field though I hear? Patrick Barclay of the Times even said he had nice table manners. He's a great guy, curious about life and good professional. He didn't deserve the personal stuff.

How does dealing with Fabio differ to the Sven or McClaren? I'm always slightly suspicious of friendly managers and have yet to detect any warmth from Capello, so that's good.

The vuvuzelas are ok out in South Africa obviously, their tournament, their party. Could your ears stand their bashing back in the Premiership next season? I like vuvuzelas. People are too prim. This is Africa. Its the sound of the stadia. I prefer the horns to some of the abuse at English grounds.

The ball is too round, empty seats, ITV missing goals, negative tactics, James Corden, tell us this World Cup will improve Henry! The first games are always cagey. Relax. The party will get going.
Now then Henry, Twitter. You famously don't follow anyone or reply to your 22,000+ followers. Care to explain? I never thought about the great debating chamber Twitter has become. I just thought people might be interested in a little bit of a flavour of life on the road as a football hack. It's just a bit of fun and the occasional bit of info.
You're aware of Harry Summer - the spoof version of your Twitter feed - all good fun eh? @Harry_Summer is hilarious. I even tweeted his link. My kids say its far better than mine. I know my place.
. 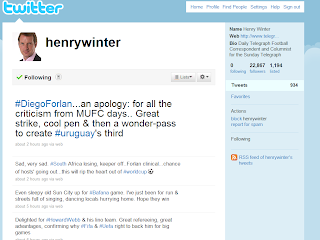 Follow, follow, we all follow Henry. And Harry.
And with that the teams emerged from the tunnel for the second half in Pretoria and Henry was back to doing his day, and night job. I had hundreds of questions for him. Maybe if they weren't all as long as one of Garth Crooks efforts, I could have squeezed in a few more.
Follow EFW and Henry on Twitter.
Click HERE to read some of his work on the Daily Telegraph
Also in this series: Gabriele Marcotti, Barry Glendenning, Sid Lowe and John Ashdown.
- Feel free to comment below -
Posted by Danny Last at 23:24

Good interview Danny, Henry is an excellent journo and although I tend to forget about Twitter I do enjoy his posts occasionally. One of the few hacks who says what he thinks, rather than just spouting out what he THINKS he should think.

@Mike - cheers old chap. It was all too brief but I like to think there is a bit of food for thought in there.

As a lot of this is about Twitter, replies and thoughts have been coming in through there. I shall try and keep you up to speed for those not connected:

@JacobSteinberg (from the Guardian, Football Weekely podcast and ITV minute-by-minute amongst other things) says:

"Good interview and he comes across well. He's right, people do want to hear what a football writer has to say. However one the things on here (Twitter) is the cool debates you can have with people who reply like @johncrossmirror @Honigstein and @marcotti. Ive been discussing this with a few people and when the writers do that in this internet age, their reputations soar"

@JacobSteinberg is well worth following by the way if you're on Twitter.