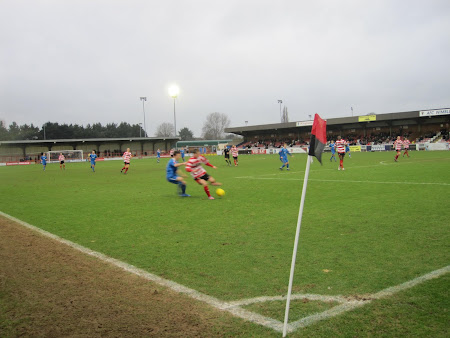 Kingston ‘Buryed’ after 10k challenge
Kingstonian 1-1 Bury Town (16:01:11)
Its been far too long since we covered a non league match on these pages, so here's Jamie Cutteridge putting that to rights with his debut article for European Football Weekends:
Every good story starts with a pun, this is where Moby Dick and Pride and Prejudice fell down, yes we remember their opening lines, but their stories? Well they went nowhere, and the authors were never heard from again. And so whilst ‘Kingston ‘Buryed’ after 10k challenge’ might not be the best pun in the world, buried is misspelt and nor is it factually accurate, but it is a pun and I’m sticking with it.

One of the joys of ‘European Football Weekends’ is the variety of games that they entail. Yes I’m sure the Spakenburg Derby sounds very exciting, but how often do you get to see a top of the table Ryman Premier clash between the pride of Surrey and Suffolk as Kingstonian took on Bury Town. The two teams have both suffered patches of inconsistency in their seasons thus far, but both knew that three points here would put pressure on leaders Sutton, but secretly felt that a point would suffice. As a side note, if you fancy a delightfully middle-class footballing weekend can I recommend Bury Town. Kingstonian’s opening game of the season was there and were met friendly locals, the smallest pub in the country with an impressively dull 90 minutes sandwiched somewhere in between.

Perhaps the most striking thing about Kingsmeadow, is that it is too big a stadium for the level Kingstonian play at. Your average Ryman level ground consists of a couple of open ends, a bit of shelter, and one, small stand, Kingsmeadow is banked on side by one large stand, whilst all the other 3 sides provide stepped terracing. The reason for this is two-fold. At the beginning of the Millennium Kingstonian made their push for league status, finding themselves at the upper echelons of the Conference, as well as winning back-to-back FA Trophies, as such the ground as at a level appropriate for the club’s. Unfortunately, reality kicked in, and the club lurched towards financial oblivion, with a fair degree of mismanagement, and exploitation thrown in. Eventually a stable backer was found, and couple with the need for a home for AFC Wimbledon, the ground was saved, though now under the ownership of the re-located Dons, leaving Kingstonian tenants in their own home. Whilst some bitterness still remains between sets of fans (predominantly emanating from Ks supporters), the rationality suggests the Kingsmeadow, with a superb set of facilities, would be untenable without AFC’s ownership. Big questions still exist about the future of the ground though, as the Womble’s push to league status may see them outgrow it. Being a little outside of the non-descript town centre of Kingston, the only pre-match drinking option lies in the club bar, but this does an adequate job, as I’m sure Danny and Cynical Dave will attest to.

So much of the sport’s coverage that day was focused on the sanitised cess-pit that is Premiership football as a few derbies and a primadonna show filled the gaps between Andy Gray and Jamie Redknapp’s philosophy corner, however the canny football fan in Surrey knew where the real action was. This was proved as upon arriving at Kingsmeadow as the bar was busier than normal pre-match, people knowing that only by arriving early would they get a good view of....Liverpool Vs Everton on the screen. Yes, as pleasant as a non-league high horse is, it is one mainly supported by hypocrisy, my tardiness to the bar was due to watching Villa Vs Birmingham City at home, whilst this website’s editor was in prime of place and was enjoying the super-ist of Super Sundays. I like to convince myself that hypocrisy does not count if it is couple with self-awareness, and this was further proved as much of the discussion in the first half of the game was about the Liverpool/Everton game unfolding with text updates on our mobile screens. There is nothing punk or subversive about the non-league game if it is merely a stop-gap between voyeuristic looks at Andy Gray’s jowls. (Ironically after this ‘bordering on rantish’ paragraph, I should inform you that Gray’s partner in chief, Martin Tyler is a coach at Kingstonian, a well-known fan of the non-league, and a true gent).

The game began in earnest, and after just 30 seconds Kingstonian midfielder Simon Huckle spooned a volley over from 6 yards. This was to be as good as it got for the hosts early on, as they were then subjected to some heavy Bury pressure, predominantly from corners. One shot was cleared off the line, whilst a goal was disallowed for the perennial shoving within the penalty area. So little action was occurring at the end where the Kingstonian fans congregated that the dominant areas of conversation were the goals in the previously-mentioned game at Anfield and the apparent departure of one of the Ks’ midfielders (Jean Silvain Dossou) to Lewes (a fact reported by Cynical Dave, but one that the club’s press officer seemed unaware of, ah the joy of duel-ownership). This news was greeted by surprise amongst Kingstonain supporters, as the player in question had failed to set the world alight after a promising start, and hence a move up the division seemed nonsensical. In fact perhaps Dossou’s greatest legacy will be his posting under an alias on the club’s forum claiming that Dossou was the answer to the club’s weakness in midfield and how he HAD to be started soon.

Kingstonian fans do have a reputation within the non-league for their loud support and the full repertoire of songs was out in force for this game. From (Monday, Tuesday) Matty Gray, through to Don’t cha (wish your keeper was Rob Tolfrey) every player on the pitch seemed to have their own song (though hearing a group of beer-fuelled supporters trying to get out the words to ‘Bird is the word’ in honour of fullback Tom Bird is rarely a joyful experience). This certainly adds something to the atmosphere and pre-match experience of a game at this level, and is something that makes a Ks game worth the trip in itself.

As the half seemed destined to end goalless, a long ball forward let to the Bury goalkeeper (known only as Marcus) having to head the ball away from just outside of his area, before casually strolling back to his goal. In the meantime new signing Alan Tait had collected the ball for Kingston, and put a cross in on a plate for top scorer Bobby Traynor to nod in to give the Ks the lead. There was even time before the half for Ks keeper Rob Tolfrey to pull off ‘one for the cameras’ to ensure the lead was maintained at half time.

Obviously the non-league stalwarts made a bee-line at half time to catch the end of the Merseyside Derby before leaving the bar in time for the second half. Whilst Bury began the half looking for an equaliser, Kingston looked comfortable. This all changed as the hosts were reduced to 10 men as fullback Dean Hamlin was dismissed for tangling with the Bury striker, and as the last man, the decision was as predictable as it was game-changing. There seemed to be little grievance from the home supporters, however replays (yes, the game was filmed, don’t sound so surprised) suggested that contact was minimal. The initiative was with the visitors and it took just 5 minutes for them to draw level as striker Sam Reed flicked in a header from 8 yards out. It now looked as if Bury would go on to win, but a tactical change from home manager Alan Dowson seemed to re-establish the Ks footing in the game and the remaining half an hour ebbed and flowed from one end to another (just mentioning Sky coverage seems to have filled my head with clichés) and both sides had chances to win it. As it was, it remained level, a result both sides may well have taken pre-match, but in the context of the game, perhaps both sides left disappointed, Kingstonian with throwing away a lead and a dodgy decision, Bury for failing to take advantage fully of the extra man. It is difficult to imagine that these two will not be in and around the playoffs come the end of the season.

So a good game of football, a decent ground, good company and good atmosphere, what more could you want? For a start, a headline that works, Kingstonian were far from buried thanks to this result, but the need to avoid ‘Special Ks’ at all costs left me short of options. However Kingsmeadow is situated near the A3 so there was plenty time to rush home in order to catch the end of Super (sickening) Sunday, which makes up for a shoddy headline. Because that’s what it is all about surely?

Good account of the day Jamie. I can vouch for Ks vocal support. Pound-for-pound, I think, they can match any set of fans in the country. Good repertoire of songs as well.

Good to read a decent report on here for a change,a good mixture of actual match reporting and the matchday experience.