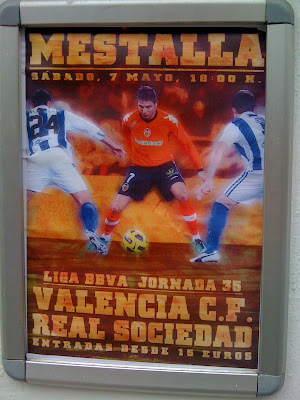 He Bangs The Drum
Valencia 3-0 Real Sociedad (07:05:11)
Kenny Legg is normally one for Adventures in Tinpot. But today, rather splendidly - and after months of negotiations, he has agreed to write for European Football Weekends. Giving up a spot on the terraces of his beloved Weymouth FC, Legg headed to Spain and waltzed straight into one of the best football bars in Europe....

No, its not Danny Last's travel plans for the 2011/12 season but a few of the hundreds of scarves that hang from the celling of the shrine to football that is the Tu Museo Deportivo bar in Valencia. If you've seen Spain play football any time since 1982 you've seen its drum bashing celebrity owner, Manolo el del bombo. By working week a mild mannered bar owner; by football fixture a drum thumping, sombrero sporting, bonkers barmy maniac; and, at all times, available for a photo. 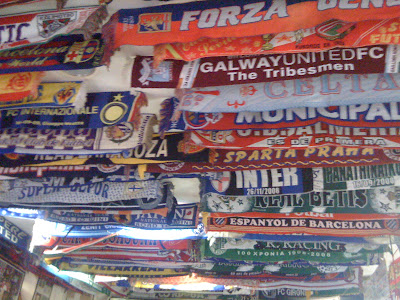 Sadly lacking a Weymouth FC scarf. I will rectify this.
In the time spent in the bar, eh 'researching' this blog Manolo spent his time posing for pictures and in those few hours had more people behind the bar than the entire history of the Queen Vic, The Rovers Return and The Woolpack combined. For each one he wore his trademark hat, posed happily and even found time to pull a couple of cervezas. A doff of the AiT sombrero to you señor. 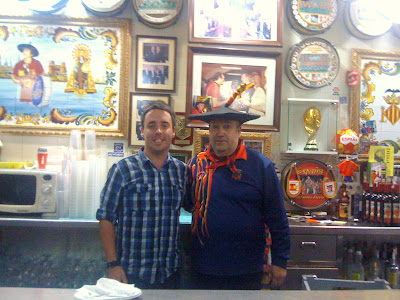 Note to self – purchase mega sombrero, bar and drum.
Its fair to say the man loves a picture. There's not a space on the wall that isn't adorned with his mug. Here's Manolo posing with a Manchester policeman, over here an article from Sport Bild magazine, to your left the King of Spain bows down before Manolo.....you get the idea. He's a big noise in Spainish football – literally. Essentially if Michael Aspel and the 'This is Your Life' crew kitted out pubs instead of dishing out red books it'd look like this. Want a souvenir of your visit? Of course you do! How about a mini football, key ring, some Manolo wine (with mug shot on the bottle, of course) or even some, what appeared to be, Manolo white asparagus. 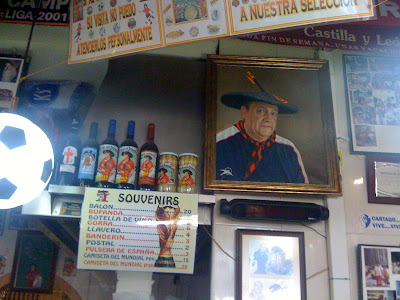 Mo Manolo Mo Problems
My trip coincided with a land rights dispute which meant that the plain on which the rain in Spain mainly falls was unavailable and it had been agreed that Valencia was to host any precipitation this weekend. With a ticket purchased for the huge open stand it was fair to say I wasn't best pleased when a ferocious thunderstorm broke ninety minutes before kick off. The rain wasn't just biblical, it also included passages from the Qu'ran, the Torah, Gavin Peacock's theology lecture notes and a couple of pages from 'The Robots Rebellion' by David Icke and meant that a massive waterproof poncho suddenly became the early evenings fashion must have. 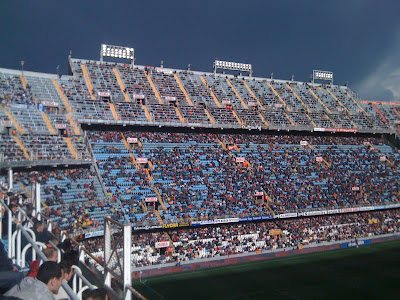 *dons poncho*
The Mestalla is fantastic, with the stands scientifically proven to be the third steepest thing in football, after the price increase in Champions League final tickets and the angle that Alan Shearer's hair is receding at. I made my way up to my seat without the aid of oxygen and settled back for the pre match entertainment. A brass band. The band have clearly spent hours working on their perfectly regimented 1-2-7-7-7-7-7-7-7-7-7-7 -3 formation, deployed as they walk in perfect alignment around the pitch, stopping periodically to receive applause.

Most of the fans in attendance are sheltering at the back of the stands, making the Mestalla look emptier than the Spanish Governments rainy day savings account. Even higher up in the clouds than me are the Real Sociedad fans, about eighty or so; below me about thirty Valencian Danny Dyer wannabes and in the far corner a colourful flag wavey bunch of Valencian Ultras. After a minutes silence for Seve Ballesteros, the match gets under way in glorious sunshine.

Valencia set about Sociedad like a bull set loose from it's unexpected rummage in a china shop and it's only 17 minutes before the announcer can give it the first "Gooooolllll" of the day when Soldado taps in about half a mile below me. The 25th minute sees the second goal, Bruno is given all the time he wants by the siestaing Sociedad back line and he is able to chip it across (or as the Spanish say 'patatas bravas it across') to the on rushing Jonas, who nods it in. 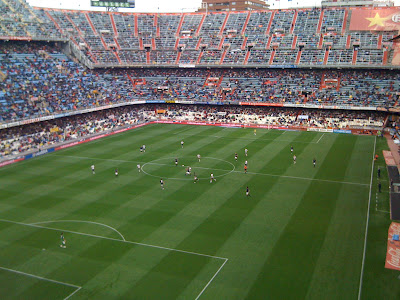 Heaven up here.
Soooooolllldddaaado scores another goooooollll after more poor Zaragoza defending on 37 minutes and the rest of the half is played out to the sound of polite applause and the contented chomping of the obligatory sunflower seeds.

Half time comes and the brass band aren't the only thing walking round as the main Ultras group goes all non league and moves behind the goal that Valencia are now attacking. This creates a great atmosphere as they get the whole ground cheering and clapping along as the team plays football slicker then Enrique Iglesias' hair. With Albelda breaking up play, feeding the superb Banega, who in turn brings in the tricky Mata and Joaquin the football played by Valencia is sublime stuff. Much better than when I saw them against Schalke earlier on this season (a truly shameless plug). 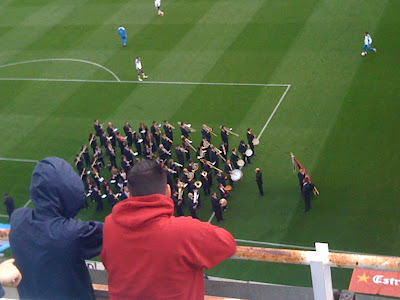 Valencia park the brass.
The second half is comfortable for Valencia, as Sociedad are as threatening as a kitten in a bull ring. The fans entertain themselves by indulging in a paper aeroplane flinging contest, which poses more of a threat to the Valencia goal than Sociedad, and the eating of sunflower seeds continuing a pace. So much so that by the final whistle the huge piles of discarded shells give the Mestalla the look of a bird cage belonging to a budgie that's been comfort eating. 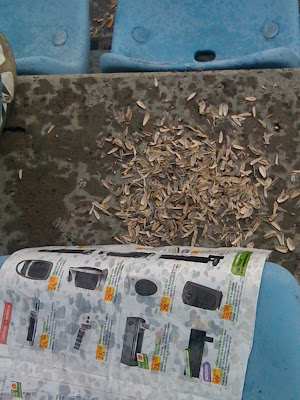 What's wrong with a hot dog? Messy bugers.
Valencia is a beautiful city, the Mestalla a unique stadium and the team play football as glorious as the Valencian sunshine. All of which means the city should be high on your list of places to visit and make sure you pack a scarf for Manolo. And a raincoat, just in case.


To see the goals click your mouse here.
Kenny Legg is the editor of Adventures in Tinpot. It's genuinely the work of an absolute genius.
You can follow both Kenny Legg and European Football Weekends on Twitter
- Feel free to comment below -
Posted by Danny Last at 10:20

Kenny attending a game that has more than 10 people watching... We are through the looking glass here people !

I didn't like it. It didn't feel right. I couldn't get tea in a mug and they wouldnt let me change ends at half time. Pah!

If I may be so bold as to comment again.

Multiple comments Kenny Legg? I like your style. This is a trick I often use to make it look as though the articles are really popular.

Damn it Danny Last, you've seen through my cunning