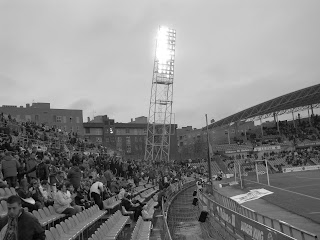 Getafe CF 1-0 Valladolid (03:01:10)
- click photos to enlarge image -
Like all good clubs, Getafe CF were formed by five blokes in a pub. Messrs Garcia (nimble fingered acoustic guitar plucker), Olavaria (bull-fighter), Lozana (castanet player), Vergara (tapas lover) and their (sangria drinking) cousin Miguel Frances announced the formation of the club in 1945 - yawned - and then made a further announcement that they were off for a siesta. Ole! Ole! Ole!

I wanted to seek out that very establishment, namely "La Marquesina" bar before this match. However, due to an over indulgent lunch in Alcorcón celebrating their fine win over Real Madrid Castilla earlier on in the day, I didn't have as long as I'd hoped to explore the countless delights that Getafe has to offer.

As it was, there was an eerie silence around the largely deserted streets around the Estadio Coliseum Alfonso Pérez an hour or so before kick off. It soon became apparent as to why this was. Match tickets were priced at €40, €60 and €80! There aren't many people around these parts who can afford such ludicrous prices. Hence Getafe have the worst support in La Liga in terms of numbers. Another case of mod€rn football eating itself. 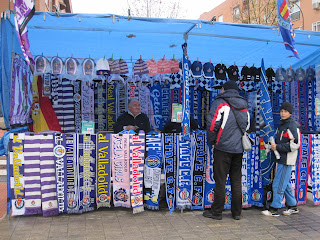 Got any scarves mate!? 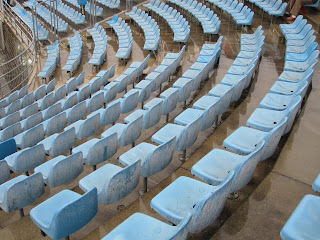 €40-€80 = empty seats.
After parting with €40 (what else could I do?) for the cheapest ticket, I thought I'd cheer myself up with a drink across the road from the ground. A "mini" of strong beer - which equates to roughly a pint and a half - was ordered in 'Al Pan Pans' bar, which was swiftly followed by another one. Well, I was on my holidays.

At the ticket office, I ran into a couple of old friends from Dortmund, Germany. They were over in Spain to watch BVB training (!) in Marbella (!), a six hour drive away (!). As you do. They weren't happy either with the price of the match tickets and were trying to plot a scheme to find a cheaper way to get in.

I'm not one to harp on about the actual match itself on these pages, which in this instance is just as well. 90 minutes of pretty average football was played out to a fairly mute crowd of around 8,000. It looked more fun in the away end as a small but merry band of Valladolid fans were amusing themselves. I tried to get in their section but my attempts were foiled by some bored security staff. 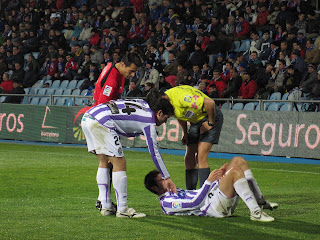 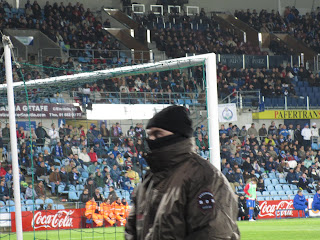 Alright mate. Bit cold are we!? 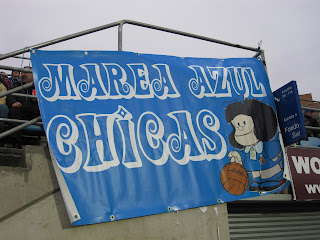 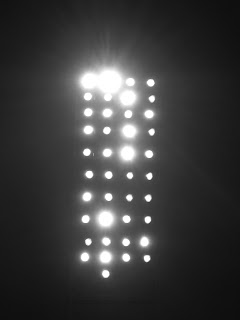 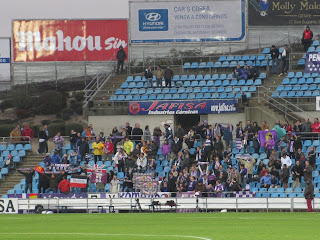 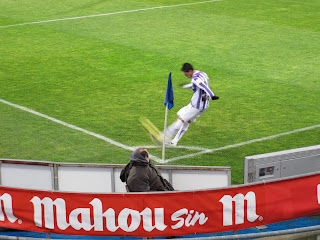 Rotund man enjoys close up of corner action.
Incredibly, for a Spanish game there was a disappointing amount of yellow cards dished out by the referee - only four. Sports newspaper Marca has a whole page dedicated to this very issue every Monday. They call it 'La Otra Liga' (the other league). Don't hold your breath though; goodie two shoes duo Barca and Real Madrid are top of that as well. In the Segunda Division over the same weekend; 96 yellow cards and 11 red cards were shown in just 11 matches. (good research dude - Ed).

The highlight of the match - aside from swinging a fast shoe to Franz Ferdinand, The Killers and Supergrass on the extremely loud PA at half time - came in the 82nd minute when Casquero headed in to give Getafe their first ever win in an opening match in a new calender year - EVER! 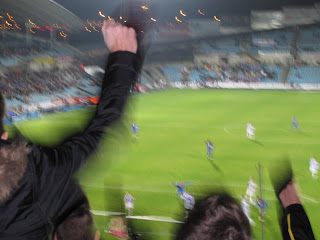 Gol!
Towards the end of the game, I caught up once more with the German lads. Word has it that if you hold your nerve - then a minute or so before kick off - €25 in the palm of the gateman sees you in, no questions asked. You ain't seen me right and let me get this straight: EFW does not (publicly) promote the idea of slipping someone a few quid on the quiet to gain cheaper entry into a ground.

So that was my Spanish EFW over with in terms of the football. Three matches in 19 hours, taking in Atletico Madrid, Alcorcón and this match. Afterwards, I headed back into central Madrid on the metro and celebrated my good work with a some fine wines and quality cheeses. Feliz Navidad and no mistake. 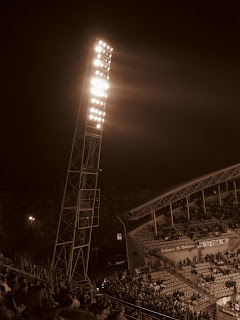 Season tickets are decent value but tickets for one off games in Spain can be ridiculously expensive, at all levels. I'm surprised there weren't any season-ticket holders lurking trying to offload spare passes for a fair price (say€20 on this occasion), there are usually a few around Mestalla and this is how I got into Riazor when I was there. I suppose they reckoned no neutral would be mad enough to want to go to Getafe-Valladolid!

Lol! Correct John. I did try and ask a couple of "socios" and they did try but by this time the ticket office were on to me as they'd already turned down my request for a press pass. They were going to issue me with a press pass until one bloke got twitchy and decided against it.

Anyway, its not me I feel sorry for - its the local people who just want to watch a bit of football for a reasonable price. Fair enough have your €80 prawn sandwich prices but you have to have a cheaper option, behind one of the goals say for around €20 maximum surely!?

…I KNOW England supporters had absolutely NO problems with Lampard’s goal being disallowed
….but in my naïve American way, I think it was disgraceful and might have made a difference…

how many go**amn England shots shook the crossbar? A few inches [or do u say centimeters?] lower might have seen a different result

…But I know England fans do not waste time thinking “what might have been”…or question ANY aspect of Capello’s tactics…!

….Go Paraguay!
(I hear the women there are amazing….including Forlan’s younger sister)…