Full steam ahead for The Iron 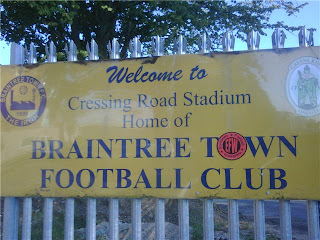 Braintree Town 3-0 Lewes (11::08:09)
Welcome back the beautiful (conference) south...and relax. Last Saturday there were cheesy grins all round on the terraces of the Dripping Pan, Lewes as we raised a glass to the previous seasons relegation. We toasted the return of beer on the terraces with a welcome pint of Harvey's whilst swinging a fast shoe to new Lewes anthem 'Hippipolla' by Sigor Ros. All was well in the world of EFW as we set out for another season of mirth and hilarity.

How to follow that 1-1 draw with Weymouth!? (not easy - Ed). Well, I was asked by Lewes FC to go and cover their first away game of the season at Braintree Town, Essex AND pen a 400 word match report for the official Lewes website along with the match day programme. A serious match report!? Moi!? Oh dear....this will end in tears.

The highlight of a hellish train journey across London and through Essex on the worlds hottest/most packed train was a glimpse of the new - soon to slightly underwhelm the world - Olympic Stadium which is beginning to take shape in Stratford. That aside it was a blessed relief to reach the clubhouse at Cressing Road and set about tackling a few pre-match beers with Cynical Dave and Big Deaks. Such was the enjoyment of the ale served up by Chrissy and Sharon behind the bar that my first three pints forgot to even touch the sides. Silly old beers. 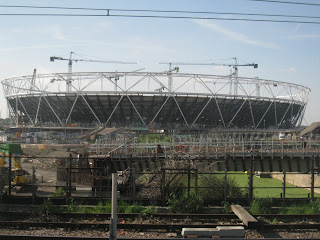 The new "soon to slightly underwhelm the world" Olympic Stadium. 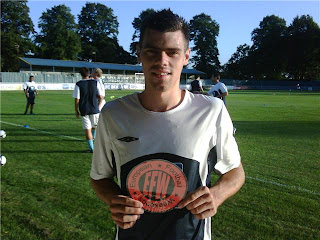 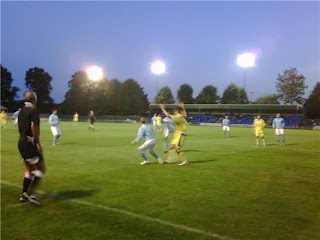 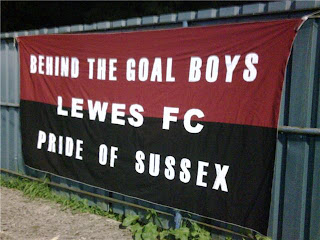 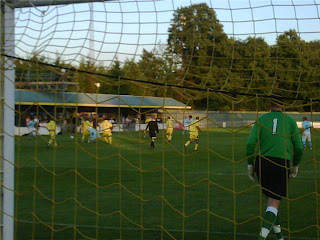 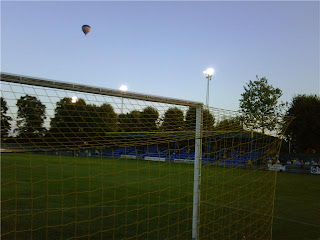 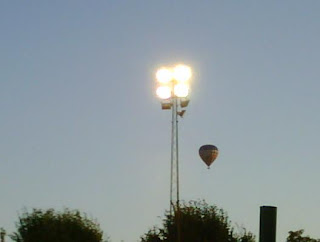 Hot air ballon with floodlight anyone!?

The BTFC clubhouse is an establishment that the EFW team will be returning to quite regularly. Why is that you ask? Well just get a load of the entertainment they've got lined up in the coming month: Fake That! Only the most sort after tribute band in the last two years. WE BE 40 who "win fans young and old every time they play." Beatlemania who - as one journalist put it - "If you closed your eyes you'd be hard pressed to tell the difference." Lastly, I give you Bernie the Rat Pack Man "I can't believe one man can impersonate so many of the great singers so convincingly! Truly amazing!" Monthly train season ticket to Braintree in the bag - tick.

Now for the downside of the evening. For a kick off, my camera broke. Secondly, there was a sign up in the aforementioned clubhouse bearing the less than legendary 'NO ALCOHOL TO BE TAKEN OUTSIDE OM MATCHDAYS' (ouch - Ed) and thirdly; Lewes got a thumping.

As we made our way home on our 3 hour journey back to Brighton, all we had for company was 12 cans of Kronenburg and 1284 discarded copies of the free London Lite newspaper.

Anyway, as I said, I was there in a semi-professional capacity in that I had to actually watch and report on the match for once. So here is the full version of the report I submitted to Lewes FC which will no doubt get edited down to a couple of sentences. Regular readers might want to end the reading of this report now as for once, I had to be serious. Oh well, here we go:

Full steam ahead for The Iron

Braintree Town moved to the summit of the Conference South last night after an emphatic home win against The Rooks on a sultry night in Essex.

After a hugely encouraging opening day performance against Weymouth on Saturday – where Lewes dominated for large periods – this was always going to be a trickier assignment. Lewes shuffled the pack with Dan Royce, Sam Fisk and Williams Peauroux making way for Ryan Storrie, Scott Chamberlin and Andrew Pearson.

The two teams trotted out to onto the pitch to a quick ten second burst of Kasabian on the tannoy system. Not bad but not a patch on the new Dripping Pan anthem – a full version, pumped out at volume 10 of ‘Hippipolla’ by Sigor Ros. Dreamy!

On a lush playing surface it was Braintree who started the brighter. On 9 minutes Andrew Pearson did well to block Tommy Tejan-Sie’s goal bound effort and minutes later Sean Marks flashed a header just wide from a Ryan Peters free kick.

The Iron took the lead after quarter of an hour through a piece of individual brilliance from the hugely impressive George Purcell. He burst into the Lewes box after evading two challenges before rounding keeper Rikki Banks and finishing with aplomb.

Lewes stuck to their passing game and galvanised by some neat trickery by the livewire David Wheeler they grew into the match. They had arguably their best spell just after the break. As the Rooks fans were still taking up their positions behind the goal, a combination of Sam Crabb, the (very tall) Braintree goalkeeper and a defender or two all pounced on the ball in a goalmouth scramble. The ball bounced up and off the crossbar, down onto the line and somehow declined to go in.

After that Braintree began to dominate with Matt Game showing some laudable enterprise in midfield and strikers Purcell and Marks showing flashes of awareness and touch which suggests their partnership could well bear fruit for The Iron this season.

Sean Marks it was who further extended the lead beating Banks to a ball that rebounded back off the post from his initial effort to smash it home - into the roof of the net - after 64 minutes.

On 73 minutes George Purcell rounded off a great night for both himself and The Iron by intercepting a tame back pass from the otherwise superb Chris Breach before rounding Banks and sending the home fans home happy with another neat finish.

These are exciting times to be a Braintree Town fan. Not only are they top of the table after a perfect start but plans are also afoot for their team to move into an new all singing, all dancing 6,000 capacity community stadium. Off the pitch at least Lewes FC has more immediate taxing issues. On it, they’ve assembled a team worthy of the shirt and well worth watching despite this hiccup.

Afterwards reflecting on the game Lewes boss Steve Ibbitson had no complaints:

“They were generally more aggressive than we were especially in midfield; they also had more options to keep the ball with two very mobile full backs. In addition they had two excellent front players who complimented each other very well. We struggled to contain them and couldn’t cut out the supply to them. A major lesson we must learn is that no team is going to just let you have the ball and we mustn’t just give it away cheaply as we did last night”.

Anyone still awake!? Thought not. For those of you with insomnia I'll just add an apology for the quality of the photos. I had to take them with my mobile phone.

These just in from Lewes legend Mr James Boyes: 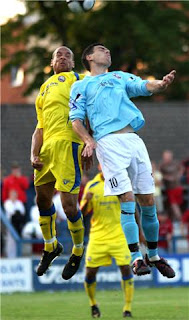 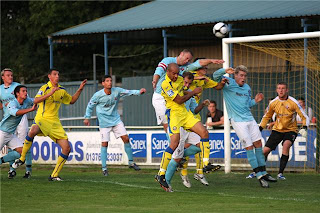 The Daddy! Skipper Danny Cullip wins yet another header. 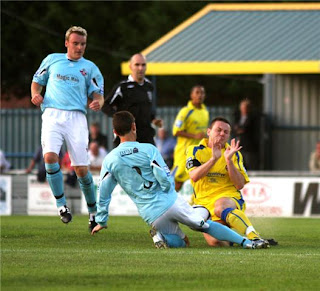 Credit crunch. Barney gets tucked into the Braintree skipper.

Oh go on then, I'll mention this comment that was sent to me today:

Best I have read for years

If that doesn't make it onto a future poster then nothing will!