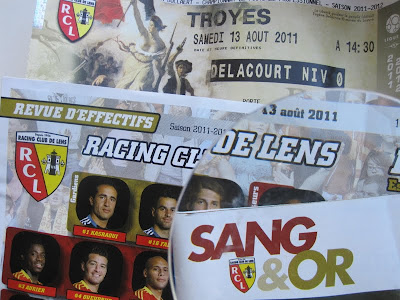 Life Thru a Lens
Lens 2-1 Troyes (13:08:11)
The second installment of a three-part French and Belgian European Football Weekend sees Danny Last taking over the baton from Andy Hudson....

There she blows - A headline that I've had jotted down in the EFW notebook for three years alongside a further scribble that reads: Get yourself to Racing Club de Lens quick sharp old chap; their fans are supposedly the best in France, worldly renown for showing a bit of la passion du foot.

That note was inked in during January of this year when I was sat on a coach travelling back from a Real Valladolid match watching the Dany Boon classic, Bienvenue chez les Ch'tis (Welcome To The Sticks). The film reduced my wife, and a bus full of Spaniards, to tears of joy. It peaked my interest when the hero of the film, Philippe Abrams is taken to a match at Lens. That was all the excuse I needed. I dialed up Stuart Fuller and Andy Hudson;  two lads whose chosen mission statement in life is 'We'll never say no to football again', and before you could say 'Up for The Cup' - we were booked up.

Actually, this game nearly didn't happen for us due to a late re-scheduling of the match for television - always a flatulent pain in the arse - but we rejigged a few hotel bookings, added a K.A.A. Gent here and sacked off a trip to Alemannia Aachen there - and Bob was pretty much our uncle after that.

Following a ye olde traditional 4am finish to the previous night in Amiens, Team EFW were a little fragile as we made our way to Lens. And it was hammering down with rain. But it takes more than that to get us in a mood when there's two games of football to be had, in one day, in two different countries. Hoot. Hell, not even France's most depressing service station, situated between Amiens and Lens on the A29, in which, one had to queue 25 minutes for a dry roll, and 30 more for the ladies toilets - which didn't best please Mr Fuller - could drag us down.

The Eiffel Tower, the vineyards of Bordeaux, the beach of Nice .... pffff .... pre-match in Lens is all about slags and a day on the piste. The most popular tourist attraction in town is a slag heap that's been turned into a dry ski slope. There were slag heaps as far as the naked eye could see, so bare that in mind if you're after a romantic place to take the wife away for the weekend. You can have that tip on me.

Of more immediate concern to me, as I was now standing in the clubs sizeable megastore, was remembering my French O-Level skills. I was on the lookout for a snazzy pair of RC Lens slippers, and my heart was obviously thumping through my chest with excitement. Thinking quickly, I piped up with "Où sont les Lens pantoufles, s'il vous plaît?" (where are the Lens slippers, if you please?). A beaming shop assistant pointed me in the right direction, next to the RC Lens alarm clocks, obviously, and I skipped out €10 lighter in the wallet department, and three inches wider in the cheesy grins dept. Best day of my life and all that .... 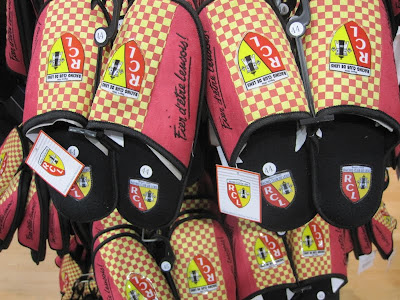 I'm going to look a right Bobby Dazzler slipping into these beauties. The best €10 I've spent for quite some time.
Outside the turnstiles we met up with our brothers from Royal Antwerp; Maarten, SuperHans and Pat. They'd already taken the trouble to procure our match tickets which, for €9 apiece, were pretty magnificent value don't you think? (Yes, I make you right on that - Ed.).

Inside, the quite brilliant Stade Félix Bollaert was rocking. A chap with Lens trousers - damn, I'd missed those in all the slippers excitement - was swirling a large flag around on the pitch, and we paused only briefly to applaud the away fans, something I'd never seen before, and quite a nice touch - especially as I'd heard a mini bus full of them had been surrounded by the local casuals just prior to kick off. There wasn't any actual trouble though. We then stood for the national anthem, no really. And then it was time for the real fans to kick in .... 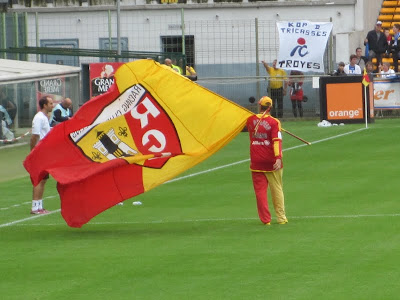 Note to self: Must purchase pair of Racing Club de Lens trousers 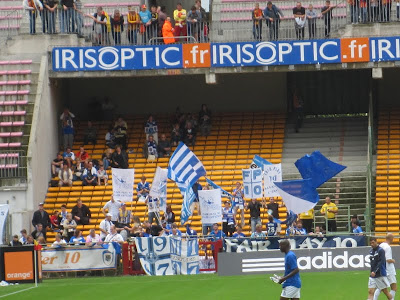 A round of applause for the travelling fans from Troyes, tick.
The ultras in the Tony Marek stand, which runs the length of the pitch on one side, where in full voice and colour - Sang and Or, obviously. They were relentless, and I immediately awarded a place in my coveted Top 5 of European football fans. Regular readers of EFW will know that when there are vociferous fans present, I struggle to watch any of the actual game preferring instead to cock an eye towards my new best friends bellowing out their anthems.

And what was all this? Works of art adding to the riot of colour? Yes sir. Giant canvases, the size of the proverbial bus, had been positioned inside the stadium. They looked like reproductions of famous masterpieces from The Louvre with an additional twist/theme in those famous clubs colours of blood and gold. Evidently, this was all part of the Louvre-Lens project which will see an extension of famous museum, in Paris built just behind the stadium - in Lens. Fairly do's. They looked great, actually. 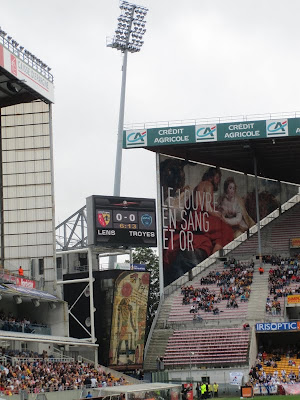 Did you see any art galleries on your EFW? Yes sir. Only one of the best in town....
With a provisional playing budget of around €20m - compared to that of €8m for the opposition, ES Troyes - you'd have expected Lens to dominate. And that they (sort of) did. They edged a fairly nervy first half before springing into life following the introduction of substitute, David Pollet. He smacked the home side in front, and celebrated by running towards Team EFW in the Delacourt Stand. Pierre Ducasse added a second in very similar fashion, before Troyes pulled one back, almost immediately, through Benjamin Psaume. After two opening defeats, Lens were finally able to climb up the Ligue 2 ladder. Hmmm ... Ligue 2 ladders, like in Shoot! Do they exist? Must investigate.

In France, there is a €15,000 fine, up to a year in prison and a five year stadium ban for entering the field of play. That's harsher than inciting a 'Facebook riot' .... that didn't happen so, with that in mind, we skipped the traditional post-match on the pitch photo and jumped back in the car instead. During a lengthy discussion, we decided that Racing Club de Lens were the Leeds United of France; a slightly fallen giant with tremendous fans and splendid old school ground. With that debate concluded we went, ahem, marching on together towards Gent for our second game of the day. Good old life. 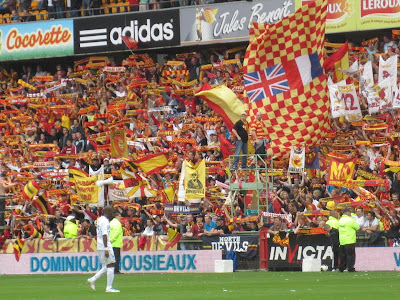 A few photos that I hope will capture some the magic of the Lens support..... 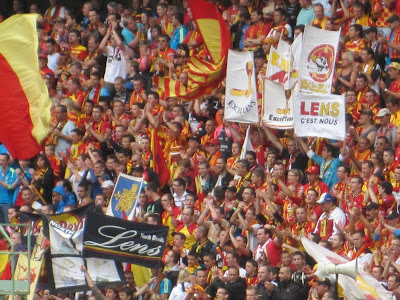 ....if you haven't been to the Stade Félix Bollaert, then sign up for a visit now. These chaps make it well worth the effort. 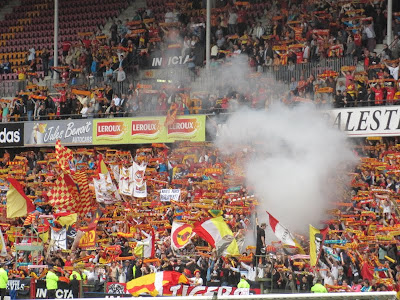 There's lots more photos from this game both HERE and THERE.


You want more photos of the Lens Ultras? Here you go.
Like this? The other best fans in France are at St Etienne. Here's the EFW report from our trip there.
Follow Andy Hudson and European Football Weekends and The Ball is Round on Twitter.
Next up .... tomorrow on EFW - K.A.A. Gent v Standard Liege
Posted by Danny Last at 11:25

A doff of the cap for the title sir. Looks like a new addition to the AiT wishlist.

Thanks Kenny Legg. If you don't enjoy your trip to RC Lens, I shall give you a full refund. It's brilliant.

I've just been pulled up on Twitter about the fans version of the 'national anthem' sung before each match. It's actually a modified version thereof, La Lensoise. And lucky old us, here's a YouTube video of it: