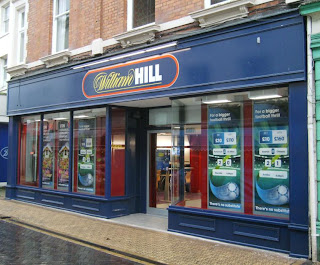 World Cup Willies
A man walks into a betting shop in Devon and places £3770 on Michael Dawson to score England's first goal against Algeria at 25/1. There is no punchline. It isn't a joke, it actually happened at a William Hill betting shop this week. Welcome to the mad world of betting, a game where everybody is bombastic about their chances but one in which few succeed.
Before European Football Weekends, I used to run a betting website called The Last Post. Famously we tipped up Tony David to win the BDO World Darts Championship at 100/1 in 2002. Less noteworthy was the fact we used to talk utter nonsense (no change there then - Ed.) and it sunk without trace. Gamblers only talk about the wins don't they? If they lose they say they broke even.
Anyway, enough balderdash for now. Let me introduce you to Graham Sharpe. He's the Media Director at William Hill and the man to talk to with regards to World Cup betting. Sharpe was kind enough to give EFW some of his time in between trousering some of our cash on our bet of Howard Webb to referee the World Cup final at 6/1. A headline of 'Worldwide Webb' in that instance is 1/33 so don't bother backing that:
For the uninitiated, what's your betting background and how did you get into this betting lark? I'm a journalist by trade who used to spend a lot of time in betting shops, so when I was changing newspapers over a quarter of a century ago I decided to work in a shop for a while - I'm still there now, really!
How much has been staked at William Hill for this World Cup? The World Cup is the biggest betting event of all - we've already seen a £200,000 accumulator on Group outcomes; £110,000 on France at 20/1 (run that one by me again - Ed.) and many more five figure bets as the turnover industry wide moves to exceed £1billion for the first time.
Who is your biggest liability? It will inevitably be England on the outright market because of the bias towards them in our shops.
Excuse us while we stifle our laughter. And what about online? It was looking like being Spain until their first match defeat.
Talking of the Spain, the Swiss victory against them must have warmed your cockles? We were delighted but a little concerned in case Spain go out as they do attract many neutrals to remain interested in the event.
And France not winning their group means you've trousered all the money of those favourite backers for the groups? France were not that popular pre-tournament as they have looked fragile for some while so that wasn't a great disaster for punters who had been dodging them.
You pulled the price on David James being keeper for the Algeria game before it was announced in the press. Do you have Fabio's mobile number on speed-dial? Just a well developed sense of self preservation when it comes to financial matters, which can often be a pointer to events which may or may not happen.
Is the price on England winning the World Cup artificial given that you are an English based bookmaker? It was at the start of the tournament but is now settling down in about the right place - fifth or sixth favourites. 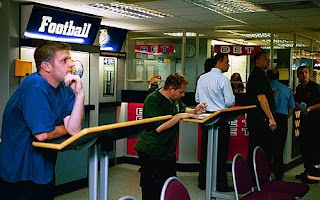 What do you reckon Bob? Fiver on Holland to win the World Cup or £3770 on Michael Dawson to score first against Algeria?
Has football overtaken horse racing in terms of volume of bets? No
Do any other sports come close to those two? Greyhounds.
Novelty bets: Do your head in or all good publicity? I started them back in the day and was the first bookie ever to refund stakes when I did so over the Maradona 'Hand of God goal' I created weather betting, reality tv betting (via Who Shot JR?) and 'Will my son grow up to play for England?' betting - so I love them, although some others go a little too far these days.
How much sport do you watch a week? I'm a Luton Town fan, so very little!
In the old days William Hill v Ladbrokes was the Real Madrid v Barcelona of the High Street. Is Betfair the biggest competitor in 2010? Who?
Here at EFW we call games like Sunderland v Bolton 'Tong Gubba games' (ie he is likely to be covering them for MOTD). How much of an increase in turnover do you see for a Tony Gubba game that's televised live rather than being played at 3pm on a Saturday afternoon? TV coverage is all important for turnover but you can't always guarantee that the 'glamour' games will produce the biggest turnovers - some high rolling punters prefer games in which big odds-on shots are involved and many punters find United v Chelsea almost too difficult to bet on.
Where were you when Frankie Dettori went through the card for his seven-in-row? Driving home from Kenilworth Road - I wrote a book, The Magnificent Seven, about that afternoon and it makes a fascinating story (yes, I would say that, I suppose) - as soon as I got home I got on the phone (no emailing in those days) and stayed there for forty eight hours as the story grew and grew - I told our punter Darren Yates he'd won over half a million - he'd thought he had 'a few grand' to come! Bookies LOST, not just paid out, LOST, almost £50m that afternoon - an industry was almost destabilised.
Why as a firm do you not price up games lower than the football conference? I am a former director of Ryman League club Wealdstone - our players earn peanuts. The possibility of pre-arranged results at that level of football is a factor in that decision. Also, at that level, information that just one key player is injured can entirely change the betting on a match - and we're the last to find out.
So can you give EFW a price on Lewes FC (our team) to win the Conference South in 2010/11? We're not up with prices for the division yet, I'm afraid.
Well that's saved us a small fortune. Thanks a million for taking the time to talk to EFW Graham. No problem.
Got any World Cup betting stories? Any betting stories at all?
- Feel free to comment below -
Posted by Danny Last at 09:01

My topical WC betting story is that I believed N.Anelka (FRA) to be so over-priced for top goalscorer at 66/1 I lumped on to the tune of £5(five).

Splendid Dave. It's not as if he'll be sent home from the French camp for foul and abusive language towards Raymond Domenech is it? I think that is a sound investment old chap.

Keep them winning tips coming in our kid. This time next year....

You may mock Danny but did you see his performances before this unfortunate incident? Shades of a young Just Fontaine for me.

I mock for a living Dave old chap. Sadly, I'm too young to have seen 'Justo' in action. I'm aware of his work though obviously.

For those who haven't already had the pleasure. Dave has his own blog which is well worth a look:

He is also thoroughly worth following on Twitter at: @DavesTVSports

I'll tell you of three of my many, Higuain to be top goalscorer, 25/1, all African teams to go out at the group stage, 15/1 and Serbia to be the best performing European team, 40/1. Serbia currently reminding me of why I'm reading the fix!

Inspired picks Mr Chambers. Is that the Declan Hill book? It's on my list of holiday bookingtons.

Hi Danny, yes it's the Declan Hill one, it left me a wee bit disappointed in terms of not chasing things down but I guess there was so much corruption uncovered that that was an impossibility and that he is hoping the people in charge of the game sort that stuff out.
In terms of my bets I must have been the only person not cheering on Ghana and I'm hoping that Higuain holds on to a top 3 finish and I can at least collect something out of it from my each way part.
I'm in Brighton so maybe once you've read the fix we could discuss it over a pint or two.

I had a very big bet on the world cup and it won!