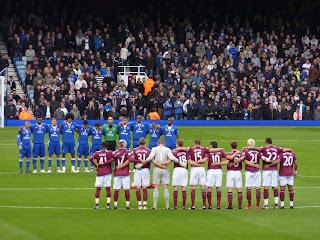 Any old Iron
West Ham 1-2 Everton (08:11:09)
- click on photos to enlarge image -
I best declare my hand early doors. This won't be the most informed article you'll ever read on a Premiership match. Since Sky Sports invented football in 1992, I've only been to two matches in the best league in the world*. Previously, I'd been to Aston Villa v Newcastle by default in 2002. We ended up there in a moment of weakness after the game we were heading to (Mansfield Town v Brighton) was postponed an hour before kick off. I'd also attended West Ham v Leeds United in 1997 as a guest of a friend.

The only Premiership news I digest each week comes either in the form of the excellent Football Weekly Podcast from the Guardian. That's both irreverent and funny - two things in life I find very agreeable. Also, I watch the odd Match of the Day through a pair of Saturday night beer goggles after an evening of celebrating another swash-buckling performance from Lewes FC.

I do have a bit of history with West Ham though. "Closet Hammer, Danny Boy" is how I'm usually greeted by my good friend Stevie Harper who lives and breathes West Ham. This is because in the days of Brooking, Neighbour, Pike, Parkes, Goddard, Stewart, John Lyall et al my old man used to take me to the odd game at the Bolyen Ground and *deep breath* I used to own a Hammers duvet and lampshade. 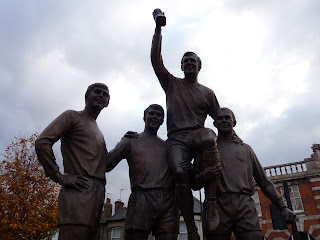 West Ham won us the World Cup you know...
Fast forwards to 2009 then and I found myself on the way to Upton Park again. Passport to Football's Stuart Fuller had invited me along to the Sunday afternoon (they don't play on Saturday's at 3pm in this league anymore) Super Sunday fixture against Everton.

These are two clubs in crisis par excellence. Everton in that they hadn't won in seven matches. A crisis is cemented in the eyes of the media as soon as one fan rings in the tedious 6-0-6 and demands changes. West Ham are a club in actual crisis. Their future remains uncertain because their Icelandic owners are struggling to find new investment. They've reported debts of between £40-50m and gaffer Zola has to sell rather than buy these days. Lewes were nearly wound up by the high court a few weeks ago because their debt totals £110,000! *scratches head*.

Premiership clubs are in bother because they pay their players such ridiculous wages. The gravy train of guaranteed sell outs has dried up. Fans are no longer prepared to pay silly prices (every week) to see mediocre fair and they've grown tired of paying a £5 surcharge on any item in the clubshop that carries their teams logo. Price of a toaster in the real world £35 - price of a toaster in the West Ham megastore (it was a caravan when I used to go) £45, although it does print 'WHU' into your toast. I brought one.

In fairness to West Ham they have cut the price of their season tickets by eight per cent for the 2009-10 season. This is because they simply had to. Tickets for their match with Liverpool recently could still be bought immediately before kick off. The culture of complacency is over for Premiership clubs as the chill wind of recession sweeps through the terraces...sorry padded seats.

So to refresh myself on the Irons, I read my host Stuart's 10 things that few people ever knew about the club article and safe in the knowledge that the Everton changing room would only have 10 showers, I set about finding the man himself for a pre-match bevington. What could be more 'West Ham' than a pub on the Barking Road, Plaistow painted claret and blue and bedecked in Hammers memorabilia? That pub was The Castle, formerly the local of darts legend Bobby George.
Stuart brought along his daughter 'Lolly' who - despite her tender years - is already a regular at Upton Park. In the pub, we were approached by an Irishman who was the size of a bus, as I desperately tried to look inconspicuous, he said to Lolly "Are you a West Ham fan, are you going to the match, will you do me a favour, here is £10 buy yourself a Hammers hat". And, with that, he was gone. Welcome to the East End. 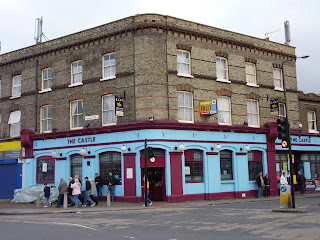 Pre-match drinks in the Castle - tick. 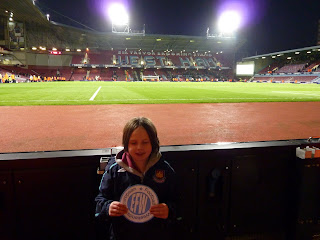 Lolly in the lolly.
The conversation soon turned to Everton gaffer David Moyes. I think he is a top man but he has tested that theory recently with his outlandish comments. Managers who get under achieving teams into Europa League and then moan, moan, moan about their being too many games would be my first entry into Room 101. Get on with it Moyes, shame on you. Shame on you. 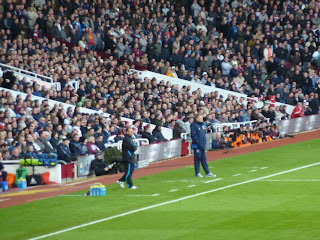 Zola looks on at a grumpy Moyes. Working twice in a week? Whatever next? 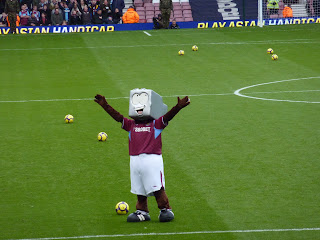 This chap looks hammered - stewards.
Up until a couple of weeks ago, West Ham's cupboard had been pretty bare. This season they've been rudderless, acquired a leaky defence and it had generally been all doom and gloom. Then, they picked up a point at home to Arsenal, outplayed Sunderland and with the last kick of the previous match had beaten Aston Villa. Two news Hammers idols had also been born. Zavon Hines had come through the academy and had impressed and furthermore, Katy Perry had graced the MTV awards sporting a West Ham basque. Reasons to be cheerful - at last. 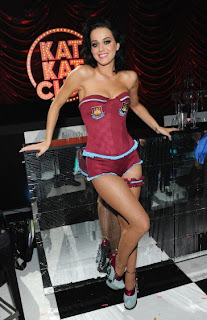 Reasons to be cheerful - part 1. 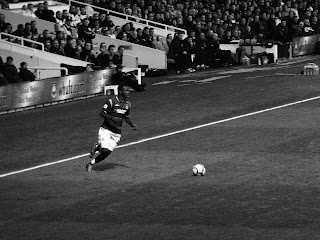 Zavon Hines. Reasons to be cheerful - Part 2.
West Ham know how to recognize their heroes. You're left in no doubt after a visit to Upton Park that Bobby Moore and Sir Trevor Brooking played for the club. There are statues, stands named after them, enormous billboards and you can even tuck into "Bobby's Bites" at half time. Bobby and Sir Trevor are all over the place like a cheap suit. 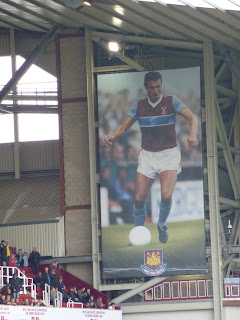 Sir Trevor (minus his Avco Trust). 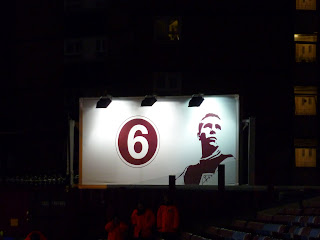 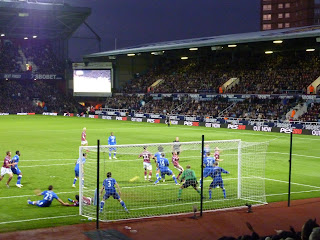 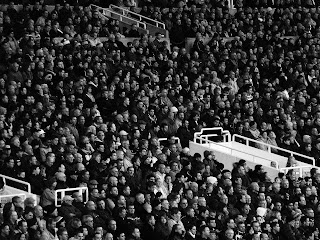 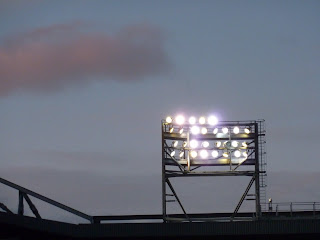 Hello to you!
You don't need me to talk about the match. With this being a Premier League match everybody can tell you what happened. If you must, you can read about it here, there and every chuffing where. I can tell you this though; even the most blue-nosed Everton fan and happiest Hammer will concede that the match was played out in an atmosphere that was as flat as the £3.50 pints of Carlsberg on offer.
Fellaini is a chap worthy of note. You can't stop looking at his amazing hairdo. Not only that, he is enormous. Put a large wig on that Russian boxer Nikolay Vauev and it could be him. He is that big. That said, I'd love him in my team. A note is in the post to Mr Moyes; stop moaning, save us from desperate/tedious tactics in matches - I don't care if you won, people have paid £41 for restricted view tickets for this game, oh and can you send Fellaini to Lewes for six months please old chap!? 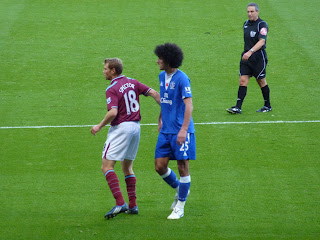 The ref checks out Fellaini's behind.
Back in the Castle afterwards (we had to let the crowd die down was our fairly lame excuse) and another 'character' made his presence known. "You lads look like you know a bargain when you see one, I can't say fairer than 5 notes for this HOGO (HOGO!) BOSS aftershave now can I". Frankly, that stank. Funny though.
So in conclusion, I enjoyed my day in the East End. However, in terms of going to a Premier League match every week - no thanks. Fans can pay around £40 a ticket and not even get to change ends at half-time! What's all that about. Back to the Conference South next week for me. See you at Eastleigh. 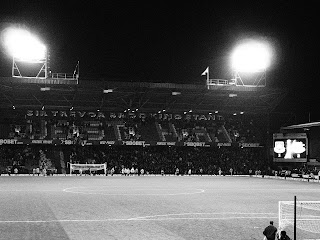 I'm not to sure Fellas' (Fellaini) would like it to much down at the Dripping Pan he'd be lost, as would the rest of our mostly (not fully) pre maddona squad.

How was the support? I went to Fulham away earlier in the season and the Everton fans weren't great could only be described by a Non leaguer as 'airmchair supporter's ', similar turn out today? Almost Identically West Ham sing that very famous old tune ' I'm forever blowing bubbles...' and then pipe down again pretty quickly.

I just had a look at the ticket prices and I agree with the gist of what your saying, ticket prices are way too high, £20 for an under 16 where as Lewes just a fiver!

Nothing wrong with Upton Park - we are seeing an average of over 3 goals per game. However the money in the Premier League now means few teams come to us and actually want to win despite the fact we are pants and so we rarely see value for money in terms of an attractive game. Would I give up my season ticket? Not at all. I like Blue Square games for the friendliness of the fans, the freedom but West Ham are my team...

The Everton fans were fairly mute. I was up the other to where they were seated though, so it may have felt different from their perspective.

West Ham fans chipped in from time-to-time with a few songs (other than Bubbles) but it was a Sunday afternoon in fairness - not too conducive to getting excited about football.

Non-league football appears to be full of fans who used to frequent Premiership/football league matches and are now patting themselves on the back for making the change. From being told what to do, they are now free, to do what they want - any old time. And with £30 more in their pocket afterwards, they have enough for the BFH (bus fare home) to boot.

I saw this match live and it was quite a good game of football!!!