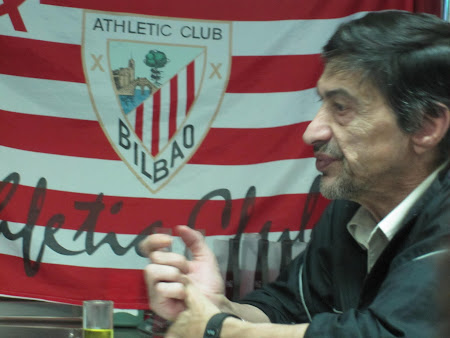 In recent times I’ve been sent to the glamorous stadia of Curzon Ashton, Mansfield and Morecambe, but I haven’t felt the intrigue and excitement that I did when I wandered along the Nervion River into Sestao. This feeling escaped me for a few minutes as my companion, James and I realised we had little to no idea where we were heading. We took the usual course of action at this point and made a hazardous guess at the direction of the ground and then follow a man in suitably coloured attire in order to find the exact location of the ground.

When we finally stumbled across a man in Sestao green we quickly got into stealth mode as we took our position ten yards behind him down the main street of this disappointing industrial town on the outskirts of Bilbao. After a few detours to bars along the way we finally made it to the ground an hour before kick-off. At the turnstile my friend paid his 15 euros for a small green paper ticket whereas I decided to chance my arm and whipped out my press pass and made a successful attempt to get into free. 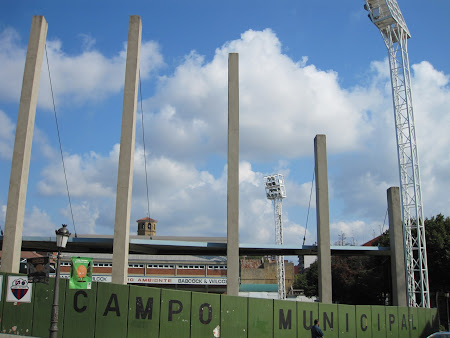 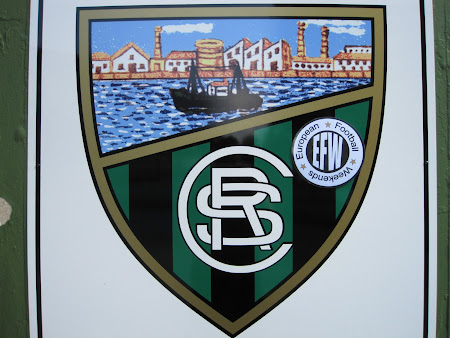 A match made in heaven.
The fun began now, as we found our way to the bar where we enjoyed cheap beer and some reasonably priced, and tasty pintxos (small Basque tapas); a nice bit of tortilla and chorizo was eaten as a pre-match snack. We set ourselves up in the one seated stand in order to enjoy our food. I had a quick review of the press box, which was situated in the corner and then checked the teamsheets that were taped to the wall. The entertainment began in the warm-up as the ball was continuously kicked over the wall and an elderly man was sent to slowly fetch from the flats on the other side. However, when the music came on I was alarmed to have my ears tortured by the mid-90s classic ‘Glory Glory Man Utd’, it was a bizarre setting for a terrible song to celebrate a decent team.

Before the match started we moved over to the terracing on the other side to join the more vocal supporters including a drunk man and his wife who drank more than teenagers in a Mancunian park on a Friday night. The ultras had their array of flags flying behind the goal including a Che Guevara image. It also gave us a great view of the ageing members of the population sat opposite, as the younger fans got fired up, by that I mean they got drunker and more stoned.

The opposition, local rivals Portugalete,  brought few fans which was disappointing considering it was only a 20 minute walk. As we settled in and the match kicked off it was obvious that the pitch wasn’t great and that the home side were by far the superior team. After a few chances and many more chants Sestao broke the deadlock through an Isaac Aketxe goal. Like most on the pitch, he had been rejected by Athletic Bilbao and showed a lot of natural ability in taking his opening goal. Another was added before half time, and then more alcohol and food was collected from the bar on this side of the ground. 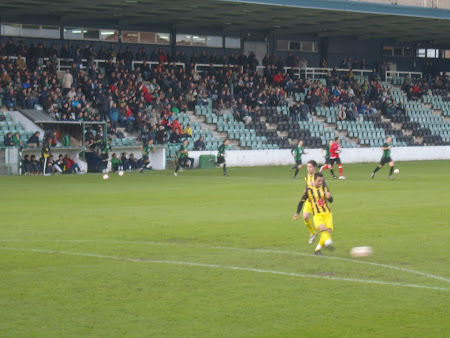 This will be our entry for the 2011 Young (ish) Sports Photographer of the Year Competition.
Two more strikes followed as the home side routed the disappointing visitors. Our nearby companions were now dancing whilst lying on the floor as the overwhelming stench of cannabis took over the terracing as local youngsters enjoyed their victory against their local rivals. Songs rang out at the same pace as the rain pelted down for the entire half. As the end came, my companion and I moved around the ground in anticipation of our next match of the day in two hours at San Mames.

Having lived in Bilbao for a year, a trip to Athletic’s stadium the San Mames is nothing new to me. However, having not visited the city since leaving it 18 months ago, it was quite a special occasion attending their match against Valencia. When me and my friend James booked the trip, we deliberately made sure it coincided with a big match.

In order to a) save money and b) have a different matchday experience I applied for a press ticket, which I was granted, as was my friend James. We picked up our passes beforehand, (my name was spelt correctly, James’ was not as his surname Brewis became Brewing), and then went to a bar next to the ground based on the fact it was named after one of our favourite players Fernando Amorebieta. We grabbed a quick drink and an undercooked pork sandwich.

Finding the press lounge was a less interesting experience than one may expect having seen it on the guided tour the previous day. However, it deserves some mention as it is a huge space, but far less fascinating than those you find in the Premier League, mainly as it doesn’t offer free food or booze.

Our seats were in the ‘visitors’ press box, which consisted mainly of chancers like ourselves and some Japanese journalists who seemed to be making a bizarre video about their day at the match. I am reasonably sure that we will be on Japanese TV sometime soon, but I won’t be watching.

The atmosphere at La Catedral is always great, as unlike many Spanish grounds the fans are right on top of the pitch, and therefore closer to the action. They are some of the most passionate supporters who follow a team with a unique history. Admittedly, this ‘only playing Basques’ policy is a touch fuzzy nowadays with it being continually adjusted to allow quality players to wear the red and white of Athletic. 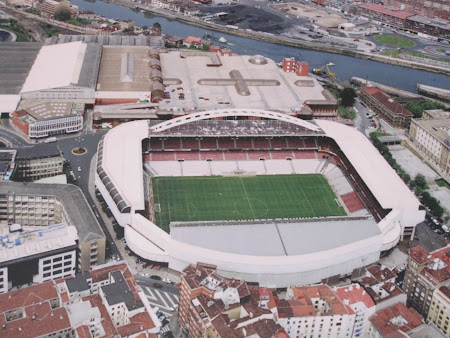 The most popular Catedral in the Basque country 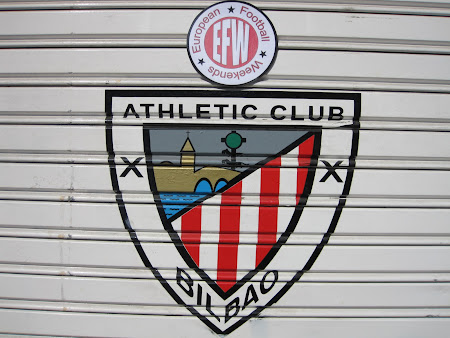 EFW were on top of things, as per usual
There was a lot to cheer about in the opening stages of the match as Gaizka Toquero and Iker Muniain ripped through the Valencia defence setting up a plethora of chances for their talisman Fernando Llorente. The goal quickly came after some good footwork from the World Cup winner before slotting the ball home. However, his game was overshadowed by his head being the target for David Navarro’s elbow which caused Llorente’s crown to develop an open wound. You may remember Navarro from a melee against Inter a few years ago where he kicked an opposition player after the final whistle.

By this point the fans were baying for blood as players clashed ferociously. Sadly, the Athletic team were getting rapidly more tired as the second half dragged on; Valencia got back into the match and quickly scored two goals to take the lead, to which the home side had little to no response. 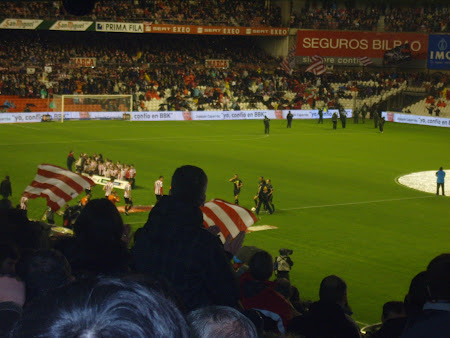 A quick heads up for the view from the press box
Post-match allowed another interesting experience of seeing how a press conference works in Spain. First we got Unai Emery and his overweight press officer, who spent most of his time looking slick without saying anything of note, apart from defending the filthy Navarro. Some casual Caparros banter followed before Llorente and Toquero were put in front of the press. Neither wanted to be there, but the latter was asked if he was gaining a reputation for being a real footballer rather than a man who just ran around a lot. Enjoyment was had by all his fans.

In summary, a good day was had by all. Made a change from the Preferencia Sur, and was a little bit more special in the knowledge it would be a long time before we would be able to go back. 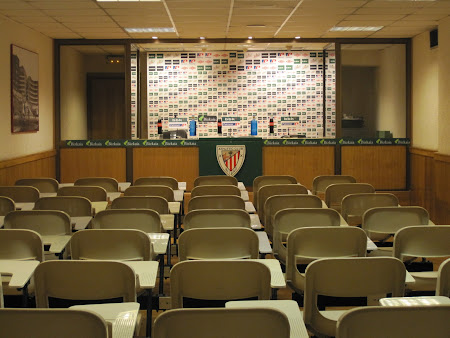 Yeah, one more question; I'd just like to ask Toquero, oh. 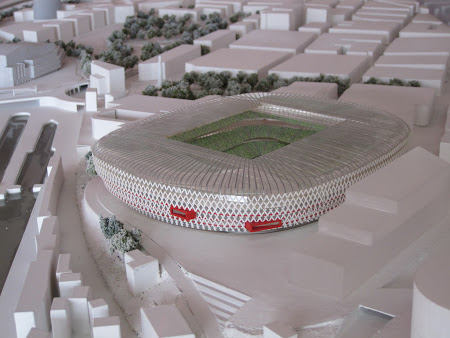 Sadly, or not depending on your view, the end is nigh for San Mames. This is currently being built next door.

nice piece. inspired me to post my own experience of basque football a few years ago. recreativo is no valencia but there's no mistaking the atmosphere at the cathederal. make sure you go there before they shut it down.