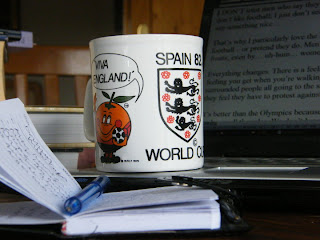 That’s why I particularly love the World Cup. Every four years everybody has to like football – or pretend they do. Men who say they don’t like football are rebuked on all fronts, even by… uh-hum… women.

Everything changes. There is a feeling of togetherness wherever you go like the feeling you get when you’re walking to your home team’s ground, in your home town surrounded people all going to the same place and all wearing the same colour (unless they feel they have to protest against colonising Americans/Thais/Icelanders).

It’s better than the Olympics because, here in England, we know about football and we know all the rules. We don’t have to Google “skeleton bob” or “fencing points system”. My favourite image of Germany 06 was Al Murray, The Pub Landlord, clutching a replica of the trophy with a little plaque on it reading: “It was our idea.”

Even if it’s for the wrong reasons, everyone pays attention to football and we’re all reduced (surely elevated? - Ed.) to flag-waving, leisurewear-fixated neo-chavs while the thoughts of Alan Hansen become more relevant than those of David Cameron (Mark Lawrenson remains less pertinent than Nick Clegg, though).

Football gets the respect it deserves during the Coupe du Monde. In my view, sport generally, and “soccer” in particular, has prevented many a war… and started at least one (in Honduras, I think it was)…

For most of the last few tournaments, I was fortunate enough to work at a newspaper with a sports-addled editor. This was in Ipswich, a town I describe to people around the world by first asking them: “Do you follow football?” (…no, not: “Do you follow serial killers?”).

Such was the editor’s football mentalism I was able settle into a role that allowed me devote every Tuesday to drinking with the sports desk hacks and lead one new guy to tell me that for the first few months he’d thought my job was “to watch Sky TV on the sports desk telly”. Even if England weren’t in it, there was usually a Town player knocking around the World Cup somewhere. I remember massed newsroom celebrations when Boncho Guenchev scored a penalty for Bulgaria in USA 94.

But it was Japorea 02 and David Beckham which together led to my most dubious achievement in journalism – knocking out two high-profile sports pages after a five-pint breakfast.

As a morning newspaper (which is made in the afternoon and night) absenteeism hadn’t been a huge problem for this particular tournament. But the early morning matches combined with Ipswich magistrates’ open-minded approach to the licensing laws and an existing cast of tired and emotional hacks were a heady cocktail.

So it came to pass that there was something of an extended pre-match build-up and – using the imagination that has won England fans friends across the globe – much of this was spent standing and drinking, drinking and standing (we were too late to get seats). And while The Case Is Altered – an ITFC/Newcastle United pub much further out of the centrum – laid on a slap-up full English for the Japorea morning games, there was little at The Plough to soak up the ale.

(The Case later went downhill when a Terry Tibbs character turned it into a karaoke bar – but it will always have a place in my heart as the location of my bearing witness to Germany 1 England 5, an epic, gonzo night during which the pub’s whist team pig-headedly played on while hundreds lurched and screeched around them.)

Fewer pints were consumed during “England-Argentina: The Re-Match”, but some beer was called for – mainly to steady the nerves. I saw a new side of the co-worker pals there with me. A Millwall boy and a Pompey fan, they had ditched their usually cheerful badinage in favour of barely concealed skittishness as both openly confessed to wanting a victory by any means; just scraping it if need be, no finesse necessary.

I, strangely, was in a state of grace. I had no doubt that we would win; God knows why. And despite being only vaguely aware I had to do some work post-match, I made but a token effort at maintaining sobriety.

Beckham’s penalty success did little to relieve the tension and when it was all over and the doors finally unlocked my old mates seemed to have aged significantly. But after a respectful period of disbelief, a bravura mood of celebration took over as we staggered back across the bus station and into the newsroom.

Quite reasonably, I thought, I was ready for a bit of a nap in an outer office. Imagine my horror, then, when the editor hove into view, clearly excitable and, like us, rather worse for wear: “OK, I want you to do the back and Page 56 – England page-lead and the quotes piece et cetera…” With that, he wobbled away as I tried to recall how to switch on my PC.

The upside was that the deadline was a good nine hours away, the downside was the fact that my screen appeared to be undulating. I set about creating a cut-out of Beckham while mainlining caffeine. Confidence was high after I manage to keep my stand-alone Becks away from the Edward Scissorhands end of the cut-out spectrum.

Page design I can do using the same part of the brain that controls automatic functions such as breathing and burping, but correcting text is a different matter. I was re-reading the copy for the seventh time when the editor blundered back.

I reacted to his peering over my shoulder with: “Yeah, I’m just searching for the perfect heading. Something timeless; something reflecting the occasion… I’ll float it across six columns over the main pic… I was thinking maybe just: ‘We win!’”

with regard to football matches starting wars isnt it said that a game between red star belgrade and dinamo zagreb (back in the old days when they were all part of Yugoslavia)helped to start the war between serbia and croatia.
the match did not take place due to a huge riot in the stadium before kick off.
i remember the famous incident where boban did a karate kick at one of the serbian police gaurds.Things got so bad that they had to get helicopters to bring the serb gaurds away.
Mark Whelan